The Iris, the Orris Root, & Firenze

Digging iris, rooting them, I remember that, as a child — the scent of sliced iris rhizomes, cut and seeping fragrance, as they came to the warm soil out of the cool earth beneath. 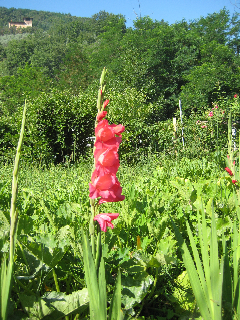 There’s a history of the fleur de lys and the relationship to Firenze. I’d presumed, for long, that this flower was for the French, as a symbolic device of royalty. 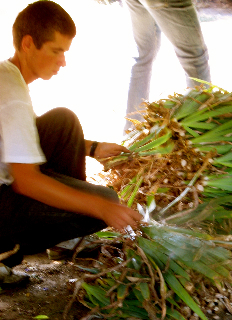 And more still, I knew nothing about the scent of the iris. But I grew up with them, in a working manner that’s not too far from this workman’s evidence. 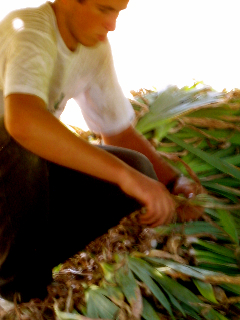 There is a harvesting, pulling the bulbs, roughly — and they still live on. They grow like bamboo. Invasive, ranging, clumping, clotting garden ways, as they fill out and fill in the space of available terrain. And beautiful in the energy of their profusion.

The orris root, the bulb, are culled like potatoes, which is where entirely the scent comes from. But only after time and effort — and about 4 years of maturity.

Gathered with a two-tined hoe… 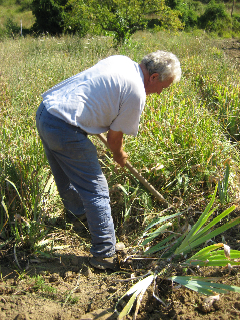 The bulbs are gathered and sorted. 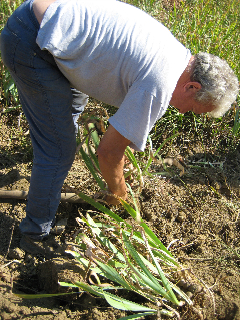 Separating the bulbs, for health and preparation… 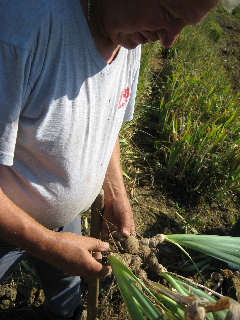 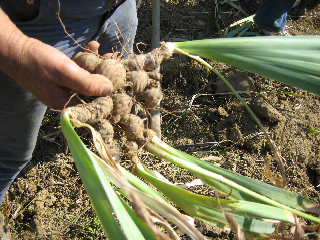 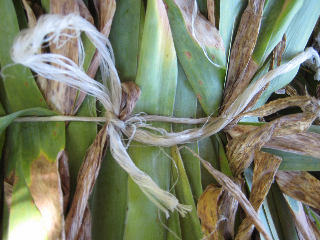 The tools for the preparation of the bulbs — to be washed, trimmed and sorted. 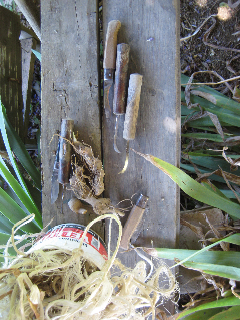 Using tools like these, they become like this, sliced, trimmed and the tendrils and rootlets removed. And shaved and shaped, either into the raw materials for orris root powder. 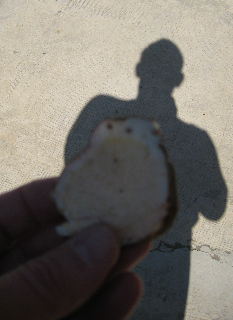 What facts, to learning more? For one, if you chew it, there’s a kind of biting even slightly anaesthetic quality — and apparently, part of that relates to the why the Germans savor this as a root for teething babies. Seriously strange, but true. With my gnawing on the root, I really can’t visualize a baby with one of these gnarled mandrakes in its mouth. 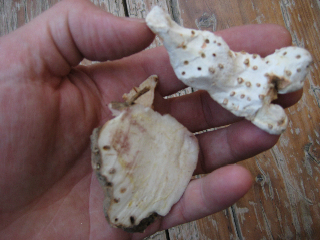 Botanically, according to MountainRose Herbs:
“The orris is a group of two species of European iris, cultivated in the region near Florence and sold as “ghiaggiuolo.” 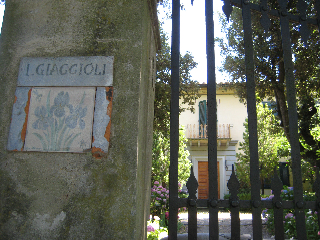 The rhizomes, resembling ginger, are dug up in August, stripped of their rootlets and bark, and then dried until they have a chalky appearance.

Dried orris root smells like violets. It is used primarily as a base for natural toothpastes, and as a fixative in perfumes to enhance other aromas.

Powdered orris root lends a pleasant scent to freshly laundered linens and to potpourri. It also can be used as a snuff to relieve sinus headache and as a stabilizer in cosmetics.

Orris root is extremely “puckery” if chewed fresh. It must be dried to be palatable. Drying also concentrates its aromatic essential oils.”

Fabienne Pavia offers more:
“L’univers des Parfums (1995, ed. Solar), states that in the manufacturing of perfumes using orris, the scent of the iris root differs from that of the flower. After preparation the scent is reminiscent of the smell of violets. This unique smell only wins over time in the drying process. After the drying process the root is ground, dissolved in water and then distilled. One ton of iris root produces two kilos of extremely expensive essential oil. It has been described as tenaciously flowery, heavy and woody.”

Yet again, I have a distant scent recollection of this — particularly the digging — the fumes rise to meet me. And being the earthen, dirty root-based scent phrasing lover that I am, I already live, in that space — dirty violets, roots, earth and smoke.

Within minutes of arriving at the Chianti region Iris farm, all three scents played, recalling distant memories, of rooting irises with my parents, as the flowers clotted like bamboo, along the side of the house.

After learning of the Florentine link to the iris, I then saw it everywhere, emblazoned for the “comune“. 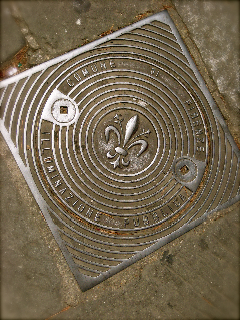 Eau D'Italie | The Scent of Blood

Exploring scent with Hoteliers and Perfumers Sebastián Alvarez Murena and Marina Sersale. Foto by Dawn Clark, AIA Imagine the idea of creating a scent that captures the spirit of your hotel. Or of your life. Your hotel: decades old - lying, heated in the brilliant coastal sun, facing the azure sea, just off the winds…

Exploring the renaissance mind of Lorenzo Villoresi: Scholarship, legacy and the genetics of exploration -- a history of fragrance creativity. Sometimes you find a person that seems like someone you've encountered before. Perhaps in another life, another journey, another time, another culture. A dream, perchance. In the writings of Jorges Luis Borges, the autobiographical meanderings…
We use cookies on our website to give you the best experience on our website. By clicking “Accept”, you consent to the use of ALL the cookies.
Do not sell my personal information.
Cookie SettingsAccept
Manage consent