BREATHING TIME: STUDIES IN THE TITLING DESIGN OF MARY QUEEN OF SCOTS. 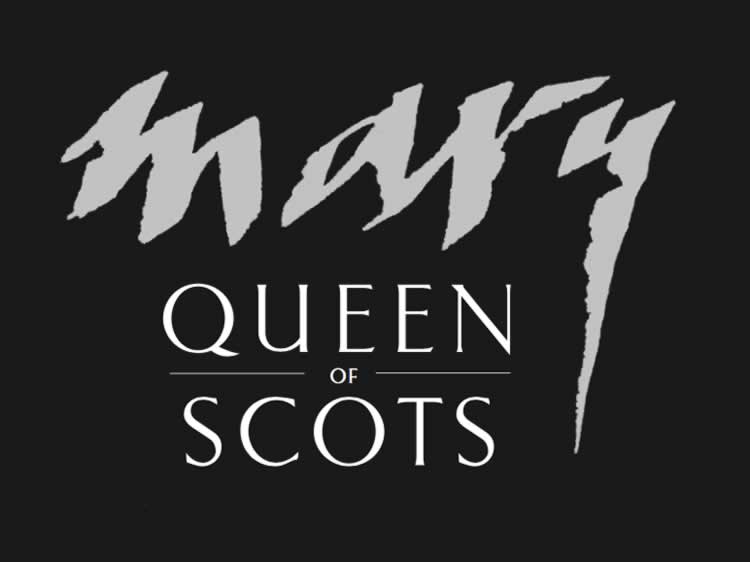 IN THE SCHOLARLY WALK-BACK IN DESIGN TIME, COULDN’T YOU LOOK INTO THE SCRIPTED CALLIGRAPHY OF A TIME OF CENTURIES BEFORE? YOU SHALL STUDY THAT WHICH EXHALED LIFE INTO THE WRITTEN NOTATIONS OF MARY STUART’S ASTONISHING LIFE.

You could go back.

To go forward,
look back, but don’t stare. 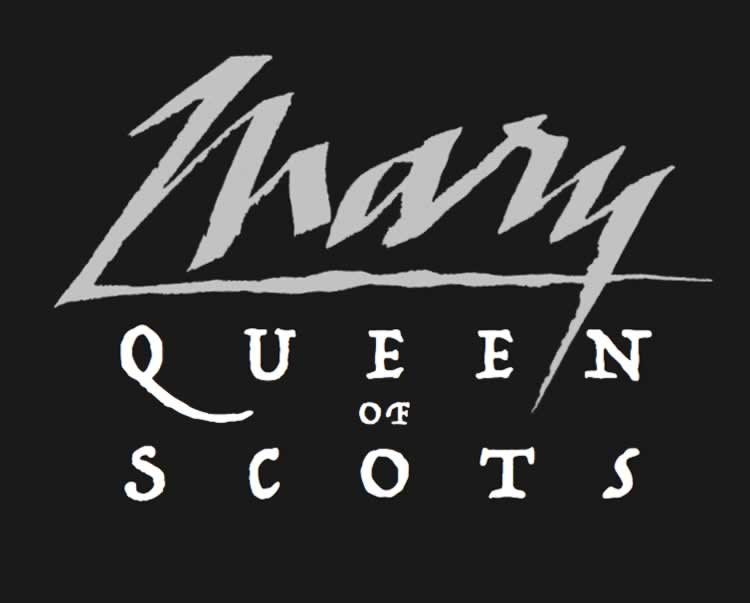 IN our work as titling designers, it’s just that—the notion of breathing time—and you could be seeking the breath of a time, from hundreds of years ago — or years into the future. Teaching calligraphy, I’m trying to take my students, team-members at GIRVIN, back in time, to breathe in the drawing of forms from hundreds of years ago. Drawing them in, like an inhalation, takes the student back in time, since you’re drawing of the breath of those that lived then. 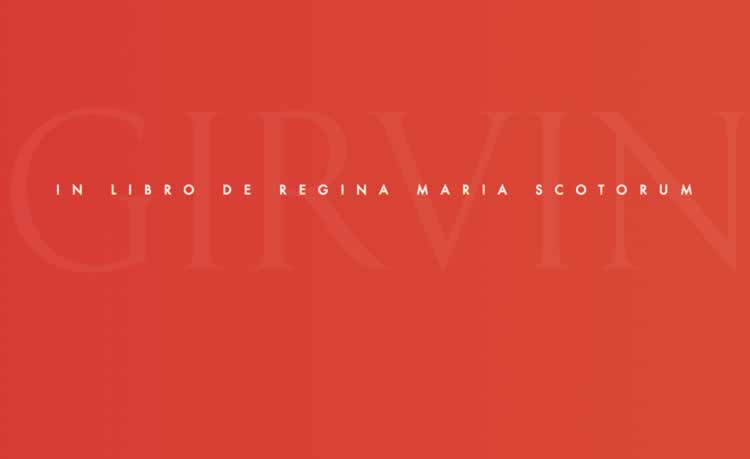 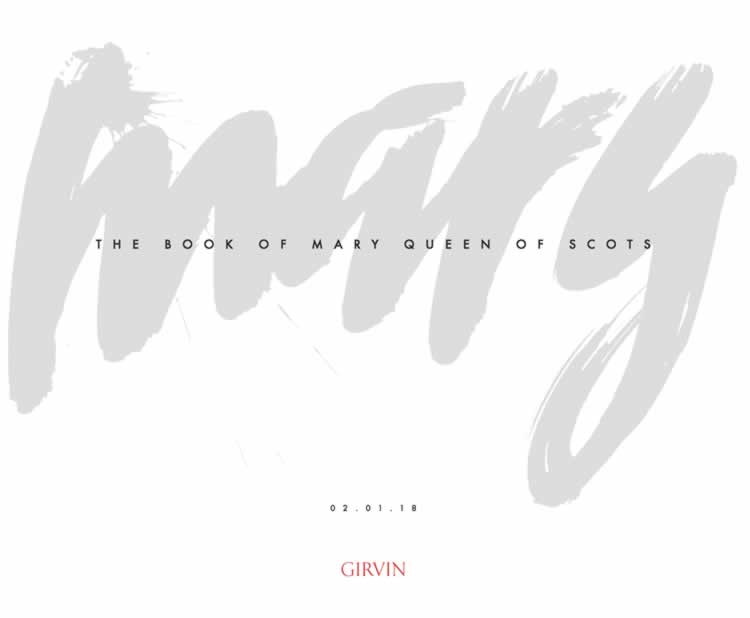 it’s the journey in[side,] the reading of the team—talking, listening, connecting, inquiring ideas and inspirations, the director, producer, production teams, actors, actresses—and there is the study of the language, the paleography, the art, literature, architecture.

It’s not just the story, it’s
the sensation
around the story.

What you see and hear,
lends itself to what you sense
as a holistic expansion—
the touch, the taste, the scent.

I start with
the voicing before.
Which is: 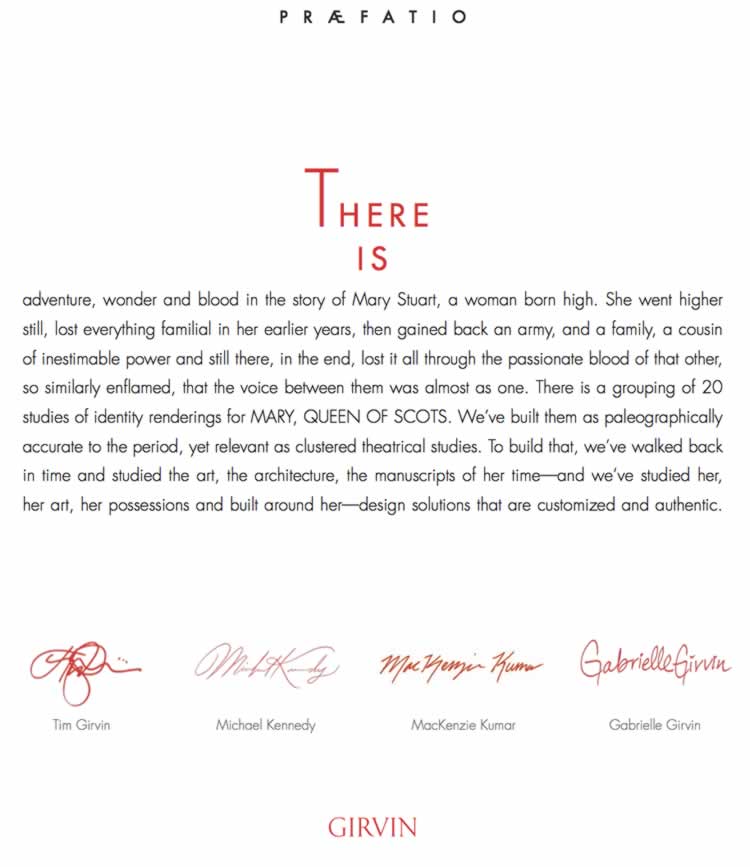 Talking to the cinematographers, I can see the grain of the visualization.

Meeting with the agency people, I can see the opening pitch angles for the film.

I can read the script—onsite, locked down, secure in the sharing. 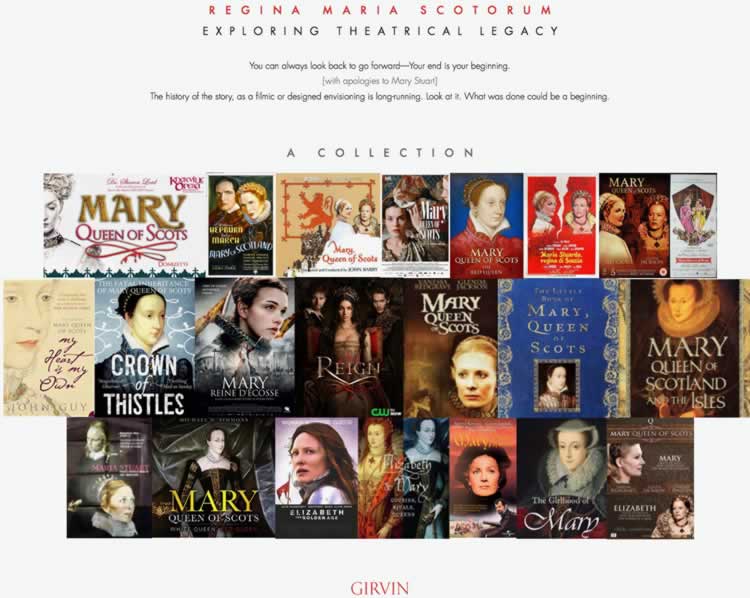 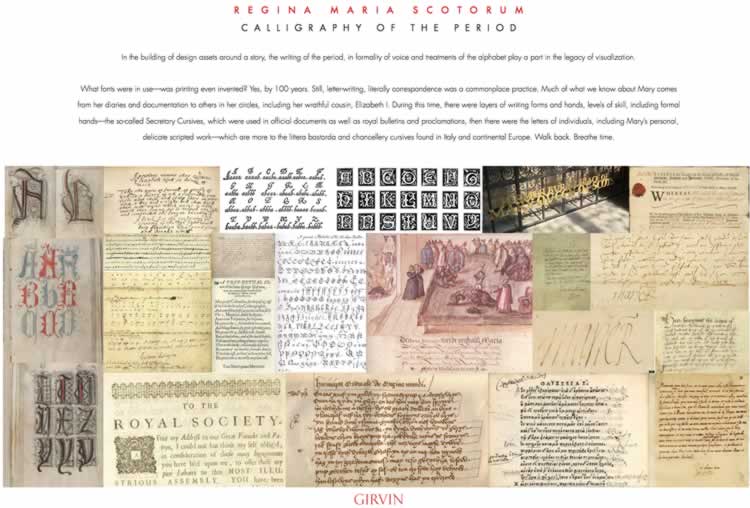 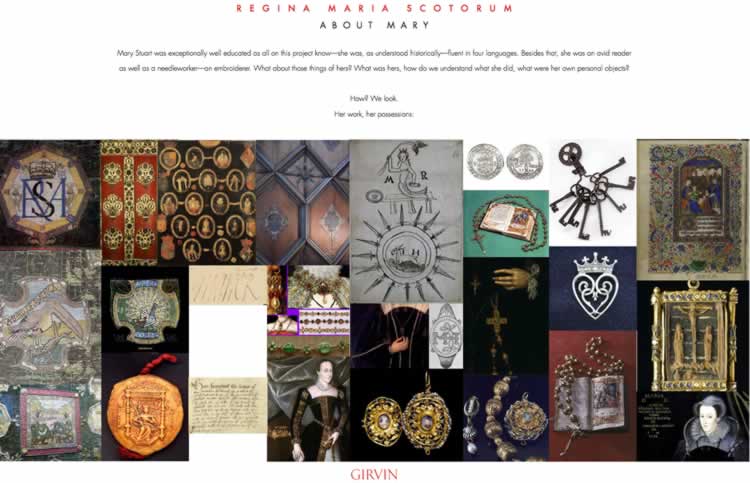 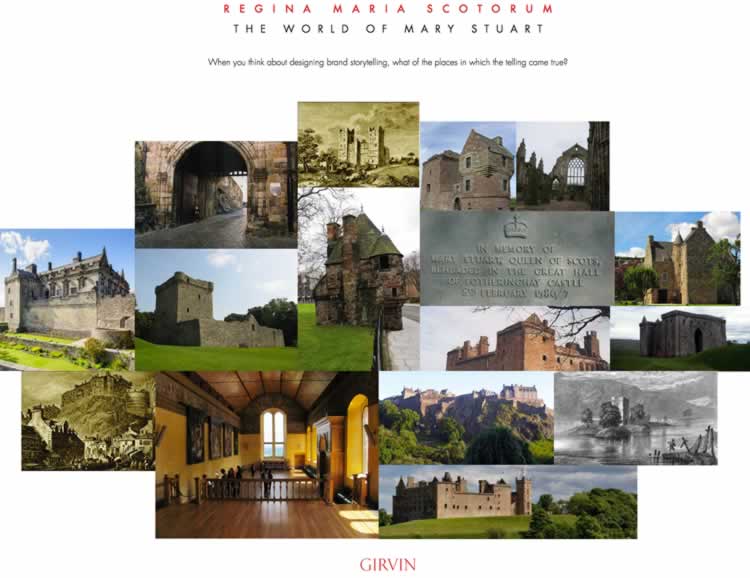 I design the storytelling around films as books — journeys into the mysticism of the storytelling, the labyrinths of layers. Sometimes in English. Sometimes in other languages. I work out the architecture of the book as a building with the way in, and the way out.
small title
I N L I B R O D E R E G I N A M A R I E S C O T T O R U M
main title
T H E B O O K O F M A R Y Q U E E N O F T H E S C O T S

T
H E R E  IS
adventure, wonder and blood in the story of Marie Stuart, a woman born high. She went higher still, lost everything familial in her earlier years, then gained back an army, and a family, a cousin of inestimable power and still there, in the end, lost it all through the passionate blood of that other, so similarly enflamed, that the voice between them was almost as one. There is a grouping of 10 studies of identity renderings for MARY, QUEEN OF SCOTS. 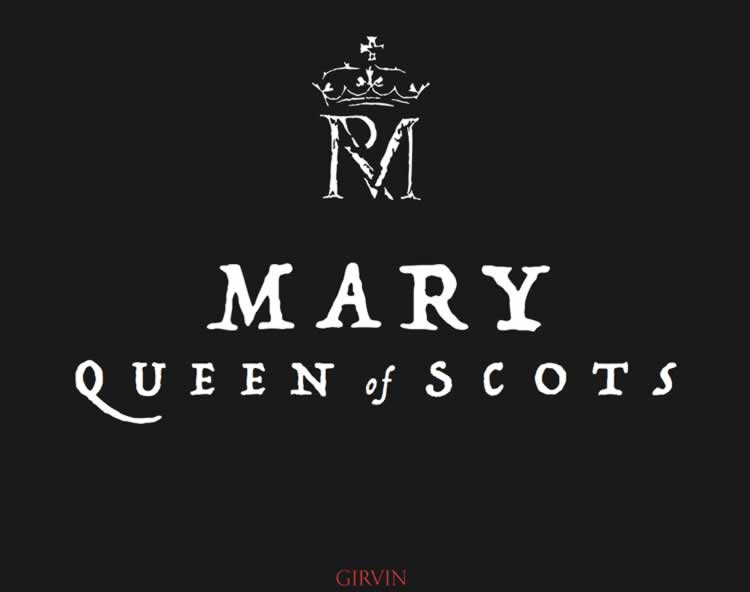 We’ve built them as paleographically accurate to the period, yet relevant as clustered theatrical studies.

To build that, we’ve walked back in time and studied the art, the architecture, the manuscripts of her time — and we’ve studied her, her art, her possessions and built around her — design solutions that are customized and authentic. 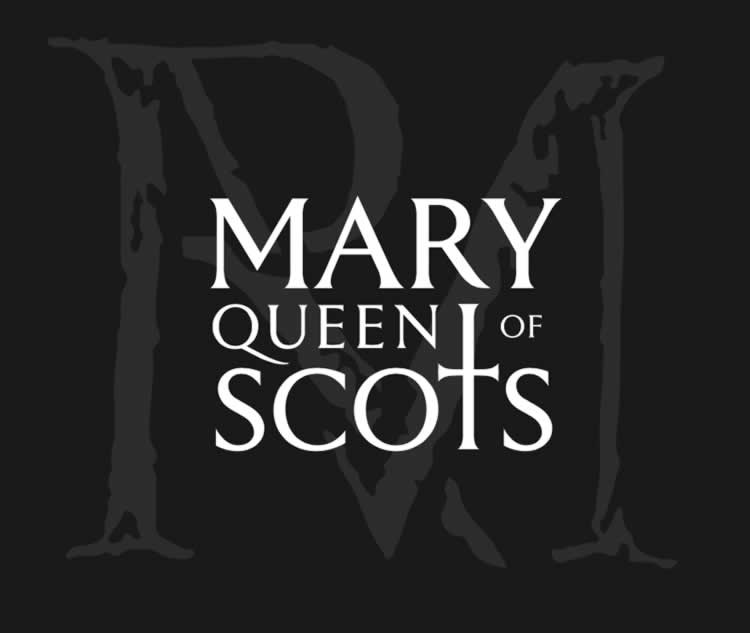 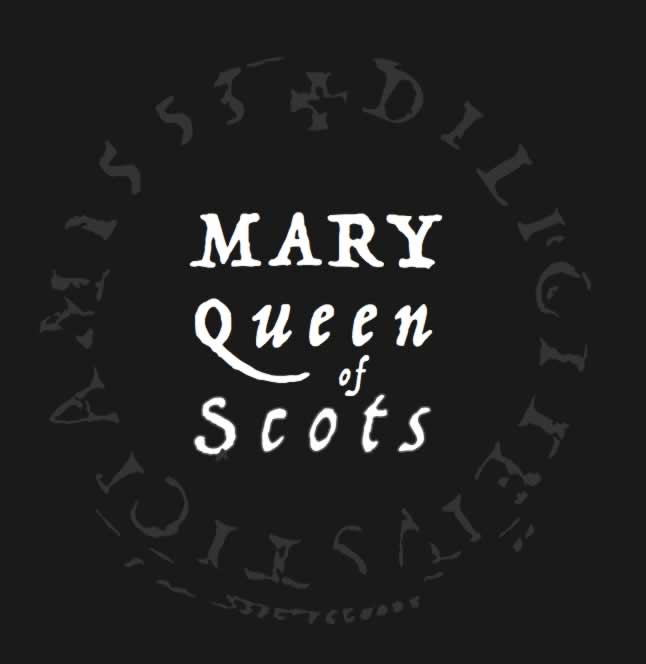 So to that journey, it’s just that — I walk in,

smell the roses and build a
graphical story in a story, 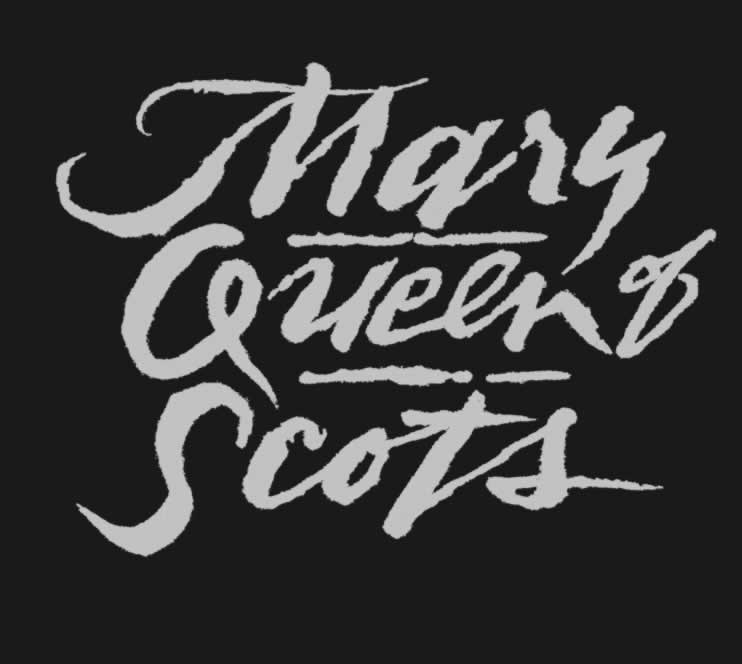 that which breathes the story and perhaps,
breathes it as an inhalation that isn’t from this time,
but the time of making.

So here’s a touch of that walk. 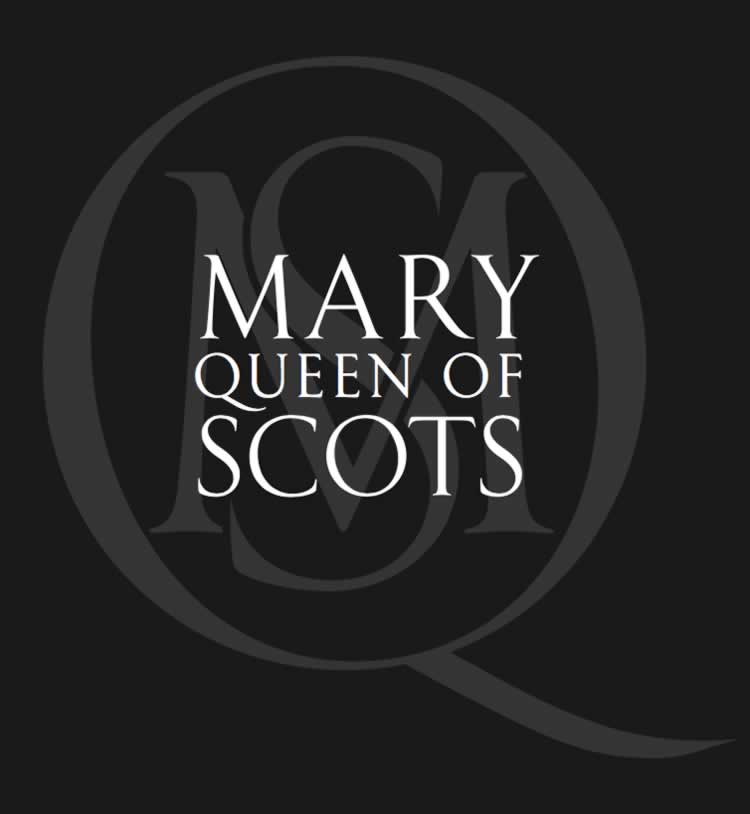 Drawn with steel, with pointed quill and the tiniest brushes. 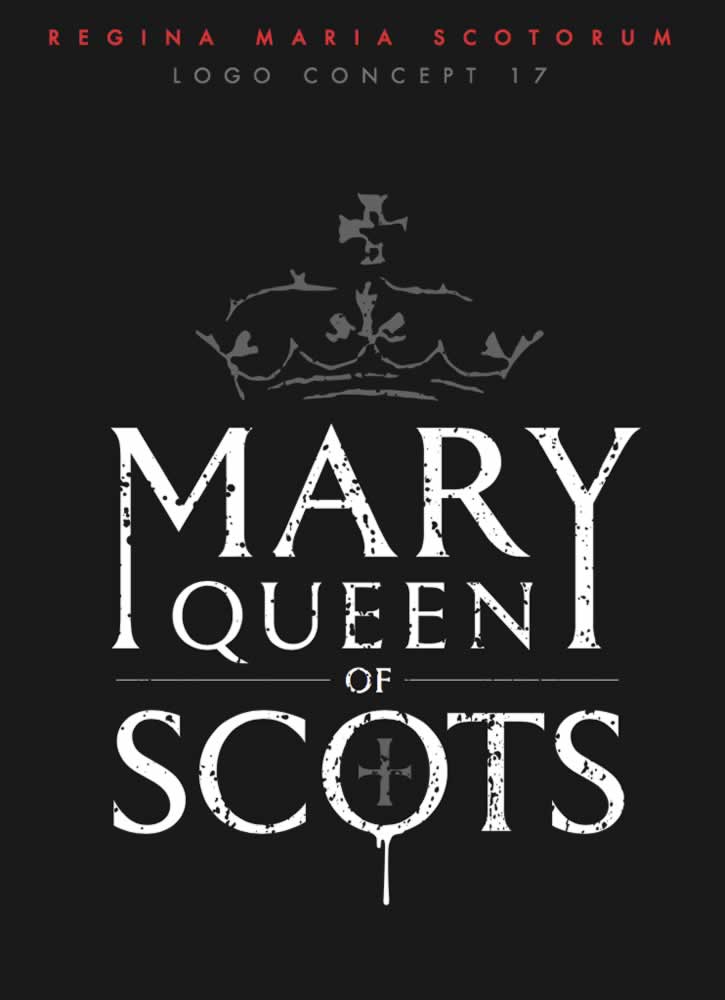 In the beginning and the end, the work is about heart fullness, how the writer feels the story, what emotions are there, and the diversity in which that prismatic interpretation might hold purchase twixt the sharpened steel of an antique pen blade and the roughened hide of a hand-made people.

Then, you go there.

THE FOCUS OF THE STROKE, SYMBOLS AND WORDS WELL DRAWN: MEDITATIONS ON CALLIGRAPHY

THE VERY NATURE OF THE WORD CALLIGRAPHY PRESUMES BEAUTY, THE QUEST FOR A LETTER FOR WELL AND BEAUTIFULLY DRAWN—AND TO SOME, DISTINCT FROM LETTERING, WHICH IS MORE OF A BUILT FORM OF LETTER-MAKING. Make by hand, drawing letterforms is a foundational prelude to type design—learning the rudiments of letterform architecture—the study of the movement of…

THE WORD, THE MARK, THE QUEST FOR MEANING IN BEING

THERE IS A WORD AND A STRING OF LETTERFORMS; AND IN THE CONSTRUCT OF THE TWO, THERE IS MEANING IN THEIR BEING. CONTEXT AND WHAT THAT MEANS FOR A DESIGNER, A BRAND AND AN EXPERIENCER. [Above] Tim Girvin shooting words, textures, materials | photo Dawn A. Clark IN THE QUEST[IONING] OF THE CRAFT, your journey,…
We use cookies on our website to give you the best experience on our website. By clicking “Accept”, you consent to the use of ALL the cookies.
Do not sell my personal information.
Cookie SettingsAccept
Manage consent