Meditations on the history of scent, the smoky bridge to good fortune, and luxury in prosperity in Chinese Culture 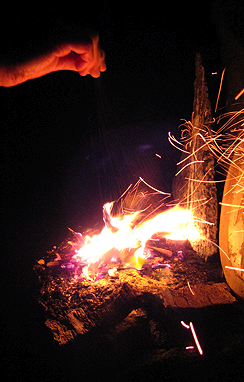 There is a sense of the auspicious that wafts in the long, historied halls of China. That, for centuries, there has been a character of wishful appeasement that relates to the Chinese view of the world. And now, it’s a continuing presence in their evolving manifestations and the renewed growth of their empire — old habits and familiar rituals die hard.

In the heart of the billions that live there, there is a form of balancing spirituality that reaches far back in time, to the mystic and misted past — the divinatory realms — of seeing a way in the world that is derived by the auspices of rightful reading of circumstance. And it’s all carried aloft in scented smoke. 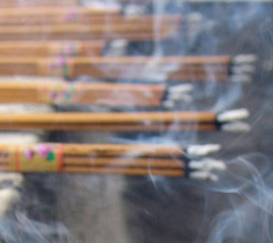 Fortune and prosperity can be found in the rightful aligning. That proto-pantheist, nature worshipping — and later Confucian and Taoist — practice of revering emblems of good luck and studied, calculated alignment. That measured astrological perfection might be noted in the opening date of the Beijing Olympics — bounded by 8s, the time: 8.8.2008.

I would imagine that among the geomancers and astrologers of present day China there is some feng shui accounting for the overwhelmingly spectacular earthquake destruction and loss of life in Southwestern China — what failure was there in the mind of the Chinese and the distant sensibilities of story, the auspices, auguring the mythic gods and appeasement?

For anyone relishing the perfected interior of a Chinese derived space, feng shui is about the management of forces — literally, dragons — that wind and wield their presence in our worlds, creating spaces that are harmonically linear and protected. Demons are blocked, fluency in context is refined — flow happens and good fortune prevails.

I believe that there is a link between the realm of that geomantic tradition and the cartography of good fortune in the realm of scent.

There have been a number of articles over the course of the last several years about the concept of scent and branding in the space of the Chinese marketing mind.
That there have been challenges in the Chinese mind in actually comprehending the idea of scent — perfume, literally — in application to the well being of their style and personal impressions. They are, as Dana Thomas (http://www.nytimes.com/) and Radha Chadha (http://www.chadha-strategy.com/home.htm), both Asian luxury branding specialists, have pointed out, regularly gathering up western traditions of luxurious appointments. And, to their assessment, they are doing this singly for the category and class-leaping capacities of branded treasures.

Owning a signified brand (literally, logoed) is a way of saying something about one’s stature. For the buyer, the mere expense and attributions of the brandmark are significant — they do something for the user beyond the functionality of a object’s utility. They allow the buyer to climb to a new self image and societal presentation. But why, then, is there a challenge in the framing of scent marketing to Chinese psychic transition, enthusiastically adopting yet another westernized branded beauty — and luxury — tradition?

Perfume and the art of scent in China

I met with NYTimes fragrance specialist — and writer — Chandler Burr (www.chandlerburr.com/) in Seattle as well as NYC, and we talked about the concept of scent in adoption — how do people gather up a link to perfuming themselves? What scents resonate, what repulses — and how can that process be certified in a way that people make their own way, happily — choosing what they will — rather than being doused, for example, in a department store runway?

China’s acceptance of perfume is another matter. According to Burr, that he describes perfume as “nonessential Western luxury product that the Chinese have historically never bought and that has virtually no Chinese cultural roots”. Clearly, as he’s noted — perfume, the branded mystery of scented vapor, is declining in global sales. But that losing proportion is rising and growing in China. Patrick de Lambilly, Coty VP, Asia, says, “You can see 20, 30, and 40 percent a year.”

There’s been experimentation in the idea of selling Western brands in China for nearly ten years — and, like any exploration of taste, food, scent or otherwise, there might have to be tuning to comprehend the right relationship. In Girvin’s work with Procter & Gamble, for example — not only are there potentials in shifting scent, but packaging and identity, as well as naming, to accommodate local taste factors. Burr, in another article, references this thinking — that in analyses of fragrance for the Chinese women, the characteristic is more about gathering, appropriately, brand links. Chinese women, of the class-leaping kind, perhaps, savor the fragrances of the well known. The fragrance and flavor group Givaudan | Quest assembled a marketing team to begin a significant focused study of scent and the Chinese consumer. The discoveries? Burr notes:

“Quest found that Chinese women above all want harmonious perfumes — those avoiding a single strong, identifiable raw material but rather using smooth blends of elements. They liked youthful fruit scents and, even more, flower-petal scents. Brand influenced them hugely. Quest marketers concluded they liked Chanel No. 5 and Paris by Yves Saint Laurent less for their smells than for their brands. And the women decisively rejected powerful, strong-signatured perfumes.” Interestingly enough, the Chinese men tested tended to relish more harmoniously combined fragrances — nothing with a cruder, strong scent note.

While the potential growth in the Chinese market is gargantuan, making sales happen is — as has been long evidenced in other areas, hard to do. One, the concept of scent on the body is relatively new — and most consumers there are focusing on what they know. “Brand, brand, brand” — Alexandre de Chaudenay, Asia-Pacific managing director of the perfume licensee Beauté Prestige International. P&G offers more precise numbers, while others seem confused in the mystery of netting out how, literally, they are doing…

Procter & Gamble’s Asian operations for scent, EVP Hans Wohmann, said sales in China for the categories of “prestige fragrances” — designer perfumes and luxury groups like Dior, Chanel, Estée Lauder — were roughly $120 million framed against the $9 billion European market or the $4 billion American market. The largest fragrance market in the Asian world is Japan — and its total was about $525 million in 2007. Even the Japanese market, the largest in Asia, was $500 million in 2006. Chandler notes, in conclusion: “As Mr. Wohmann put it, “20 percent of the world’s population has only 1 percent of the global fine fragrance market.”

While the Chinese fragrance market is still growing, there are difficulties in the market that are emblematic of the Chinese mindset — cultural expectations of pay out and gifting; bureaucratic approvals in licensing, product warranting and certifications; required alliances and distribution partners, piracy, rapidly shifting financial instruments, markets that are moving so fast and gravitating so quickly that one day something’s in, the next moment, it’s been replaced. 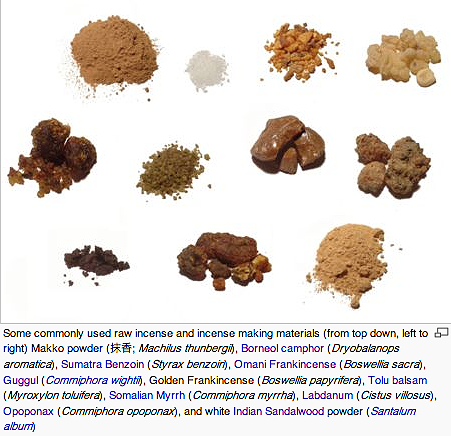 A gesture to the history of manufactured fragrances in Asia

What is the legacy to scent, in Asia? I believe that, in keeping with the opening of this blog note, it’s actually far more long running than has been implied. 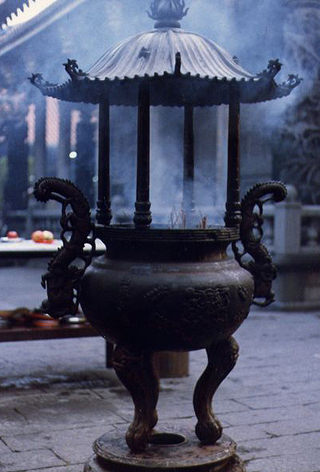 Western observers put the use of fragrance among the Chinese as early 20th century; lightly-fragranced, mosquito repellent, scented shower products. It’s my experience, I suppose, that there’s a strong link between the concept of the spirit world and scent — and while some might counter that incense practice is wholly different from perfume, I believe that genetically they are the same. 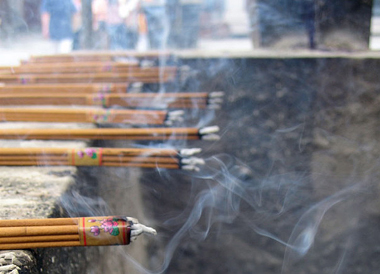 Anthropologists say that the origination of the concept of perfume was used by primitive man through the burning of gums and resins for incense.
It is projected that from 7000 to 4000 BC, richly scented plants, animal and fatty oils of olive and sesame, are thought to have been combined with fragrant plants to create original ointments. Literally burning these natural amalgams created the smoke of scent. The excrescence of this burning soot provided another layering of scented paste. 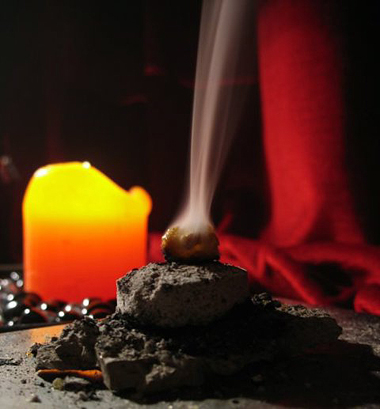 Three thousand years ago, in China, aromatic herbs were used for medicinal purposes — in unguent or paste applications to the body, admixtures for drinking, tea infusions and in scented burnings for ritualized offerings. There is archaeological evidence, as well, that scented oils, essentials and creams were used in Mesopotamia for ritual ceremonies, decoration or eye protection in rimmed mascara, during the same time period. In ancient Egypt, historians believe that perfume was first used in rituals, as part of their religious ceremonies, creating a sacredly cleansed environment. These sacramental scents came from gums, resin trees, oil and from a variety of plants resulting in a perfume unguent that was rubbed into the skin. Hundreds of years later, the women of Egypt used perfume for their therapeutic and cosmetic qualities. Egyptian queen Cleopatra had her own exclusive balms and scents, which — according to legendary telling, helped her to conquer Julius Caesar and later Mark Anthony. The link between natural essences, oils and crushed materials, to burning offerings and scent diffusion, to perfumed quintessence isn’t a long bridge of connections. And, as well — the Far East is the very heart of the spice trading routes that crossed, western bound, to the scent merchants of the Middle East, the Mediterranean, Southern and Western Europe. 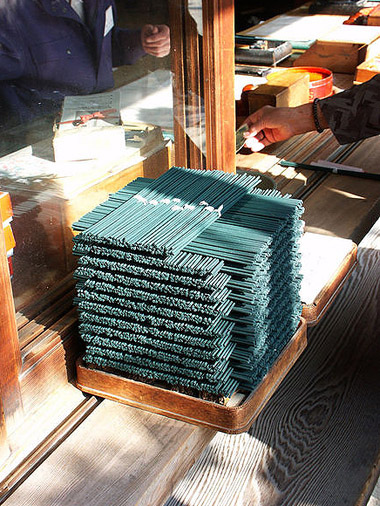 Incense was first brought to China by a monk around 200 CE and that by the Tang dynasty (618 – 607), incense was in common use and no longer restricted only to religious or medical practice. It was during this time of extensive trade that compressed scent was evolved — stick incense was developed in China during the Ming dynasty (1368-1644). 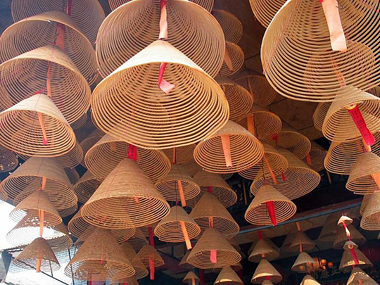 This spread, as well, to Japan — during that time period, the art of making incense was a highly developed, even ritualistic form of contemplation in Japan; entire schools were devoted to the art, or Koh-Do, ‘the way of incense”. And even today, in temple compounds throughout China, Hong Kong, Taipei — and multitudes of other sacred or ritual compounds — the smoke of scent, a fiery perfume, links the earth to the heavens — and bridges beneficence in life.

Why the link between good fortune and scent? Because reaching to the past, the ancient and distant history of fragrance, incense was the bridge to transforming space and sentience. It is an appeasement. The burning of offerings, the ritual scent of the heaven bound, is a link between the earthly and the ethereal.

Smoke that burns from heated plant materials — or scent that is applied in essential oil or infused spirits – are still speaking the same language. They cross over — they transport; they take the experiencer from one place to another. What’s intriguing about the nature of the selling of bottled perfumes in China is that the concept of burning scent would seem to lay the ground work for it to be much more readily comprehended. There are thousands of years of history in scent in creating a heavenly bridge. What difficulty in learning more about how to reach that story, to appease the spirits? Of man? Of god? Of nature? 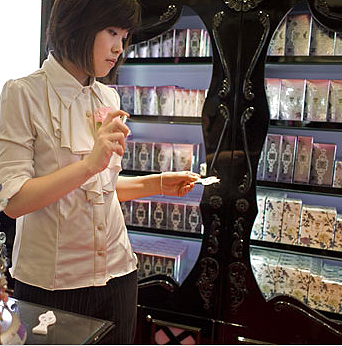 And, finally, in the tentative explorations of the last decade, the Chinese try to do better about merging this other, supposedly Western, luxuriation into their lives. Or into the Olympics.

Benetton‘s fragrance trial for the launch in Beijing: 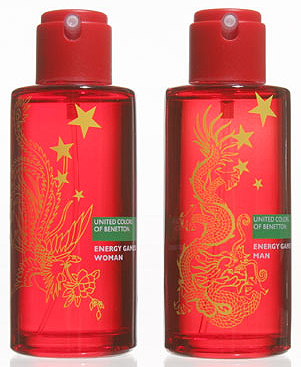 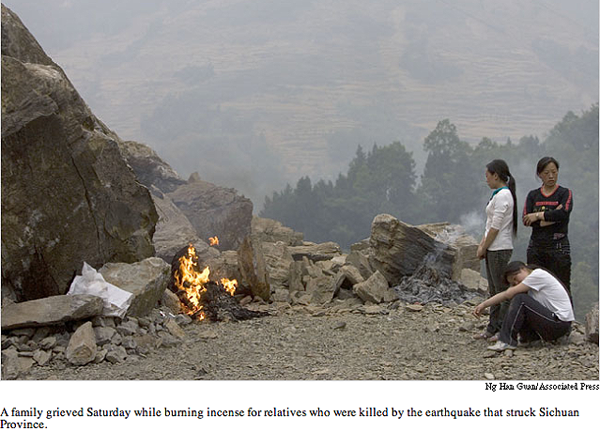 Brand experience is always about gathering content and pointing -- even in synaesthetic context -- to all of them. The notion of synaesthesia is about sensations crossing modality, from one sense to another. This concept of merging sentience speaks to mixtures between levels of experience: hearing taste, for example, seeing music. And in some instances…

The design heritage of the Indiana Jones franchise. Reaching back into the deep territory of my imagination -- and my history as a long-running movie goer, I stride the aisles of Fox Theater, downtown Spokane, the 60s -- and riding the buses alone, seeking the filmic, forbidden adventures of my childhood. Going downtown by myself…