10 Billion Apps and the first stroke of inspiration.

“Making a dent in the universe” — the drawn gestures of innovation and design strategy. 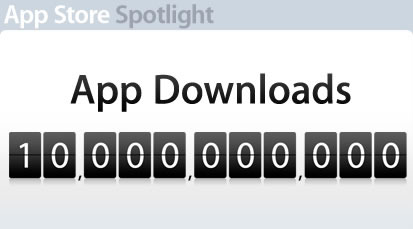 We have a winner! The 10 billionth app, Paper Glider, was downloaded by Gail Davis of Orpington, Kent, in the UK. As the grand prize winner of Apple’s 10 Billion Apps Countdown promotion, Gail will receive an iTunes Gift Card worth US $10,000.*

Working in Seoul, and finding soul in the stroke of an idea.

I was contemplating a story from a friend of mine about Steve Jobs. But the story actually runs deeper into the heart beat of my own experience with him, in my earlier experiences of grace in the Apple Empire, down Infinity Loop way. The story of the beginning — working with Steve, rings to the idea of typography, beautiful design — making these ideas, objects, interfaces and links to people: really “cool” — but really beautiful.

“is that cool enough?” — a phrasing from Steve about a string of scripts I’d drawn for Macintosh packaging.

I’ve told that story, many times — but it’s a long thread for me, stretching forward, stretching backward, that starts with Lloyd Reynolds, being at Reed, connecting with Steve Jobs at Stanford, then working with varying teams over many years. But it’s the heart of the message, what we might call the first stroke that is the most interesting.

I was working in Korea, the capital, exploring the idea of a soul-full persona for a giant retailing enterprise. That story, finding the heart of the family vision that could empower the brilliance of a new idea in sharing the commerce of micro stores, department stores, mega stores — all synced to the beat of a single heart. In any city, there is a wandering — being out, exploring and studying. 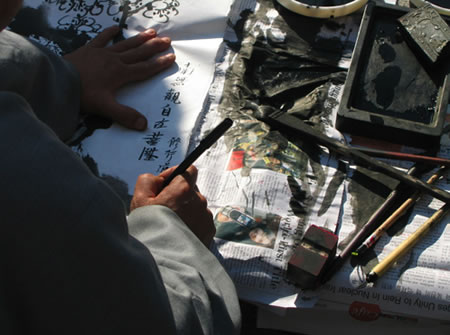 Up one old alley, I found a calligrapher, writing. His inks, stones, all lying there — amidst brushes and old newspapers — from the east, the west. And speaking with him — he was almost garbed as a kind of hermit, or tramping Zen master — I asked him about the first stroke. “What about the first stroke?”

With the woman that I was with, the brand manager from the Korean client, she translated — “the first stroke is the whole thing.” In the first stroke, everything in the story begins. The touch of the first stroke suggests the character of the entire composition – that touch, the texture of the movement, the thinking: it’s the beginning of everything. And to the mythic realm, from ancient asian principles of the founding of the world, to the north african and semitic legends — God began things with the one stroke of being.

I was thinking about that, the idea of the beginnings — the first stroke of the idea. Make your mark. Talking with Steve Jobs about his background, when we began to work together — he’d mentioned that it was the calligraphy class that was the most unsettling, the earth shaker — the beginning of the designed idea…

All of us have experiences where what we learn is the most amazing, the most life-changing. A friend suggests another layer to the notion of the first “stroke.”

According to Robert Lane Greene, that beginning stroke, in a manner of allegory, suggests the cartography of a corporate life, “Jobs says that the most important class he took in college (before dropping out) was calligraphy. A designer at heart, he headed the team that launched the first Macintosh computer. As other members of the team worked nights and weekends to make the thing perform better, Jobs demanded tiny changes to the shell, tweaks to bits and bezels that the others could barely see. Beige and boxy as it may seem today, the Mac was a design revelation in 1984. It was the world’s first commercial computer with a screen that looked anything like the way yours does now.”

What I think, in the multiple billion strokes of the relationships to the iApp community — and from there, the beginning — the curious explorations and detailing of the mind of Steve Jobs, his “first strokes,” the dented universe of creative design strategy, Apple brand thinking — and the long trail that has been laid in the momentum since that time.

Tim | Vancouver, BC
–––
THE DESIGN STRATEGIES OF BRAND + ENTERTAINMENT

Why work? The fight club model of performance living

1.27.2011 Men Are Drawn to Competition-Based Pay Men were 94% more likely than women to apply for a job if its salary potential was described as being highly dependent on competition with other employees, according to John List of the University of Chicago. The online job ads that attracted the largest proportion of men offered…

The Architecture, the Mind and the Memory: Notes on the Production and Place Design of "Inception."

Smashingshare.com The metaphor of the mind, architectural design and the secret of dreams The Architect from the film Inception (Warner Brothers) From the film: Inception A conversation with the inceptor and the architect Cobb: You create the world of the dream. We bring the subject into that dream and fill it with their subconscious. Ariadne:…
We use cookies on our website to give you the best experience on our website. By clicking “Accept”, you consent to the use of ALL the cookies.
Do not sell my personal information.
Cookie SettingsAccept
Manage consent