A love of the Skull | Alexander McQueen

The End that is the Beginning | Brands & Death

It might be said that the idea of associating the creative essence of the late Alexander McQueen with a skull is a mistake — a slide off the backside of a brilliant man, who passed in the swirl of an astonishingly feverish, fantastical creativity — a sheer volume of work that could’ve been produced in a multiplicity of lifetimes, he did, in one. 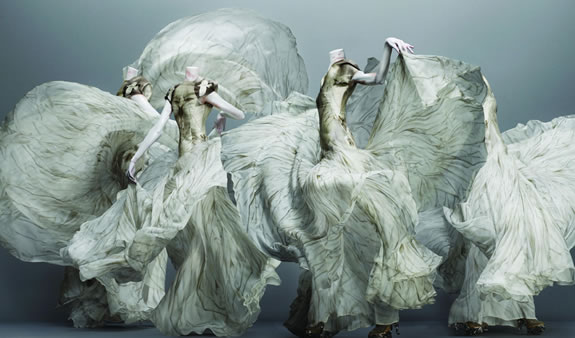 I saw his show at the Metropolitan Museum of Art [I bypassed the hours of lines by standing in a student line, since, to my take, I was a student.] The show, as widely proclaimed, was a miracle of imagination, craft and narrative explorations of archetypal manifestations. 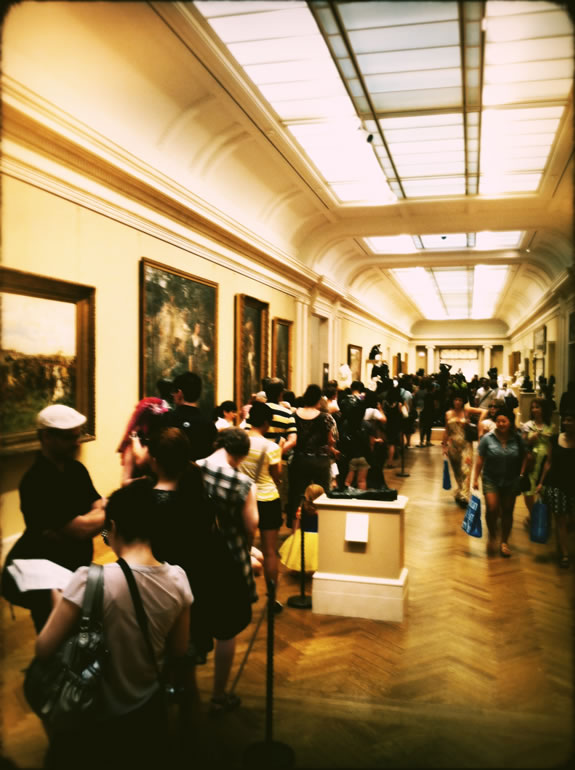 I’ve written a string of notes on his work. As a designer, to designer, the idea of a deeply psychic storytelling of a brand embracement in the depth of McQueen’s work is a bridge from myth to storytelling — deep legend, to depth of archetype. Like many in the brand and design arena, the idea of a deeper space & place for psychic experiences in the heart rhythm of the human condition — it does come down to the meditation on the meaning of the work. If there’s a story on the meaning of design — and the inner exploration of what that might mean, to personal examinations, journey, path and the mystery of the creative place — what is design for, but a way to find a place to be?

Studying McQueen, I realized that there was a journey in his path to the end, that aligned, in a manner, to my own. In the passage of my youngest brother, more than 10 years back, it was my thinking to get closer to, and to embrace all things mysterious and deathly. The other side, of everything. Not in the context of a embrace of the black arts, or a gothic fascination with death, but a bigger picture awareness of the other side — as just that, the other side. And, to that end, the meaning of the life, the work and the craft of being in the world of designed magic, a meditation on depth, the veils and tiers within. To that, I began collecting skulls, in the very year of Matthew Girvin’s death. I still have all of them, all over. It was only a half decade back that I learned of McQueen’s interest in the iconology of skulls. I was wearing a skull festooned scarf — two of them, intertwined — and a woman called out, “is that an Alexander McQueen?” Skulls, that brand-linked, to McQueen? Perhaps so.

We are here, this side; then we are not — we’re somewhere else, the other side. Did McQueen contemplate that crossing?

In my travels in Tibet, I was studying the iconographic representation of skulls and skeletal dancers, and — to one take — it’s that journey to the truth, the skinned and cleaned, polished-out presence; there are no visages of the artifice of skin, facade, the mask.
The skull is the truth. 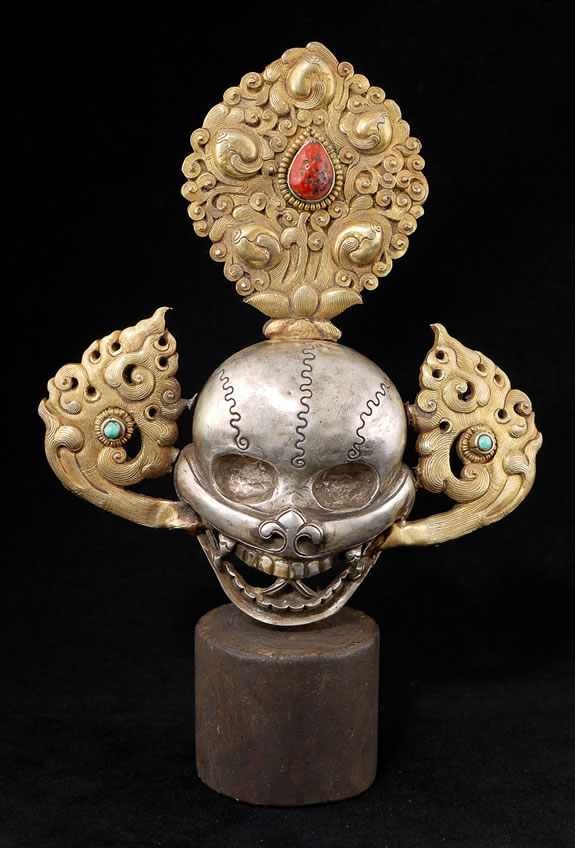 The point in McQueen’s work is that the idea of the skull as being emblematic is a statement of merchandising and variation. Skulls have been cool for decades, we noted even Von Dutch and Don Ed Hardy‘s examination of the skull. We theorized that Tibetan flaming skulls and hot-rodding skulls might have been provenance intermixed, to the two. 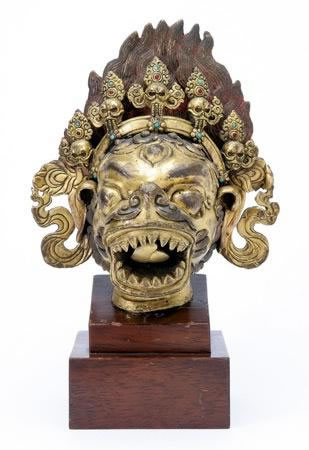 When I think of the skulls, the scarves, the rings, skull-marked devices and jewelry — I think about a designer exploring passage — the proximity of relationships, perhaps most potently that of his connection with his Mother, who died shortly before he took his life. 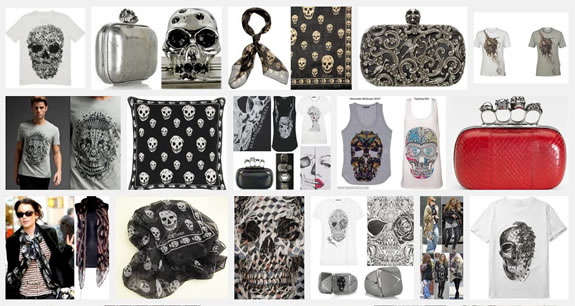 But more so, in the years since Matt’s passage, of collecting skulls,
from Tibet, Mexico, 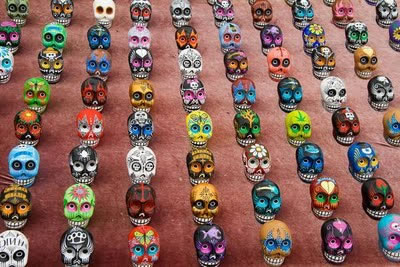 Imagery from Skulls n’ Roses, Day of the Living

Indonesia and India, spreading them like sentinels, everywhere in my living spaces, I find myself [literally] in the whirring, and whirling spindle of the threading of life — those, round me, that live on, and those that have gone to another place, the other side. Skulls point to the memorial, the remembering, the re-collection. What’s on this side — the now, the yesterday; and what’s on the other side — the next, the tomorrow. This side, that side. Which scene, is seen? Light, dark, here, there, gone? Which — the other side, these days, is seemingly just as lucid as “this” side.

There’s always that, to the nature of design — where do you look for inspiration? The beginning, the middle, the end? To an alcoholic friend that I’d met in an AA meeting, “Tim, you can look back, but don’t stare.” To the nature of contemplation, a dreamy and focused surveillance on what’s been done, where you have been, and where are you going in the work that you do, what is the place of death and dissolution?

The point, in my life, is holding death close
makes everything all the more valuable,
but too — it’s all the more easy to
realize that it’s not yours — anything — forever.

Like Basho‘s
variously interpreted haiku
“Crickets,
why cry?
We all
go
that
way.”

In any case, to the spectacular commitment of McQueen’s risk,
courage and leaping into the wisdom of wholly engaged creativity —
skulls aren’t everything, there is
far more to explore, see here, for a reference of expressions.

RISK,
COURAGE,
THE WILD LEAP
OF CREATIVITY.
WHO JUMPS THE FARTHEST, TO
YOUR TAKE?

Building brand identity around story, environment and experience The design of a gaming world is a multiple year commitment, and a spectacular investment -- especially when the notion of a gaming world coincides with the conception. Some never make it, fueling out funds with massive teams committed to building those worlds. We've been caught up…

The Wisdom of The Ancients

While I was walking in the woods, the ancient layers told me their stories. [Image above by Justin Kern, altered by Dawn Clark, AIA, LEED AP] When I was young, in NY, my parents took me to the New York City Museum of Natural History [AMNS.] This was a whim reaching to a noticeable interest,…
We use cookies on our website to give you the best experience on our website. By clicking “Accept”, you consent to the use of ALL the cookies.
Do not sell my personal information.
Cookie SettingsAccept
Manage consent