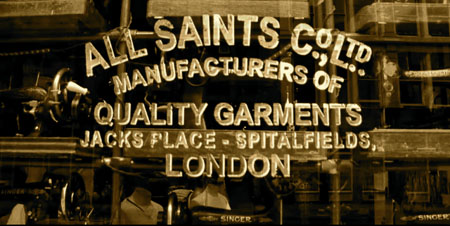 Ever since All Saints Spitalfields launched in New York City, I was curious about the strategy of design. What’s the story?

There is one, a part, here: 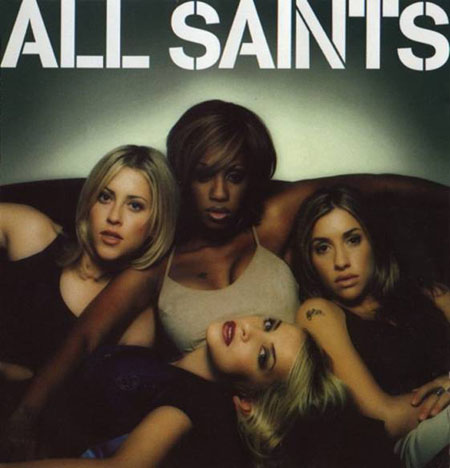 According to Anne Ashworth, in a note from 12.28.2005, The Times, UK, “All Saints, Karen Millen and Marks & Spencer? The answers are: All Saints is named after the hip and happening All Saints Road in Notting Hill, the street that also inspired All Saints, the 1990s girl band. Kevin Stanford, a retail dealmaker, connects these disparate shops: he founded Karen Millen and still has a stake in its parent company; he recently turned an £11 million profit on his M&S shares and is now bringing his high-street smarts to bear on fast-growing All Saints, his latest purchase.”

She continues on the theme of emergence — a strangely unfamiliar brand — know it? Or is it a mystery — for many, it’s a surprise, yet the brand originated in the late 90s. 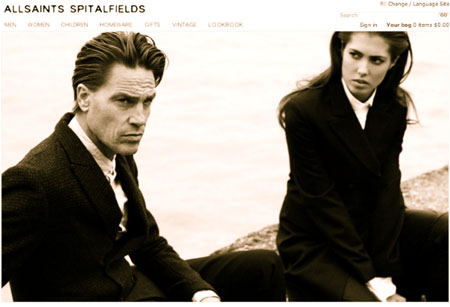 Ashworth notes, “My attention was drawn to the chain by Stanford’s intervention and the enthusiasm expressed by All Saints believers. These fans are not all in the 18-35 target demographic. One fortysomething devotee of the cult told me: “I never feel sexier than when I’m wearing All Saints — I’m Gwen Stefani or Nico from Velvet Underground.” The reference to these two singers provides a clue to the jumble of trends that form the All Saints’ glamour-meets-grunge ethic: Stefani, a platinum blonde, favours get-ups that are Jean Harlow crossed with a principal boy; Nico, a sultry blonde, was an Andy Warhol muse and early Goth. 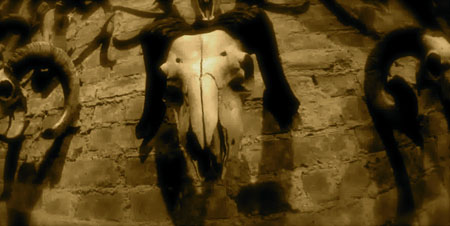 Geographically, the opening store conception, Spitalfields and neigbouring Hoxton, the character of the conception of “distressed” is never anything but positive. “The All Saints store is an expensive monument to the distressed style of decoration: the brickwork is exposed, the wood flooring carefully aged.” According to friends working as the architects of record for the Seattle location, the concept of detailing that degradation is one of careful staging — teams working for weeks on the blasting and chiseling of every single brick. All Saints Spitalfields becomes in this light, a kind of set design, a cinematic production. And indeed, the idea of story and the context of brand narrative is a tactical character that is infused in every detail.” Still, getting more information is hard to come by — staffers are not allowed to talk about the brand or comment on the concept. Querying one manager, I was referred to another, and another — and finally All Saints PR, who never responded. That, of course, leaves me to my own devices. 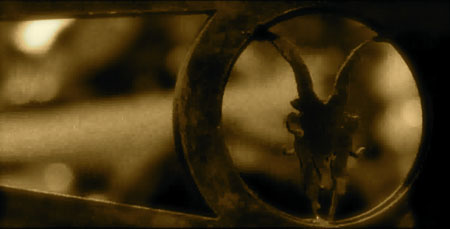 There’s another intriguing twist — the financial background, leading all the way to Iceland. Julia Finch, the Guardian, notes “last year AllSaints was almost wiped out in the Icelandic banking collapse. AllSaints’ chairman, Kevin Stanford, the fashion entrepreneur who also co-founded Karen Millen, faced a battle with the administrators of the collapsed Kaupthing Bank to retain control of AllSaints. The high court had to intervene, but the argument was eventually settled. Both sides now own the business and fresh finance has been provided by Lloyds Banking Group.”
The spirit of the brand speaks to a strange amalgam — antique sewing machines frame the opening, newly configured industrial hardware supports the clothes rigging, staging lighting punctuates the store interiors, all oiled in the grease of hard-working display. There’s a steam-punk attitude — old equipment being refurbished to a renewed utility. But the idea of this victorian retro, fitted with ram’s skulls is a curious mix, conceptually a kind of Dickensian factory space with the ragged, distressed character of gothic punk equipage. The design is ascribed to Brinkworth a UK firm, that built other brands in the Stanford retail mix.
Some imagery from the Seattle store (below) — what’s the story, the evolution of the telling and the character and the legacy? 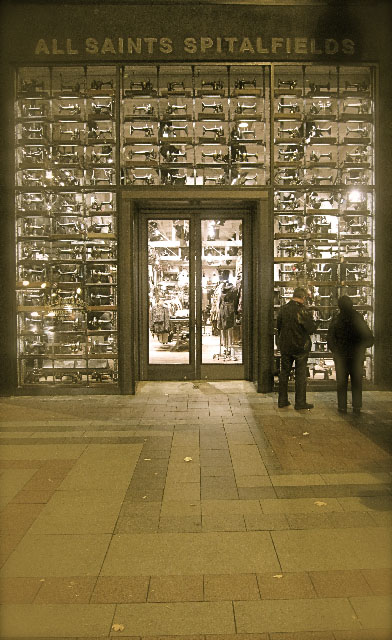 Growth, there are big plans: the opening New York store is the fourth to open in the US, after Los Angeles, Miami and Boston, and new outlets will open in the coming months in Santa Monica, Las Vegas, San Francisco and inside the Bloomingdales. The goal is to offer 30 stores in the US in the next three years. Next year, Craig plans to take the brand to Asia, with the first store planned in Hong Kong. 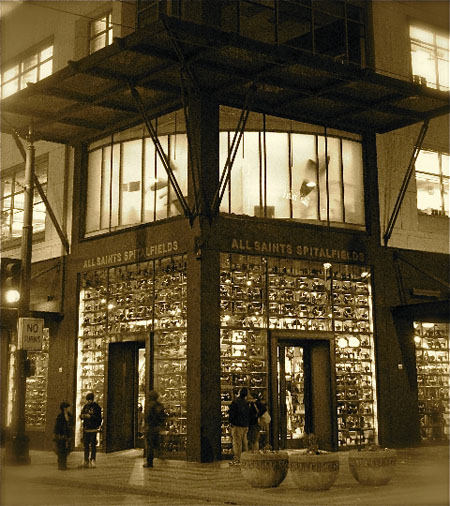 The proposition is winning: sales rose nearly 50% to £133m despite the high prices and the recession, while profits doubled to £24m, according to Simon Chilvers. 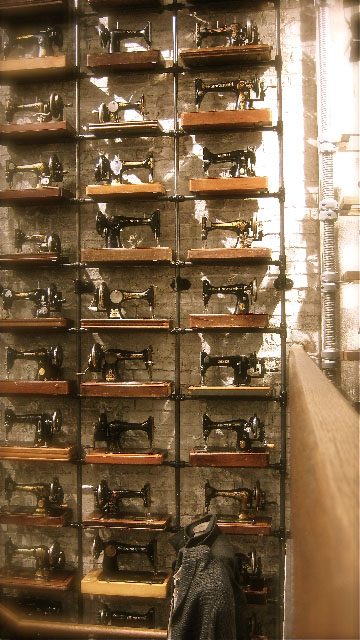 Allsaints established in 1994 as a menswear brand
wholesaling to the likes of Harvey Nichols, Harrods and
Barneys New York and Japan, solidifying a name for itself
amongst style conscious shoppers as the first stop for
design led fashion that never follows trends. 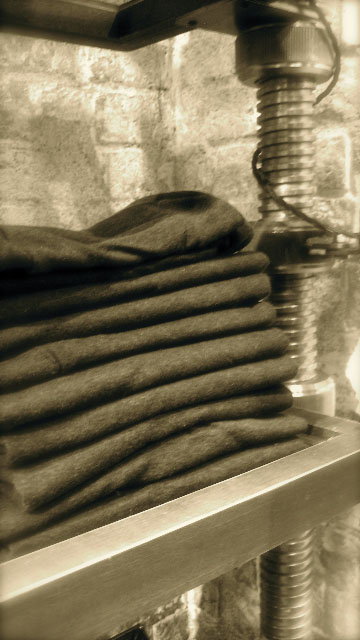 In 1998 Womenswear was born directly out of the expanding
menswear collection of sharp tailoring, fine knits and the
signature washed leathers; injecting sexiness into the
“boyfriend” wardrobe. 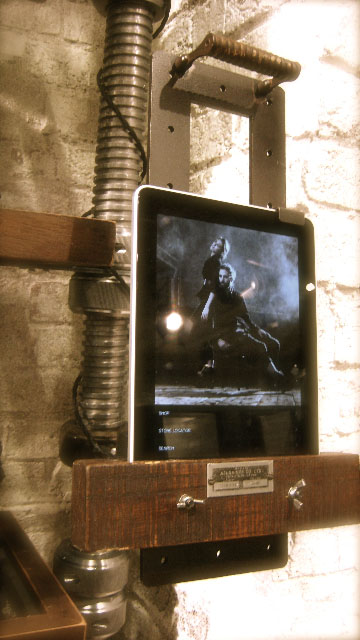 On Allsaints day, November 1st 1997, Allsaints opened their
first standalone store in Fouberts Place, off Carnaby Street,
presenting the complete menswear collection for the first
time. The store has now been expanded and completely
renovated to reflect the original character of the building
and its location. This style now features across all stores,
the intention being to create totally different looks for each
location, so that Allsaints retains an independent, noncorporate
image. 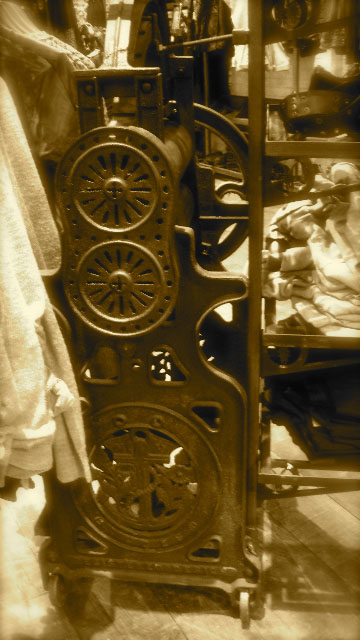 From the outset Allsaints has had a long standing history
of collaborating with and supporting the cream of the music
industry; U2, Stereophonics, Kelis, Robbie Williams, and
Kings of Leon were amongst the first artists to work with
the brand. As a testament to our dedication to music the
brand hosts its own underground AllMusic parties throughout
the year as a showcase for the ever emerging stock of
British talent. 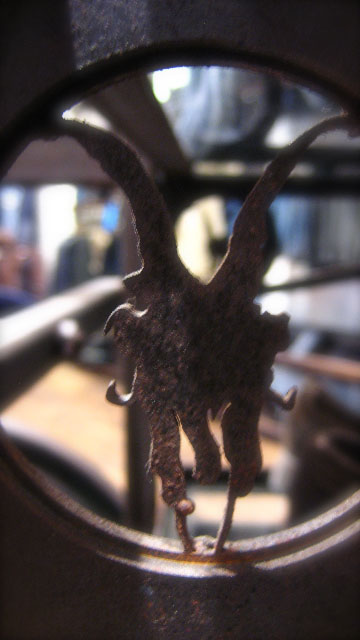 The brand has now built a portfolio of 25 standalone stores
and 34 concessions in key cities nationwide with three
international stores amongst them. 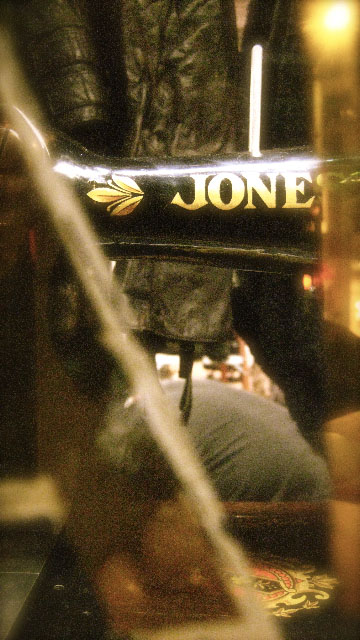 Allsaints stands for being a brand leader; our mission is to
create a brand that blends culturel, fashion and music into
a potent formula of desirable clothing that expresses
individuality and attitude. 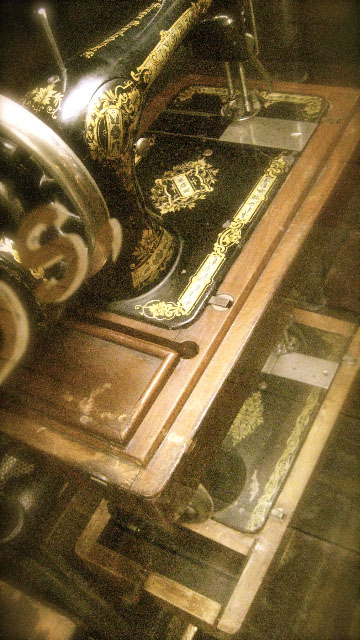 The key to this exploration is the story — but where is the story? I’m wondering — searching — where that legacy might be found. 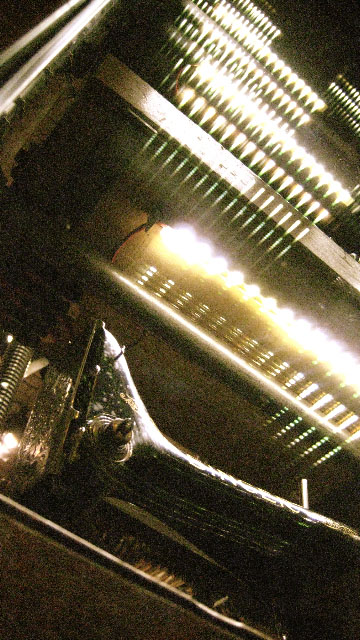 According to their promotional strategy, advertising isn’t part of the mix — nor is there a parlay of strategy, details on the tactics of design, likely because it’s not something that is spread, as a word. 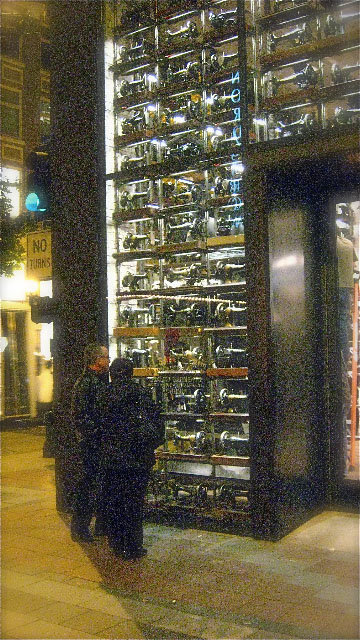 Interestingly, even Brinkworth, the design firm, shows only a clipping (and not even a whole one) — a mystery, then. That might be very well, the nature — who knows why the assemblage of sewing machines. But even those that don’t fall into the demography, stop to study. Sewing machines, there’s something symbolic there — and surely these antiquated emblems represent the heart of the brand.

The rhythm of the machine finds its legacy spread, throughout: 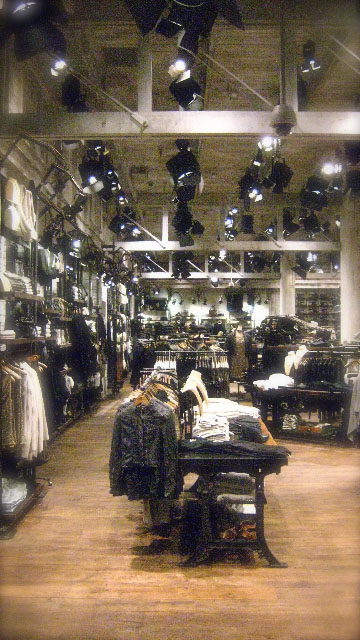 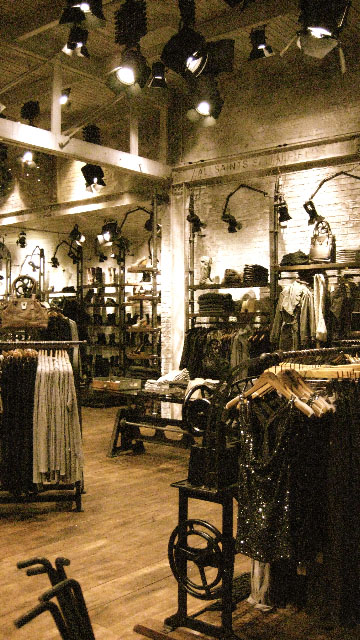 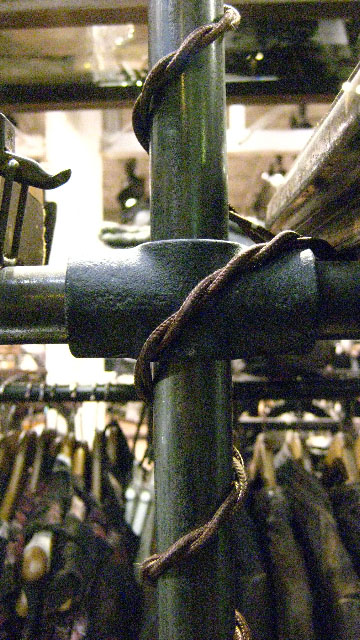 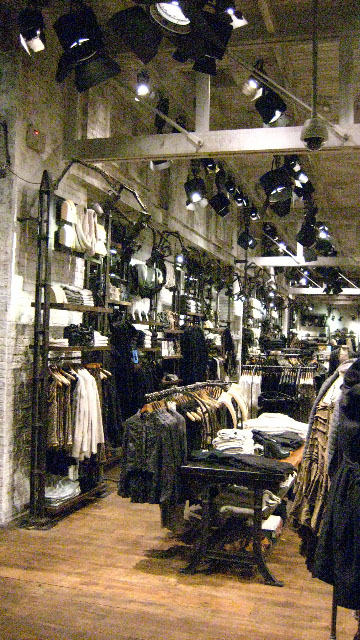 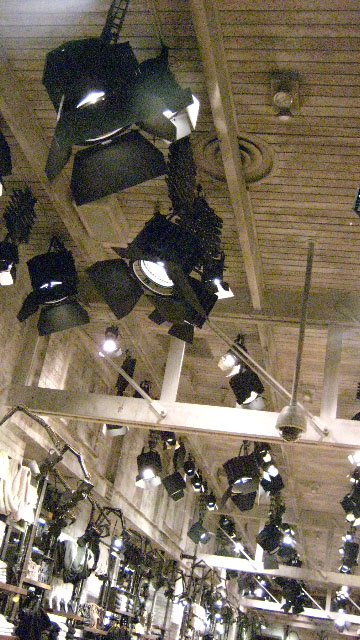 Harry Potter 7 (Warner Brothers) Round glasses, hipness and the legacy of a design theory from the Middle Ages. Image from New York Carver Today's the day that the ending begins for Harry Potter. And if you're one that's studied this phenomenon from the beginning -- even merely from the stance of literary and theatrical…

THE MIX OF SCENT IN PLACEMAKING AND HOSPITALITY DESIGN

Aman | Bali, Indonesia (Girvin) THE HEART OF FRAGRANCE IN HOTELS AND RESORTS Is it a designed scent, the perfume that is gathered into a perfume fusion that signals the messaging of the opening experience in entering a space? Or is it more holistic, the bigger picture? The place -- as a whole, that could…
We use cookies on our website to give you the best experience on our website. By clicking “Accept”, you consent to the use of ALL the cookies.
Do not sell my personal information.
Cookie SettingsAccept
Manage consent