The Exploration of Personal Journey and Ritualizing Experience 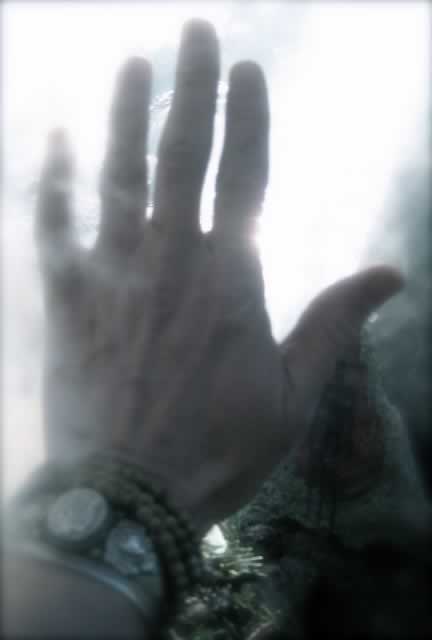 Getting to the soul of things.

I’ve wondered about that. A thing.

What I ponder is the concept of the thing as a notion of time, a construct of place, as alluded to above. And, as we consider it, the thing is a point of contemplation, it’s a meeting place, of mind and people — that stretch, that moment, when reflection takes place. Sentiments gathered. And, it’s about the object — the thing that is held. And the meaning, in memory.

1398, “tangible thing, something perceived or presented to the senses,” from M.L. objectum “thing put before” (the mind or sight), neut. of L. objectus, pp. of obicere “to present, oppose, cast in the way of,” from ob “against” + jacere “to throw”

It is infused, in

the conception of ritual.

Which, in turn, is

And this is about meaning. And the newly finding of it. The meaning in the thing, the rite of the object.

Being with my girlfriend, we explored [and continue to examine] the idea of ritual, in lamenting, in memory, the decade old passing of her sister. And my brother.

We keep at these investigations — committing to the journey of remembrance. And meaning and rite. And it was her idea to create a place in which this passing could be memorialized — or newly observed, in formality. Finding, then, the form of content. And we keep coming

back to that meditation.

We build our own altar, altaring time, remembering at the altar that is made, over and over — one place, another, at the instance of choosing.
Make your own sacred place.
Anywhere you choose to remember. 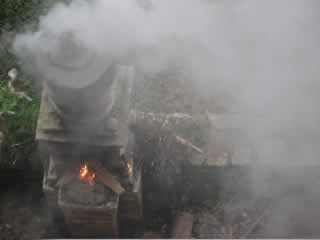 Her idea was to acknowledge, in a manner of her own devising, but something that gestured to our experience together in Bhutan, exploring the monasterial spaces of that extraordinary kingdom, we witnessed the rituals of smoke and oblation. 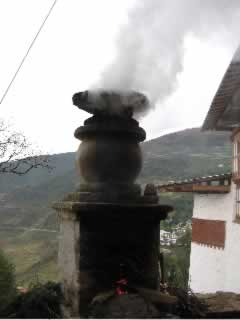 c.1303, “immediate influence of God or a god,” especially that under which the holy books were written, from O.Fr. inspiration, from L.L. inspirationem (nom. inspiratio), from L. inspiratus, pp. of inspirare “inspire, inflame, blow into,” from in-“in” + spirare “to breathe” (see spirit).

c.1250, “animating or vital principle in man and animals,” from O.Fr. espirit, from L. spiritus “soul, courage, vigor, breath,” related to spirare “to breathe,” from PIE *(s)peis– “to blow” (cf. O.C.S. pisto “to play on the flute”). Original usage in Eng. mainly from passages in Vulgate, where the L. word translates Gk. pneuma and Heb. ruah. Distinction between “soul” and “spirit” (as “seat of emotions”) became current in Christian terminology (e.g. Gk. psykhe vs. pneuma, L. anima vs. spiritus) but “is without significance for earlier periods” [Buck]. L. spiritus, usually in classical L. “breath,” replaces animus in the sense “spirit” in the imperial period and appears in Christian writings as the usual equivalent of Gk. pneuma. Meaning “supernatural being” is attested from c.1300 (see ghost); that of “essential principle of something” (in a non-theological sense, e.g. Spirit of St. Louis) is attested from 1690, common after 1800. Plural form spirits “volatile substance” is an alchemical idea, first attested 1610; sense narrowed to “strong alcoholic liquor” by 1678. This also is the sense in spirit level (1768). 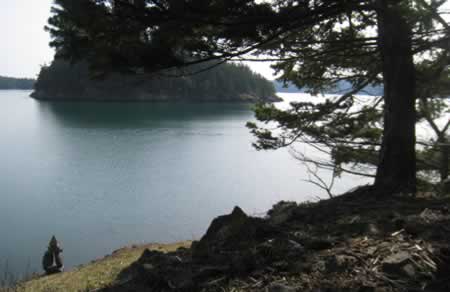 And this modeling, in balance. 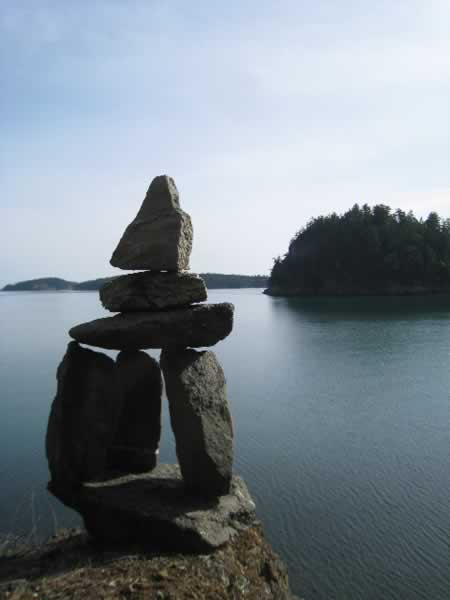 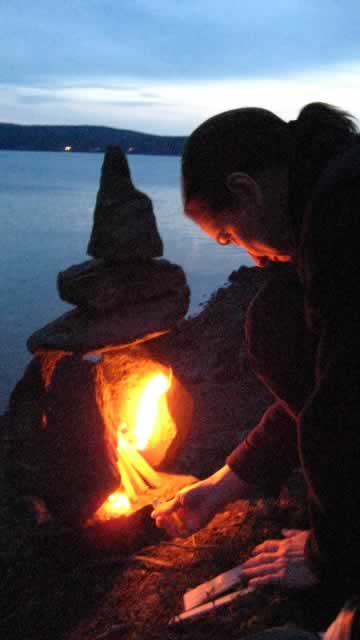 Fire is the translation, it’s the alchemy of transformation — and, in my thinking, fire is about the beauty of the story, the hearth, the spirit in translation — meanwhile, the moon wheels in the heart of the very opening of this notation — movement, in time, passage, in contemplation. 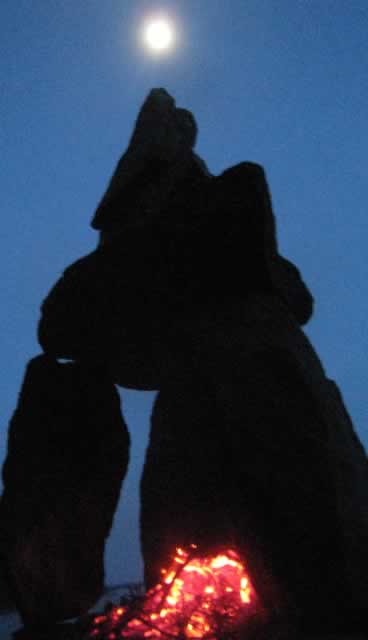 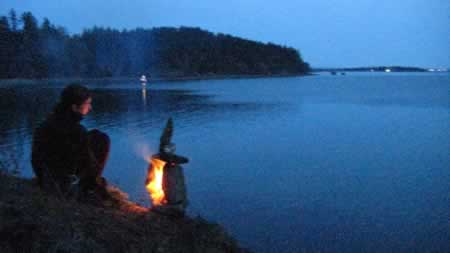 c.1315, in a theological sense, “religious truth via divine revelation, mystical presence of God,” from Anglo-Fr. *misterie (O.Fr. mistere), from L. mysterium, from Gk. mysterion (usually in pl. mysteria) “secret rite or doctrine,” from mystes “one who has been initiated,” from myein “to close, shut,” perhaps referring to the lips (in secrecy) or to the eyes (only initiates were allowed to see the sacred rites). The Gk. word was used in Septuagint for “secret counsel of God,” translated in Vulgate as sacramentum. 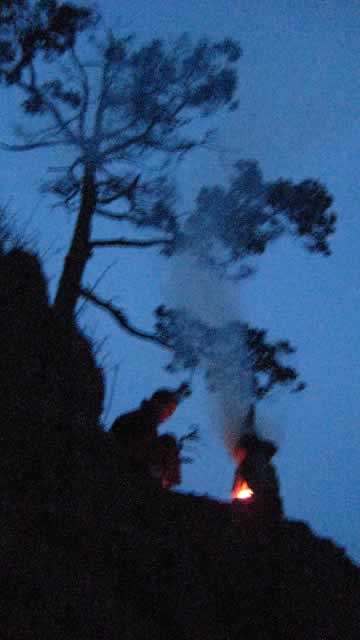 And beauty passes on, as the moon spins through the heavens — time, transiting, ever — to a new view of things. 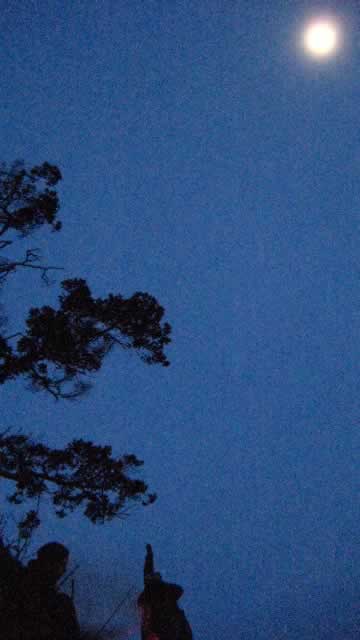 I offer only one thing, to the

nature of the rippling story above.

to be there, find your thing — go in, and see what you can find, in the metamorphosis of meaning.

Tim | GIRVIN decatur island
*Altaring — a word that I
coined for the making of sacramental place.
—
Explore mystery.
Just what is with Tim Girvin’s etymological fluff?
As a student of Latin and ancient languages, you learn something — that words hold deeper mysteries in their meaning, that takes you
right up to the thing.
Ask Phil Harper.

Shadow Brands | The Dark Side of Brand

Looking at the dark side of brand, their strategies and their stories. In the work of finding the heart and soul space of a team of entrepreneurs, their creation, a brand and the story of their founding, their making, and the follow-on telling — community and relationships — sometimes a darker side is found. You…

Brands that are clear. Brands that are fuzzy. Smoky brands, uncertain visioning, vague commitments fuzzy ˈfəzē/ adjective 1. having a frizzy, fluffy, or frayed texture or appearance. "a girl with fuzzy dark hair" synonyms: frizzy, fluffy, woolly; More 2. difficult to perceive clearly or understand and explain precisely; indistinct or vague. "the picture is very…
We use cookies on our website to give you the best experience on our website. By clicking “Accept”, you consent to the use of ALL the cookies.
Do not sell my personal information.
Cookie SettingsAccept
Manage consent