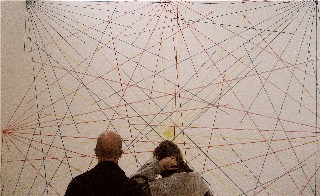 design — the implementation of the signature, the marking, the descriptive curve, has always been that thing which crosses borders — for the sharing of one thing makes its way to another — it’s found here, signed, and extended there…and with that, it’s a wonder full expression of an idea, a marking that crosses borders thousands of years ago, as it passes them now. Ex+change…now!

design [Origin: 1350–1400; ME designen from L. designare “mark out, devise,” from de– “out” + signare “to mark,” from signum “a mark, sign.” Originally in Eng. with the meaning now attached to designate (1646, from L. designatus, pp. of designare); many modern uses of design are metaphoric extensions. Designer (adj.) in the fashion sense of “prestigious” is first recorded 1966; designer drug is from 1983. Designing “scheming” is from 1671. Designated hitter introduced in American League baseball in 1973, soon giving wide figurative extension to designated.

The point, to the discussion, our talk, our sharing -- is really simple. Is luxury, really, luxury? Or merely smoke? Where's the legacy, the story, the craft, the making, the beauty, the powered intensity of focus?? Or are we merely selling the skins of the idea? Where is the heart that was there? Is the…

Scent is the most powerful of the five senses. How can companies use scent to attract customers? How can it be used as a marketing tool? It's important to think of scent as a kind of layering of experience. For example, scent alone won't instantly transform a prospect to a sale, but what it will…
We use cookies on our website to give you the best experience on our website. By clicking “Accept”, you consent to the use of ALL the cookies.
Do not sell my personal information.
Cookie SettingsAccept
Manage consent