I first met Steve Jobs in the 80s. Actually, it was at Stanford. He was there, speaking. And I was there, listening. Afterwards, I went up to introduce myself. And we went from there. I worked on the Macintosh launch and technology story. By, in that instance, test driving the product. Then later working on the identity and packaging — with Steve. And John Casado. John was, back then, the quintessential San Francisco designer. And a good friend, to boot. In San Francisco. After a while, he quit and became a photographer.

In any case, I stayed in touch with Steve Jobs. I worked on other things for Apple. Their early Internet Live! tools. Some kid online community sites (long, long before the idea of a community and online living commune space was really even understood). We worked with Mark Mothersbaugh (Devo founder) on creating — for, and with, Apple — a gigantic laptop on an LA / downtown landmark. We worked on Centris marketing for schools. We created merchandising modeling and prototypes for retail. We designed everything for the Apple Worldwide Developers Conferences for several years. We animated Scully’s presentations, when Steve was pushed out. And while he was out, we worked with him at NEXTcomputer.

And, to reiterate: I’ve stayed in touch.

But the curiosity I have — it’s about this: retail dynamics, culture, community — relationships — and dollars per square foot. And, retail design, cult and cultivation — and dollars per square foot. So, to measure a basic high end luxury modeling, you’ve got this positioning from an expert. A global retail design director (now CEO, someplace else) and friend of mine offers that, on a really good day, main floor Chanel or Louis Vuitton, prime location (like the center of the luxury planet – 5th Avenue and 57th) — would be….“The Chanel boutique on 57th is dramatically higher per sq ft than their location in Soho for example. but, I would say a healthy turn is around $1600 a sq ft. For luxury brands that sell both RTW and handbags the turn on the handbag (main) floor will almost always be higher. A great example of this is LV on the corner of 57th and Fifth Avenue. I would guess that their sales per sq feet are slightly north of $2,000 sq ft. The majority of this is absolutely driven by main floor selling.“

Interesting numbers, of course. What about Apple? 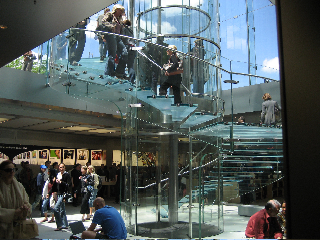 But the numbers ($4,000.00 per square foot) really speak to a cultic connection with relationships — in community — that has been fostered since the 80s.

How possible? Like 24 hours, community warmth, sharing and lingering sensibilities — and shoppers exploring the stores, the stories, the products — at 2am (full!).

And you might say that the opening salvo of Ridley Scott’s 1984 | Macintosh launch, perhaps one of the most iconic (and) memorable spots on the SuperBowl (ever!) was the beginning of spinning the idea of a PaloAlto insiders cultos — people that believe in being different, thinking different, acting differently as part of a community. And Apple seems to be continuously opening the doors in a way that other technology companies simply cannot. (See Dell, Nokia, Sony, for ease of quick reference).

I do believe there’s a cult in Steve. Yet there are likely many people who are Apple commune residents, but they might not really know him if they were sitting next to in a diner. Or the Genius Bar at Apple Store.

I believe that the cult of Apple extends far into the range of thinking culture that is about living creatively — in whatever way you might do that. And while Apple surely isn’t, or likely will not be, number one ever in the global world of technology companies, it will have a special cultic place in the mind of the “ritualist” of Apple tools. And in a way, it will be remembered and loved — whereas, the number one technology group, say: Microsoft, will not be.

Apple does have heart, soul, vitality. It’s eternally youthful somehow. And running the NYC subways to the offices down next to Madison Park, I see the entire miscellany of humanity wearing the ipod headphone nibs, dialing iPhone. No age, no discrimination. Merely everyone. Everyone’s kind of youthful-fully thinking, connecting to the lively innovations of Apple. Being in that world, they share that world. 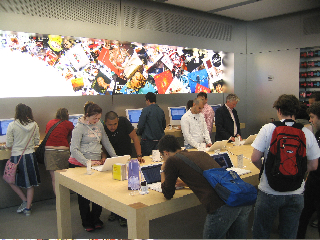 So back to the beginning on that idea of Apple and Luxury. Is there a mass luxury that is now different — than the masstige of mass-produced and pricey icings of others like LV, C, B, others. There’s a conflict emerging. I can smell it: Luxury that’s not really luxury anymore. It’s not special, it’s not rare, there’s no legacy — it’s a flood of engineered branding. The rough DNA is there, but where’s the soul? Where’s the difference, where’s the commitment? The Authority?

Apple? What about the luxury of self-contained and lush experience? Isn’t Apple about that? Lushly delivered experience? Tom Ford signs that new luxury will be the cherishment of time. The luxury of freedom. How does Apple link to that? Luscious connection, beautiful design, craft in making, sensual enthrallment with creative experience. And the savoring of time and freedom.

That is everyone’s right: be | creative. Think | live different.

• The brand starts with the person — and how well that story is told. (It’s all about human[ness]).
• The story should be true — it can have its ups and downs (we’re all human) but get back to the truth.
• The thinking craft of what’s offered should be — beautiful. We all need more beauty. Beauty thrives in an irksome world. Give us a break(!)
• Wholeness and integration — concept, product, conceptual positioning, environment, people that work there and what you get out of the equation.
• The real relationship is about letting people be who they are — and helping them to feel better about themselves. Uplift creates soaring. Brands and people take off.
• Whether it’s online, or built, or both — communing with the like-minded, gathering in community, is one realization of branding that luxury continues to miss.
……

Community and intermingling • “Not only has the company made many of its stores feel like gathering places, but the bright lights and equally bright acoustics create a buzz that makes customers feel more like they are at an event than a retail store.”

Story and storytelling / design, containment and product • “The close attention paid to detail in the stores’ designs, such as the maple veneer tables used for product displays, gives the impression that Steven P. Jobs himself, the company’s co-founder and chief executive, signed off on every square aesthetic inch of every store.”

Retail design / product enthrallment • “Apple’s retail offering is very compelling,” said Andrew Neff, senior managing director at Bear Stearns, “but the other key is the product. The retail concept ties in very much to the product.”

Community and connection • “But the secret formula may be the personal attention paid to customers by sales staff. Relentlessly smiling employees roam the floor, carrying hand-held terminals for instant credit-card swiping. Technicians work behind the so-called genius bar, ministering to customers’ ailing iPods, MacBooks and iPhones. Others, designated “personal trainers,” give one-on-one instruction and lead workshops.

Personal shoppers are available by appointment, and last month the company took the concept of personalized service to a new level, with concierge teams stationed throughout each store.”

The story beyond the selling — welcome, be here • “They’ve become the Nordstrom of technology,” said Michael Gartenberg, vice president and research director at Jupiter Research, referring to the department store that is known for its service.”Mr. Gartenberg said people often first go to an Apple store out of curiosity. “Apparently a lot of them like what they’re seeing in the stores, they like the experience and they go back to buy the products,” he said. The stores’ architecture also makes consumers feel good about spending money there.” “These stores are going to become iconic places that people go to see when they come to New York,” said Mr. Gartenberg, the analyst. “Rockefeller Center, Radio City Music Hall and Apple’s great glass cube on Fifth Avenue.”

• “Ron Johnson, Apple’s senior vice president for retail, said he believed the high level of service played a large role in the success of the stores.

“The idea is that while people love to come to retail stores, and they do it all the time, what they really appreciate the most is that undivided personal attention,” Mr. Johnson said. The result is far fewer qualms among consumers about paying premium prices: $30 for an iPhone case, $200 for an iPod Nano or $1,200 for a computer.

• “Apple stores encourage a lot of purchasing, to be sure. But they also encourage lingering, with dozens of fully functioning computers, iPods and iPhones for visitors to try — for hours on end.”

Check out these referential etymologies on cult, culture, cultivation:

cultivate
1620, from M.L. cultivatus, pp. of cultivare, from L.L. cultivus “tilled,” from L. cultus (see cult). Figurative sense of “improve by training or education” is from 1681.

cult
1617, “worship,” also “a particular form of worship,” from Fr. culte, from L. cultus “care, cultivation, worship,” originally “tended, cultivated,” pp. of colere “to till” (see colony). Rare after 17c.; revived mid-19c. with reference to ancient or primitive rituals. Meaning “devotion to a person or thing” is from 1829.

culture
1440, “the tilling of land,” from L. cultura, from pp. stem of colere “tend, guard, cultivate, till” (see cult). The figurative sense of “cultivation through education” is first attested 1510. Meaning “the intellectual side of civilization” is from 1805; that of “collective customs and achievements of a people” is from 1867. Slang culture vulture is from 1947. Culture shock first recorded 1940.

The most beautiful in the world

Design, in beauty -- is where the application is all the more wondrous. Happiest, holidays -- to you: tsg | nyc+seattle - Times Square, New York Before the ball drops in Times Square, the Big Apple turns on its holiday charm with the Christmas tree in Rockefeller Center. This snow-globe-worthy scene celebrates its 75th anniversary…

1. How did you get your start? My start? Raw curiosity for one. That's where it all started, that drove, and drives everything that I am made of. I am one that is easily enchanted by content. I can be ignited in a moment, if the right spark is there. A love of the exploration…
We use cookies on our website to give you the best experience on our website. By clicking “Accept”, you consent to the use of ALL the cookies.
Do not sell my personal information.
Cookie SettingsAccept
Manage consent