Art as Brand: Jeff Koons at the Palace of Versailles

There’s been a far amount of energy being wrapped around the concept of Jeff Koon’s installation at Versailles. Of course, the idea is that the installation might be, perhaps, inappropriate. Some might call it too commercial, given Mr. Koons’ love affair with iconic and rather materialistic sentimentality. He describes that way, so I can support his contention. That is where he lives, in his art. Being commercially sentimental in intention, I’d surmise that it’s almost more like branding, Koons and his “products”. There’s a marketing premise there.
And, perhaps of course, (as well) the French are a little distressed by the idea of the idea of such a iconoclastic presence would be evince in the rather preposterous character of Koon’s work in a place of such solemnity, beauty and classically French spirit — the Palace at Versailles.

And, of course, I disagree. 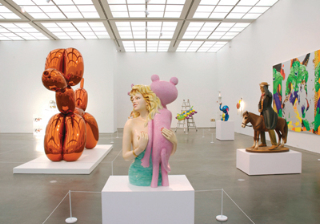 According to Graham Bader, a professor of art history from Texas — “In April 2004, the New York Times Magazine published an excerpt from the then forthcoming book by David Brooks, the newspaper’s main op-ed purveyor of commonsense banalities. Titled “Our Sprawling, Supersize Utopia,” the essay argued that exurbia—that land of megachurches, McMansions, and endless fields of perfectly groomed grass—was a uniquely American heaven on earth. This paved idyll, Brooks contended, is driven by what he termed “the Paradise Spell”. 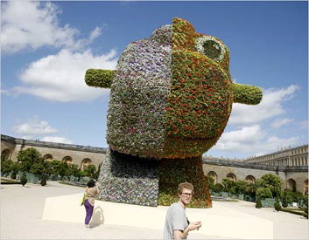 And the proposition is that this is the land that Jeff Koons lives in. Spellbound.

David Brooks remarks, that the Spell is “the tendency to see the present from the vantage point of the future. It starts with imagination—the ability to fantasize about what some imminent happiness will look like. Then the future-minded person leaps rashly toward that gauzy image. He or she is subtly more attached to the glorious future than to the temporary and unsatisfactory present.” 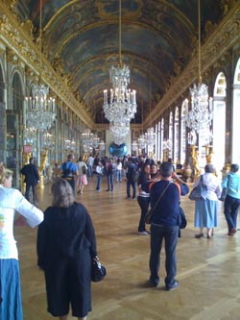 Some people do, perhaps, “have a fondness for smiling proletarians on tractors” and colonies of workers happily singing on the way home from the fields, sun blazing in harvested glory. But the spell he defines is nothing less than the guiding precepts of an aesthetic proposal of socialist realism — be it “soviet” or “sino” – or perhaps any socialist order. According to Stalin’s cultural commissar Andrei Zhdanov, socialist realism aimed to peer far beyond the lifeless expressions of the present reality to “catch a glimpse of our tomorrow” Thus capturing the imminent happiness of “reality in its revolutionary development” — according to Bader’s incisive remarks. I’m not sure that he really likes Koons’ work. 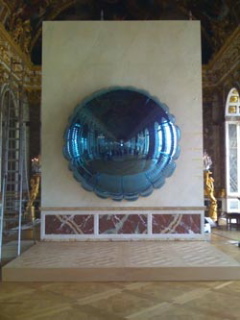 I’d agree with that assessment of Koon’s work, as art . He, too, personally defines his “aspiration to create work that functions as “a powerful vehicle for self-acceptance and a democratic tool to transform the world”; the catalogue praises his celebration of “comfort as the ultimate way to achieve salvation”; and the artist himself, in a foyer video, discusses art’s ability “to let people know that everything about them is perfect”.

I can’t surmise that there is anything particularly intellectual about Koon’s work, but his goals, and his way of framing them, and articulating their “benefits” are interesting enough. “Be happy, look at my work”. 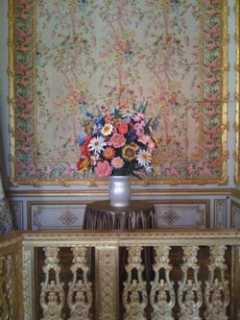 But what I wonder about is the idea that the work (what I’d call the brand presence) of Jeff Koons — according to the French — is inappropriately out of order with the highest principles of the styling of Versailles. By the reviews of the NYTimes, as well as French papers, there has been dissent. “Not everyone here was as pleased by the installation. Several dozen people demonstrated outside the palace gates early Wednesday, a protest organized by the National Union of Writers of France, a little-known, right-wing group dedicated to artistic purity in France. The exhibition “strikes at the heart of a civilization” and “is an outrage to Marie Antoinette,” said Arnaud-Aaron Upinsky, the group’s chairman. He has called the exhibition “a truly sullying of the most sacred aspects of our heritage and identity,” and in an open letter in July to the minister of culture, Christine Albanel, he demanded that the exhibit be canceled.” I’m not sure about that — to my take, there are alignments. Another lofty voice of dissent comes from Edouard de Royère, creator of the Fondation du Patrimoine and one of chateau’s principal patrons. “I am not against contemporary art but I am absolutely shocked at its descent on Versailles, a magical, sacred place,” he said. “Any tourist that comes from China or Australia will go home with this extraordinary picture of France. Even for three months, Jeff Koons at Versailles is a mistake.” 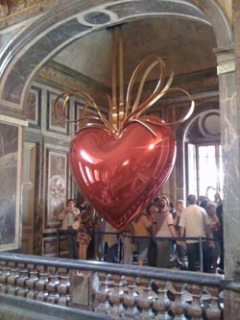 The Guardian’s Lizzy Davies comments, noting the concept of a cultural betrayal of the French sensibilities, “Koons has faced down all these accusations ahead of his first major Gallic show with typical nonchalance. But he is convinced he is bringing a new energy to Versailles – and that, contrary to his critics’ assertions, he is not just an ‘agent provocateur’.” 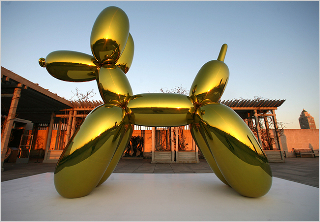 Koons at the Met, rooftop (NYTimes)

To Koon’s take (and it’s an interesting one, considering the mid-career challenges he’s faced) on contemporary art is that it “is so imprisoned in the present that juxtaposing new works with old ones allows you to rediscover a connection between history and the history of art,” he mused to AFP. “The baroque is the ideal context for me to highlight the philosophical nature of my work.” Right on, I’d venture.

That’s where I’m going. Broke baroque. What my sense is that Koons’ sensibilities are, in fact, quite in line with the design ethos that bore the origination of the design of the French conceptions of royal housing and party suites. 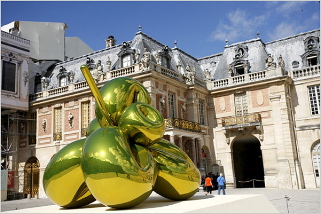 His work is a kind of party, in itself. And, given its alignment with the sentimentality of gaudy — yet “happy” — objects, it fits right in. 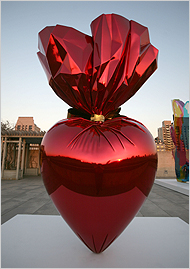 Art and architecture in France in the early 17th century are generally referred to as “Baroque”. From the mid to late 17th century French art is more often referred to by the term Classicism which implies an adherence to certain rules of proportion and sobriety uncharacteristic of the Baroque as it was practiced in Southern and Eastern Europe during the same period. There’s some formal attribution of discipline and order in the work of the French Baroque designer portrayal. 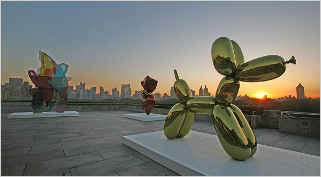 However, there are differences — under Louis XIV — the Baroque as it was practiced in Italy was not in French taste (Bernini’s submitted proposal for redesigning the Louvre was rejected by Louis XIV.) The travails of time continuously morphed conceptions, as well — as Wikipedia defines: “Through propaganda, wars and great architectural works, Louis XIV launched a vast program designed for the glorification of France and his name. The Palace of Versailles, initially a tiny hunting lodge built by his father, was transformed by Louis XIV into a marvelous palace for fêtes and parties.” And there were designers that were up to the challenge — for example, architect Louis Le Vau, painter and designer Charles Le Brun and the landscape architect André Le Nôtre engaged in wholesale transformations — they “created marvels : fountains danced; wandering revelers discovered hidden grottos in the gardens”, and the environment celebrated the very principles of Baroque stylization.

Historically, the opening ignition of design transformation of the grounds of Versailles is linked to the private château Vaux-le-Vicomte built for Louis XIV’s minister of Finance Nicolas Fouquet. And it was party related: “having offered a lavish festival for the king in the newly finished residence in 1661 (Le Brun, Le Vau, Le Nôtre, the poet La Fontaine, the playwright Molière were all under Fouquet’s patronage), the minister was accused of misappropriation of funds and was sentenced to life imprisonment. The architects and artists under his patronage were all put to work on Versailles.” A kind of change in employment that pushed these designers to build, anew, specifically for the king. A happy shift for them, a hapless transition for the minister of Finance, Fouquet. He went one way, they, another… 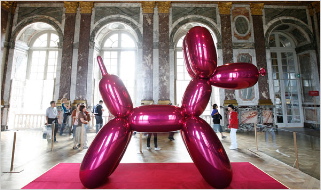 But it’s in this kind of partying atmosphere, grounds designed to vaunt lavish principles of the Sun King’s order, that created the ultimate grounds of Versailles, as well as the spirit of the French movement of Baroque intention. 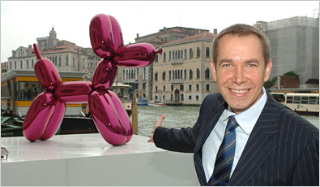 Exploring the illusory: branding ghosts and the veil of what is beyond... I'd been fascinated by the concept of the ghost – and the ghostly – for decades, since I was a kid. The magical, the mystical, the mysterious. Actually, my first big book purchase, happened at 10 years of age, I'm guessing. Personally, it…

Tom Barbitta is a friend of mine. A friend, as a client -- a friend as an fellow explorer of story. A brand explorer. He believes in the power of story as a link to building relationships with people. Brand, in story, is solely about that -- linking people to products that have embraceable character.…
We use cookies on our website to give you the best experience on our website. By clicking “Accept”, you consent to the use of ALL the cookies.
Do not sell my personal information.
Cookie SettingsAccept
Manage consent