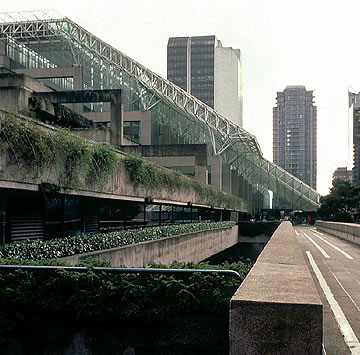 A passage — the journey built — the life’s journal in design

I met Arthur here, at Robson Square, decades ago, in a building of his design, while I was speaking on design, to a group of designers. Design, designer, designed.

And that triad of connections speaks to me about how these happen — a knot-making, a concatenation, the layering and plait-work that weaves us together, and allows that tapestry of beauty — firm, or frayed, that brings us together.

I’d referenced that idea of concretion — in two levels of allegory. For one, it’s the gathering, the solidification — the shoring up of ideals; and then, two, it’s the spirit of Arthur’s work, which has been called a poetry of concrete — modern materials, concreted — yet designed in invisible, silenced motion. There is a rhythm that is part of the patterning of his work and in that formalism, there is a kind of iconic character that reaches to the spirit of the ancient principles of place-making. There are forms that reach out from the past, fortresses, extrusions of containment, temples entrances, concourses of journey, vehicles and vessels of inspirations.

Concrete, while seemingly modern, is not.

And therein the fusion — the ancient principles that reach to the present, the cosmographical building — something antiquated and symbolically profound — newly remade, today. The entries to visions that stretch beyond. Concretion is about elements that come together, the curve of the drawn, the gathered, grown together. The word: concrete (as adjective) comes from the most recent use, more than 600 years ago — in 1471, from the Latin concretus, of concrescere “to grow together,” from com– “together” + crescere “to grow” (and it’s worth reaching further, in this symbolic exploration to consider an alignment: crescent*). A logicians’ term until meaning began to expand 1600s. Noun sense of “building material made from cement, etc.” is first recorded 1834. 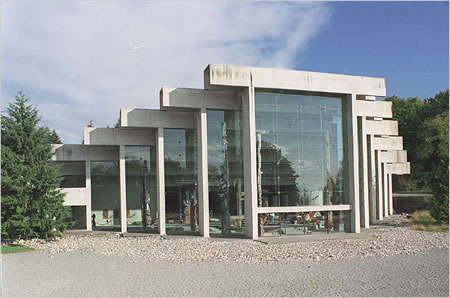 A photograph by Bayne Stanley — Arthur Erickson’s Museum of Anthropology at UBC — an iconic installation, a portal into sanctified ground.

What that means, to my reflections about Arthur Erickson’s work — it’s about the journey of the man, the architect, the builder, who in the highs or lows of a career spanning decades, was really about that – the visionary wonders of a man that reached to the stars, and dwelt among them, a designer who returned to his roots, grounded again — and rose finally in reflective wonder to the simple elegance of ideas newly regained.

Like all of us, it’s a journey. That reflection from day to day, hour to hour, moment to moment — in the running range — the exploration of beautiful creativity.

Added references to “concrete” below*

* The heart of concrete: crescent and the seed of “grow” —

Centuries ago –1399, from Anglo-French cressaunt, from Old French creissant, from L. crescentum (nom. crescens), pp. of crescere “come forth, spring up, grow, thrive,” from Proto Indo European base *ker- “to grow” (creating the foundation for the Latin Ceres, the goddess of agriculture, creare “to bring forth, create, produce;” Greek — kouros “boy,” kore “girl;” and the Armenian serem “bring forth,” serim “be born”). First applied to the waxing moon, luna crescens, but subsequently mistaken to mean the shape, not the stage. Historically, it’s seen as a badge or emblem of the Turkish sultans (probably chosen for its suggestion of “increase”); figurative sense of “Muslim political power” is from 1589, but modern writers often falsely associate it with the Saracens of the Crusades or the Moors of Spain. Horns of the waxing moon are on the viewer’s left side; those of the waning moon are on his right. Croissant is the modern French form of the word. The original Latin sense is preserved in crescendo, borrowed 1776 as a musical phrase from Italian, from Latin crescendo, ablative of the gerund of crescere.

Jorge Colombo | cover illustration, the New Yorker, June 2009 Starting at the beginning, the mouse, the magic, the drawn and the digital. Of course, really, it all starts here, in drawing -- the touch of the fingers, with insight, interpretation and meditation. Then the hand, the fist, the wrist, the forearm, the shoulder, the…

Fire, the long river and the mist in the motion in learning Some time back, I was speaking (and working with) with a writer -- Kurt Dahl, a IT manager and strategist then for Nordstrom, about the idea of the future of the book. He didn't really believe in the book -- per se, as…
We use cookies on our website to give you the best experience on our website. By clicking “Accept”, you consent to the use of ALL the cookies.
Do not sell my personal information.
Cookie SettingsAccept
Manage consent