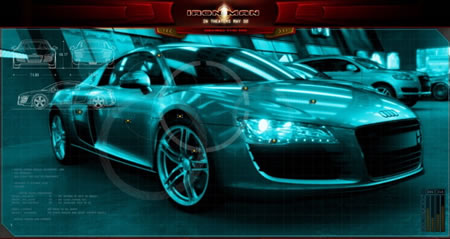 Automobiles represent a fabulous concretion of brands synchronized to complex emotional and value constructs. Cars contain far more than conventional brands, they are emotive in the context of containment. They exemplify a sense of positioning, character, self esteem and personal brand positioning. For many, the car is the person, the person is the car. Not that everyone can hold a car in such self connection, but many do, and in the positioning strategy of car brands, distinct links to demographic comprehension. 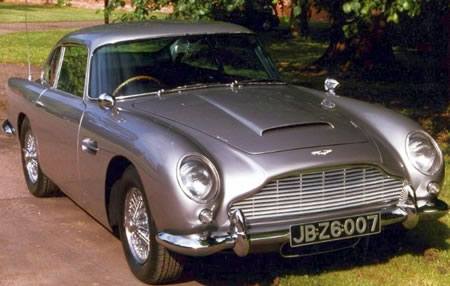 But it’s interesting to consider the modeling of such powerful brands being linked to the storytelling of motion pictures. One might proffer that the link between automobile charisma, the implied sense of masculine force and a human brand could begin with James Bond, in 1962. The first car, a Sunbeam Alpine 1961 Series II. Not particularly memorable at the beginning of this 22 film megabrand. Surely, the Aston Martin (shown above) offers a more immediate and obvious connection, but in fact, dozens of cars have been driven, a sampled listing of James Bond automobiles here. 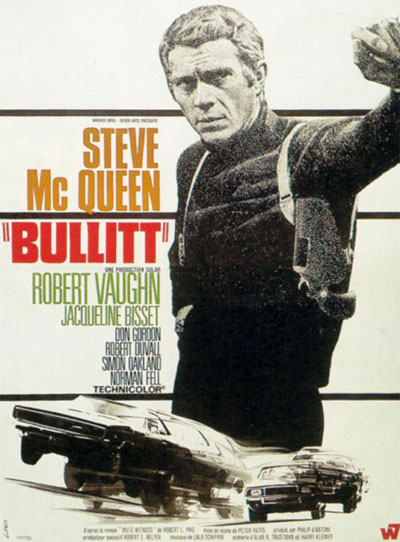 This follow up could be linked to Steve McQueen, in 1968. In a manner, the very essence of his brand persona captivated the link between man and car, the Ford Mustang GT Coupé. The empowerment of the mythic hero archetype might be authentic — he drove it. The YouTube view shows there’s continued enthusiasm, given it’s been viewed nearly a million times.

We’ve reflected on car power, as well, in the structuring of Transformers, a series of literal personalities (the Transformers themselves) that gyrate and reassemble in their modeling from power cars and trucks to large robotic forces, for good or bad. That alignment of what is described as muscle, sex and memory gets to the heart of American cultural connections to the power of the car as a holistic framing of brand and psyche.

The point relates to the idea of embracement, the notion that people can develop very distinct relationships to their personal sense of self impression that have profound kinesthetic attachments to what they own. And next to a place to live, the car is at the top of acquisitional value.

It’s interesting, then, to study in the newest high-tech thriller, the alignment between Audi and Iron Man. Why? Because as a leveraged brand asset there’s a distinct link to informing design strategy with the industrial design of a film character, as well as a key asset, the vehicle that this character drives. It’s not the first time that Audi has sought this kind of investment. Bond was first. 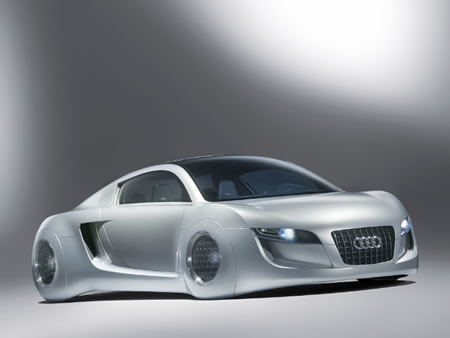 This was followed by Will Smith’s specially designed Audi of the future in iRobot. According to Supercars.net, “For the first time ever, Audi developed a car specifically for a major Hollywood motion picture. Audi engineers created a car for ‘I, ROBOT’s’ incredible world of 2035.

The resulting Audi RSQ sport coupe is a visionary interpretation of Audi’s typical design language. The most important thing was that despite its extreme character the car should still be recognized as an Audi. The cinemagoer will therefore see the new Audi front-end with the typical single-frame grille in the movie.

The RSQ includes special features suggested by movie director Alex Proyas. The mid-engined sports car operated by the story’s police department, races through the Chicago of the future not on wheels but on spheres. Its two doors are rear-hinged to the C-posts of the body and open according to the butterfly principle. In addition to the RSQ concept car, Audi supplied further series-production cars which appear – in disguised shapes – in the movie’s traffic scenes. Audi also supplied the interior mock-up used for interior car scenes.” 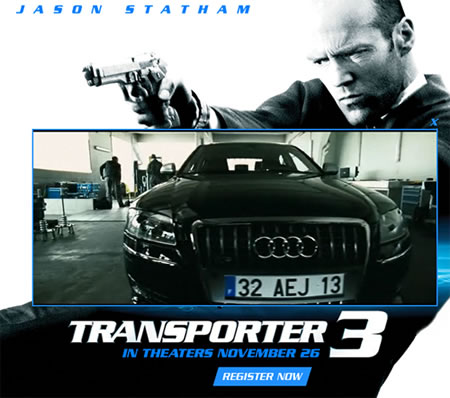 Image credit:The next grouping might be Luc Besson‘s inventive treatment of The Transporter, Jason Statham’s portrayal of Frank Martin — a driver that  “transports” dangerously valuable cargo in a series of Audi vehicles.

Cars and men, and the connection to muscle, as well as sex, is surely lined up in these “vehicles.” 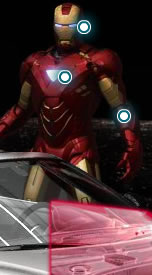 Finally, Iron Man. The link to design thinking and the positioning of the film, in relationship the industrial design imagination of the Iron Man armament might be seen in this link between the two. 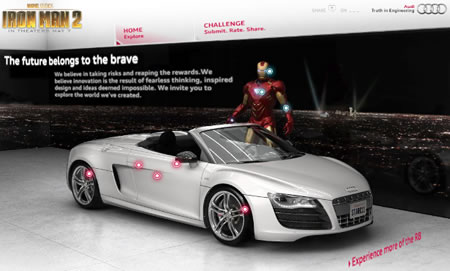 But more so, appropriately, Audi has defined their brand around the brand of Iron Man — they’re linked: “The future belongs to the brave.” They continue, “We believe in taking risks and reaping the rewards. We believe that innovation is the result of fearless thinking, inspired design and ideas deemed impossible. We invite you to explore the world we’ve created.” 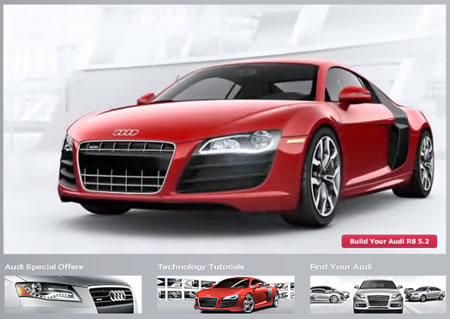 Iron Man 2 features the Audi R8 Spyder — and luxury, to Tony Stark’s positioning is surely the character of the car, starting at $146,000.00.

While the concept of creating seeming brand alliances is common in the instance of consumer packaged goods, reaching into the realm of luxury is less frequent, unless there’s a perception that the concept of the brand — in the space of luxury marketing — could be seen as relevant to the demography of the film, the character and “merchandising story.” It’s an intriguing link, but perhaps resonance exists to the notion of fearlessness that drives their brand, which might be, just as well, Tony Stark’s brand: Iron Man. In fact, jump into Stark’s lab and build your own vehicle. 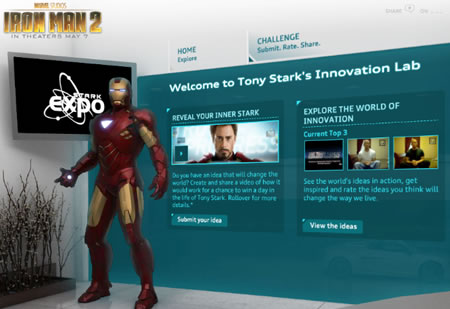 Art, branding and jewelry I had an experience in working with the fragrance group at Bulgari, along with another friend, an executive marketing partner there, that moved on to build the brand Gilt. Recently, the concept of exploring the art of jewelry and its relationship to brand has come into increasing study at Girvin, in…
We use cookies on our website to give you the best experience on our website. By clicking “Accept”, you consent to the use of ALL the cookies.
Do not sell my personal information.
Cookie SettingsAccept
Manage consent