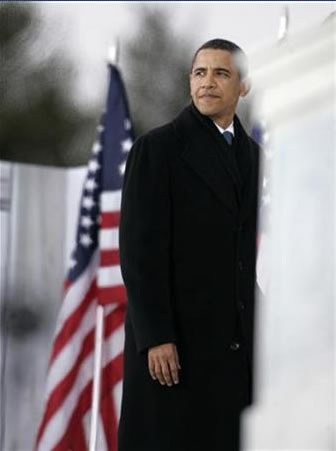 This morning, early, a deep mist is crossing the channels of Puget Sound — and the foghorns are calling out. I believe they are saying — “I’m over here. Don’t come over here”, or something like that. Which has been contrary to our experience in learning about any variety of candidates, over the last number of months, until the earliest moments of 2008, November. They all have called, “I am here. Come to me.”

But I’m not writing, today, along with the millions of others that will be exploring every attribute of the Inaugural events of the day. Or for the last several days of events and parties, or the Rodriquez dress that Michelle is wearing, or the White House >Dog, or the broad-ranging, monstrously complex, if not wholly terrifying issues that President Obama shall >face. I’m not expert enough to comment. Except on one thing.

The word, augur. I am an excavator of words, their roots, where they come from — and, speaking to the etymon, the ancient Greek expression, the true meaning of the word. For in the root is just that, the heart and the true meaning. So, speaking of hearts, and the mystical originations of the concept of inauguration — and our transitions today, I offer these, in sequence, for your auspicious interpretation.

augur
c.1374 (implied in augury), from L. augur, a religious official in ancient Rome who foretold events by interpreting omens, perhaps originally meaning “an increase in crops enacted in ritual,” in which case it probably is from Old L. *augos (gen. *augeris) “increase,” and is related to augere “increase” (see augment). The more popular theory is that it is from L.avis “bird,” since flights, singing, and feeding of birds or entrails from bird sacrifices were an important part of divination (cf. auspicious). The second element would be from garrire “to talk.” The verb is 1549, from the noun.

august
1664, from L. augustus “venerable,” probably originally “consecrated by the augurs, with favorable auguries” (see augur); or else “that which is increased”.

contemplation
c.1225, from O.Fr. contemplation, from L. contemplationem “act of looking at,” from contemplari “to gaze attentively, observe,” orig. “to mark out a space for observation” (as an augur does). From com- intensive prefix + templum “area for the taking of auguries” (see temple). Originally in Eng., “religious musing.” Contemplate is from 1592; contemplative is from 1340.

temple
“building for worship,” O.E. tempel, from L. templum “piece of ground consecrated for the taking of auspices, building for worship,” of uncertain signification. Commonly referred either to PIE base *tem- “to cut,” on notion of “place reserved or cut out,” or to PIE base *temp- “to stretch,” on notion of cleared space in front of an altar. Fig. sense of “any place regarded as occupied by divine presence” was in O.E. Applied to Jewish synagogues from 1598.

tabernacle
c.1250, “portable sanctuary carried by the Israelites in the wilderness,” from O.Fr. tabernacle(12c.), from L. tabernaculum “tent,” especially “a tent of an augur” (for taking observations), dim. of taberna “hut, cabin, booth” (see tavern). Transfered 1388 to the Temple in Jerusalem (which continued its function). Sense of “house of worship” first recorded 1693. The JewishFeast of Tabernacles (mid-October) was observed as a thanksgiving for harvest.

auspicious
1596 (implied in auspiciously), “of good omen,” from L. auspicium “divination by observing the flight of birds,” from auspex (gen. auspicis) “augur,” lit. “one who takes signs from the flight of birds,” from PIE *awi-spek– “observer of birds,” from *awi- “bird” + *spek– “to see.” Connection between birds and omens also is in Gk. oionos “bird of prey, bird of omen, omen,” and ornis “bird,” which also could mean “omen.” Auspice (usually pl.) “influence exerted on behalf of someone or something” is from 1637.

Here’s to chance, to change, to the power of the rightful interpretation in the passage of today’s event — truly extra-ordinary, as it shall be. As we, as a world, evolve today to another plateau of experience – carried aloft of the wings of a great bird — one that we all admire and revere, now newly seen and experienced, the dazzling character of its wingspread, now newly comprehended and held in full.

Here’s to that cast, our reading of the right runes, and a new wonderment, for us all.

tsg | from the Waterfront, downtown Seattle | 4.15am

Exploring the ideation of identity in theatrical advertising What is it about dogs? How is it, after thousands of years, we have this undeniable link with dogs? We immediately attach personality to them. We see something in dogs? And we see, perhaps, something of ourselves? There's some framing of personality that suggests an alignment between…

Defining story, brand and environment -- in synchrony. Finally. When I was working in Paris, several years ago, I'd connected with Serge Trigano, talking to him about a series of projects. Serge comes from the family that originated ClubMed -- a wildly successful innovation, that essentially revolutionized the concept of vacationing club-type adventures and specialized…
We use cookies on our website to give you the best experience on our website. By clicking “Accept”, you consent to the use of ALL the cookies.
Do not sell my personal information.
Cookie SettingsAccept
Manage consent