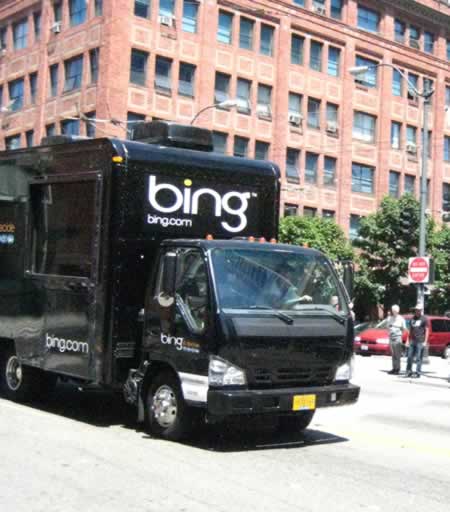 Thoughts on bing, the new search engine for Microsoft

Just days ago, the kick off.

According to the overview from Microsoft, “the idea behind ‘Manifesto’ is to elicit an emotional response about a concept that is decidedly not emotional.” And it’s a tough call, to marketing that premise.

“While everyone was searching, there was bailing; while everyone was lost in the links, there was collapsing,” the voice-over begins, amid montages of Google-owned YouTube videos that have become the butt of jokes everywhere and dethroned executives exiting office buildings. It continues: “We don’t need queries and keywords if they bring back questions and confusion. From this moment on, search overload is officially over.”

While pages of results on search giant Google or No. 2 Yahoo certainly didn’t cause the current economic meltdown, Gayle Troberman, general manager for advertising and customer engagement at Microsoft, said the idea behind the ad was to tap into the current zeitgeist and elicit an emotional response about a concept that, on its face, is decidedly not emotional.

“Search has been about number of results and access to everything, and when you talk to people, they don’t want everything anymore,” she said. “Less is the new more. … [People] want the right things for them.”

I wondered about that idea of search engine. What, really, does that mean? An engine that searches comes to an immediate definition. It’s more complicated than that, of course, there are other levels of detail — here:

A Web search engine is a tool designed to search for information on the World Wide Web. The search results are usually presented in a list and are commonly called hits. The information may consist of web pages, images, information and other types of files. Some search engines also mine data available in databases or open directories. Unlike Web directories, which are maintained by human editors, search engines operate algorithmically or are a mixture of algorithmic and human input.

History offers how formidable is this exploration:

And, to that sequenced exploration, you might consider Wolfram|Alpha — for a differing form of query.

More, on the sequencing — “before there were web search engines there was a complete list of all webservers. The list was edited by Tim Berners-Lee and hosted on the CERN webserver. As more and more webservers went online the central list could not keep up — the compositing of data storage simply outgrew. On the NCSA site new servers were announced under the title “What’s New!” but no complete listing existed any more.”

As today, most of the early searching tools were based on the work of students, a framing of inventiveness that continues to this day. “The very first tool used for searching on the (pre-web) Internet was Archie. The name stands for “archive” without the “v.” It was created in 1990 by Alan Emtage, a student at McGill University in Montreal. The program downloaded the directory listings of all the files located on public anonymous FTP (File Transfer Protocol) sites, creating a searchable database of file names; however, Archie did not index the contents of these sites.

The rise of Gopher (created in 1991 by Mark McCahill at the University of Minnesota) led to two new search programs, Veronica and Jughead. Like Archie, they searched the file names and titles stored in Gopher index systems. Veronica (Very Easy Rodent-Oriented Net-wide Index to Computerized Archives) provided a keyword search of most Gopher menu titles in the entire Gopher listings. Jughead (Jonzy’s Universal Gopher Hierarchy Excavation And Display) was a tool for obtaining menu information from specific Gopher servers.” And onwards it goes — there is spectacularly detailed information available, and I won’t waste your time with recounted quotations and text draws.

Searching, seeking, finding. More, to examination here:
A search engine operates, in the following order:
1. Web crawling
2. Indexing
3. Searching
Another overview of interest lies here — an ongoing study of search engines, how they work, what’s happening and too, where they are going: SearchEngineWatch.

All this might be considered a meagre backgrounder – and my work is more about context, use visualization, brand and delivery — and what it looks and feels like, and less to the staggering content of the history of this technology. There are many others, far more qualified to comment on technological history and values of the engineering. 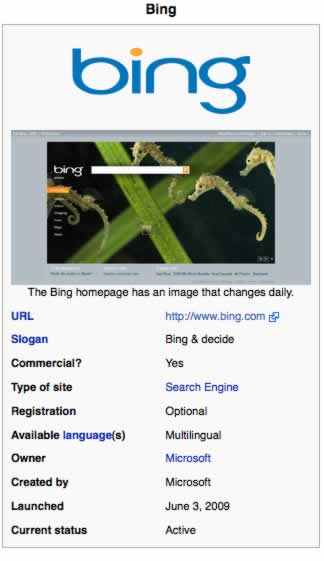 In the spirit of first impressions, Microsoft’s decision maker site / search engine doesn’t actually look much different structurally from Google. Search bar on the top, a scrolling list of resulting outcomes. There are categorical refinements on the left, that further differentiate the tool — and certain search analyses exceed the capacities, so-called, of Google. The idea is about answering questions right off the inquiry page — not requiring a deeper search into the links displayed — their strategy focuses on “being a “decision engine” vs. a search engine. Jon Tinter, general manager of strategic partnerships in Microsoft’s online audience business group, said the idea is to shift work from consumers to search engines, by answering more queries on the search results page, without having to click through to a result.” AdAge

According to the press positioning, “people don’t believe there are any problems with how they search. Most consumers say they are satisfied with search today, but Microsoft says its own behavioral studies of what people do when they go online and type in queries indicate otherwise, as people often spend lots of time tweaking queries and, in some cases, abandon them altogether, unable to find what they’re seeking.”

“We’ve been lulled into thinking it’s OK to spend two hours doing something that should have taken a few minutes,” said Ty Montague, co-president and chief creative officer at JWT North America, the agency producing the ads as part of an $80 million to $100 million marketing push. Personally, I’m not convinced that I spent any less time searching for items on bing.com, than I spent on Google, trying to find content on bing. 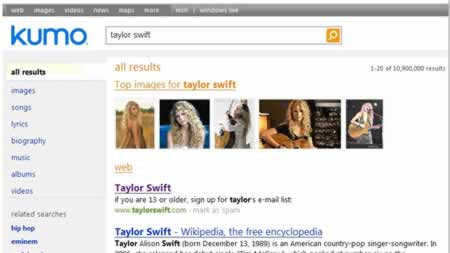 The original modeling, Kumo, was an expansion on Microsoft’s earlier iteration in development, Live Search. 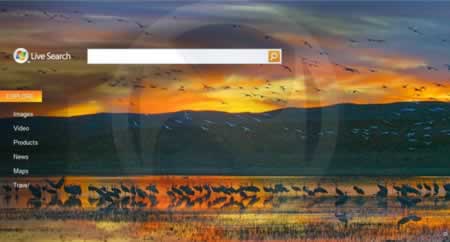 In the final examination, to intention, bing.com differentiates from Google with an added insight and improvement on searches for health, local news, products and shopping as well as travel. 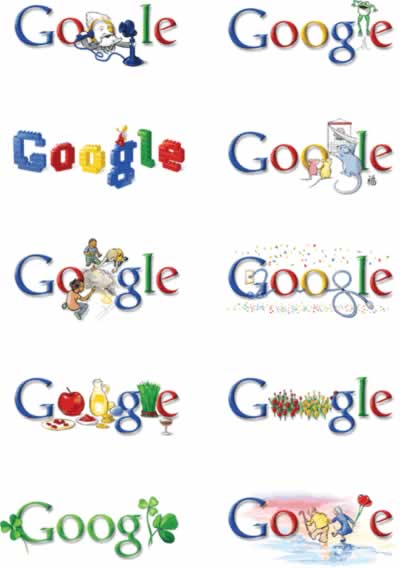 to the stretched font, and implied ellipsoid geometry of bing.

Bing doesn’t say much of anything.

Well, I could be wrong, according to Interbrand, the namer of Bing. Branding shop Interbrand helped conceive the name, which was chosen because it was memorable, easy to spell around the world and could be used as a verb, as Microsoft hopes to convert people from “Google it” to “Bing it.”

Finding words like that these days “is getting harder and harder,” said Paola Norambuena, senior director-head of verbal identity at Interbrand. She added that linguistically Bing had a lot of applications. “It’s the sound of found.”

Others disagree. Saul Gitlin, EVP Strategic Services | Kang & Lee, offers —
“There has been alot of media attention in the United States about Microsoft’s announcement of its new search engine called “Bing.” The New York Times ran an article last week about the choice of the name, “Bing,” and the paper quoted several ‘marketing experts.’ Some of them liked the name because it makes people think of the possible “sound effect” when a web user finds something. But other “experts” complained that the name does not mean anything….in either case, these opposing opinions are from people who speak western languages. Steven Ballmer of Microsoft was quoted in the article as saying that the name works well all over the world……but I’m not convinced!

One dramatic example: the syllable romanized as “Bing” holds many meanings in Chinese – the most common of which are 冰 (‘ice,’ ‘frozen’) AND 病 (‘sick’)。Quite obviously, NEITHER of these would be appropriate associations for a dynamic search engine, and one that wants to challenge Google.

Just imagine the common question posed by Chinese web users, “你Google了没有？“ (‘Have you Googled it?’) If we replace the name Google with “Bing”, we would get the common, colloquial query, “你病了没有？“ (‘Are you SICK?’) 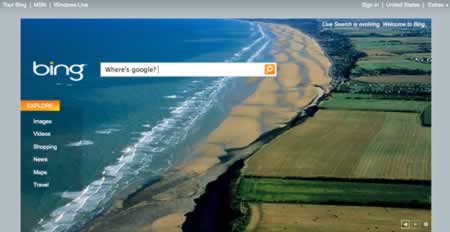 To the sense of interface experience, I like the idea of imagery as a substrate — and that it consistently changes. In a manner of exploration, which I do incessantly, the idea of some lively burst of color is refreshing. But then the translation — my take — reverts to classical itemization of found content. Not so amazing.

A quick search on google, for bing.com, inquires:

There are others that delve more analytically into the heart — and the heat — of comparison between the current titan, and emerging contender, interface exchange, here.

Culturally, there are even deeper challenges — and that is in the spirit of the Microsoft brand and the Google community. There’s something quirky, yet wise in the character of Google. The founder’s spirit, nerdy, inventive, fun-loving and quietly adventuresome in a larger dynamic of corporate ethos is more binding — in a heart-full way — than Microsoft. They are the proverbial “follower” in this instance, while Google is still culturally framed as the youthful inventor, wryly imaginative and mirthful.

Persona. I go back. Mask is, interestingly enough, the seed syllable of the Etruscan word, the precursors to the Romans, on Italian soil. And I think about that — in brand; what’s the mask, the story beneath — and who’s behind it? 1917, Jung defined the persona as an outward reflection of human or social personality. I’d contemplate the status of Bing.com — and Goggle — way.

Circa 1225, from O.Fr. persone “human being” (12th century, Fr. personne), from L. persona “human being,” originally “character in a drama, mask,” borrowed from Etruscan phersu “mask.”

It’s intriguing, to use the idea of the heart of a word, 3,000 years old as something to meditate on in the observation of brand presence. The heart, the story, the mask.

Who are you? A question, two answers: 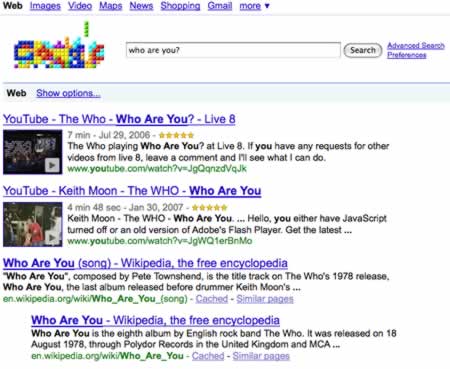 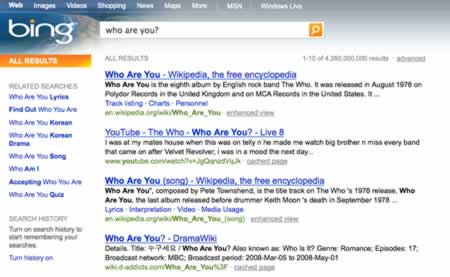 Try bing. Let me know what you think. 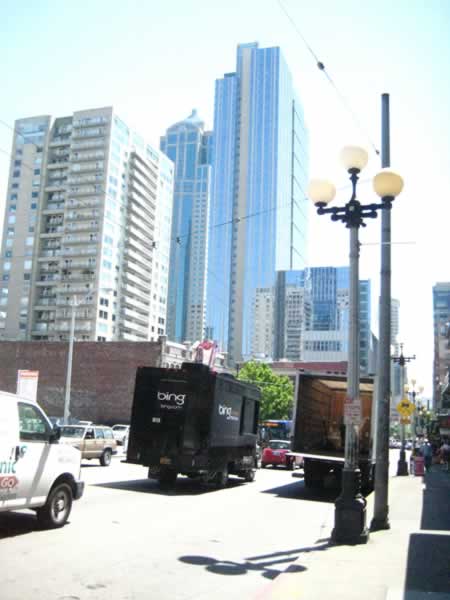 Photograph Peter Haley ©2009 The creation of sound, in place, made Decades ago, I was both a student, then instructor at Fort Worden. There were some amazing encounters -- George Tsutakawa, Karen Guzak, Mary Ann Peters, Barbara Schwartz, Elaine DeKooning, Sam Hamill and others. It was about working together, learning, exploring, painting and negotiating the…

What brands face, in Facebook? Many, if their culture is robust enough... In the metaphor of communing, there are layers -- circles -- of connections that we have with each other and our friends. A drop, ripples. Stories are told -- they are shared, and they spread, increasingly, to community -- in the medium of…