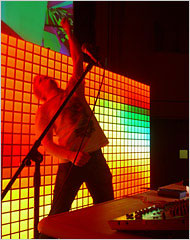 I had, we had, this job working for Nintendo, which was really about doing mostly packaging for new launches. For about 6 years, that grouping of projects. Hardware gaming packaging design — and all licensee and Nintendo product launches. It was interesting doing that, because there was always the Japanese cant to it — that is, we did the packaging for the US and European markets, but we still had to refer everything to Japan. We did the work for all the major gaming systems up to Nintendo 64, the Ultra — including the US launch of GameBoy. But what I’d be fascinated by, as well, was the noise, the sound design, of the games, and the funky computer sounds that played the moves of the gaming play and movement dynamics.

Interestingly enough, there was a woman that shall be named Judith, that was working in Japan; and she was a friend. I think that she was married, but I could never really tell. She’d written a book on Japan that suggested that if you could speak everything in English, with a Japanese accent, most Japanese would understand you. And I’d studied Japanese to push that understanding further. And she might’ve been partially right. There are, as perhaps you know, a grouping of words that are from multiple languages that have been pulled into the Japanese vocabulary — there’s even a special grouping of characters for this written interpretation.

But she taught me about this funky Japanese band that were three innovators — and two of them made gaming noises — Hiroshi Hosono, Yukihiro Takahashi and Ryuichi Sakamoto. They were the key instrumentalists, nearly all digital chipping / blipping sound, for the Yellow Magic Orchestra, which was a digital sounds, computerized sampling effects vortex in Japan, and parts of the rest of the world then (78-83). They were number one in Japan, during that time. 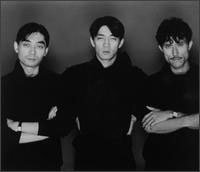 There have been reunions, as well.
http://www.youtube.com/watch?v=oHOgsQZZ6Ck

Sakamoto went on connect with film, (opposite David Bowie in “Merry Christmas, Mr. Lawrence”) and increasingly obscure, and sometimes beautiful takes on musical experiments — mostly piano. Hosono went off to do other experiments. Takahashi — the same.

But a lot of that chippy, blippy sound, that fuels the then simplistic gaming computer engines — comes from a technology like these. Others in that space, that time period, that surely influenced me back then were:

The Human League, The Art of Noise, Thomas Dolby (still at it, this year, TED | Monterey), Heaven 17, New Order and the Eurhythmics (she, too!)

What about lines? I've been thinking about them. And they're everywhere. Obviously. But what I'm curious about is the patterning of the line -- and what lies in the heart of the line. How's it made? What gesture within? And the designed line. And each of us has our own line -- drawn, made, fated,…

J. Emilio Flores for the NYTimes (Paramore, the brand, the band) The concept of 360º brand strategy isn't so unique; in fact, the concept of considering the brand as a warming touch that reaches out in every consumer-linked direction is relatively common proposition. It's a great proposal, to survey, to offer -- but the reality…
We use cookies on our website to give you the best experience on our website. By clicking “Accept”, you consent to the use of ALL the cookies.
Do not sell my personal information.
Cookie SettingsAccept
Manage consent