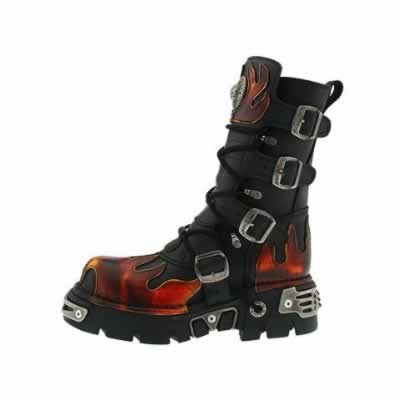 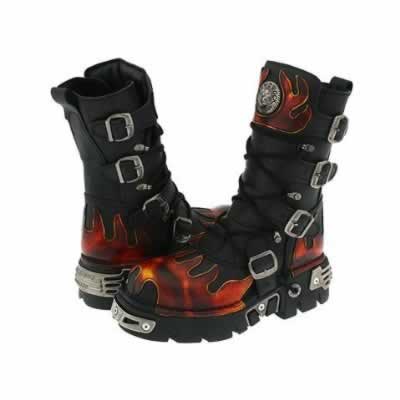 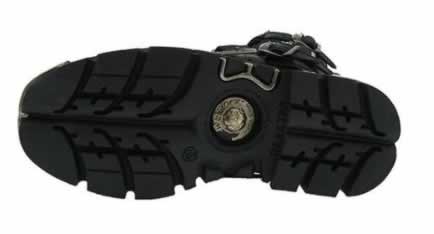 Voyages and patterns in style: Harajuku, Manga Jazz, Ivy League Preparatory — newly vitalized in the Japanese love of the brand.

When I’d travel to Japan, I’d leave on Friday, so I’d get there on Saturday, to explore the Tokyo city that night, and from the early morning on out to the evening Sunday — more wanderings. That invariably meant a run to the country — outside the city, out to the coastal city of temple shrines: Kamakura; or to the outskirts, the old temples of Nikko, or an onsen run to Hakone. Sunday could feature, as well, a run to the strange amalgam that is Harajuku, a place where there is a weird convergence between the Japanese impressions of American hipster brands, 50’s rockarolla, 40’s gangster, bobbysox, Tokyo gang, and a wild whirlwind of fashion alchemy that runs from Goth to Japanese manga cartoon dress, these are out there enough to be wholly disarming — Tokyo shock. And, of course, that conclusion is intentional. 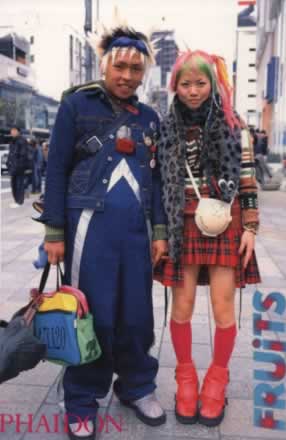 But in exploring that, and working with various brands, I found plenty of others that dug deep into the mythos of American legendary brands, intermixed with other curiosities and particularly Japanese takeaways. Alley shopping in these collectives of small shops, agglomerated in different hip districts of Tokyo, you can find the newest trends and Japanese takes on global insights. Warrens of shopping can be found in areas like Harajuku, as well as Shibuya, Omotesando and other areas. Maps have limited longevity, given the dramatic shifts in retail. And more detailed overviews can be found in specifically Japanese websites, like HarajukuStyle(.net). 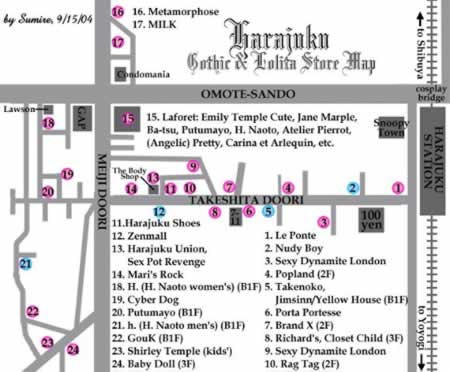 For the more classically inclined, while they embraced the spirit of Ralph Lauren and his storytelling of legacy style, they also longed for other components of American spirit. And in Harajuku, and other areas, you’d find these micro-retail shops that expressed anything from clothing emblazoned with cowboy western, Route 66 memorabilia, American fishing and outdoor brands, old working and logging attire, blue-collar gear and clothes, as well as the goth / manga / girly brands — which are, of course, more distinctively Japanese. There’s a great deal more here, to explore, at TokyoFashion.com.

In another reference, to American classic brands — and the stories that connect to them, I’d explored that idea — of legacy brands being lost, then newly rediscovered; what I might call “Built to last: Authenticity Brandstories“. Sometimes that legacy is something that is closely held, and embraced, and in other instances, it’s forgotten. And, in the trend of American movement, we tend to quickly forget, we rove, our interests shift, we abandon loyalty. Interestingly, the Japanese, in their quest for brand, do not. Their capacity to embrace brands is more customary — that is, allegiance is something that is part of traditional culture — building and deepening the cultish notion of branded, personal, and emotional alignment. And I’m not suggesting that American brands alone represent the apex of their fascination. French. British. German. Other cultures — they all are part of the curiosity of the Japanese cultural surfer. Any retail or restaurant business person knows that the bulk of American brands in Japan are franchised or licensed operations – even, for example, the hyper-preppy J.Press. They are rarely wholly American (or other culture) owned.

The Japanese brand and cultural voyagers, given the character of their explorations, dig in, examine, collect – and, in this instance, publish.

And, in a manner, the return to the concept of American classics — the heart that lies past the roots of Ralph Lauren — it might be said to find its revitalization in something that actually begins here, the 60s. 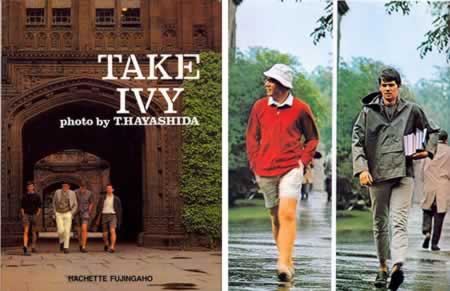 It’s curious however, that with the renewal of American classics, that the trend, for once, really didn’t originate in some new sparking of values, stories and grand old brands from American buyers. Instead, the resurgence you might consider, came from the ignition of the rediscovery of American style and preppy visioning, from Japan.

Prep is back. But really, you might actually suggest that it never left — it was, perhaps, the Japanese brand explorers that dug in, found it, documented it and built new brand propositions from those discoveries. 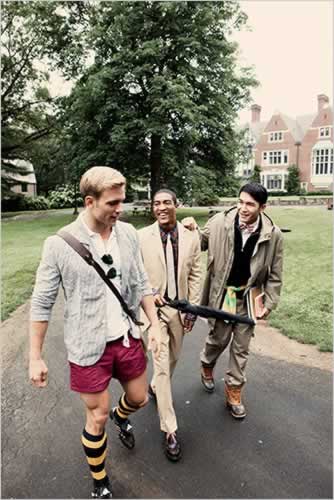 To paraphrase some commentary on various traditional clothing blogs, the NYTimes, and others that have jacked into that stream — to those in the clothes trend-space, all-American prep style has returned, for another fashionable spin around the global block. Gant is back. Madras is everything — and everywhere, button-downs flourish again. Sperry Top-Siders slide, khakis are newly back (Gap too.) And, to the earlier intonations, the recapturing of obscurity in the brand-scape of utilitarian brands, once forgotten, are coming back — Southwick and Woolrich, newly redesigned, Benjamin Bixby, the Band of Outsiders, Thom Browne — small design houses are gaining more credence; and backing up the classics trail. That newly evokes the classic characters of the William J. Mills (canvas tote satchels), Quoddy Trail Moccasins, Gitman Shirts, Alden Shoes, Gokey Boots, Filson duffel bags, Ray-Ban classic eyeware — even Brooks Brothers, Ralph Lauren, L.L.Bean duck boots, RedWing Logging boots — and returning them to invigorated play. David Colman, the New York Times fashion commentator proffers that it’s really the resurgence of a rare book”Take Ivy” and a gathering of classic clothing sites and entrepreneurs that have bolstered the action of the returning preparatory look book. A friend of mine points out that it was perhaps the Hush Puppies brand, that found renewal in Japan, and slid back to the states as well. Still, “Take Ivy” is an apex point to the sliding metrics of the prep fulcrum. 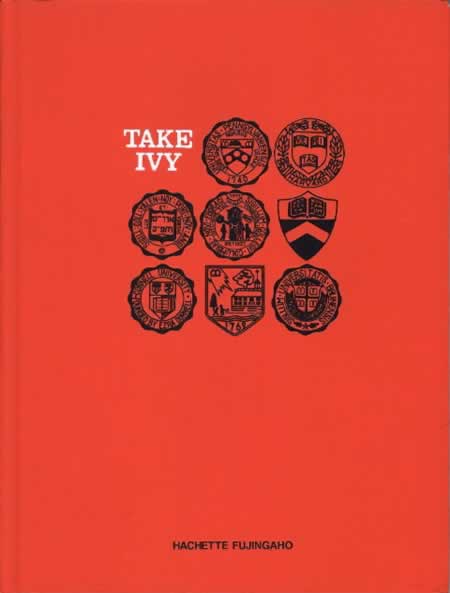 These images, all from the mid sixties, come from ACL’s(*) 1965 edition of “Take Ivy” — scanned, found, and stripped in here: 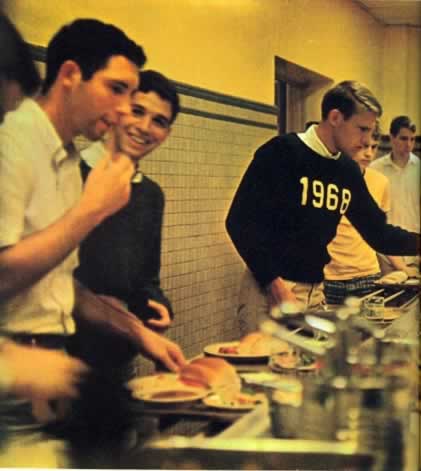 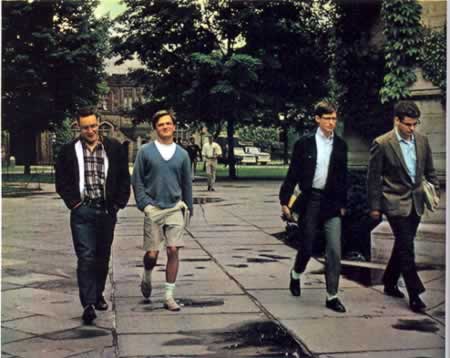 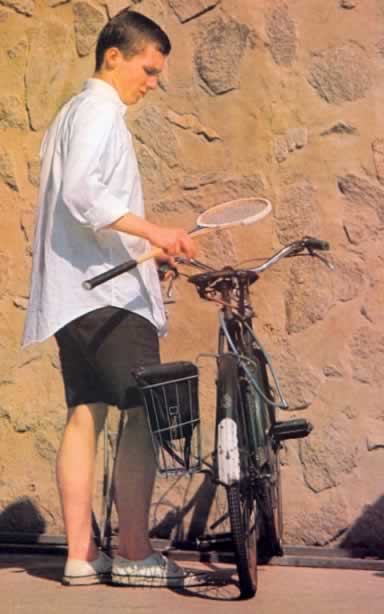 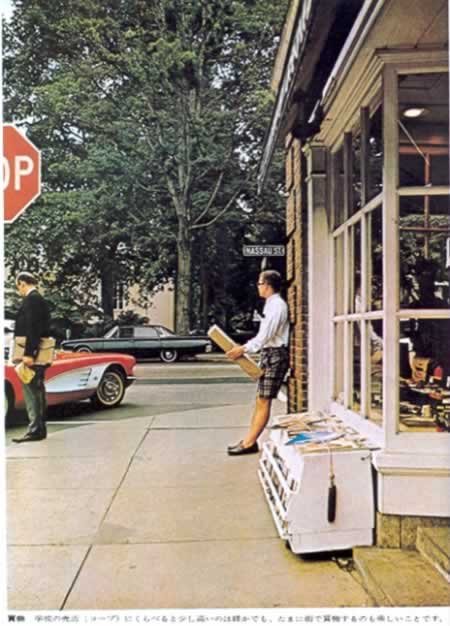 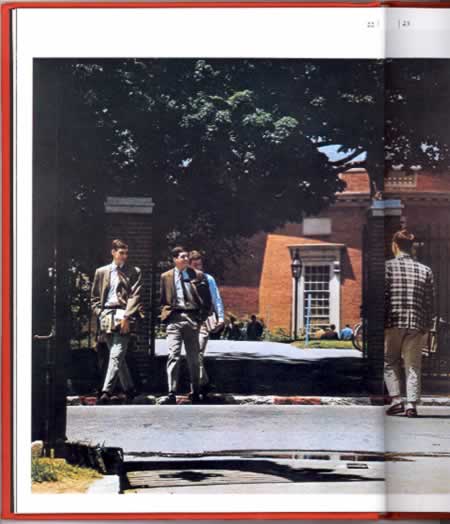 The interesting character, to development and fresh vitalization of the prep design vocabulary is that it’s not an American ignition, but instead, Japanese — addressed, studied, documented and re-booted. Working as a brand strategist, writer and designer in Japan, I can surmise the care that goes into everything there — tsutsumu: a beautifully wrapped package — is a proposition of quality that reaches outside in, and inside out.

Packaging, the concept of containment, is something with a legacy in Japan — if not decades, then centuries. The 60s exploration of prep style came from Kensuke Ishizu, founder of Van Jacket, a Japanese Ralph Lauren, the 1960s. Engineered Garments, a company that continues to work in the carefully-built “preparatory” space of channeled vintage clothing, was founded by designer Daiki Suzuki — who recalls the Van influence as a child growing up in Japan.

“It’s funny — this authentic Americana, people in the States didn’t care about it at all,” Mr. Suzuki said. “But I would take it back, and everybody would say, ‘Wow, this is really great, what is this?’ Now it’s different. People here like it now.”

He believes that this look actually catalyzed the Ivy look – as it’s defined in Japan, that became accepted in the ’70s and ’80s, sparking the craze for American gear like Red Wing Boots, L.L.Bean, Levi’s and others. And like the Japanese brand voyagers, for Isetan, DNP, Dentsu and other mega-retail / publishing / advertising scout-brand groups, in 1989, Suzuki moved to the United States, working for a large Japanese store scouting for new American designers and obscure brands to import, like White’s Boots from Washington, Russell Moccasin from Wisconsin and Duluth Pack backpacks from Minnesota. According to Suzuki’s recollections, “It’s funny — this authentic Americana, people in the States didn’t care about it at all,” Mr. Suzuki said. “But I would take it back, and everybody would say, ‘Wow, this is really great, what is this?’ Now it’s different. People here like it now.” More on his special take on the story of American authenticity — and his brand, here.

The idea of a Japanese brand, being (re)made in the states, isn’t unusual — in fact, it’s been happening for a long time. There are many brands that exist, crossing multiple categories of business that are either extant brands, simply purchased by Japanese enterprises, or old, revitalized brands that are remade — Post O’Alls. The Nippon fashion conglomerate, Kashiyama, their J.Press, a brand that has a long-running legacy in the Northeast, has only four stores in the states — selling six times the merchandise in Japan in retail outlets there.

That classic American look is something that the Japanese might do better than the Americans, according to designers Thom Browne and Scott Sternberg, the Band of Outsiders, channeling authentic Americana, and selling well in Japan.

There’s a flipped positioning — one, the Japanese perspective on truly classic prep — the Ivy look; and in turn, the inverse — an American seeing a truly prepped-out Japanese stylist. Who owns what?

Mr. Suzuki remembers the first time he met Mr. Browne, when they were both starting their brand development and product lines. “He was wearing a gray suit, button-down shirt, tie, cashmere cardigan and wingtips,” he recalled. “I remember thinking, ‘I’ve never seen an American dress in such Japanese style.’” Mr. Browne is flattered. “It’s amazing,” he said. “The Japanese get the whole perfect American thing better than Americans. They understand that it’s an identifiable style around the world, this American look. We think we appreciate it, but we really don’t, not like they do.” (NYTimes)

This transitioning sense is nothing new — but fascinating nonetheless — bettering the holy tartan has an august history. According to Colman, “Brooks Brothers, the country’s oldest operating men’s clothier, and the venerable Ray-Ban brand are owned by the Italian Del Vecchio family. Erich Segal, the author of “Love Story,” and Lisa Birnbach, who put together “The Official Preppy Handbook,” are Jewish, as is Scott Sternberg of Band of Outsiders and, of course, the look’s most famous exponent, Ralph Lauren.”

And, by the way, those two most prep fabrics, gingham and seersucker, came to the United States, via Britain, from India.

Indeed, the story line spreads from the seen roots, perhaps hundreds of years back, originating as bespoke in London, threaded through Paris, the tailoring of Italy, the concept of the “uniform” — who knows, where — and where from? But in a manner, the form of dress, the very telling of fashion is an infusion that is layered in story on story on story — that relationship of the brand, the human, the story.

Exploring Quincy Jones, a vision of newly branding and defining the storytelling of music, culture, trend and coolness: Vibe Magazine Quincy Jones, who just happens to be from Seattle, one of the places that I live and love in, created about a decade and a half back, the concept of a newly wrapped vision of…

Rock my world, make me different, knock me out, make me beautiful -- take me someplace else. Creating strategic campaign positioning signatures: premise, promise, expectations and outcomes. There is a presumption that everything is greener, someplace other than where you are. And once you get over there, the same holds true -- it's better elsewhere.…