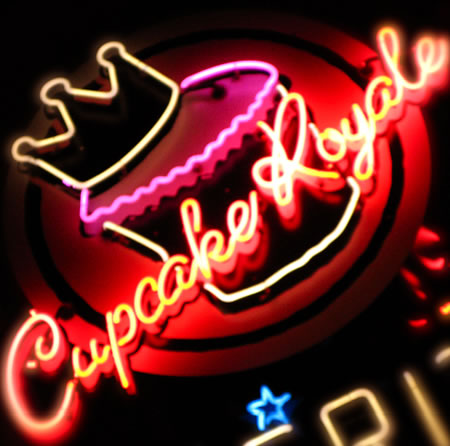 The pursuit of comfort: contentment during uncomfortable times

Working on the brand revolution of Cinnabon, our research focused on finding what was missing, in the heart of the brand, retail experience and relationship management. Actually, there wasn’t any. There was no real strategy of relationship; there was no thinking about the right way to stay connected to customers. It had been, to all intensive purposes, forgotten. We were asked to explore that — “really, what’s the story, and who embraces it?” How could that be told?

Told? Listening. I don’t think it’s ever about any more, or anything less than that. What are you hearing, seeing, experiencing, sensing — in the construct of relationships — the community that is connected to you, your brand? What is the story that you’re telling? And — to the simplicity of that experience — who cares?

The point of the work, ultimately, was about building a story that was founded on the psychic character of the Cinnabon experience. What did people say, in the interceptions of visitors, relationships that would speak? “We are here for our own sense of comfort, but as well, because we feel like we deserve it.” The idea of listening was also to the nature of building a story that resonantly related to the premise — and the promise — of the telling. Something authentic. Something true. The scent of cinnamon — baked — wafting as a scent, that reminds of home, the hearth, the experience of being gathered around the scented baking place, the center of the home — at least in the spirit of memory spoken — where we might all recall it. Any brand, truly, will be about its ability to captivate and gather attention. Attention is attunement — who links in? Tunes in? Is tuned to that vibration? Brand vibe — that’s the heart of the link, either the vibration is happily tuned, or it’s a remote cacophony; right there, it’s either winning or empty-handed.

Martin Lindstrom, in a recent (e)blast, has a theory about guilt — that the new “shopping” spree is about an underlayment of subtle guilt. With the incessant battering about the economy — and the difficulties that every single of us have faced — the concept of a guilt-based buying splurge is rather strange; I mean really — these days? Guilt = buying? I’m not seeing that idea — and there’s not much telling on the retail front suggesting that buying is showing up as a guilt-riding phenomena.

Speaking of the guilt-ridden, what of the emergence of cupcakes? What is that? According to a friend, the concept is about the current “have your cake and eat it too”, that is: have your cake and eat it alone — it’s all yours! And during this time of “lesser”, it’s time for each of us to have our own: cupcake. And, in heading to a place in West Seattle, Cupcake Royale, that’s what they are — little cakes, just for you. I’d not put that idea together: cup+cake. And perhaps she’s right – small cakes, just for you. We split one, instead.

According to the gathering media, the proposition of creating entrepreneurial fantasies in selling cupcakes is taking the nation by swirling sugared storm. There are no CC Manufacturing Associations, but the storied evidences suggest that cupcake emporia and bakeries are popping up all over the place. NYC and LA are the meccas of sweetened, topped caked baking but it’s coming along elsewhere. Mintel, the research group, suggests a projected rise of 20 percent over the next five years, while conventional baking growth will be single digit.

The Food Network offers “Cupcake Wars,” a series pilot in which four bakers vie to create the most interesting concoctions. The most popular of the cupcake blogs, Cupcakestakethecake, is visited by some 9,000 people a day. Books surge in the tide: “Martha Stewart’s Cupcakes” (Clarkson, Potter), a collection of 175 recipes, was published in June, and spent 11 weeks on The New York Times best-seller list.

And venture capitalists invest, according to the New York Times, “Cupcake stores are taking the place of ice cream stores,” said Adam Borden, whose Baltimore-based venture capital firm, Bradmer Foods, specializes in food-focused enterprises. “Cupcakes aren’t seasonal like ice cream, and they appeal to people who want the authentic experience. They have an allure based on nostalgia.” They further propose that there are models that suggest the basic prototypes of retailing, cupcake-merchandising. They are grouped in these four positions of cupcake-brand commerce.

• The focused proposition — cupcakes only bakery.
• The cupcakes and other stuff store — selling more than just cupcakes.
• The online cupcake merchandising shop — selling only Web-based selling.
• The cupcake-chain retail bakery — more than one. 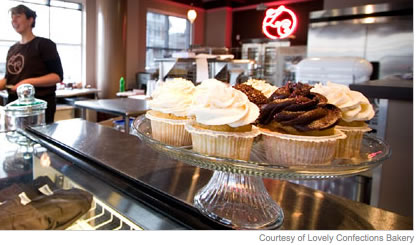 The real conception might align with the opening sentiment in exploration, at the beginning of this sweetened study — that the idea of small cupped cakes is a throwback to another time, another happier memory — and a sense of personal indulgences, that are deserved, simpler and easier.

Baking is an ancient art. 4,000 years ago, the ritual of baking was tied to the symbolism of the hearth, the “one in the oven” concept, the place of love, warmth and birth; hearth and mother. And perhaps that’s part of the proposition, that the notion of baked love, found in the swirled and sugared mix of the miniature cake, symbolizes something bigger and different — we all go back, thousands of years: Babylon. The link, even to the trace of the pornographic, found here: early 13th century, from Old French fornais, from, extending back in time: Latin fornacem (nominative, the fornicator: fornax) “an oven, kiln,” related to fornus, furnus “oven,” and to formus “warm,” from PIE base *ghworm– “warm” (cf. Greek thermos, O.E. wearm; see warm). And warmth, that word goes back even further, think of the world, some thousand years before the advance of the “Common Era.”

Engaging leadership brand champions: studying the patterning of innovation, the struggle of the paradigm and the modeling of breaking brands free. As a business person, a planner, and a student of enterprise internationally, working on the edge of innovation, I've been -- we've been -- exposed to some extraordinary people, ideas, teams and concepts. That…

The spirit of the handmade: holistic brands, built by hand

Examining the principle of integrated marketing, experience design, and the semblance of the sentient. I'd start with this poetic assemblage. Memories reach back. They are the string from the now, to the then. They link where we are, what we are, to what we've been, and where we've been -- and how all of these…
We use cookies on our website to give you the best experience on our website. By clicking “Accept”, you consent to the use of ALL the cookies.
Do not sell my personal information.
Cookie SettingsAccept
Manage consent