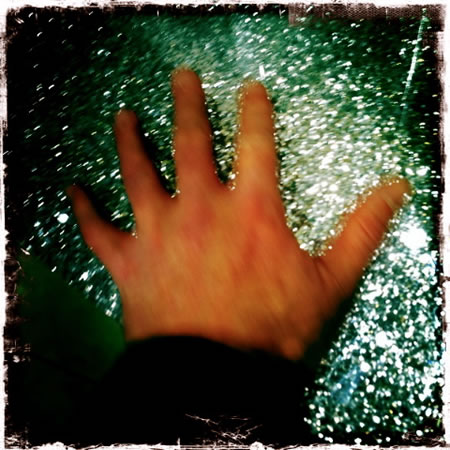 In working through a series of materials for a new retail concept, it was interesting to see the preponderance of materials that lusted after the slickest vocabulary of finish. Easy to clean. But, to the nature of soul in (brand) experience, even the most technical brands might have the capacity to share new dimensions of touch. 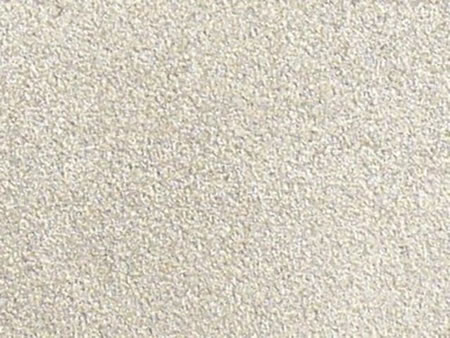 A compositing, for example, between the notion of texture and high tech touch could be blasted or bead spattered aluminum. Earlier, we built materials that utilized beaded aluminum, in which the aluminum substrate is literally “sprayed” with aluminum — bead blasting, an alternate impression of texturing, marking in. Pebbling, buffing, intentional scratching and marring and other forms add something to the measure of sensate connection.

This slight texturing says something about the idea of touch experience — it’s less to the tradition of the legacy of perfected materials, but more to materials that show some touch of the hand, of age, of human experience.

One, the presumption of the shine might be to the future, the protection against the aged. Then, the other would be that in that shine, the time stops, and it’s merely a reflection of the present.

Walking the old ways, the ideas of aging and transitioning, the old spaces, markets, temples, shop fronts, places, worn and wearing — these are beautiful things. Places — that are unforgettable. Time shreds the polish of everything. Texture resolves, and evolves — touch emerges.

There is a touch of the unnatural, to the perfectly smooth, except in the hardened skins of beetles — but even here, there is depth of touch. Polished stone, riverworn, watersmoothed — have touch. Granularity — the molecular kerning reveals a layering of contact, on contact, on touch, on revealing.

Better left unpolished, and the time shall show its truth. Maintenance, dissolved.

In following the collective efforts of Blaine Brownell’s Transmaterial examinations, there are dozens of newly invented as well as older matierals that have some implication of textured quality. Concrete, for one. Old, but new — if treated with some respectful strategy. And in the realm of the green, the idea of less than perfect applications still supports the utilization of uniquely disposed patterns and sensations.

I think about materials, as well, that might come from nature, yet distinctly manufactured. Blaine notes, for example: 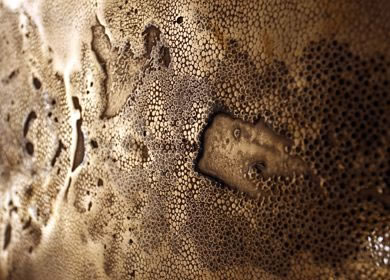 Based Upon has developed a series of multi-layered textured surfaces in metals, resins, and lacquers that are available to be specified as surface finishes within architectural and interiors projects. Taking inspiration from elements as diverse as stingray skin, laburnum leaves, or the fine lines within a human hand, Based Upon has conjured a rich and varied collection of surface features using construction-ready materials. 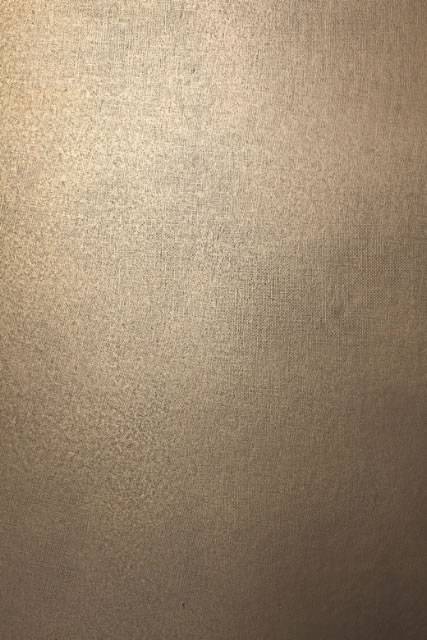 Based Upon Surfaces may be hung like wall paintings, although they are often used to create detailed feature walls or monolithic furniture pieces. The surfaces also make visually-stimulating ceilings or hardwearing metal floors that subtly evolve over time.
Working the metal from a liquid to a solid state, Based Upon plays with the changing state of the material, and experiments with the way the liquid metal dries, drips or settles upon a surface. The finishing process is careful, considered, and intricate. Sanding and polishing excavates the metal from beneath the earth-like surface that forms, allowing the application of traditional metal techniques.

Study, for reference, the idea of the tagging that Blaine attributes, noted above. These lend themselves to other relevant applications — biomimetic surfaces and multidimensionality, for example.

This all began in a chat with Seattle | GIRVIN Creative Director, Chie Masuyama. We were talking about plates — and her idea about a kind of textured, roughly-hewn form of service ware. But wear, might be more like it. And I was struck by the idea of thinking of brand applications — even identity — in the context of a more textured and enriched surface in design.

That took me back to working in Japan, studying Zen influenced art and architecture and considering the reflection of wabi-sabi. I’ve noted this in the past, but there are salient relevancies here.

There are characters in Japanese aesthetics that most people know to the concept of objects that are beautifully aged, the character implicit in use, authentic decay, honored “wearing out”, rustic simplicity and things that are made better, richer, and filled with more character as they “wrinkle” in their time.

The point, to applications, relates to the spirit of how the brand is experienced, what’s the story, who’s telling it, who’s listening – and finally, who cares? People are not inherently focused on the details of how a counter is perceived, or a floor, wall treatments — or brand products — unless they are intentioned to experience and sense these things. These are attributes of experience: the patterning of a brand. They as real or as relevant as a sheet of stainless steel. Or, to the contrary, the beauty of cor-ten — materials that naturally descend to new characters in the evolution of time.

Touch, is big according to PsyBlog — in any capacity of human connectedness. Touch a human, appropriately, and connectedness appear:

1. The monied touch
A well-timed touch can encourage other people to return a lost item. In one experiment, users of a phone booth who were touched were more likely to return a lost dime to an experimenter (Kleinke, 1977). The action was no more than a light touch on the arm.

People will do more than that though; people will give a bigger tip to a waitress who has touched them (Crusco & Wetzel, 1984).

2. Reaching for help, in touch
People are also more likely to provide help when touched. In one study, strangers who were touched lightly on the arm were more likely to help an experimenter pick up things they had dropped (Gueguen, 2003). The percentage of people who helped went up from 63% to 90%.

3. The compliant touch
The power of a light touch on the upper arm often extends more broadly to compliance.

In a study by Willis and Hamm (1980), participants were asked to sign a petition. While 55% of those not touched agreed to sign it, this went up to 81% of those participants touched once on the upper arm. A second study asked people to fill in a questionnaire. The same touch increased compliance from 40% to 70%.

4. Touching twice
And you can increase compliance with a second light touch on the arm.

5. The risk of touch
However, the acceptability of touch, especially between men, depends a lot on culture.

When Dolinski (2010) carried out a compliance experiment in Poland, he got quite different results for men and women. In Poland men asked to do the experimenter a favour reacted badly to a light touch on the arm. This seemed to be related to higher levels of homophobia. Women, however, still reacted positively to touch.

6. The sales touch
Unlike Poland, France has a contact culture and touching is acceptable between two men. So French researchers Erceau and Gueguen (2007) approached random men at a second-hand car market. Half were touched lightly on the arm for 1 second, the other half weren’t.

Afterwards those who had been touched rated the seller as more sincere, friendly, honest, agreeable and kind. Not bad for a 1-second touch. We can safely assume the results would have been quite different in Poland!

7. Touching commitment
You won’t be surprised to hear that men show more interest in a woman who has lightly touched them. But here’s the research anyway: Gueguen (2010) found men easily misinterpreted a light nonsexual touch on the arm as a show of sexual interest.

Perhaps more surprisingly women also responded well to a light touch on the arm when being asked for their phone number by a man in the street (Gueguen, 2007). This may be because women associated a light 1 or 2-second touch with greater dominance. (Bear in mind, though, that this research was in France again!)

8. Positioning touch
Touch communicates something vital about power relationships. Henley (1973) observed people in a major city as they went about their daily business. The people who tended to touch others (versus those being touched) were usually higher status. Generally we regard people who touch others as having more power in society (Summerhayes & Suchner, 1978).

9. Touching communication
Touch comes in many different forms and can communicate a variety of different emotions. Just how much can be communicated through touch alone is demonstrated by one remarkable study by Hertenstein et al. (2006).

Using only a touch on the forearm, participants in this study tried to communicate 12 separate emotions to another person. The receiver, despite not being able to see the toucher, or the touch itself, were pretty accurate for anger, fear, disgust, love, gratitude and sympathy. Accuracy ranged from 48% to 83%.

To put it in context, that is as good as we can do when we can see someone’s face.

10. Touching intelligence
So, if you can do all that with a touch, imagine what you could do with a massage!

Well, one study has found that it can boost your maths skills (Field, 1996). Compared with a control group, participants who received massages twice a week for 5 weeks were not only more relaxed but also did better on a maths test. Once again, witness the incredible power of touch.

The layering of touching experience — from the sensitivity to the beauty of the object, the use of sensately compelling materials, to the touching connectivity of brands, and touching, in communication: human to human.

Seeking the fiery passion of inspiration: Tom Peters, August 31, 1997 I met Tom Peters, just moments after his (as usual) carefully integrated marketing of "the brand called you" positioning. As ever, he knows how to get the work / word / world out there quickly and effectively. Talking to him about it, I'd thought…

InfoGraphical | the acceleration of content and search: redirecting in-formation to speedy visualizations

Pathfinder, the centerpoint of knowledge: Labyrinth do Outeiro do Cribo, Galicia "Sometime, looking for something, somewhere -- someday -- somebody might be found." If you're hungry, how do you understand the nature of food (information) and find the right path to more speedily grasp the journey? recipe (Latin: take this) We're all hungry, looking for…
We use cookies on our website to give you the best experience on our website. By clicking “Accept”, you consent to the use of ALL the cookies.
Do not sell my personal information.
Cookie SettingsAccept
Manage consent