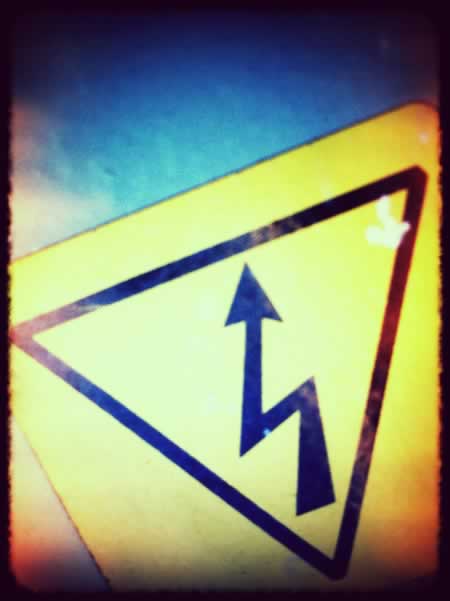 Exploring the emotionality of strategy, the humanity of brand, untethered creativity and the tactics of design management.

We’ve got history in the balance between the concept of the crossroads of creativity and intelligence, as well as in the realm of design management and thinking implications for how to align intelligence with design execution. That comes from a close partnering with Procter & Gamble, as well as IBM, Apple, Kimberly-Clark, Kraft, IDEO and other large brand(ing) groups that have been, over time, collectively linked to the idea of aligning a strong strategic intention to the process of engaging the premise, and actualizing the promise.

Exploring out there, you’ll find there is a theoretical planning module, whose proposition is a grouping of action sets, linking context, framing challenges, collaborative investigation, extrapolation of postulates to creating better futures—articulated in this wiki overview—there are layers of this concatenation and ways in which practitioners carry away their storytelling, creative narratives that relate to the nature of designing | thinking | brand | outcomes.

Explore elsewhere—this movement that might be aligned to this selfsame premise links to design management, which presumes that design and the creative process, related to brand, can be a intellectually explicated, process-managed examination. Designing with intentional comprehension builds on strategy—that works integratively across all disciplines of creativity [mostly in the construct of holistic brand experiences and enterprise production] and wins in the end, with the goals of boosting business. Great design = great business.

It’s been pointed out by numerous writers whose positioning lends not only value to the thinking addition to the power of design, but as well — winning solutions that enterprises can see results.

A nomenclature and tactical conflict exists. Solutions in reinvention have been propounded. We were there already in the last decade.

According to Wikipedia‘s reference, a quick history [bibliodata below:]
“design activity of the 20th century (and earlier) can be considered “design thinking,” the term first emerged prominently in the 1980s with the emergence of human-centered design. The notion of design as a “way of thinking” can be traced in the sciences to Herbert Simon’s 1969 book “The Sciences of the Artificial,”[1] and more specifically in design engineering to Robert McKim’s 1973 book “Experiences in Visual Thinking”[2]. Rolf Faste expanded McKim’s work in the 80s and 90s in his teaching at Stanford,[3][4] defining and popularizing the idea of “design thinking”[5] as a way of creative action that was adapted for business purposes by IDEO through his colleague David M. Kelley[6]. Peter Rowe’s 1987 book Design Thinking was the first noteworthy usage of the term in the literature on design,[7] providing a systematic account of problem solving procedures used by architects and urban planners. The 1992 article by Richard Buchanan titled “Wicked Problems in Design Thinking”[8] expressed a broader view of design thinking that has been highly influential with regard to addressing intractable human concerns through design. Today there is considerable academic and business interest in understanding design thinking and design cognition, including an ongoing series of symposia on research in design thinking.[9]

We did that in Vancouver, Granville Island, BC. A team of presenters, including GIRVIN, came in from all over the world to offer 5 minute overviews of our thinking. Our path, in a manner, studied the ideas of how we, as a team, consider design + thinking, (and thinking design) and the link to the other dimensions of human touch.

WHEN WE’RE WORKSHOPPING—WHEN WE BUILD TOOLS TO EXPLORE —WE BREAK DOWN THE THINKING TO OPEN UP THE CHANNELS OF LEARNING.

In studying the cartography of design thinking, processes, oftentimes, this mapping is so heavily formed on the procession and sequence of planning, that we ponder the meander of human interface.

We need a plan that can be unplanned.

That idea of plan, the engineering of the detail of structure is wholly necessary, but the nature of the journey– from powerpoint to pdf sequences: let’s loosen up: find a more human touch in how this UX of design thinking can be explained.

A colleague and copresenter, Volker Mueller, a strategist (architect-trained) and design thinking engineer at Bentley offered his overview of the complexity of the process that he uses in building solutions for his executive and sales team in empowering tools and approaches. And while his presentation was founded in powerpoint, he attempted to map in the coordinates of humans—their interplay—in the design development and thinking process.

Still, to Girvin’s presentation—albeit 5 minutes of evangelism—reached to the strategy of design, soul-fullness, the humanity of brand + design dimension, and the layering of depth in the meditation on design thinking.

As with anything, we reach deep.

To the strategy of design, thinking, and unfoldment in the presence of an audience, guest, customer, client, the bridge from the making to the consumer, there are psychic dimensions, as well. Psyche, that which lies beneath and within—is not only the consumer experiencer, but in the founding of the brand as well.

To un-think suggests a movement to that which is not thought, but felt. The catalyst of cascading change, not everything can be processed, planned or programmed.
Some must be found, sensed and felt.

The instinct of sensation and reaction—the feeling of the crowd, the maker, and the thread between them. 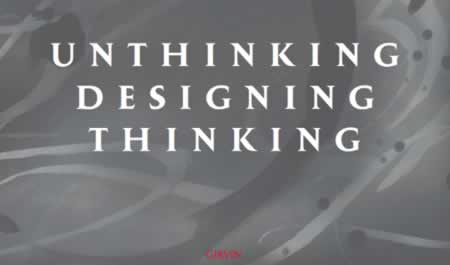 To think, an ancient word, is about the magic of appearance; it, to making something appear, to cause its revelation—it’s lilting, flowing, moving: like a ghost or spirit; and it can vanish in the instant of its manufacture. Thought comes, and goes—it might be in the transcription, the translation, the sketching, the ideation in evolution that brings it sequentially to a made form, from the opening “spirit” of its foundation. To “consider”—from the Latin, con-sidere, and the sidereal, reaches outwards to the stars.

Think > translate > illustrate > formalize > consider > progress > to the farther shore in that story. 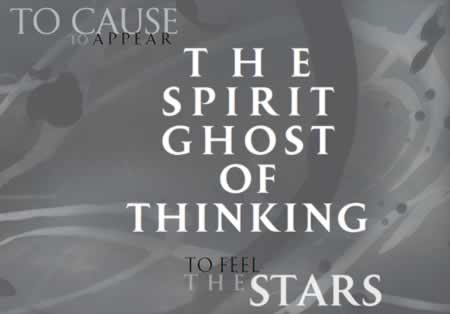 Reach is that stretch — out, reeling in, the gathering. In reaching out, you can reach back — but the reach, in creative, is spatially dimensionless.

But in any reach, naming this, there is always the link to mind, the memory and meaning.

This design, thought, means what to whom? 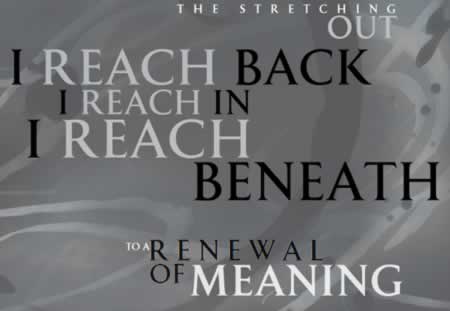 You can’t depersonalize the nature of design in the reflection of design—the signing, is the signature. That lends to a human, that lends to a making—those perspectives, the circling and angling of seeing, and seeing in=insight.

Go back, reach in.

Where does it come from, this idea?
And there is craft in that making — craft known in the original sensing of the word: the Old English (450-1100 C.E)—cræft, a phrasing of “power, physical strength, might,” and backwards in time from the Proto Germanic *krab-/*kraf- (and the Old Frisian kreft, Old High German chraft, German Kraft for “strength, skill;” the Old Norse kraptr “strength, virtue.”)

And expanded, in sense, in Old English to mean “skill, art, science, talent” (via a notion of “mental power” and later interpreted to the notation of “trade, handicraft, calling.” The word still was used for “might, power” in 12th century Middle English. 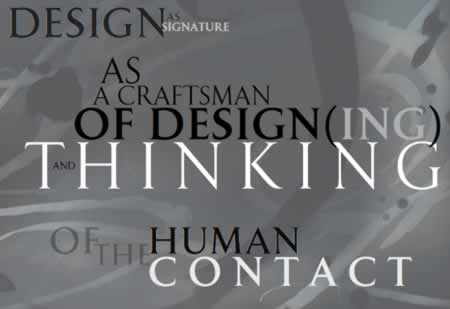 When you are in an astonishing place—you are moving there, moving in, moving through. And there might be thinking in that character, but there too, the exhalation of making—design thinking > thinking design.

And as we’re thinking design—we’re thinking about the design of a journey, which could be the collaborative pathway of a team of brand explorers, looking into the depths of who they are, what they stand for, and how it should be told, expressed—and designed. 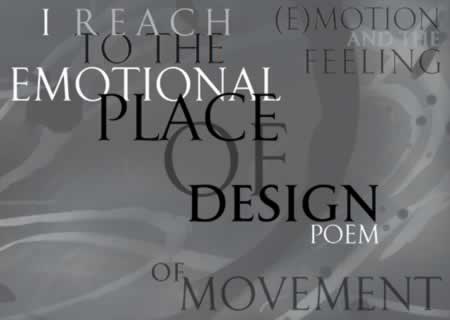 In the beauty of the signature, the poetic stretch of reaching across the planning matrix to the deeper set—the depth of mind:
allegory | finding the layers of what lies in an image, found in the image of another.
archetype | finding arkhetypon — patterning, modeling, the design of a seal –the first type.
metaphor | finding metaphora — one word, one language, becomes another. 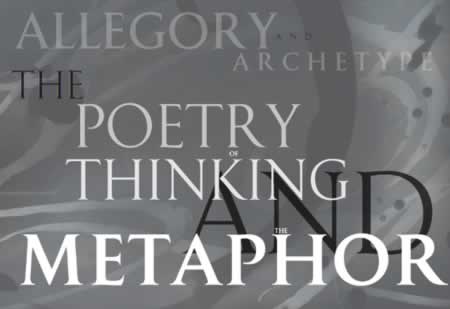 To the thinking of design, passion drives—and brand, to the ancient root and sound, is — and begets — fire.

Passion is the pain of holistic commitment — “fail early. And often.” And story is history — reaching back into the memory of touched, scented, heard, tasted, seen. But there’s more.

Focus in: to it.
The focus, from the Latin: “the hearth and fireplace.”

Without fire, it all goes out. 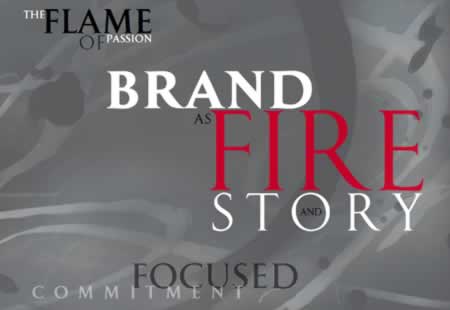 To be a design thinker, there has to be feeling — be, in. Being. And being in the paces of places that can be designed — but they can be felt, moving beyond just “space” to place.
Sense, in sentience, feeling wholly touched. 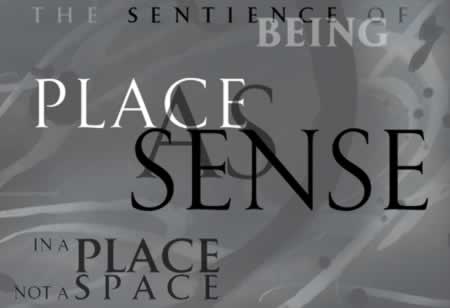 Ideas are woven in the crowd — and being a weaver | craftsman, I know the tossing slide of the idea that rips back and forth across the shuttling of gathered ideals.

Sutra — that is the weaving; and the red thread is the breath of inspiration that keeps moving through the presence of that thoughtful designed intention — the warp, the weft, the woof of visualized processions. The procession — it’s how you walk into something. How much space, how much place do you have? 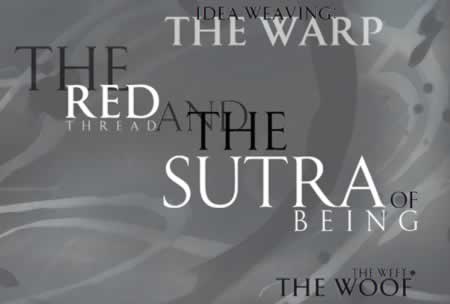 Tantra is the threading — allegorically, but it too relates to the loom of experience; think of the tapestry of mind fullness; it’s never flat, it is a vast matrix of fabulous interconnectivity; it is the weaving the creates the beauty of the flat work of the layered art. 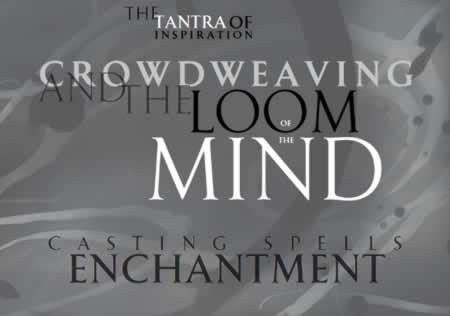 Thinking design will be finding what lies beneath, scene above, known below—the psychic, the personal, the physical, the sensate—and the marvelment of how they come together. The text—the context—the messaging and the layering of
that translation: image. 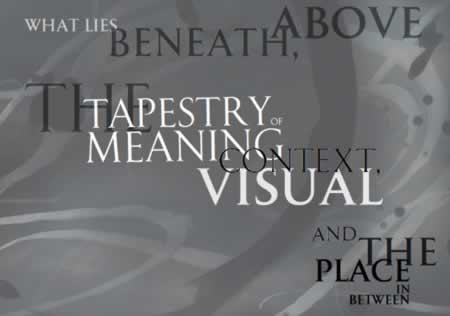 Sensing is sphere—the experiencer—coming to the range of eight sensate conditions, that bind the five known arrangements together. That would be the sensation of instinct—the unknown reaction that stimulates choice; that would be memory—coming from one to another: memory is meaning. To mean, to intend, to recall and gather; and in that — the sense of balance.

It’s how it holds together. All.

Designing thinking, thinking design, is the wholeness of process(ion)—and what, in that holistic quest(ion) leads approach and pathway. 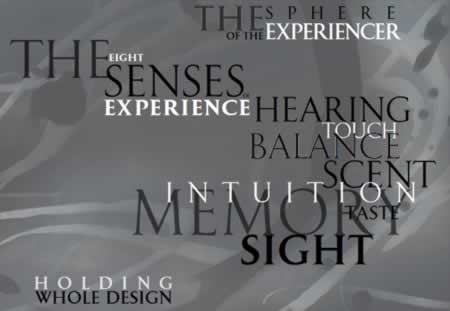 Notes and references (Wikipedia)
^ Simon, Herbert (1969). The Sciences of the Artificial. Cambridge: MIT Press.
^ a b McKim, Robert (1973). Experiences in Visual Thinking. Brooks/Cole Publishing Co.
^ Faste, Rolf, Bernard Roth and Douglass J. Wilde, “Integrating Creativity into the Mechanical Engineering Curriculum”, Cary A. Fisher, Ed., ASME Resource Guide to Innovation in Engineering Design, American Society of Mechanical Engineers, New York, 1993
^ a b c Faste, Rolf, “Ambidextrous Thinking”, Innovations in Mechanical Engineering Curricula for the 1990s, American Society of Mechanical Engineers, November 1994
^ Patnaik, Dev, “Forget Design Thinking and Try Hybrid Thinking“, Fast Company, August 25, 2009. “…design thinking is any process that applies the methods of industrial designers to problems beyond how a product should look. My mentor at Stanford, Rolf Faste, did more than anyone to define the term and express the unique role that designers could play in making pretty much everything.”
^ Brown, Tim. “The Making of a Design Thinker.” Metropolis Oct. 2009: 60-62. Pg60: “David Kelley… said that every time someone came to ask him about design, he found himself inserting the word thinking to explain what it is that designers do. The term design thinking stuck.”
^ a b c Rowe, G. Peter (1987). Design Thinking. Cambridge: The MIT Press. ISBN 978-0262680677.
^ a b Buchanan, Richard, “Wicked Problems in Design Thinking,” Design Issues, vol. 8, no. 2, Spring 1992.
^ “Design Thinking Research Symposia“. Open University. Retrieved 2008-02-18.

This month’s design comes from our senior designer MacKenzie Mason. Having been a part of the GIRVIN team for almost two years, MacKenzie is known for her exceptional illustration work, packaging design, and incredible eye for detail. Those who work with her witness first-hand her passion for hand-craft and love seeing it incorporated into her…

BRAND EMOTIONALISM V | SOUL BRANDS: The Quest For Heart And Holistic Experience In the deepest heart of brands: what lies within? Part V Brand and soul, some offer a key question: “what the..?” Finding the soul of the brand is something that many might immediately chafe against, or laugh out loud—the sheer presumption: brand=soul.…