Branding and the humanitarian agenda 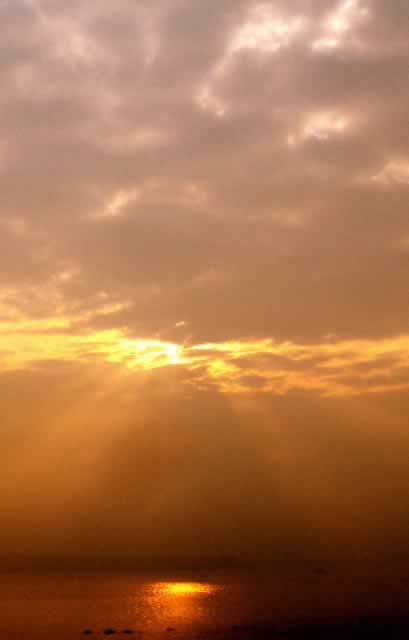 There is something to the travails of the human condition in communicating the benefits of solutions that many organizations attempt to express, in terms of the uplift that they offer. There is a challenge in balancing the sense of implied need, in urgency, and telling the story true. But it’s equally intriguing how few organizations communicate effectively the nature of their solutions, the benefits that are provided, and the emotional framing of their messaging. Too often, they are lost in the wash of messages that seem familiar, bleak, and oftentimes undifferentiated. There are so many challenges on the planet in terms of the manifestation of the stories of profound need, yet the ineffectiveness of how the stories are transposed in a manner that would provide a sense of the benefit of contributing.

We would propose that the message needs to be geared to the expressions of the profundity of solutions, and less to the ever diminishing impression of the black tide of failure.

In speaking with Joe Cerrell, we explored that idea — how to tell stories that react to need, yet import an implication of differentiated uplift to the audience that would add to the gift of supporting the organization. It has to do with first understanding the nature of the story.

These might be spelled out in the following manner, in the construct of the narrative gathering. That is, people’s minds and memories are linked inherently to understanding their own lives in the genetics of story telling — they frame their experiences based on these strings of stories — not facts, but legends in living. Even the social media of Facebook and Twitter are essentially, sequences of experiential stories, one to more complex circumspection about what’s happening now, concomitant with interactive media expressions. 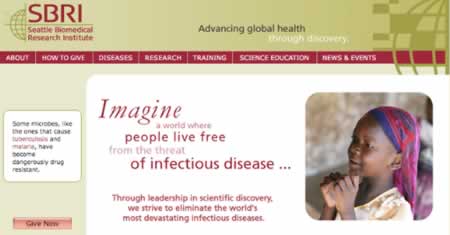 In our work for SBRI, there’s a reach to uplift, there’s an implied sense of urgency, yet there is an optimistic tint that prevails — actions in constructive movement and the provisions of solutions. There are stories being told, supplanting travail with meaningful outcomes. The important key here is the direct link to messaging that can be experienced — and held by the visitor — at the outcome. And that the layering is perceivable as a series of scannable messages.

Any organization needs to focus on the story — the personal story — as a bridge to linking personal connections to renewed outlook and connection with the person — their lives, and the impact of the life on the outside with the life on the inside. In a way, we’ve referred to this as reflectivity, brand reflection.

What is given, emotionally, in memory connection, is held and embraced and returned?

The concept of the challenges of expressing story, relations — in outreach — to marketed, fund-raising audiences is noted in a message that both Joe and I’d read, which offers the same perspective to the notion of ineffectiveness.

Nicholas D. Kristof, Op-Ed columnist for the NYTimes references that idea that many of us are capable are being responsive to the solo support of one person in need, because we can relate to the problem. As he notes, “There’s growing evidence that jumping up and down about millions of lives at stake can even be counterproductive. A number of studies have found that we are much more willing to donate to one needy person than to several. In one experiment, researchers solicited donations for a $300,000 fund that in one version would save the life of one child, and in another the lives of eight children. People contributed more when the fund would save only one life.”

According to psychology professor, Paul Slovic, at the University of Oregon, it’s harder for us, as a caring people, to focus on millions of people lost to various struggles, as opposed to merely the more comprehensible sense of one person. He’s even authored a paper to that effect, “The more who die, the less we care.” One death, known, is a tragedy, a million people, less comprehensible. From our take, that difficulty relates to the psychology of reference — what can be emotionally embraced: the idea that connecting with one person, one child — or perhaps even a village — is far more “solvable” than the indiscriminately perceived mass of millions. The feel good component of offering some support vanishes — from the actualized offering to one, than to the offering to a populace of hundreds of thousands.

“The Life You Can Save“, authored by Professor Peter Singer, Princeton University, offers the allegory that while we might be willing to save someone — who’s right in front of us — but are, perhaps, unwilling to make contributions to save others dying of tuberculosis on the other side of the world.

In exploring others, I note the concept of presence and absence of story, personal connectivity — an index of relevance, and the ability to sense that the contribution is going somewhere meaningful:

Heifer. Girvin created the graphic identity for Heifer, and some of the opening efforts in branding — and created their current corporate signature messaging. However, those openings aren’t enough. They need to deepen the track. And more work needs to be done. Even the base site application fails to offer a positioning that lends itself to an emotional reach — the track between conception and path to solution is weak. There aren’t enough levels of messaging to allow for a scan of the concept. moreover, to the Foundation, the strangely dark palette doesn’t proffer the sense of warmth that is needed to bridge to person — and the personality of the (humanitarian) brand.

UJA Federation|NYC. While we consulted in the past with UJA, both in NYC and Seattle, as well as supporting other communities in brand strategy and design, not much of the original character of the work is in play, aside from fundamental typographic systems. Here too, the nature of the reach is less than compelling, though the “action” links offer the intimation of what you can do by connecting with the organization. More soul, please. 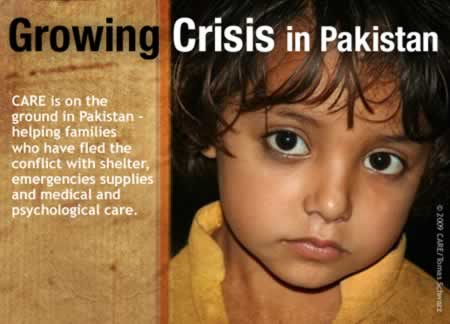 Care. The compelling positioning, “I am powerful”, isn’t connective. Why is this person powerful — because they, you, can help? There’s a challenge in completing the circle, building out that premise — to the promise — of what might happen in embracing the relationship. 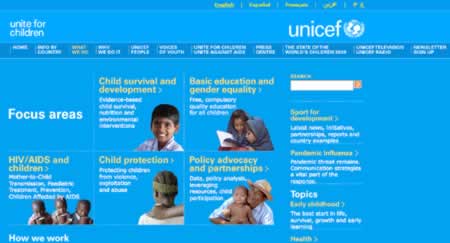 Girvin has a connection with Unicef as well, that’s two-fold. Both are profoundly personal. My brother and I both worked together on the IDD | 2000 program for Unicef as well as the Chinese Ministry of Health. Unicef’s missions are complex, and it’s all more of a challenge to manage messaging. Having worked internally at Unicef, I learned more of that complexity — working on videos and the implication of storytelling in that media. 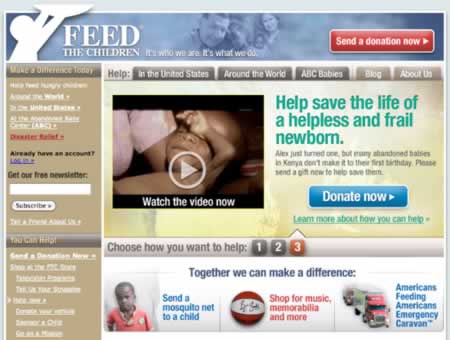 Feed the Children. Here are direct links to people in need, and the reach is more profound — still coupled with a sense of remoteness. Accessibility points are well organized, but the messaging is less than compelling. 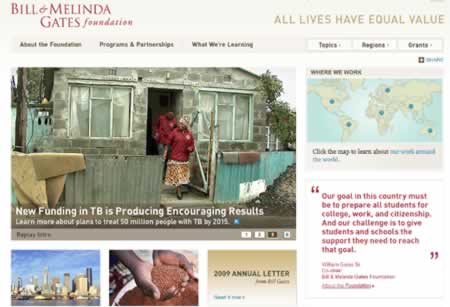 Gates Foundation. This is an extraordinary organization and fundamentally, they have the pieces in more correct array — at least to the explorations and provisions of this blog; that is — tell me a story that I can relate to, that will connect me personally to a challenge, that might, as well, imply that the ability to examine and develop solutions to crisis is well under way — and that if you link in to the programs of their management of those solutions you might feel in the best of company to achieve those ends. The layers of messaging are real, combining video and levels of storytelling that reach to various points of the psyche. 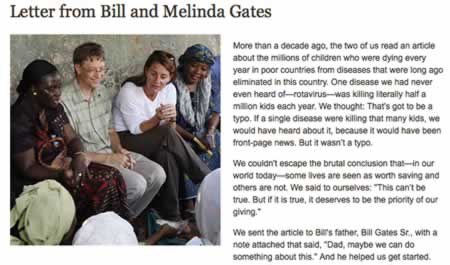 There’s a compelling additive to the Gates positioning — and this can be referenced “that’s got to be a typo”. That lends an implication of intimacy with one of the most powerful couples on the planet — that might be implied as a personal relationships; there’s a memorable story there — did you know “that Bill and Melinda Gates started their foundation because of what they thought was a typo?” 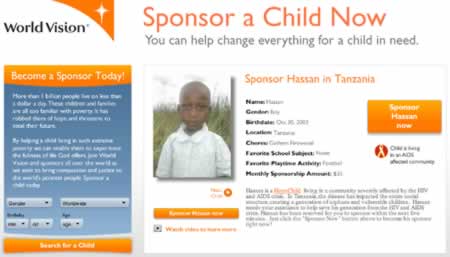 World Vision. This group, as well, has been a Girvin client in the past, organizing brand strategy and visualizations. The positioning of this offering reaches directly to the points that we’ve mentioned above — layer messaging, create points of access, tell a story and accelerate the reach to building solution paths. There’s a person there — and it’s all about that finding of the individualization in connection that supports bonding and relationship development.

The list goes on and on — and in each, the challenge is what is the story, who’s telling it, what’s the emotional connection linked to strategic expectations and what is the outcome to relationship development. Here’s the top 20 funded groups.

There are some closing positioning remarks that come from the opening heart of this review — any conclusion, any closure, first begins with finding the heart of the matter.

Nicholas Kristof, in the overview in the NYTimes, offers the insight “that humanitarians are abjectly ineffective at selling their causes. Any brand of toothpaste is peddled with far more sophistication than the life-saving work of aid groups. Do-gooders also have a penchant for exaggeration, so that the public often has more trust in the effectiveness of toothpaste than of humanitarian aid.” He continues, “In the case of fighting poverty, there are billions of other bystanders to erode a personal sense of responsibility.” As I’d mentioned, the individual referencing of scale is important — if the problem is too big to face, then it’s just that: too big and easily to simply shun. “Moreover, humanitarian appeals emphasize the scale of the challenges — 25,000 children will die today! — in ways that are as likely to numb us as to galvanize us. I also wonder if our unremitting focus on suffering and unmet needs stirs up a cloud of negative feelings that incline people to avert their eyes and hurry by. Maybe we should emphasize the many humanitarian successes, such as the falling child mortality rates since 1990 — which mean that 400 children’s lives are saved every hour, around the clock.”

As he notes, “There are no easy answers here, but if a toothpaste company had these miserable results in its messaging, it would go back to the drawing board. That’s what bleeding hearts need to do as well.”

We stand at the ready, to do more.

Exploring the idea of brand, storytelling, personality in the casement of simple typographic messaging Sometime back, we drew a font that we used for a series of soccer posters. We called it Girvenza -- for Diadora. It looked like this: Simple. Italian. When it comes to creating type for identity, more often than not, we…

Girvin | Movement: examining place, foundation and the archaeology of brand experience Girvin is moving, after a couple of decades in the same place