When I was at TED | Aspen, last month, I found myself in a world of people — my age and younger, late 30s, 40s, 50s — who were communicating with each other in interesting, technology-driven ways. And TED is surely the place for that. We were all there exploring technology, entertainment, design (TED) — reaching to each other, blipping messages to the outside world, and creating content and connections, live. Texting, twittering (live blogging from a mobile), emailing — and talking, sharing. We were twitching with ideas. We were not using the tools of digital connections as youthful instant messaging — but it was more about using the tools to connect and share information. Stories. Networking. LinkingIn. 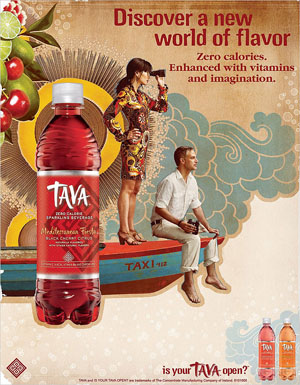 Pepsi has just offered a new brand to the market, TAVA, but aside from minimal print, and in-store merchandising, the bulk of the presentation of concept is new media. There’s an interesting twist to this modeling — and that’s the age of the target. Rather than skewing downward, to more youthful groups, it’s actually targeted upwards in the purchaser age range.

They began the buzz for the campaign almost completely online, more so than conventional beverage launch approaches. And why is that? Because, to loosely defined demographics, this is where people connect — to making links with people, their communities, and communications with, and in, their “space”. There’s nothing particularly unusual about that. But the issue is — if you’re reaching to someone (me), what’s going to keep me there? What’s the interchange, between me, you, the brand? And the story?

“The heart of it is creating more of an emotional connection with consumers by tapping into their natural inclination to tell other people about their experiences,” said Cassie Hughes, strategic director at Grow in San Francisco, which also works for marketers like J. Crew, Levi Strauss and Visa. For Tava, “the strategy was going in to talk to the right few who could fuel the many,” she added. (Stuart Elliott)

There are other conventional applications, like posters. These are in play in sales environments, supermarkets and beverage outlets. But that might be as far as it goes.

And I don’t even get the positioning of the poster visualizations, anyway — nor the headline treatment. What’s it? 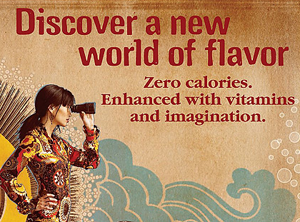 The North American division of Pepsi, focused on new media to introduce brand to the mass channels — in their new release of Tava. Other companies are following the play — Coca Cola, Kraft, P&G and Unilever and the attention is on the relevance of community building to spending advertising dollars in new media is growing faster than any others. To that, there’s no conventional print or television applications of promotion. http://www.marketingvox.com/?p=37336

Tava.com is the opener, like any start up strategy, leveraging the web as a possible intro to the concept — then building sampling events, delivery of free bottles to hip companies, banner ads and related promotions. The Web sites on which the Tava banner ads are to appear include AOL, chow.com, CitySearch, dailycandy.com, discovery.com, Evite, MSN, oprah.com, People and weather.com.

The point is about looking for unusual ways to insinuate to community — and to initiate the relationships. But there’s an interesting spin, in the typical modeling for reaching to underage and more youthful audiences. This isn’t for that demography — it’s being pitched at women and men, aged 35-49. This group consists of a kind of renewed digitals — transitionals — those that have grown up in a non-digital age but are now transitioning comfortably to new media — they’re accepting it. Living with it, living in it. Frank Cooper, vice president for flavored carbonated soft drinks at Pepsi-Cola North America in Purchase, N.Y. — “There used to be an assumption this target was not online,” said “But there’s a group in that category that’s ‘reborn digital.’ They’ve lived through the change and learned to adapt to it.”

This demography is about living in an online world, but working — and living in — the context of that world in a different way, more about work, less about gaming and messaging. “This consumer spends significant time online, although what they do may differ from the younger consumer,” Mr. Cooper said. “They’re not I.M.-ing their friends; they’re looking at e-mail or looking up information about travel, music, food.”

In addition to providing samples to employees of companies like Apple, Bliss Spa, Google and MTV, Pepsi-Cola is giving away Tava at events like the Sundance Film Festival and to customers of businesses like Frank’s Chop Shop, a barbershop on the Lower East Side of Manhattan. It will also offer the beverage to arts lovers at plays, concerts and festivals, and to celebrities at locations like the set of the TV soap opera “General Hospital.”

According to Stuart Elliott — and the media and brand strategists, “the campaign is zeroing in on eight major markets where consumers seem to appreciate soft drinks that contain vitamins and bear new-age flavor names like Brazilian Samba, Mediterranean Fiesta and Tahitian Tamure. They are Boston, Chicago, Denver, Los Angeles, Miami, New York, Seattle and Raleigh, N.C.” I’ve seen expressions in Seattle and NYC.

The idea for the banner ads is to “give you that taste, pun intended, for what the brand is about,” he added, “and increase your predisposition to click through to the Tava site.” But the challenge is, once you get there, what happens?

Not much, to my review — www.tava.com. I’m guessing that there might have been something wrong with the server, because it goes from the opening flash animation, to, literally, nothing. Where do I go, how do I connect, what’s the link up? 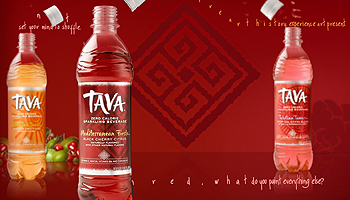 Links move to operational issues and FAQs. And an incredibly corporate looking Pepsi interface, completely disconnected from everything else. 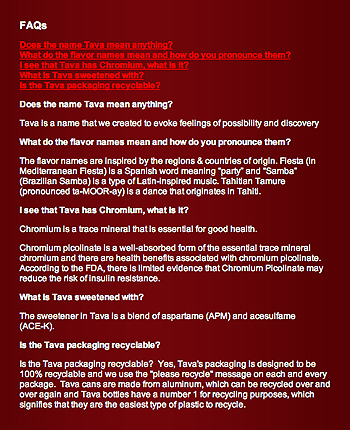 The final page, unadorned. Not sure of the moves here — as I’d mentioned, there might be server challenges. Otherwise, what’s the bridge to the consumer? 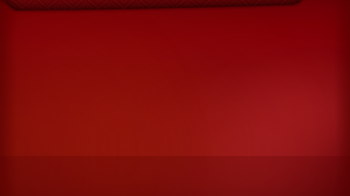 Blogger Beth Dunn comments, to their promotional challenges: “There’s absolutely nothing wrong with any of this — it all seems like a pretty standard new product roll-out, using internet ad buying and sampling events to promote positive word-of-mouth.

It just seems like there’s something missing – namely, a motivation and a method for the “targets” to start talking about the product, in a way that makes them feel like the company might be listening, and caring.

The problem is that after one or two points of contact with the product (ad, sample, word-of-mouth), the interested and engaged consumer gets turned unceremoniously over to a static website where they are only allowed to consume information, not provide feedback or contribute to the conversation in any other way.”

Other blogspace analysts offer a similar yet more detailed approach to what’s working and what’s not.

In the NYTimes overview, there’s something to the up and down of media trading (where you place your gamble to strategy) — that is, in television applications, there are enhanced potentials of immediate exposure — but the online presentations for hopeful audience access is risky. Newspaper print advertising, couponing and “free” openers reach to a faster relationship bridge to consumers — get something and begin the linking in to community — your shared community.

“The risk is always there that you won’t connect to consumers,” Pepsi brand director, Mr. Cooper said. “You can come from the top down and not get traction, and you can come from the bottom up and not get traction.” He concludes with the premise that building that bridge to the target the long tail is about building trust — brand + consumer; and it’s a sharing instead of a corporate throat push. The outcome, brand ambassadors (hopefully).

What I get? What’s the story, who’s telling it and who cares about it? And if I do care about it, how do I link into the content — sample, then share?

Girvin worked on the identity design for a new Peirce | Paramount Studios + MTV film. Kimberly Peirce is remarkably patient. It's been nearly 10 years since her last effort, "Boys Don't Cry", shown here, in the center, with her stars, Chloë Sevigny and double Oscar® winner, Hilary Swank. Agence France-Presse But the interesting thing…

The Dark Force | The Return of Myth in Brand Design

Exploring the concept of an emerging dark luster in design, it might be more so about the exhausting confusion and difficulties of the present market -- and the swirling chaos of the near future. What's happening now? Is the end nigh? Or night, near? What is wrong with where the world is heading? Is it…
We use cookies on our website to give you the best experience on our website. By clicking “Accept”, you consent to the use of ALL the cookies.
Do not sell my personal information.
Cookie SettingsAccept
Manage consent