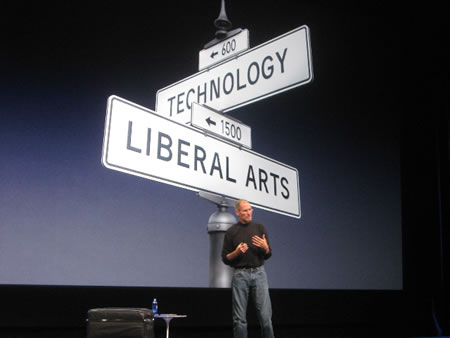 iPad 2: This past week, Steve Jobs showed up to a standing ovation for the launch of Apple’s new rendering of the iPad. “Here Comes the Sun” was the opening sound message — the clarion call to opening the brand storytelling (and spectacle). And the exit: “A Hard Day’s Night.”

The new iPad — lighter, thinner, more features, same battery life — the legendary 10 hours of working power; Steve referenced the hard day’s work, so to speak, of concentration. “We’ve been working on this product for awhile, and I didn’t want to miss the day,” he offered. 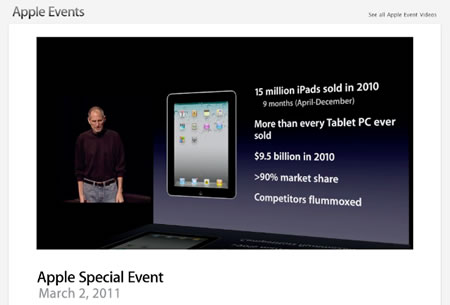 There’s a question to the modeling of transition that I’m curious about — thinking about the CEO as Creative Director. If Jobs might be defined in this manner — what then, to passing the mantle? In a recent talk that I gave, one person inquired about the idea of the human brand, and the relation to leadership transition. It was pointed out in an after review of the talk that I didn’t quite answer the question — completely. “What about Martha Stewart, for example? She’s transitioned…”

Actually, answering the questions of the human brand strategy, transitioning, cult and culture of brand — brand / human legends — it’s a tough one to simplistically respond to. If there are central points of inspiration in the opening ripple of the brand, the “red threading of leadership” and compelling ideation, then what happens if that someone leaves? The idea of transition is compelling in Apple’s case – in this modeling, there is a cultish, tribal sensitivity to Steve Jobs — he is “the man.” What next, in his challenges with the battle of health?

To answer that question more concretely, it might have to do with the metaphor of the ripple — what stone falls, what ripple emerges — and will the ripple continue, if the stone does not fall? It would depend on the stone itself — to the allegory of the pebble and the rhythm of the idea — but what if the idea — and the person — is a consistent string of inspirations? Or what if the leadership strategy presumes that all the great ideas come from one person? The proposition might be that Steve’s principles — and the principals surrounding the light at the foundation of ideas — are synchronous. Human brands enflame inspiration — the heat radiates. It’s vision that sparks the attitude, but the flame needs ignition – fuel on a constant basis. The complexity of the drive of technology is never about the single refinement of the idea, but the refinement of the ideal, which iteratively expands. While Steve is the “terrorist” who’s run the corporate creativity with endless zeal and passion (and created the tribal passion brand of Apple).

So the real answer to the question would be that while humans fire brands, the power will be not about that person alone, but the teams that are enchanted by that leader. There are plenty of stories about the passionate character of charismatic leadership — that is, at the once, nearly crazed with commitment and attentionality to the core drivers. For Steve Jobs, the intriguing balance might be the juxtaposition between creative leadership, design leadership and the positioning of chief execution officer. 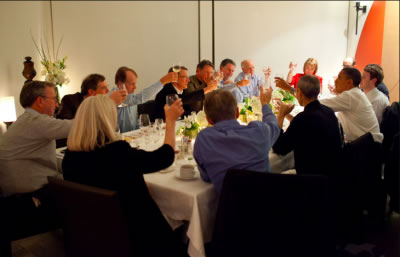 In examining Obama’s mix of technorati for a dinner discussion, the link was to “his proposals to invest in research and development and expand incentives for companies to grow and hire,” according to White House Press Secretary Jay Carney. Research, develop, expand? Is that about design? Sure it is — the leading of companies, the scribed arc of visioning and “nowness” that drives them speaks to the creativity of their distinction. Stepping beyond nowness is wowness. It is about the uniqueness of the story that will build something new, something “magical” as Apple puts it. The culture of innovation is of enormous value to where a company goes, in the spirit of change — you either do, or you don’t. One lives, the other modeling speaks to recession from the view of audiences.

There will be vision — and that centric derivation can come from seasoned insight. Steve Lohr offers that “before the iPad tablet went on sale last year, Steven P. Jobs showed off Apple’s latest creation to a small group of journalists. One asked what consumer and market research Apple had done to guide the development of the new product.” To the answer, Jobs offered — “none, it isn’t the consumers’ job to know what they want.”

“Steve Jobs has this extraordinary ability to see into the future and instinctively see what people want,” said Michael A. Cusumano, a professor at the Massachusetts Institute of Technology’s Sloan School of Management. “He’s done that consistently, in a way no one else has.”

The point, to creative leadership and execution is the balance point of the human brand, that is: great leaders and creative directors can mix the dimensionality of the one — creativity in inspiration, coupled with maturing insights that forge different sensitivities to knowing what people want and need. And what it should look like. And feel like. And potentially, the rightful telling of the story.

Lots of allegories and metaphors played and plied here, but they all evince the same.

THE INTEGRATION OF LAUNCH | HOLISTIC AND INTEGRATED STRATEGIES FOR BRAND RENEWAL I missed Howard Schultz, down at the market, ringing in the bell for the NYStock Exchange at Store one, Starbucks, the Pike Place Market -- 6.30am, 3.8.2011, the ringing intonation and celebration. While I was up, and working, I wasn't down at the…

The Animation of a Story, the Human Brand: Johnny Cash See this, beginning. What to the idea of drawing on drawing -- the draftsman overlaying the drafted line; one stroke expands yet another; each, a stroke, telling that story? There's a distinct fascination in watching someone draw -- and in that drawing, there could be…
We use cookies on our website to give you the best experience on our website. By clicking “Accept”, you consent to the use of ALL the cookies.
Do not sell my personal information.
Cookie SettingsAccept
Manage consent