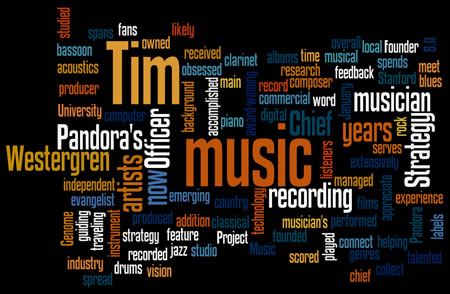 I can recall, in the very beginning, the idea of Tim Westergren’s notes on the concept of Pandora. Back then, an email to Tim would be returned, and that the story of forums, town hall meetings and other distributions of the authentic character of his story would emerge as earnest, optimistic, energetic. Staying in touch with him, watching him, exploring there were the expected evolutions — on the one — growth and acceptance, on the other, the challenge of a modeling for financial success. Ads, or not to “ads,” specialized membership — premium levels of involvement?

To the notion of the principles of “Free” relationships, this modeling has been particularly important. People have a connection with Pandora because it is free, but more so, that it gathers the very heart — and soul code — of the musical embrace, and codifies that in a repeatable manner. It seeks out and defines emotional relevance and resonance. People relate because they are selecting precisely the stringed framing of notes that they are looking for — nothing more, nothing less.

In a way, the idea of brand — fire — is the inflaming passion that Tim carried on the road. The sweet truth-telling, as well, led Tim to the pleas for support (which reminds me in a way of the Wikipedia requests for contributions). Nearly four years ago, Westergren’s Pandora, fabulous as it is conceived, was on the brink of bankruptcy. That “rupture” has changed — and to certain observations, that transition occurred just this past year. MediaWorks notes, at the Detroit Auto Show, among the most-cited broadcast partners in the year’s forthcoming Wi-Fi enabled navigation systems — Pandora’s consumer call was crystalline. “Yvonne Malmgren, a spokeswoman for the BMW Group, said Mini drivers overwhelmingly asked for the service when the automaker started researching potential partners for its new Mini Connected App player. “We had two very crystal-clear requests. No. 1 was, ‘When is Pandora coming? When can I control Pandora without having to touch my phone?’ And two was, ‘When are you making this available to other phone partners?’ This was more about meeting customer demands than anything else,” she said.”

That sense of volume is big, 2010 — turning it up: “Smartphones really turned Pandora into an anytime, anywhere service without us doing anything,” Pandora founder Tim Westergren said. He’s mentioned as well, the the real power of Pandora is the moving ubiquity — half of smartphone listening is done in users’ cars. The simplicity of the modeling has paid off, but in a rather unexpected result — according to Andrew Hampp, “registered users on the site skyrocketed in 2010, growing from 40 million to 75 million within the span of the past 12 months. On a monthly basis, Pandora has seen unique streams grow from 251,000 in November 2009 to more than 585,000 in November 2010, the most recent month measured by online radio metrics firm Ando Media. That’s enough to give Pandora a major edge over terrestrial competitors like CBS Radio, which reached a monthly average of 165,833 listeners during November 2010, and Clear Channel’s streaming network, which reached 125,498 average monthly listeners during the time period.

And yet, streaming radio — let alone Pandora — is still very much in its early stages. According to research by the Radio Advertising Bureau, streaming radio only represents about 4% of all radio listening. But with an arms race among HD and satellite radio providers to get a larger share of car installations, Pandora was the surprise victor at this month’s CES” 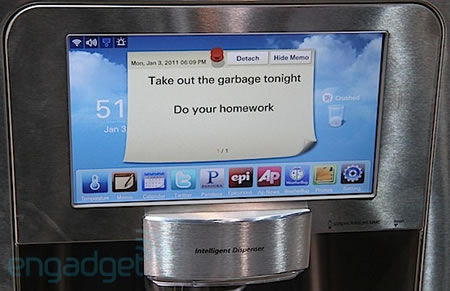 The idea of moving from devices, to home appliances — even refrigerators, as of last month’s announcements suggests the clustering model — the crowd gathered round, the passionate source / audience magnetism. What I also contemplate is the idea of the coding of the brand — the human genetics of how it works, the personality, the story layering, the inspirations of connection and aspiration. The details of it are as magical and human as the springing melodies of music loved. Brands that are true to their heart will be true to their relationships — the ring of authenticity will be resonant because, in the heart of the beholder — the listener — it’s clear and true.

BMW and the physiology of branding the eyes with flash effect. What about the idea of using image flashing to imprint the retinal curvature of the inner eye thereby burning the image into their sight? This year will surely be about change. And innovation. And enchantment and influence in the space of marketing promotion and…

The Ring of Steel: Steve Jobs | and the Leadership Circle at Apple

The Fresnel light lens as metaphor Image: Girvin The rippling of leadership strategy and structure: brilliance, radiance and the rays of innovation. The metaphor of the amulet, the charisma and the vibe of Apple -- prophecies of evolution. There are those that might suggest that with the recent pronouncements of Steve Job's third medical leave…
We use cookies on our website to give you the best experience on our website. By clicking “Accept”, you consent to the use of ALL the cookies.
Do not sell my personal information.
Cookie SettingsAccept
Manage consent