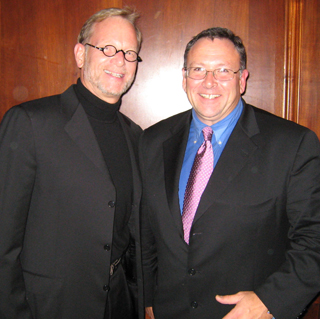 The annual gala this year awarded Paul Terlizzi, CEO of Capezio, its prize for outstanding achievement and contributions to the arts and dance community. And we’re proud to be partners with Paul Terlizzi, his teams, and Capezio for the last half decade, and this year, in completing yet another branding evolution for the organization in the merged strategies and visualizations of Capezio Balletmakers and Capezio Brands, Girvin’s strategic reference to a new overarching tactical implementation. More will be revealed on this in Girvin’s new website, to be launched in the next couple of weeks. In the interim, in this photograph by Alex Erikson — Tim Girvin and Paul Terlizzi at the President’s Room, The Harvard Club. Dance, the most energetically vital of creative expressions, motion song, embodied trance, captivates the swayed, motivates the participant; magic unfolds in the eyes, the bodies, the all, of all.

The casino's opened -- and Robert Earl is back on the block. While he's lost millions in the final daze of Planet Hollywood, in the earlier entertainment modeling -- somehow he's managed to bring back the glamor with a return to (and of) the earlier investors -- some of them, at least. Sure, it started…

Consider this -- three remarkable women, each dramatically challenged by trying health related experiences, each finding new truths in combining allopathic and naturopathic cures by exploring new models in healing -- and creating a business around them. And it's a story that is newly told in the retail medical brand: Naturo Medica. But the concept…
We use cookies on our website to give you the best experience on our website. By clicking “Accept”, you consent to the use of ALL the cookies.
Do not sell my personal information.
Cookie SettingsAccept
Manage consent