The death of Michael Jackson and brand, emotion, memory and sales.

It’s an unfortunate synchrony that unexpected passage boosts the propositions of the selling of that person. And, of course, this happens time and time again, looking back, over the deaths of many, during the last years. From the expanded selling of Heath Ledger’s presence in the latest Batman, catapulting that to an all time high, last week’s passing of Karl Malden’s legacy from old American Express protective agent covers to his old-school cop role in “The Streets of San Francisco”. And it surely goes far further than that — stepping — year by year, decade by decade, to artists, authors and others, whose loss stimulates recollection, and the return to the story, the brand, the humanized premise of commerce.

Human brands fit well into this modeling, for it’s the presence of the person, live, that builds the brand. Once they’re gone, there’s a burst of reconnection, since from that instant, there’s nothing more to come from that promise; it’s over — if there’s a reach, then it’s the last one.

Interestingly enough, it’s the selling of assets that were created sometimes long before that burst to new record levels — and in Jackson’s instance, it’s just that. Within hours of the word of Michael’s passage, millions of fans raced to purchase assets that are decades old — Jackson’s “Number Ones” sold over 100,000 copies, “Essential Michael Jackson” sold a similar amount, at 102,000, “Thriller” boasted 101,000 in new sales; since then, all the numbers have risen. According to Ed Christman and Antony Bruno the continuing surges are dramatic — and not expected to relent, but rather rise. 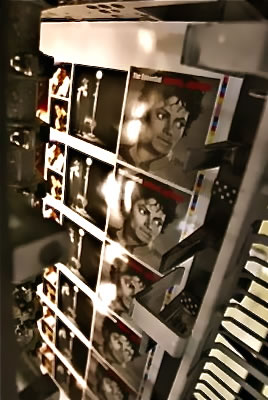 According to their story, “From the day of Jackson’s death until the following Tuesday (June 30), U.S. retailers of physical CDs had ordered about 3 million of his Sony Music Entertainment albums, while international orders hovered around 5 million copies, sources say. Although Sony had to scramble to meet demand, it got high marks for getting Jackson product to stores June 29, after most retailers had sold out of the artist’s inventory during the weekend.”

Rationing. Limited production. Massive orders — completely overtaxed the production, distribution and merchandising systems for retailers, as well as Sony. Of course, in the online and downloading selling market-space, the story continued. In the weeks before his death, 64 top-selling Michael Jackson music tracks sold a combined surge of 30,000 copies at iTunes — after his death, they tracked to 60-times selling ratio, to reach 1.8 million. iTunes sold roughly 1,000 copies of key Jackson solo musical properties — afterwards, 225,000 copies. Totaled, Jackson’s music snagged the top 10, of the top 15 best-selling album sales slots of the top 100. His singles mounted similar scores. And it expanded to virtually every other media — in downloads, MP3, and massive spikes in peer-to-peer file-sharing, jumping nearly 10-fold, in a day. Music videos, already highly viewed, vaulted skywards with added views of nearly a million new views, in every case.

To the conceptions of the connectivity — the emotional space — in the telling of all of our relationships to potent persona, powerful human brands have one element that supercedes all others. They are reflective of the emotional condition to the emotional sensing; since they are human, they share that sense of reflection — one person reacting emotionally to another.

Everything lives there, in story, in brand. You are either connected emotionally, that deeper psychic space, or you don’t link — there’s no resonance. Either the reach is robustly aligned to your sense of personal presence and relationship, or it’s not. Living, then in death, that mimetic boundary holds, once it is crossed, the loyalty — in friendship — emerges and concretes, forever.

The revelation of Starbucks retail design prototype two. I have a funny relationship with Starbucks. I've really never worked with them, yet I have these links to the creative leadership that allow for an intriguing consciousness about what lies at the heart of the brand and the explorations that they undertake. Friends in the right…

Exploring Quincy Jones, a vision of newly branding and defining the storytelling of music, culture, trend and coolness: Vibe Magazine Quincy Jones, who just happens to be from Seattle, one of the places that I live and love in, created about a decade and a half back, the concept of a newly wrapped vision of…
We use cookies on our website to give you the best experience on our website. By clicking “Accept”, you consent to the use of ALL the cookies.
Do not sell my personal information.
Cookie SettingsAccept
Manage consent