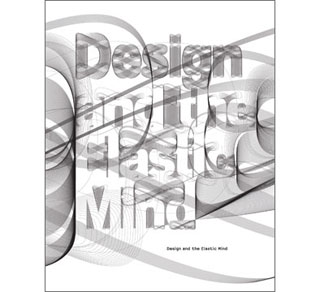 Organized by Paola Antonelli, the show opens with an act of high-tech graffiti. A can of spray paint is suspended from a system of cables and pulleys in front of a wall. A small motor guided by computer software winds and unwinds the cables, moving the spray can methodically across the white surface to spell out the show’s title.

It’s a nice, mischievous touch. And the precision of the script, in contrast to the paint’s fuzzy edges or the occasional drip, reinforces the show’s point that the old Manichaean duality between the artist and artificial intelligence, nature and machine, no longer holds. — Nicolai Ouroussoff | NYTimes 2.22.08 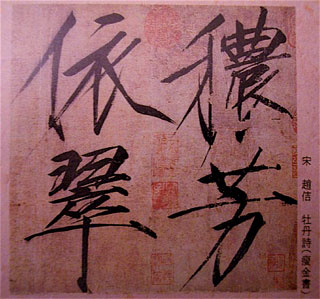 When I think about the drawing that I do, the work that I explore – steel pen in hand, rough bamboo reeded tool, scuffed handmade papers, handground pigments – the forms rendered, more often than not have a character in nature. Thinking of, for reference, the calligraphic tradition from which much of my design originates, nearly all strokes are nature-based in origin. The O, the curve of sky, the burning sun, the silent moon, the spin of cloud; the I — the stem of the tree, the branching stroke; almost any gestural ligature between the stem, the branch, and the next character is the leaflet, just sprung. In the calligraphy of China and Japan, the spirit of nature in inherent in everything — every single stroke, every nuance of form is not only symbolic (ideographic) but characterizes some form of nature: 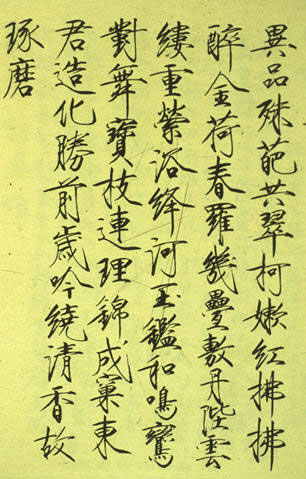 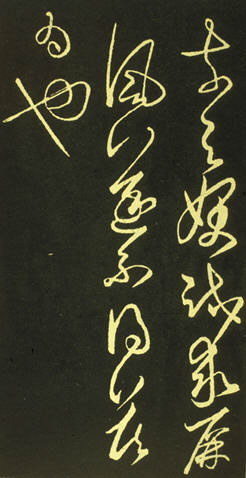 The Grass style of Wang Xizhi, from a rubbing in stone,
centuries earlier — 386-589.

And the concept of nature infusing this principle comes from the 6th century (and understood earlier, as practice), the idea of any object of beauty — particularly in the creative space of painting — deriving the power of nature and the spiritual forces therein.

Hsieh Ho, Six Principles for Evaluating a Painting — written circa 550 A.D., references “old” and “ancient” practices. The six elements that define a painting are:

1. “Spirit Resonance,” or vitality, and seems to translate to the nervous energy transmitted from the artist into the work. The overall energy of a work of art. Xie He said that without Spirit Resonance, there was no need to look further.
2. “Bone Method,” or the way of using the brush. This refers not only to texture and brush stroke, but to the close link between handwriting and personality. In his day, the art of calligraphy was inseparable from painting.
3. “Correspondence to the Object,” or the depicting of form, which would include shape and line.
4. “Suitability to Type,” or the application of color, including layers, value and tone.
5. “Division and Planning,” or placing and arrangement, corresponding to composition, space and depth.
6. “Transmission by Copying,” or the copying of models, not only from life but also the works of antiquity.

The first two are perhaps the most relevant to the idea of nature, force and spirit. And the relation to design.

Kindly excuse this lengthy sidebar notation that’s run its course in exploration about the links between nature, creative action and design. The other links, noted in the title of this blog — to the quality of creative exploration, is about adding that — science, human acceleration, natural connection and inspiration and the interlacing of these elements.

This blog notation is really about this: 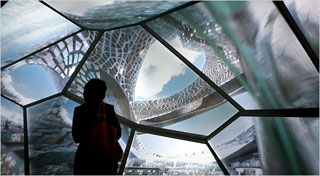 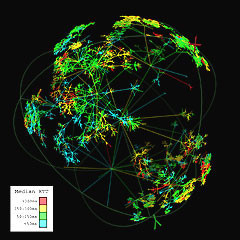 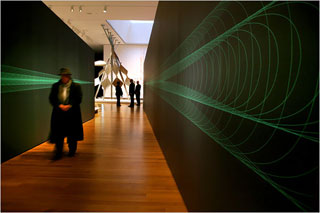 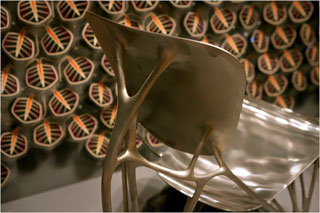 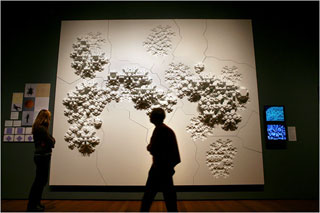 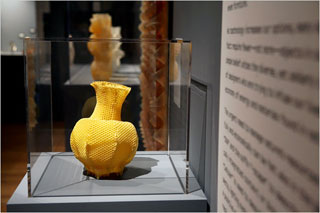 “Made by Bees” | Tomas Gabzdil Libertiny | Honeycomb vase
made by 40,000 bees 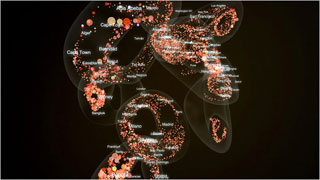 Two broad interpretations. One, roughly 1500 years ago, capturing the links of design (in and from nature), creativity and humankind. Two, a more modernist spin, essentially on same character of beauty — connectedness, design and the bridge to us, the future.

How can art be advanced to that link of nature?

We've talked about, or I've written about, that idea of retail experience in the context of feeling what the environment might be like. What if there was the chance to tell that story online in a more compelling, livelier modeling? Rather than the usual stuff – stuff hanging on the line. Stuff just sitting there,…

There are known levels of interactivity -- is it us, to solely reflect something rightly inter|active? Or is it how something we create that responds to environmental stimuli? We move by something...and a series of triggers offers shifting visualizations, actualization of tremor, presence, sound. Inter>http://www.troika.uk.com/troika%20news01.htm CLOUD - A DIGITAL SCULPTURE FOR BRITISH AIRWAYS TERMINAL 5…
We use cookies on our website to give you the best experience on our website. By clicking “Accept”, you consent to the use of ALL the cookies.
Do not sell my personal information.
Cookie SettingsAccept
Manage consent