I was thinking about the concept of enthrallment. It was something that was mentioned to me during an encounter with Diane Ackerman, the author and poet, who described herself, her life, in that manner. Life’s spinning, a series of enthrallments.

And in a way, that reaches to me, speaks to me. As a person. That idea of being in thrall. I explored the past uses of the word, as I am wont to do, in examining the meaning of things. Gather the etymon, you cull, to the center of the meaning, the memory, what is held there in the heart of the root.

I found this grouping of studies, running back in time.

And going back, further, to look at the connection of being “put in thrall”, it’s slave, intriguingly enough.

slave (n.)
c.1290, “person who is the property of another,” from O.Fr. esclave, from M.L. Sclavus “slave” (cf. It. schiavo, Fr. esclave, Sp. esclavo), originally “Slav” (see Slav), so called because of the many Slavs sold into slavery by conquering peoples.

“This sense development arose in the consequence of the wars waged by Otto the Great and his successors against the Slavs, a great number of whom they took captive and sold into slavery.” And here’s the jump, there.

O.E. Wealh “Briton” also began to be used in the sense of “serf, slave” c.850; and Skt. dasa-, which can mean “slave,” is apparently connected to dasyu– “pre-Aryan inhabitant of India.” More common O.E. words for slave were þeow (related to þeowian “to serve”) and þræl (see thrall). The Slavic words for “slave” (Rus. rab, Serbo-Croatian rob, O.C.S. rabu) are from O.Slav. *orbu, from the PIE base *orbh– (also source of orphan) the ground sense of which seems to be “thing that changes allegiance” (in the case of the slave, from himself to his master). And, by added inference, to the nature of a kind of ecstatic thrall, the hypnotic character:

mesmerize
And that etymology is more recent, a little more than 200 years back — 1829 from mesmerism, borrowed 1802 from Fr. mesmérisme, named for Franz Anton Mesmer (1734-1815), Austrian physician who developed a theory of animal magnetism and a mysterious body fluid which allows one person to hypnotize another. Transf. sense of “enthrall” is first attested 1862. Mesmerism is attested from 1802.

I think about the concept of enthrallment, to the character of the work that I do. Not in the context of slavery, or to that reference, servant. But aligned with service and connectedness.

What I mean by that is the nature of a relationship that is sufficiently powerful to be connecting, attaching, compelling, captivating; and in all that, enthralling. The relationship is reflective, one bound to the other.

What I wonder about is the possibility of considering branding as a kind of enthrallment, a connection sufficiently entrancing that the character is emotionally linked. It’s an entwining. What entwines, then? The reflective character of branding — that which is given, and that which is given back by that relationship, it’s a mirroring. It’s about reception and giving, reflectively.

And in the past, there are interesting expressions of what bewitches, what captivates an audience. For one, to example, mesmerism — that was a wave.

And to other references of bewitching enthrallment, this might be another. Transparency in environmental installation. Interactivity. Being immersed in something new, something containing. 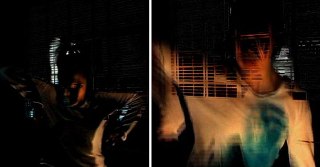 Artists, like Nell Breyer, a Research Affiliate at the Massachusetts Institute of Technology’s (MIT) Center for Advanced Visual Studies. talk about it like this:

* Interactive art installations allow us to explore different ways of perceiving motion, shifting our attention from object to action.
* Movement can be visualized as change. Stand still, you disappear. Move, and you see the difference between where you are now and where you were just now.
* Breyer’s installations help us gain a deeper understanding of how we interact with each other in space and time, collectively and individually.

I’ve emboldened these, above — to reference, further — the idea of brand and interaction, connection, enthrallment and relationship.

Artist Nell Breyer’s work explores how we perceive motion. She investigates the inherent contradiction between how we perceive movements—physically, in an instant—and how we conceive of them—constructing our understanding through the varied forms, modalities and abstract memories of the mind’s eye. These constructs can be different when drawn from our different individual backgrounds, instincts and daily actions. For example, an athlete might feel and imagine movement differently from an accountant.

How do we perceive, conceive, and experience movement?

Through interactive art installations, Breyer attempts: ” trying to draw viewers into the work, using actions, not just images. What you do helps to create what you see” says Breyer, “so that a passerby actually physically draws out his or her own movements by moving him or herself.” And so with brand. Reflectivity. I am what I am. I reach to find more, gather more, connect with more — that process is a mirroring.

Camille Utterback, another interactive artist, offers: My work is an attempt to bridge the conceptual and the corporeal. How we use our bodies to create abstract symbolic systems, and how these systems (language for example) have reverberations on our physical self is a matter of great concern to me. The dialog between these two realms is the subject of both my traditional and interactive work, and it is particularly relevant to our contemporary culture as we aim to grapple with the ramifications of virtuality and our increasing relationship with the interfaces and representational systems of our machines.

It’s a kind of story, that link between the person, the personal, the interactive, the customized, the mirroring of individual story and reaction in, and to, the world.

And without being too repetitive, that connectedness relates to other things — like branding. 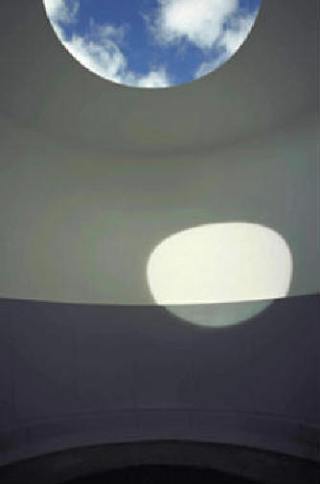 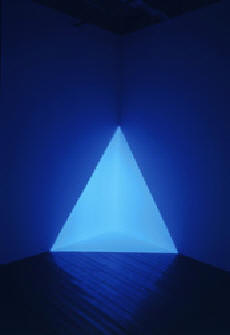 I’ve referenced, as well, the interactive character and explorations of James Turrell. That’s different, to visualizations and the complexity of his built worlds, but still, there’s a way in which the viewer is drawn in, connects, and makes something their own.

Back to the beginning, I’m looking for how that character of enthrallment works — the drawing in, the link between idea, form, story, visualization, text and inclusive — enclosed — telling brings the story out.

The idea goes back.

A rouleaux transparents for projection in space — 1783

Kathryn Shattuck intones these premises, to a sense of compelling renderings of interactive environments, enclosing experiences — made by lit projections of tracing paper projections. 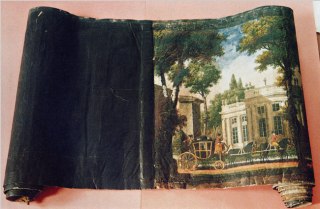 “In a new book, “Carmontelle’s Landscape Transparencies: Cinema of the Enlightenment,” the historian Laurence Chatel de Brancion steps back into prerevolutionary France to explore the pastimes created by Louis Carrogis, known as Carmontelle, in his role as resident entertainer at the court of the duke of Orléans. 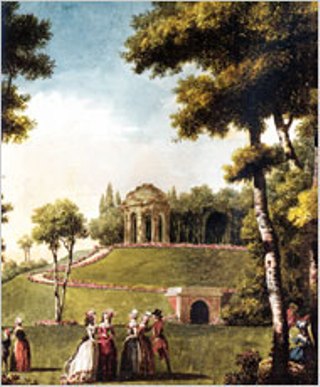 At the heart of the volume are Carmontelle’s experiments with light and moving images: rouleaux transparents, or “rolled-up transparent drawings,” a precursor to modern cinema. The luminous scenes of verdant parks and splendidly attired people — between 12 and 19 inches deep and up to 138 feet long — were backlighted with natural daylight, wound between spindles and viewed in a boxlike precursor to the television, often accompanied by music or narrated by Carmontelle himself. Carmontelle translated his visions — many of them drawn from his garden fantasies — onto fine English paper using watercolor, gouache and a special gum that allowed for brilliant transparent colors. Initially devising a “slide” that fit into windows between panes of glass, he traced exactly the view of leafless trees and bare gardens in the winter months, and then adorned them with luscious hand-drawn flowers and greenery. The effect from outside was an opaque white window. But from the inside it was like witnessing spring in full bloom.

At the same time Benjamin Franklin was astonishing Parisians with his displays of electricity, and light was the talk of the day, especially the white, oil-based kind already known in China and Russia. People were also experimenting with the magic lantern, an ancestor of the slide projector, and the concepts of the panorama and diorama.

Eventually Carmontelle concocted an invention that allowed him to combine the two. He created 11 known transparencies, many of which were later cut into sections and sold as individual paintings. Ms. Chatel de Brancion found seven in her explorations, including a 138-foot-long one that captures the lives of both the working classes and the gentry across four seasons in postrevolutionary France. Another depicts the slightly scandalous shift in fashion as inspired by Josephine Bonaparte.”

To summarize, if I can:

• Enthrallment, being in thrall, is a kind of mutual affair — one links to the other; they mirror — the one, to the other.

• Compelling realization of story can live in the place of interactivity and experiential renderings of that telling.

• Stories, in brand, or any other application, are about drawing someone into a space that they can relate — they have a relationship with the spirit of the story, the connections therein.

• Stories are inherently customizable — they are framed by people, and people personally frame them for them selves.

I’m sure you’ve got some thoughts about it, as well. How are you enthralled? What enthralls others? How does the sense of enthrallment relate to brand?

1. How did you get your start? My start? Raw curiosity for one. That's where it all started, that drove, and drives everything that I am made of. I am one that is easily enchanted by content. I can be ignited in a moment, if the right spark is there. A love of the exploration…

While it might seem profoundly obvious, the brand is inherently human -- it's about people, connecting to other people. People create brands -- the notion of a brand DNA is nothing but an explication of the concept of the precisely personal character of the human actions of commerce; it's not just that a brand has…
We use cookies on our website to give you the best experience on our website. By clicking “Accept”, you consent to the use of ALL the cookies.
Do not sell my personal information.
Cookie SettingsAccept
Manage consent