Equine Brand | The art of the horse 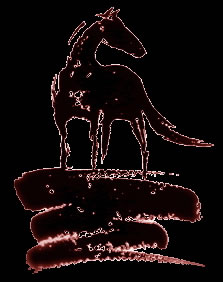 Working in Sweden, with a branding program with the luxury group Hästens I found exploring the history of the brand — which, in Swedish, means “Horses” — is intriguingly intertwined with a heritage that extends back in time, hundreds of years.

Hästens, the global brand, is a maker of luxury beds that range from the cost of thousands of dollars to literally tens of thousands, for the most luxuriant models. And they’re worth it — made entirely by hand of only the finest, all natural materials, the spirit of the brand evokes a kind of modern, even scientific, strategy of sleep and the fullness of rest, balanced with traditions of bed-making that leap back to the middle ages. Care, research, craft and finally — art, it’s a luxury brand that lives in the authenticity of its tradition, but is still focusing on consistency in evolution and advancement. Hästens, alone, is a brand that, in generation to generation, extends to the middle of the 19th century, 1852. Worth exploring, learning more, here.

While the notion of the horse and branding might seem a little far-fetched there’s some density to the history of the intertwining of horse and brand — it’s a legacy. Horsehair, while quintessentially a rare commodity also — by that virtue — has a connection that has been running in specialty markets for hundreds of years. A note to specific provenance:

“Horsehair refers to hair taken from the mane or tail of horses. It has various uses including brushes and the bows of musical instruments. The word is also used to refer to haircloth, a hard-wearing fabric made from horsehair. The term can also refer to horsehair plaster, a wallcovering material formerly used in the construction industry and now found only in older buildings; it has been replaced by drywall and other cheaper, more modern materials.

(Jan Ryde, CEO of Hästens with prepared and unraveled horsehair, and samples, below. Horsehair roping for shipment) 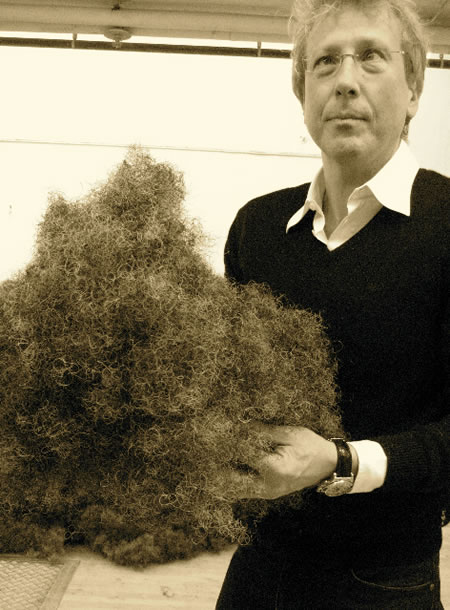 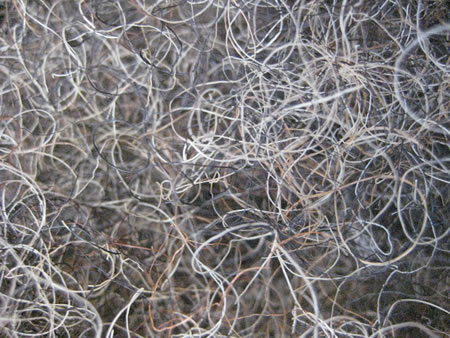 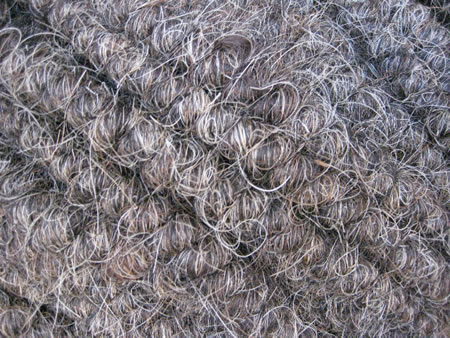 It can be very stiff or very fine and flexible, mane hair is generally softer but shorter than tail hair, which is longer and thicker. The quality of the horse’s natural hair may play a role, as it varies to some degree by breed of horse and nutritional conditions. The processing given to horsehair may also impact its quality.

It is used for the crafts of horsehair hitching, horsehair braiding, pottery, and in making jewelry. It is used to make some wall and fine arts paintbrushes.

While Hästens rules the bedding brand world, for luxury, and their handcrafted artistry of superlative places of sleep, there are other applications that are just coming on to the market, potentially repositioning the concept of horsehair altogether, mostly in the construct of luxury marketing. Or, less so, the utilitarian or the craft.

For luxury, take these, for example: 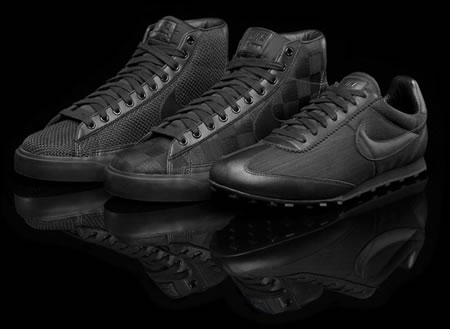 “With these $250 sneaks, Michael Maharam shot for what he calls “restrained opulence,” choosing a luxurious but underused fabric, horsehair. Nike calls horsehair “a renewable resource” because it’s clipped painlessly from the horse’s tail, but Maharam concedes that horsehair is not a practical replacement for everyday fabrics. “It grows slowly, is woven on arcane Victorian-era looms at a tedious pace, and costs a fortune,” he says. 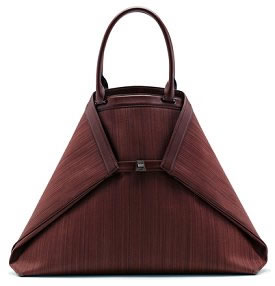 “Switzerland’s largest clothes producer, Akris, has added handbags to its 2010 line-up. The expansion coincides with the brand’s acquisition of Comtesse, a German firm specializing in the manufacture of materials made from woven horse hair. 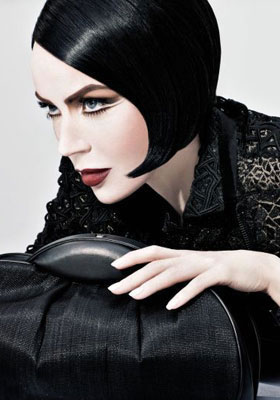 It’s no surprise then to see Akris release this striking Ai bag, which is made from horsehair. I love the futuristic trapezoidal look, and the horse fiber looks much chicer than haircalf ever has. If you’d prefer the Ai in miniature, look out for the similarly styled Amata clutch. 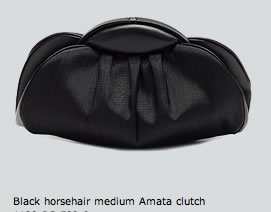 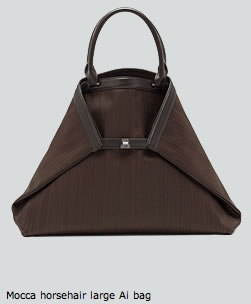 Akris is starting small with its foray into accessories, but it also includes a few horse-free options. There’s the Alice for those evening soirees, the Astaire for jetsetters, and the Ava for those who appreciate more everyday storage space.

The Akris bags are expected to hit stores, including Saks Fifth Avenue, Bergdorf Goodman, and Akris boutiques, in February, 2010.”

“The Graf von Faber-Castell Pen-of-the-Year is distinguished by painstaking craftsmanship and a unique combination of precious metals and valuable materials such as mammoth ivory, amber, or East Indies satinwood. Each limited edition is produced only through the end of its year. For 2009, Faber-Castell has chosen masterfully woven, genuine horsehair, a material used today for extravagant furnishings and luxurious fashion accessories.

Few creatures have inspired man’s imagination as vividly as the horse: Stone Age cave paintings preserve it in lively color. Deities are depicted on horseback, some even appear in equine form. The unity of horse and rider at the gallop brings about euphoric feelings – then as now. At the end of the 18th century, the wondrous mane and tail of the horse became a coveted material for chair coverings, first woven by hand, then mechanically loomed. Today, the fascinating options offered by horsehair are achieved only by artisans who have mastered the traditional art of weaving by hand.

There is one such expert in Germany: Dorit Berger, and her task is not easy. To create the filigree pattern of the Pen of the Year, the hairs are carefully selected for color and uniform thickness. Roughly 175 hairs are individually interwoven for each inch of fabric. Hair by hair, a weave develops with changing texture, light and dark, that contrasts beautifully with the cool platinum-plated metal parts of the pen. The fountain pen features a plunger-filling mechanism and the Graf von Faber-Castell bi-color, 18K gold nib that is smooth and responsive. The 2009 Pen of the Year comes in an exclusive wood case with a certificate of authenticity bearing the signature of Dorit Berger. On request, a pen can be specially made from the hair of your own horse.” 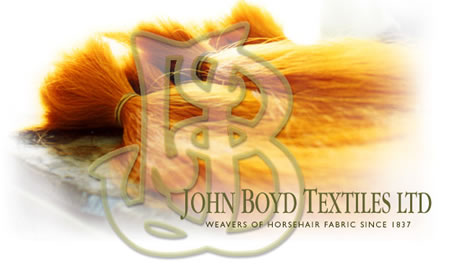 John Boyd, a traveling textile merchant from Scotland saw a potentially expanding market for horsehair fabric and liking the town of Castle Cary, he began weaving this cloth in his cottage. By 1837 he had become established and began to employ people to expand his output. Such was the demand for this hard wearing versatile hair cloth, that in 1851 he moved the process to his own specially built factory. The company became limited as early as 1883. 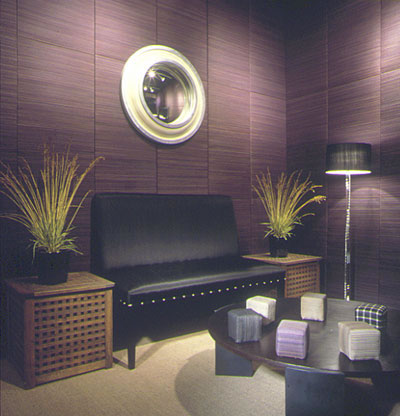 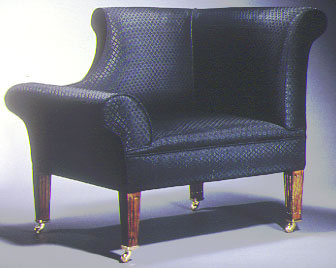 At the turn of the century, horsehair fabric was so popular that John Boyd became one of the main employers in the town, employing over 200 people weaving horsehair fabric. 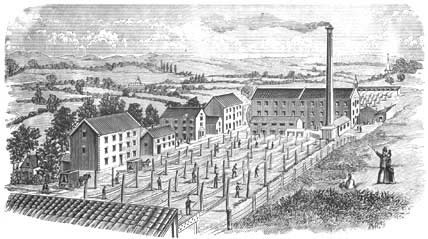 He contributed much to the town, building cottages for his workers such as Jubilee Cottages and Cumnock Terrace and the Liberal Institute. Although John Boyd died in 1890 his fabrics and the tradition of horsehair weaving is continued in Castle Cary to this day using the original looms and techniques of over 125 years ago. John Boyd Textiles Ltd is one of the last surviving horsehair weavers in the world. 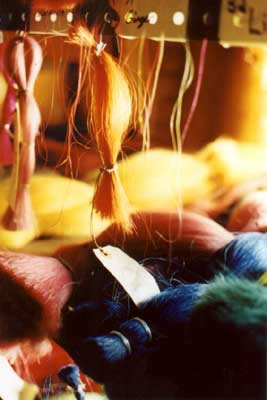 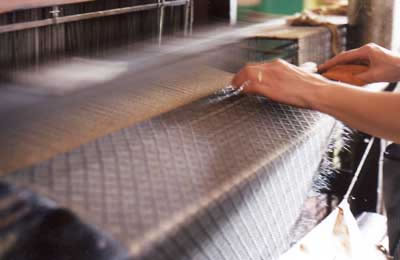 Earlier in my writing, I’d explored the idea of brand, story and retailing — retelling retail, and the spirit of the tailor, in the context of brand procession. Looking into the word, the tail, the tailor, the history…

tailor (n.)
1296, from Anglo-Fr. tailour, from O.Fr. tailleor “tailor,” lit. “a cutter,” fromtailler “to cut,” from M.L. taliator vestium “a cutter of clothes,” from L.L. taliare“to split,” from L. talea “a slender stick, rod, staff, a cutting, twig,” on the notion of a piece of a plant cut for grafting. Possible cognates include Skt. talah “wine palm,” O.Lith. talokas “a young girl,” Gk. talis “a marriageable girl” (for sense, cf. slip of a girl, twiggy), Etruscan Tholna, name of the goddess of youth.

“Although historically the tailor is the cutter, in the trade the ‘tailor’ is the man who sews or makes up what the ‘cutter’ has shaped.” [OED]

The verb is recorded from 1662; fig. sense of “to design (something) to suit needs” is attested from 1942. Tailor-made first recorded 1832 (in a fig. sense); originally “heavy and plain,” as of women’s garments made by a tailor rather than a dress-maker.

The concept of the tail, the tailor, the horse and the legacy of the relationship are intertwined. Digging back in time, the twining continues. As a person that has always loved horses, being with them, riding them, celebrating their imaginative impulse in the human mind, and with a long history in that relationship, to that, brush drawn them in — close. 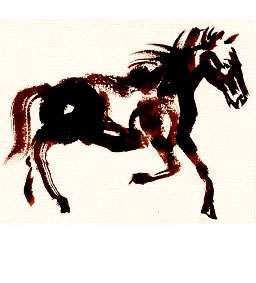 Ben Affleck | Fight Hunger Feed America Feeding America as the warmest bridge to marketing resonance Working on the mission of supporting cause marketing for humanitarian brands presumes commitment -- it starts with the extraordinary commitment of the founders, the leadership in the center of the idea, who are likely giving almost entirely of their…

The wave, the ripple, the droplet, the metaphor -- exploring allegorical symbolism in brand and business strategy. The idea of water is a metaphor that has consistency to the notion of exploring how people connect with each other: touch, connectedness, stories shared, ideas flow. One droplet sets a ripple in motion that extends, flowing in…
We use cookies on our website to give you the best experience on our website. By clicking “Accept”, you consent to the use of ALL the cookies.
Do not sell my personal information.
Cookie SettingsAccept
Manage consent