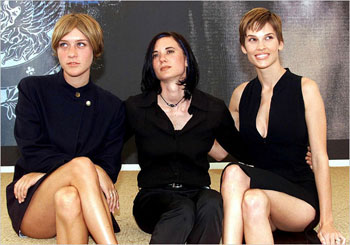 But the interesting thing about her is that she is amazingly, even dangerously (by Hollywood standards) selective. In the timing of the past decade, she’s only had one creative project (as Director for one episode, the “L Word“). 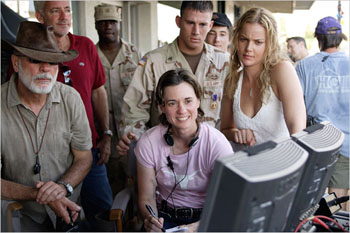 There’s another intriguing component to the care of her administration of her work — as director; for the last couple of months, rather than pursuing the typical Hollywood path of celebrity promotion, she’s been hitting the college circuit in the strategy of generating intrigue on a subject that’s hard to sell — a very ugly war advanced during a particularly terrible time in the US. “Jarhead”, “Redacted” and “In the Valley of Elah” are all dark films with little redemption — they all point to bad news and bad outcomes. Couple this with a bad economy, in the US, perceived by many to be exacerbated by the fabulously wasteful Iraq conflict, and the fact that there is rarely anything “rationally” supported in the nature of the conflict in resolution. That is, as well, we’re not doing much to contribute to the stabilization of a scenario which has been culturally conflicted for generations, religious and tribal schisms that are doomed to perpetual conflagration.

Why, then, another? I believe that this relates to Kimberly’s focus on potent issues that are now believed, in this application, to have personal relevance.

Stop-Loss, the practice, is about forcing enlisted and fulfilled service soldiers to return to duty, even as they’ve just returned home. Another current administration strategy, post 9/11, executive order in play.

For my take, my review and study of Kimberly’s legacy, it is about contemplation of the work at hand, having something in her exploration that truly reached to her heart. And perhaps, your heart. And willing to explore, even in a kind of Hollywood stasis, silence for a decade

According to the NYTimes, “Ms. Peirce learned about the little-reported practice from her half brother Brett, who joined the Army at 18, immediately following the Sept. 11 attacks. Speaking of her brother with palpable pride (and straightening her back when saying his name), Ms. Peirce recalled that during his tour in Iraq she would often wake in the night to beeping instant messages from him. When she would ask what he was doing, he’d type back: “You know, the usual: kidnapping, razing houses, stuff like that.” Ms. Peirce never knew how literally to take those missives” — Katrina Onstad, The New York Times. A.O.Scott, also from the same paper, intones: “Not that the movie’s topicality will necessarily draw crowds. For many viewers (and some critics as well), the prospect of another Iraq movie, like so much else about the war, is likely to be more wearying than galvanizing. But Ms. Peirce’s movie, which she wrote with Mark Richard, is not only an earnest, issue-driven narrative, but also a feverish entertainment, a passionate, at times overwrought melodrama gaudy with violent actions and emotions.”

The character, of the vision of the Stop-Loss graphic identity, will be about capturing the sense of masculine power — coupled with a patriotic tinge — that’s been, in many ways, damaged.

“When I talked to a wounded soldier who lost his limbs and still wants to go back, he told me, ‘It’s not the war, it’s the men,’ ” said Ms. Peirce. “That blew my mind. There’s this huge desire for camaraderie and male bonding.”

The film’s graphic visualizations, marketed by Paramount, suggest this alignment: 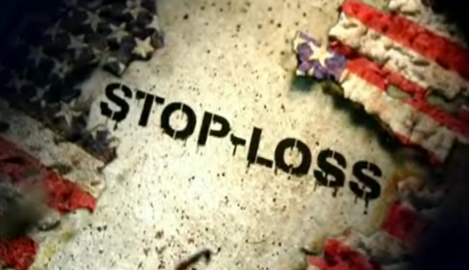 While this treatment — the trailer, was generated internally at Paramount Studios and MTV, which is on site at the studios on Melrose, Hollywood, we worked on the film as well, as identity consultants. Stencilled fonts, distressed treatments, detailed renderings trying to capture a sense of that masculine, bound to an ethos, rugged in war, and writhing in pain at the very nature of that experience.

In addition — Girvin’s been involved with other, similar explorations — working with Tom Cruise on “Born on the Fourth of July”. One of the treatments shown here: 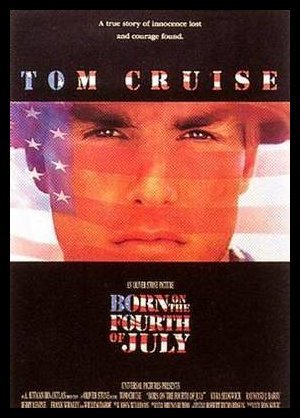 And, earlier, working with Oliver Stone, on the preliminary work for “Heaven & Earth”. 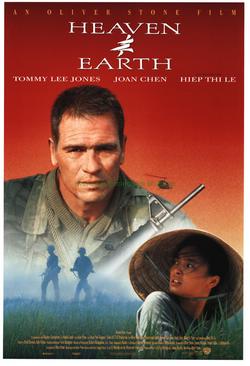 The key is idea and image, story and visualization, memory crystallized.

What’s your take, did you see the film?

Rem Koolhaas A new vision in Dubai is an amalgam of the plain with the bold -- OMA & Rem Koolhaas "Dutch architect Rem Koolhaas revealed his concept of “the generic city,” a sprawling metropolis of repetitive buildings centered on an airport and inhabited by a tribe of global nomads with few local loyalties. His…

Buzzing, twittering, twitching: Exploring community development in online new media launches. When I was at TED | Aspen, last month, I found myself in a world of people -- my age and younger, late 30s, 40s, 50s -- who were communicating with each other in interesting, technology-driven ways. And TED is surely the place for…
We use cookies on our website to give you the best experience on our website. By clicking “Accept”, you consent to the use of ALL the cookies.
Do not sell my personal information.
Cookie SettingsAccept
Manage consent