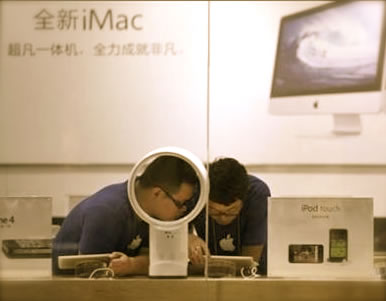 Workers at a fake Apple store with an iPad tablet in Kunming, Yunnan province, on Friday.
Wong Campion / Reuters

The Soul of the Brand Material

In the emerging wild east of China, the idea of counterfeiting continues as the savaging of anything and everything duplicable.

In a way, it might be said that this sense of duplication is the legacy of the vast machine that is China, that focuses on remaking everything — in extraordinary numbers. That might be commissioned, that might be self generated, that might be pirated merchandise. So the idea of remaking stores, building their own sales from the mystically imaginative smoke of concept and ideation, and simply duplicating it, falls right in line with that heritage. Get a prototype and “make” it. Why not retail holism? Get a prototypical store concept, discover the code, remake it, and build it. And, they will come — supposedly.

They are copiers, one might ascertain. In the heritage of the China, historically, the grand lineage of trade, copying, duplicating, lies in the heart of commerce. Make one, make many. Make money. But, there might be a challenge — customers in one store, located in Kumming, have returned in anger, saying they were misled, demanding their money back. 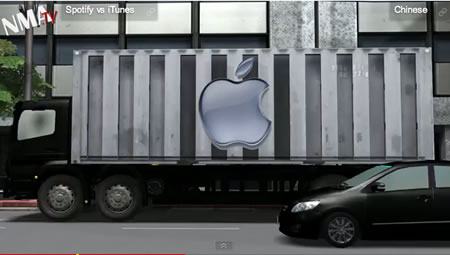 There is a soul link, to the finding of space and the place-making of retail environment. It’s been pointed out that even though these stores try to duplicate the stores and their products, they aren’t necessarily believable; things don’t feel right. Though, by some, the store is called “pretty close to the real thing.” What’s missing then? Truth, for one. Vibe, another — the integration of intention (forward focus) and holistic vision. Retail “pirates” can’t copy everything — there will always be something missing.

Therein, the soul of placemaking and the magic of the touch of how things feel — including the employees that work there; is the brand story aligned, is the character of the place tuned into the central visioning.

But, the copy has a legacy. That idea is relatively ancient: copy. It’s a word that’s Latin — copia, which in turn links to “copious.” That idea of copying is about transcription — from the later Medieval Latin, copiare, “to write in plenty.” Copycat is American, from the late 1800s — and later, in US parlance, as a verb — from 1932; to “copy+right” is the right to make and sell copies, as a verb — 1806. And to replicate (as a reply) almost speaks to a Chinese response — ask the question, “could it be done,” and it might be implied that the answer is “yes.”

You make. It can be copied. Apple makes, and one of their key cultural partners can make it. This will be challenged. One copy can surely beget another.

As a designer, moving from the non-digital to the digital age, from the live painted brush and scribing pen, film in the camera and negative burning the metal plates for printing — things change; it’s possible for anything to be copied. In working with a designer in Korea, corresponding, it was possible for him to move online, and gather texts, pictures, illustrations and reframe them all in another article. All, really, in barely communicating with me. Files can be duplicated, illustrations can be copied, manipulated and retooled — in the hands of one, and then in the digitized hands of others; textures gathered online, photographs can be photographed — one copy, another made. It’s the age of copying.

It might be noted that, in the end, reality pays, authenticity energizes — people relate to — and celebrate — the legendary real over the falsely defined.

In Shanghai, with the power of two monster stores, perpetually packed with Chinese customers — many of whom aspire to the newest versioning of Apple whatever — committed, waiting product sentinels, Apple is now considering building a store of even greater magnitude there. Two stores in Beijing and two stores in Shanghai — these four are the top ranked Apple stores, by volume, in the world. Building more — plus, likely dozens of others in an environment that now represents the number one market in the world. These stores, representing sales toppling the dollars per square feet of the prized 5th Avenue / Central Park South glass cube, (whose numbers surpass the baseline for a luxury retail showing.)

Tim | Santa Barbara
….
GIRVIN | Brands that are built on truth
EXPERIENCE DESIGN | THE STRATEGY OF MEMORY

Fast Casual Food Experience Design: The Place of Technology and Touch How Designed Does It Need To Be?

The context of designing places that are human, places that are not. In the principles of fast casual food / beverage design, a mid-priced, faster service experience proposition, the notion of the holistic character of guest presence has to do with a layering of expectations. No restaurant will survive if their food isn't any good.…

The Alphabet | A History of Girvin Calligraphy

Early hand drawn explorations of the letter IMAGE: GIRVIN | hand made cut star alphabets in 12 languages –––––– There's a rhythm to the alphabet, drawing it, the forms can flow from one character to another. The story of their evolvement is a legacy of thousands of years, and the movement of the hand's rhythm…
We use cookies on our website to give you the best experience on our website. By clicking “Accept”, you consent to the use of ALL the cookies.
Do not sell my personal information.
Cookie SettingsAccept
Manage consent