Human Brand Design: Ethos > Fashion | Valentino and the End of a Career

To the nature of the human brand — the story that lies in the character of the person and how that genetic quality extends outwardly — there is, perhaps, no better place in the designer’s world, than the realm of designed power and human connectivity, in fashion.

More so, perhaps, (many will argue this point) than architecture — and architects — there’s a character in fashion that speaks of the sheer numerical power — and financial outcomes — of something beautifully made.

And perhaps at the top (there are more stories to come on this weblog and exploration) of the fashion designer positioning, here, the epicenter in the present era, is the spirit of Valentino. 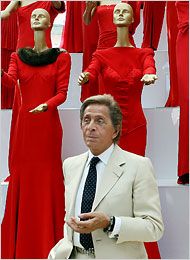 “There is the permanent suntan. There is the yacht perpetually moored off of Capri. There is the suggestion of a private world of endless glamour. There are the French chateau, the manicured gardens and the menagerie of pugs. And then there is red.”

No other designer of the last century could be so instantly, globally recognizable, by a grouping of visual and stylistic cues than Valentino Garavani, the Italian fashion mogul described by his partner –Giancarlo Giammetti in a 2004 profile in Vanity Fair. During the long coursing of his prolific career, 45-years as a Rome-based couturier, Mr. Valentino has dazzled in the mannering of excess in his clothes — extraordinarily lavish excess in his life that he has become known professionally — Valentino. The actor’s nickname was The Sheik. The designer’s, given to him by John Fairchild, the retired publisher of Women’s Wear Daily, is “The Sheik of Chic.” The Italian movie star and fellow romantic, Rudolph Valentino, was known by his surname. An attractive alliance, surely. And a boost to the character of Garavani. 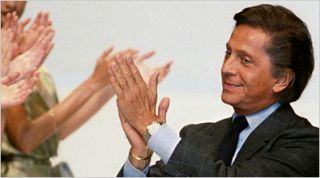 There’s the story to the character of the man, the sources of his inspiration. In the 1950s, Valentino left Italy when he was a mere teenager — 17, to study fashion design in Paris, later assisting Jean Desse’ and Guy Laroche. The Garavani collection emerged on the scene in Roma — on the Via Condotti, 1959. This was the beginning of the charismatic quality that attracted the stylistically refined stature of Jacqueline Kennedy, as well as movie stars, celebrities, countesses and others so enthralled to the magnetism of his clothing — yet, more importantly, to the spirit of the man himself. There is a sense of warmth, as well as the path of luxury that is evident in all his collections — but nearly everything seems to reach to the red carpet — and, simply: red — “his trademarks, consistent throughout his career, are nail polish red gowns, tiers of ruffles and an allergy to denim. A typical Valentino collection can include as many as 50 varieties of red-carpet-worthy silk gowns, in columns, voluptuous wraps, halters and deeply cut sheaths, with another 50 or so day suits in pastel cashmere or fine lace. The fur, paillettes, beads and feathers.” 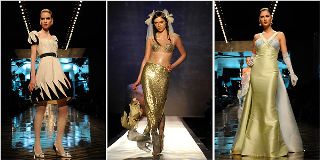 And the situation, to the close of 2007 — and now, the beginnings of 2008, is that, for Valentino — it’s over, as it’s been defined — “before it could be fully absorbed.” At the Rodin Museum, he closed the spring 2008 haute couture collections and — at the same time — ended 45 years in fashion. The models wore red — identical — dresses for the finale, the room was bathed in his favorite color. The audience stood, the applause started, the closing of the story and Valentino walked briskly to the end of the runway, dry-eyed and tanned from a ski holiday in Gstaad. And that’s the character of the man, the brand, the story — speaking of 360? positioning. It all flows from him. The spirit of the designer, the life that they choose to live, and that that character shows itself.

Valentino’s career, further articulating the spherical brand world that he lives in — and that as well of his partner, Giancarlo Giammetti, was that he allowed the media and the public to see how luxuriously he lived — whether in Gstaad, Roma, New York City or London. Paris schooled in the design of clothing, expertly tuned as an apprentice — serious in his focus as a designer, the extended character of his presence seems to be more about the expansion of that fashionable design vision to living. Living large, living luxuriously. In the clothes he made — it showed. He’s the only designer who lived the life that people think designers should live,” designer and milliner Philip Treacy commented, at the closing show of his 2008 folio.

As for the closing collection, it was true Valentino, as the designer himself characterized the collection — the couture effects were subtle and fascinating.

In inquiring if his career, at the end, seemed to have gone by quickly — Valentino thought for a moment and said: Yes, fast in a certain sense. If I think that my collection at the Metropolitan Museum was in 1982 — to me, that was like yesterday; I did a lot.

Human brand. It all flows out; the point is — what’s listened to, what’s comprehended and finally — what is held in the imagination of the attentive — that which is held fast to the heart.

And the final key, of course, in managing the brand of the person, is the care in which those threads are explicated from the weaving of the personality itself. It’s one thing to live large, it’s another to nurture those expressions, the manage the personal brand.

I'm always looking back. But never staring. All ways looking. In all ways -- exploring. Looking deeper. And in way, that's something to the way the we work, we think. Look deep. Go further. Be in: their there. Where they are. What that means is doing brand work that is about examining deeply in the…

I'd met Trish May, the foundress of Athena, several years ago -- perhaps closer to a half decade now, considering our history in partnering on her business launch. She was a Microsoft executive with some serious international business strategy and marketing exposure in her history. Frankly, I'm not sure how she found me, or what…
We use cookies on our website to give you the best experience on our website. By clicking “Accept”, you consent to the use of ALL the cookies.
Do not sell my personal information.
Cookie SettingsAccept
Manage consent