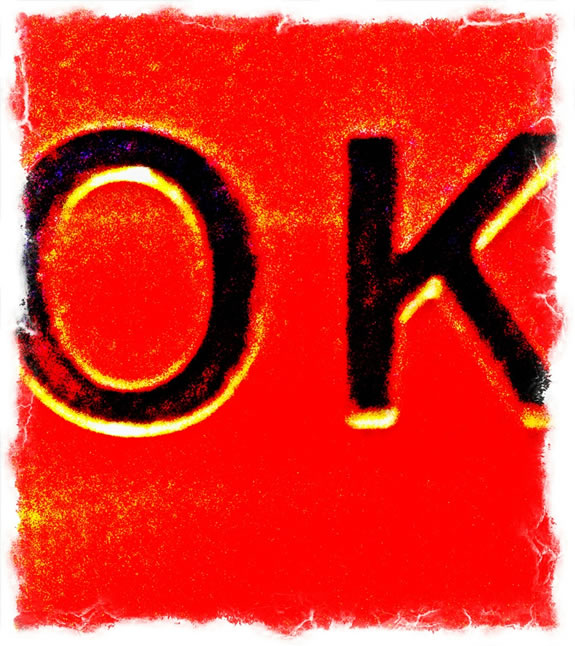 What is Okay, anyway?

I was thinking about the notion of OK,
what’s that mean, really?

The state of Okayness seems mediocre — it’s a condition where things are simply “all right,” alright.
All is right? What’s rightness, a place of stability?
Who cares about that?
It’s too easy.
What my impression might be is that right is a condition of balance –
you’re right in the balance of your world.
Standing, for example, up-right.

I reached into a friend’s site,
to gather his impressions.

In the case of O.K., the abbreviation is of “oll korrect.”

Probably further popularized by use as an election slogan by the O.K. Club, New York boosters of Democratic president Martin Van Buren’s 1840 re-election bid, in allusion to his nickname Old Kinderhook, from his birth in the N.Y. village of Kinderhook. Van Buren lost, the word stuck, in part because it filled a need for a quick way to write an approval on a document, bill, etc. Spelled out as okeh, 1919, by Woodrow Wilson, on assumption that it represented Choctaw okeh “it is so” (a theory which lacks historical documentation); this was ousted quickly by okay after the appearance of that form in 1929. Greek immigrants to America who returned home early 20c. having picked up U.S. speech mannerisms were known in Greece as okay-boys, among other things.

So the idea of okayness is a kind of old expression, but still, correctness
has never been a Girvin trait.
I’ve been breaking rules since the beginning.
All correct, as intoned above,
would be all boring.

In that line of thinking, “Brake” rules might be an option.
More so, the idea of seeking the heart of the word, something that I learned in middle school, studying Latin, is the etymon.
The etymon, according to the Greeks, several thousand years back,
is the true meaning.
Look back, look in, look deeper.

That’s okay, besides what your
friends might think.
Dig in.
Know more
than what’s on the surface.

The Perfume of the Forest

The Pitch for the Pitch; Resins, Sap and Crushed Conifer In the storm, the fragranced molecules of the woods come alive. A shower of pollens, wood dust, and if the storm is fevered enough, conifers snap needles, deciduous trees shear branches and leaves, bark curls and takes to the wind, a layering of fragranced notes.…

Small signs that tell a big story Environmental messages in place-making What if, when you came around the corner to a place in your office and there was a delicate message, reminding you of something, like: "Care"? "Do more, because you can." "Be better." What we've learned over time is that people notice the small…
We use cookies on our website to give you the best experience on our website. By clicking “Accept”, you consent to the use of ALL the cookies.
Do not sell my personal information.
Cookie SettingsAccept
Manage consent