Leaning in —the curve of listening 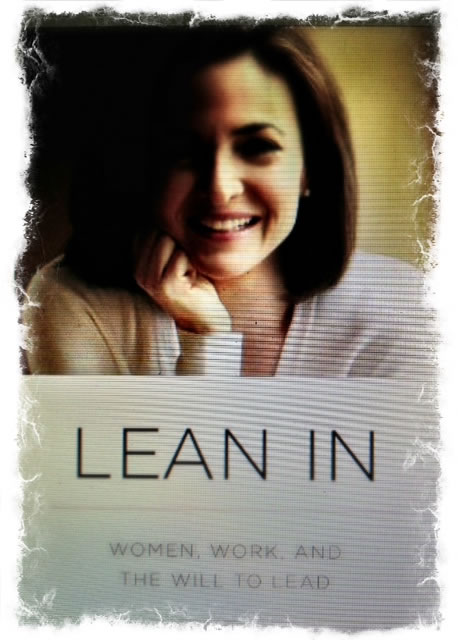 The angle of listening, listing and leaning | “Lean In,”
by Sheryl Sandberg

There’s no doubt that Sandberg is remarkable — the incidence of laudations about her come from every degree of the literary arc, including a recent string of notations in the NYTimes, which comes at a point when Mayor Bloomberg is propounding the potency of NYC as a staging ground for tech launches. Being a student, early on, at The New College in Sarasota, FLA, I had a chance to link up, live [as a student] with a role model of Sandberg’s history, and now — future visioning, Betty Friedan. She was speaking in one of the student halls, as a guest presenter — and, as I recall: a force, a presence she was.
Kinda scary, actually.
“A force of nature,” as her former husband called her.

All the women in the class were transfixed,
I was the sole man, during that presentation, which was mostly about her book,
“the problem with no name,”
theories and new directions for women.

As perhaps the most powerful woman in technology today, and “one of the most successful women in the world,” it’s her belief that mothering a movement to boost the power of women in the technology marketplace — perhaps more holistically — the “feminine leadership” marketplace shall be a wave: a rising tide, higher and higher, bursting from an inspirational ripple. She cites Friedan as a model in that legacy, emerging in a new reflectivity of cohesion and feminine magnetism.
Her strategy suggests that channeling, tier to tier, wave to wave, portal to portal — an ever-increasing circling of women, gathering women, supporting women.
As history suggests, the power of the feminine wave is unstoppable
–especially if it’s sparked by “a force of nature.”

What I was drawn to, immediately, was Sandberg’s inspired positioning, her core title and strategic reach — “the lean in.” Leaning is at the heart of listening – literally, to listen is to “list,” to lean in — that idea of a circling of women, rippling in, rippling out — leaning in, to share, explore, build — and in the huddle, strengthen is a profound bridging to metaphor — synced to strategy, coupled with meaning — which, in itself, harkens to mind, memory — the ment[al] of listening, collective consciousness and mutual synchrony.

When we contemplate the idea of listening — in the grammar of body linguistics —
a listener will lean in.
To list, inwards, in the desire of the sound and meaning.

That idea, the listing,
the inclination —
it is a gathering,
a [g]leaning in.
The Lean In.
That attribute of Sandberg’s formidable plan will reveal her
potent truth and experience. Let’s hope that the vitriolic acid being cast on her will find a more relevant and constructive point of analysis.

The writing, that goes back

The writing of the eternal return: the perpetual script of spinning time When you contemplate the road forward, there's a chance to look back, the path that brought you to where you are. [image above, from http://mattgirvin.org/] It's difficult work, when you're writing -- spinning out the drawn script of moments and instants -- about…

Twister | Kiev The metaphor of the story, the storm

Designing story, in place, the allegory of nature, space -- in making a place I find myself in the study of the symbolic, the metaphorical -- and, to the end, the magical. I recall when Apple defined the iPad as 'magical." An interesting choice of language in defining an object. What is magic? Etymologically, there…
We use cookies on our website to give you the best experience on our website. By clicking “Accept”, you consent to the use of ALL the cookies.
Do not sell my personal information.
Cookie SettingsAccept
Manage consent