When I was working in Paris, several years ago, I’d connected with Serge Trigano, talking to him about a series of projects. Serge comes from the family that originated ClubMed — a wildly successful innovation, that essentially revolutionized the concept of vacationing club-type adventures and specialized themed locations.

So, in exploring with Serge — it was about things to do together, things to collaborate on. We’d spoken together at the American Embassy — it was me, him, and Marie France Pochna. And, to the connections, I’ve still been linked up with them all.

But I was reminded about this link, this series of rippling connections, in speaking with Camilla Trigano, in a conversation with Davide Berruto. Camilla is the Director of Marketing, for Environment: Furniture— and in linking up with her, I reached back in my mind, exploring. I’ll write on that, more later. Another story. But in the one, the two are twain, three’s aligned. People commune, and you find them, the threads that make the one, the two, the three.

The more. And that’s what this is about — those strings.

In any case, back to Serge — there was one project that we’d talked about — Mama. And there were players involved already — but perhaps there was a place for my role. Most of what we talked about, then, was the strategy of the brand. What’s the story, what’s the telling — and how does that strategically link to the character of the brand, the place, the space of the marketing? I ask that question, all the time. I ask that question of myself, as well. What’s your strategy, Girvin — what’s your story, who cares, and who’s listening, for that matter? There are some of you out there.

Things unfold, and new treatments arise, ideations explicate — thinking | anew. Sparks fly — and there are range fires burning. Trends are found, discovered and built upon — and there are outcomes, in result. Nice to see. Intriguing to explore.

What I gather, from the press release — here are some opening appraisals: 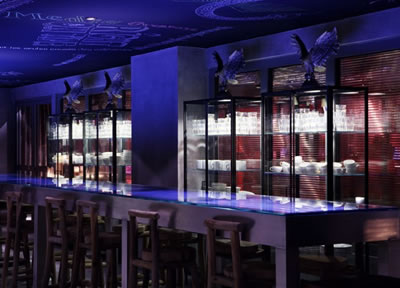 Or the Mother of high-tech hospitable living, as aptly put.

According to the hotel site review, Hotel Chatter, their take is that “the new hotel, located in the Saint Blaise quartier (20th arrondissement and on the edge of Paris), has 174 “digital” guest rooms that sort of give us of a trippy NYLO-meets-geek-chic vibe — with a techie twist.” 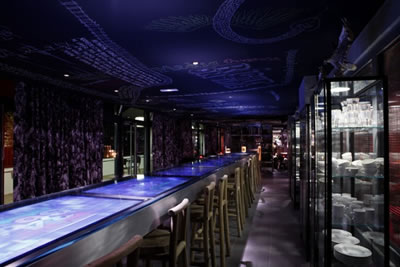 The French company DirectStreams has outfitted every guest room with an iMac. 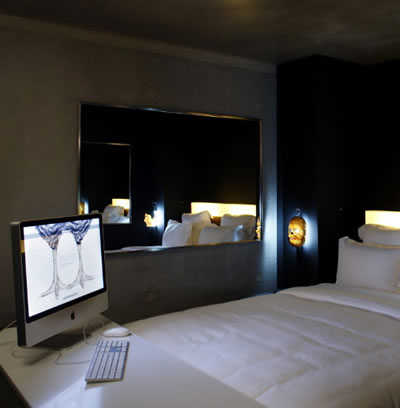 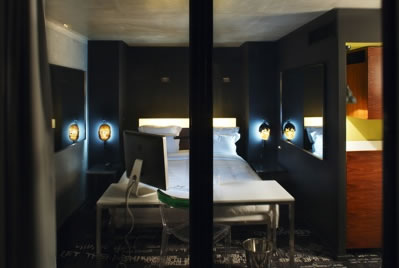 This, in itself, is nothing particularly groundbreaking given the plethora of hotel and hospitality-implanted iMacs into guestrooms — but Mama Shelter’s technology insertions actually act as comprehensive multimedia centers: a single terminal that offers every in-room digital service the guest requires from HDTV, to music, radio, CD, films, DVDs, Internet, etc. 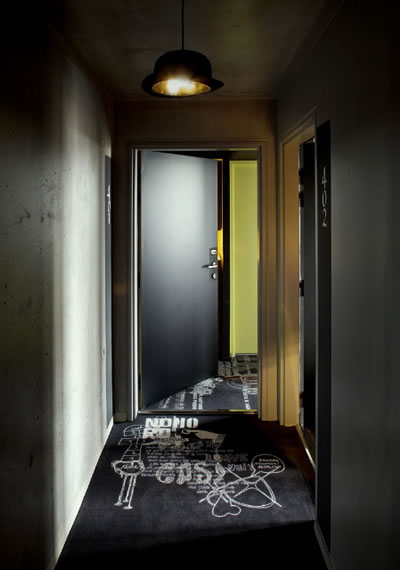 What I find amusing is the scrawly character of the graphics, interplayed in the carpeting, the flooring, the ceiling — and walled treatments. 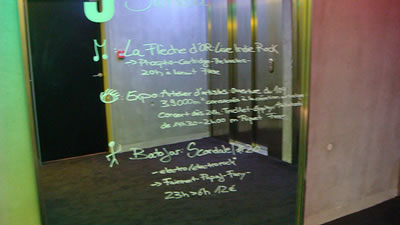 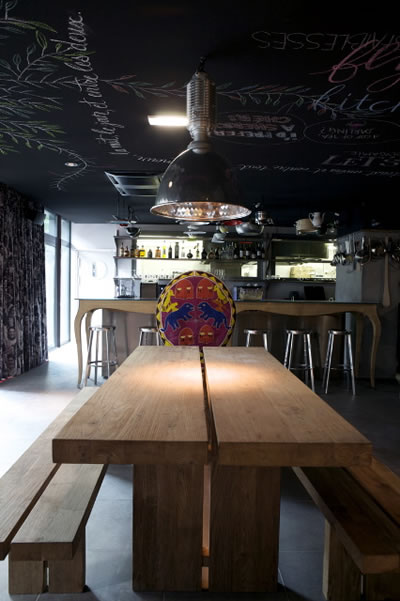 According to the press release, pushed into the market trades in late Fall, last year, the product evolutionary team is stellar. Or was stellar when they visualized the project — it’s done, and they are:

The architect of the building: Roland Castro
Roland Castro is a prominent French architect and urban planner especially known for harmoniously integrating politics with the importance of the society as a whole into urban architecture. His signature revolutionary approach to design demonstrates his belief that the landscape and not the building should be the focus of a city’s architecture. This stance was visible in numerous projects, where project housing inhabited mainly by immigrants and the socially disadvantaged in the suburbs was renovated. Mr. Castro was also commissioned by President François Mitterrand to work on the project « Banlieue ‘89 », an idea focusing on combating social exclusion by improving urban design quality in housing projects. Roland Castro also ran for President of France in the 2007 elections. He is the author of such publications as « Civilisation Urbaine ou Barbarie », « 1989 » and « (Re)modeler, métamorphoser”. He is currently one of the three leading architects in the firm « Atelier Castro Denissof Casi » responsible for projects ranging from building or renovating educational buildings, museums, offices, as well as ZACs (urban development zones). Roland Castro is 68 years old and was born in Limoges, France.

Serge Trigano – PARTNER | INNOVATOR
Serge Trigano is the son of Gilbert Trigano, the founder of Club Méditerranée, a corporation pioneering in managing exotic vacation resorts around the world. After having received a diploma in economic sciences at the University in Paris, Mr. Trigano made his way up the ladder at Club Med, where he started as a host (a « gentil organisateur ») to later become the president of Club Med. As the company’s CEO in North American he led to Club Med’s success, as well as its entrance to the New York Stock Exchange. In 1997 Mr. Trigano left Club Méditerranée, the company his family had owned for 50 years, and founded Town&Shelter, a firm that uses innovative ideas to develop and commercialize hotel concepts. He used his strategies to launch his latest project, Mama Shelter, along with his sons, as well as Roland Castro and Cyril Aouizerate. Serge Trigano is also a consultant in tourism strategy for hotel groups and State organizations. He also takes part in conferences and seminars regarding the evolution of tourism. In 1998 Serge Trigano and Gilbert Trigano published the book « La Saga du Club » describing the history of Club Med. Serge Trigano is 62 years old and has two sons, Benjamin and Jeremie.

Benjamin Trigano – PARTNER
Benjamin Trigano is the older son of Serge Trigano. He is the founder and owner of the M+B gallery in Los Angeles, which was established in 2004. The gallery represents the works of emerging, as well as established photographers. Mr. Trigano plans to open a second gallery, Benjamin Trigano gallery in 2008, focusing on contemporary art in all mediums and featuring cross-cutting exhibitions of artists from all over the world. Before engaging in art, Mr. Trigano helped his father establish the company Town&Shelter. He also worked at the advertising agency Euro RSCG in New York and was a member of the strategic marketing team for Coca-Cola in Atlanta. Mr. Trigano is responsible for developing the Park Meridien Hotel in Palm Springs. He holds a degree in history and political science. In 2006 he received the honorable Chevalier des Arts et des Lettres title from the Minister of Culture in France in recognition for his significant contribution to the arts. Benjamin Trigano currently lives in Los Angeles with his wife and two children. And, to the opening notations, the husband of Camilla.

Jeremie Trigano – PARTNER
Jeremie Trigano is the younger son of Serge Trigano. He was educated in France and the United States and received a Cum Laude in Economics as well as International Relations. He used his knowledge to work in an array of fields, including the hotel and restaurant industry (founding the restaurants DADA, BOBOs and A la Crepe in Turkey and working in Town&Shelter, a hotel management and consulting company). Mr. Trigano was also the vice-president of marketing and strategic development at Altour, a full service travel agency. He contributed to the company’s growth, helping it become the 20th largest Travel Company. In March of 2007 he became the vice president of marketing at Serge Trigano & Sons, where he was responsible for advertising, marketing and public relations of the Forges Hotel, a 99 room hotel in Normandy catering to corporate and leisure clients. The same year, he became the vice-president of marketing at the Mama Shelter hotel, scheduled to open in September 2008. Jeremie Trigano recently wed Düçem Trigano in the island of Capri.

Cyril Aouizerate – PARTNER
Cyril Aouizerate is a philosopher and a passionate of the city. In 2002 he combined his two interests to create Urbantech, a company specializing in the development of areas requiring restructuring. It works with economic, cultural and social stakeholders to roll out and find project and credit facility financing for complex urban projects. Advisors of cities, real-estate investors, mixed investment companies and bank executives all use Urbantech’s services to create, transform and develop urban areas. At the age of 24, Mr. Aouizerate published the biographical book « Rene Bousquet : biographie d’un collabo » about the former secretary general of the Vichy Police. After obtaining a degree in public law and political sciences he went to Jerusalem to study the teachings of Emmanuel Levinas with the professor of philosophy, Yeshayahou Leibovitz. Upon his return, two of his philosophical essays were published: « Crimes sans chatiment, fracture de civilisation » and « Horreur sacrificielle ». Cyril Aouizerate is 39 years old and lives in Paris with his two children.

Philippe Starck – COLLABORATOR
Philippe Starck is an unquestionable authority in design. He is one of the main representatives of the « New Design » style and is well known for his groundbreaking interior designs, as well as mass produced consumer goods. In 1969, he became art director of his firm along with Pierre Cardin, yet it was not until François Mitterrand requested Mr. Starck to design the interior for the president’s private apartments that the artist became well-known. Philippe Starck is widely recognized for the unusual combination of materials and organic look of his products. His interest for ecology and the cooperation with Pramac energy group resulted in the creation of a personal power-generating windmill. Philippe Starck is noted for the creation of designs for restaurants and hotels all over the world. Philippe Starck is 59 years old and has 4 children. 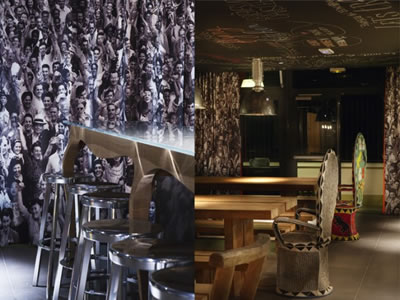 There is an intriguing sense about the underpinning thinking for the property, that is: there’s a philosophy; in fact, there are “philosophers” on board, attached to the actual development of the hospitality conception. 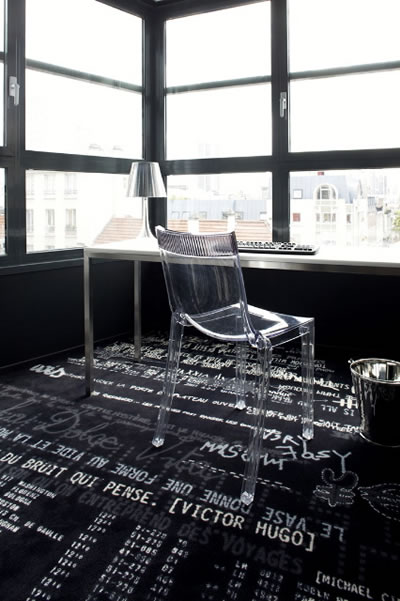 To my conversations with Serge, there’s a driving sentiment to the underlying intelligence, the contemplation of what lies beneath, in the advancement of everything that he does. He believes that there simply has to be more — it’s not just commerce, a go go — it’s thinking about the deeper intentions of connection – and collaboration, in thoughtful brand-making.

In connecting with Philippe Starck, at TED in Monterey, my sense is that even there, working with them, there’s not only a sense of the philosophic, in driving the brand story, but as well, a holistic connection in how he does everything. Even in his gesture to work with me.

In this emerging world, the concepts of collaboration are ever-present, and evolving — change now, the ways of your working, or die. There’s a need for that shifting. In fact, referencing some reframing of that grouping of ideas, coalition, cooperate, collaborate, coalesce — etymologically. Like this:

coalesce
1541, from L. coalescere, from com- “together” + alescere “to grow up” (see adolescent).
coalition
1612, “the growing together of parts,” from Fr. coalition, from L.L. coalitus “fellowship,” originally pp. of L. coalescere (see coalesce). First used in a political sense 1715.
collaborate
1871, back-formation from collaborator (1802), from Fr. collaborateur, from L. collaboratus, pp. of collaborare “work with,” from com- “with” + labore “to work.”

Doing that, being that, together. Works better. Work better. Time to grow up.

Molly Riley | Reuters This morning, early, a deep mist is crossing the channels of Puget Sound -- and the foghorns are calling out. I believe they are saying -- "I'm over here. Don't come over here", or something like that. Which has been contrary to our experience in learning about any variety of candidates,…

(www.goldenpaints.com/) Explorations on color, meaning and experience. And Michelle. Surely I can't offer an presentment on the concept of the implication of color , the symbolism, let alone the depth of experience that exists in the trade on color trending -- and the shifts, year to year, that captivate the market. Or anything other than…