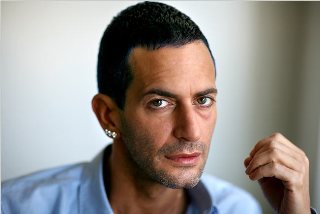 I’m wondering about the concept of attention. And the holding of things. How we hold something, how we hold attention. There’s something to memory and holding a concept in one’s mind. For many of us, for me, the idea of holding onto attention, paying attention, is a conscious act of focus. There was a woman from Microsoft that I connected with once who’d talked to me about the idea of attention, with a technology focus; her world was about how many devices there are and how do you pay attention to them all. Interesting question.

Then there are other forms of attention.

Marc Jacobs relishes, positively savors the idea of attention — the attention being paid to him. The point there is the idea that he feeds off the attention that the media, and the students of the Marc Jacobs brand push on him — and they are clearly relishing the personal, even emotional, story that Marc represents. A persistent bad boy, but a compelling designer, his state of being has been evolving, since the opening gestures to his Louis Vuitton collections setting off fireworks in the trade over the last several years. But those revelations come from a harder place, a darker world. He was personally challenged, overweight, drinking excessively, unhealthy, hardly daring to even look at himself in the mirror for the better part of two decades. And his design treatments captured some sense of that — more closely and buttoned down, covered up in a way that spoke of his personal containment, his personal life compressions. Eric Wilson, NYTimes notes:

“The vividly emotional reactions to his shows — the love it or hate it debates they have inspired — seem to have heightened Mr. Jacobs’s appetite to create, and court, more controversy, as if he is sticking his finger in the eye of fashion.”

And there was something that changed for Marc. He transformed himself, tuned his creativity. And of course there was a media holler about this new Marc Jacobs. That the new brand of Marc was actually more self-absorbed, more connected to him self, and less about the brand that he served. In a way, when you think about the others, like Lagerfeld, he’s serving a vision of a vision; his visioning, Coco’s brand dream. But he’s committed. He’s paying attention.

Marc? What’s he paying attention to?

But what is most captivating about his recent collections is that they are informed by all of the above. Mr. Jacobs is drawing from his own tabloid existence in creating clothes, as he did with his spring collection with underwear hanging out of undone dresses, that reflect the disjointedness and randomness of the contemporary culture of celebrity worship.

What I’m seeing is the concept of holding personal attention and focus on aligning the emotional character of design to the intimations that reach to the individual that creates them. One becomes emblematic of the other. One holds the other. The swirl and experiment that creates the whirl for one, does the same for the outreach of the creative energy for the collection. Whether it’s one phase or another. The psychic space of the attention, the holding, the containment — the vessel of the person –becomes the outflow of the other dimensions of the creative act.

Seems obvious, but harder to orchestrate and balance, in real life.

“In the most basic way I can say it,” he said, relighting a cigarette, “coming from a psychological place, what I love more than anything is attention. That is about as honest of a statement that I could possibly make. I want a reaction, because I want the attention.”
Marc Jacobs

http://www.amouage.com/ What's the story, what's the layering behind the fragrance, that leads to the story. Fanny Adams, Paris, tells this story. November is also a month to celebrate for Middle Eastern perfume company Amouage, which launches two new fragrances this month in honor of its 25th anniversary. Jubilation XXV and Jubilation 25 represent the new…

This is about identity, visualizing and animation -- and retail. And something I'd tried to do, but couldn't. And someone (WOW | Tokyo) that did. My story. Their story. ---- Last year, I'd worked on this idea of projecting this giant animation of an outgrowth of visual strategy -- and finally, the identity -- a…
We use cookies on our website to give you the best experience on our website. By clicking “Accept”, you consent to the use of ALL the cookies.
Do not sell my personal information.
Cookie SettingsAccept
Manage consent