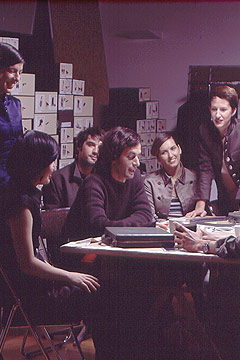 The key to influence is the street. Marc’s work is based on his ascent — and that’s telling. It tells the tales of his visioning, drawn from experience starting from the ground up. From his opening efforts at embroidering his own jeans, to flourishing at Parson’s design school, a stock roomer — to his early collections and opening designs for Charivari, the point has been about working the story from box boy to celebrated genius in his personal lines, as well as his stylistic leadership at Louis Vuitton. He grows, he goes. While he’s kept the lineage of design clean and modernist for LV, he’s been the one that’s introduced the concepts of divergence — the Sprouse graffiti bag or the Murakami collection of modernist, humored patterning; he’s got the eye that takes him from his clubbing daze at Area, to his street consciousness, his early and wide eyed exposures that lead him to the edge. People watch him, because of the depth of his story in design — and development; and that’s what it’s all about. His brand story is rich in that history — and his youthful promotional expansion on that experience — working the angles of visual storytelling that still captivates. His story is what really kicks that creative engine into gear. Continuously.

Hi and good morning. Starting off, after the absence of Labor...day. Welcome back! ---- Here's a story about a story. The thing that I believe in, personally, is that it's sometimes hard to imagine that small things really matter -- but they do. And in a way, sometimes we think that doing only big things…

When you look, you find. In working on a brand development project in eastern Washington, I was walking their vineyard to get, literally, the lay of the land. And, I'm looking for what lies beneath, what lies inside the brand story. And in any brand development, it's wholly about the heart -- the heart of…
We use cookies on our website to give you the best experience on our website. By clicking “Accept”, you consent to the use of ALL the cookies.
Do not sell my personal information.
Cookie SettingsAccept
Manage consent