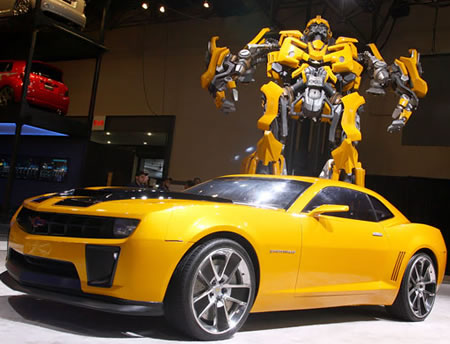 A brand that returns to the heart of design in the recollection of story.

In the midst of automobile industrial travails, bank ruptures and dreadful vistas for new car sales, the new G.M. Chevrolet Camaro “sex machine” is changing the tidal surges of affection and enthrallment. Who, in all the challenges — are seeking out new energy in a boring milieu of who cares, same olds and middle strategy industrial design?

A couple of months back G.M. sold nearly 9,500 Camaros. And it’s not all because of the appearance of a Camaro in Michael Bay’s Transformers (as a performer). Given that during the same time, there’s hope on the horizon for G.M. to emerge from the hole of financial collapse, the Camaro is one of few bright stars for stabilizing the organization rolling forward. 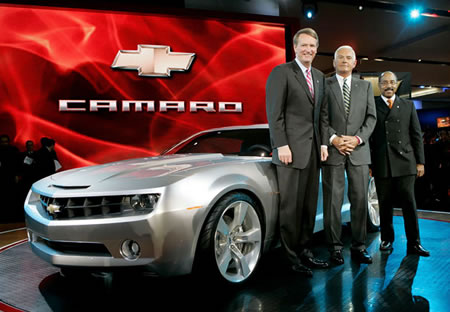 The CEO of G.M., Fritz Henderson, is placing that positioning at the top of the ladder, to build new marketing messages for G.M’s resurgence. 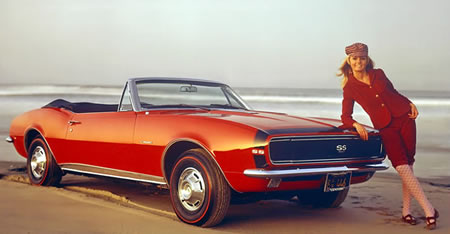 The point of any renaissance isn’t solely about the recollection of happy memory for retro-styling hot rodded horsepower of the 1960s — but, nonetheless, it’s true. The buzz is back. 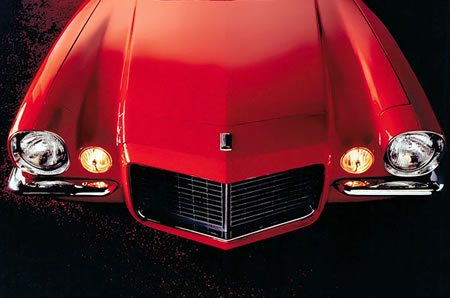 Joseph Phillippi, a principal consulting strategist for AutoTrends offers “You need excitement at G.M. — you need something new.” In what one might call a psychic turning back, 10,000 drivers are reaching back to the glory days of American car styling — a long streamlined hood, a rakishly styled grille, a buffed up structuring regales the look of past musculature — and the implied pyschic and physicality (sexuality) of the earlier brand image. 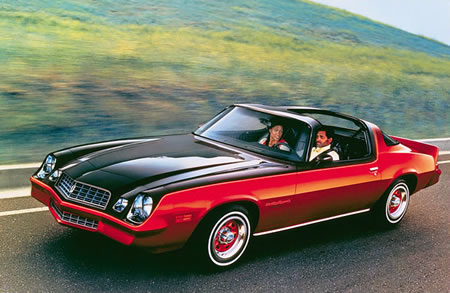 In this, I see the idea of there being an alignment between memory, brand, story and finally — design. That the heated tenor of the brand industrial design lends itself to re-collection, for a distinct demographic, priced to the mass channel of accessibility ($32,000. – for the boosted V-8). Last fall, Camaro was launched with advanced orders at $14K per) — this happened even before the first ones were manufactured. What that means is that consumers were relating to something that was seen, only in limited dimensions — and buying into the proposition (and the aspirations that existed in the psyche of the buyer). Chevrolet marketing executive, Karen K. Rafferty says that normal sales are bridged in units of six days for availability — for supply. 60 days is considered normal — and these days, most dealers are choking on unsold product on the lots. 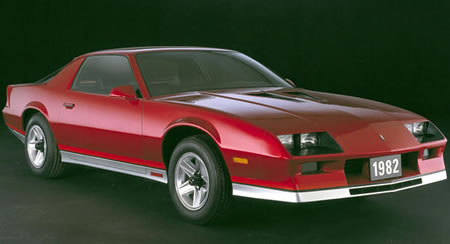 The leadership at Chevrolet offered that there is a halo effect — customers are being drawn to the buzz that’s happening around the Camaro. Rafferty offered, “the car is bringing in people to the showrooms — they’re looking at a Camaro, but they may end up buying a Traverse.

According to Dan Carney, “these “heritage” models have a spotty record…the New Beetle, Mini Cooper and Mustang” as real market hits and plenty of misses like “Chevrolet SS-R, Ford Thunderbird and Plymouth Prowler.” These were terrible to drive and live with — successful models have been great cars, well designed, recalling the legacy as faithful creations and better under the hood. He continues, “Chevrolet’s Camaro is poised for success because it’s both a stunning recollection of the ’69 Camaro and because it’s a fantastic car for driving enthusiasts. GM cut no corners in producing the Camaro, making it the most successful of the neo-classic pony cars so far. For the Camaro, GM made no compromises.”

There’s another layer to the return to the past — beyond Camaro. That is: competition. The year, 1974 would be the apex of — the final moment — for the street prowlers of Camaro, Challenger and Mustang — now, decades later, all have resurfaced. 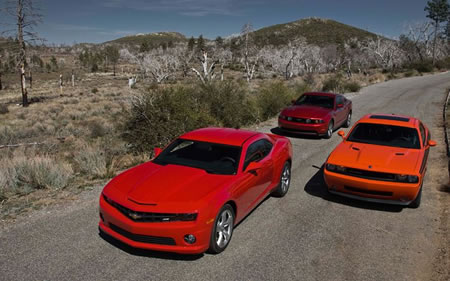 “America’s three trick ponies are back,” according to automotive writer, Arthur St. Antoine. “And they’re back big. Sure, the old cars looked cool and made lots of noise and got the girls, and some could even lay down a righteous longitudinal blast when the road arrowed straight. But none could match these current machines for blistering speed, cornering ability, braking power, driveability, reliability, and comfort.”

Actually, I’m less interested (personally) in cars as muscle-bound, road-burning sex machines and more compelled to study the reasoning why there’s a resurgence, especially given the potent and rational issues of earth-saving responsibility, gas consumption and surely, in everyone’s mind, saving money. Buying a car that can rip through the gas tank because it’s got the power to do it faster than most is hardly a financially sound decision. But making decision based only on the wallet is rarely the sole instinctual relational model. The story, the legacy, the memory — the epitomization of experience, even as aspirational virtues, are being re-crafted. And with everything else falling apart, that might just be the point. “Reach for that one thing that you can hold to, during the time of other emotional crises, that anchors the psychic memory.” And there’s something there, in cars. That would certainly be part of an American legacy, in the global opinion. Americans are crazy about their cars.

I would find myself linked in other anchors, but I’m not blogging about that here. Rather, if there’s a brand, that is finding renewal, but is based on some other historical framing, a brand story of the past, then there’s something deeper that’s creating that binding.

That would be the question. What is it?

The Duke Study on brand, imagination and the impression of self. It's been pointed out that seeing Apple's cool logo makes you feel more creative and smarter. And it's not only about that -- how you feel -- but how you act. That's an interesting proposition: in a collective spirit of self awareness, you're inclined…
We use cookies on our website to give you the best experience on our website. By clicking “Accept”, you consent to the use of ALL the cookies.
Do not sell my personal information.
Cookie SettingsAccept
Manage consent