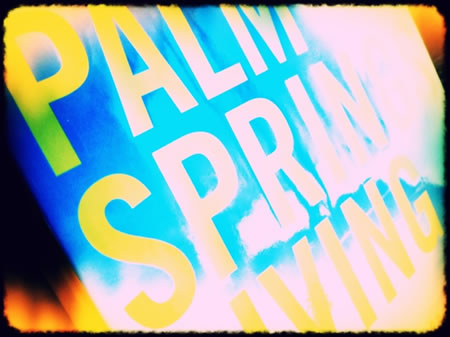 Designing in the otherworldly — futurism found and built — in the scarcity of the desert.

It might not be certain what the effect of the desert air, broad and brilliant skies, ranges of mountainous channels could be in the sentiments of design and architecture in the 30s to the 50s, Palm Springs — roughly an hour plus journey from Los Angeles. Being there, staying at a lodge that had these stylings (The Ace) it was worth it to head out and explore more. 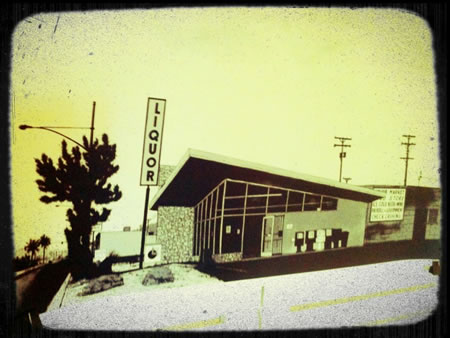 But the idea of desert modernism might really not have had its start in Palm Springs, or the desert. It might’ve even been part of the experience of military and technoscientific design strategies — putting architecture out in the place where there weren’t a lot of people. Inhospitable and challenging environments, dangerous places. And surely, the desert is a hazardous environment for the unprepared. The desert, too — is something of a testing ground; a research site for the out of the way, humanly remote, distant and protected; these are X-files kind of places.

In a way, it’s likely a combination — a personal place for something new, retelling one’s story, rethinking lives, stake a new territory for oneself psychically and physically — but there’s something otherworldly in the nature of a landscape that is altogether alien — dry, completely deserted flats of sandy and rocky land, covered with extremely peculiar plant life forms, the cactus and succulents and an expansively open-ended presence of sky. It’s big, bright, open and revealing. Brilliantly “bright” and clear.

What caught my eye, in wandering this landscape is the barrenness and remote quality of its geography — it’s not a human place, until there are things “built” on, or in, it. Designing places for humans to live there, extra-planetary or not, requires a kind of reinvention of thinking about what a “place” is. But Palm Springs and desert living is oftentimes about holistic reinvention — people remaking themselves in a new visage. To this day, you can see it — businessmen that become artistic wanderers and philosophers, conservatives retiring to a new “diversity,” health — and the recovery from illness are rampant [there are hospitals and rehab centers of unusual presence] or people that are living the Palm Springs life because it’s dryly hot — a super-warmed “coolness.”

Unlike the coastal watered meteorology of LA, or the chillier clime of Vegas — but still imbued with the strangeness of place — design in the desert. There is some of this sentience in the other Southwestern [Arizona, Nevada and New Mexico] framing of life, home style, the architecture of place. 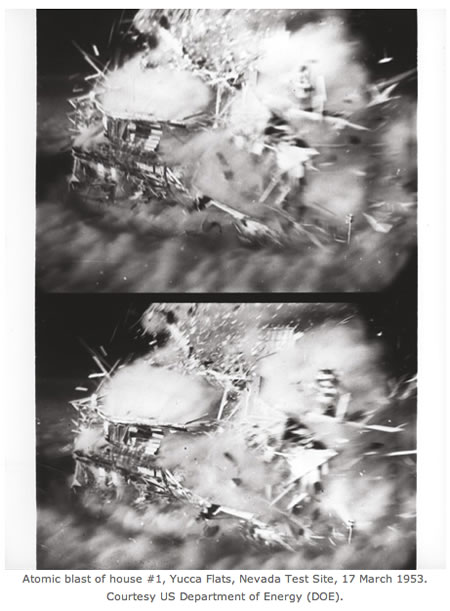 Pondering the technical survival in remote places — I contemplate the use of steel, concrete blocks, weird plant life installations, boulder implants, yards made of gravel, shielding walls and outer space design detailing. But there’s something “test site” like that I see in the modern structures — like little models that one might observe in the classic nuclear blast film showing the reflexive blast and suction implosion of everything in the path of the nuclear zone of rippled destruction.

Turns out, I’m not alone in this kind of otherworldly ideology about the openings of the futurism of the desert design — a land that is forever changed; it’s always been changed — and it might be just like the land after an apocalypse. Architectural theorist and anthropologist Joseph Masco (where the above and below images from the DOE are derived) offers —

“The contemporary American desert exists as (post)modernist frontier and sacrifice zone, simultaneously a fantasy playground where individuals move to reinvent themselves, and a technoscientific wasteland where the most dangerous projects of a militarized society are located. In the past century, the desert Southwest has become a space of vexed excitement, where the challenge of an expansive wilderness has been met by monumental efforts to dislocate its indigenous inhabitants, redirect its rivers, populate its interior with roads and cities, and fill its air with jet and missile contrails. In the phantasmagoria of the neon oasis, the wonder of the built environment is now offered up for intimate comparison with the natural world.” 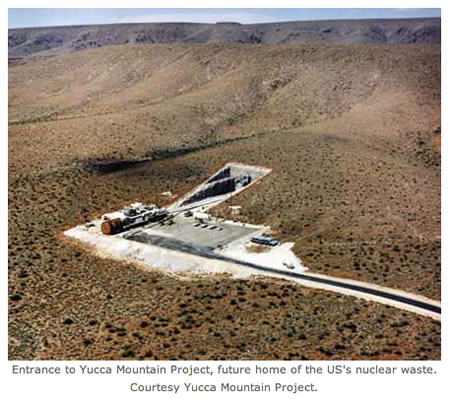 That idea of international modernism, to my take, fits right in with the superstructure and endurance strategies of military design — at once, fortress-like, self enclosed, purposefully contained to private views — aesthetically brutalist and disciplined; and at another, entirely based on the grace of the hard line. 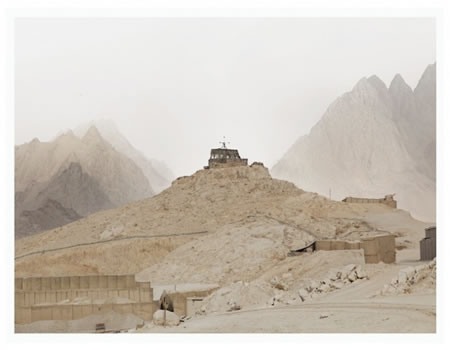 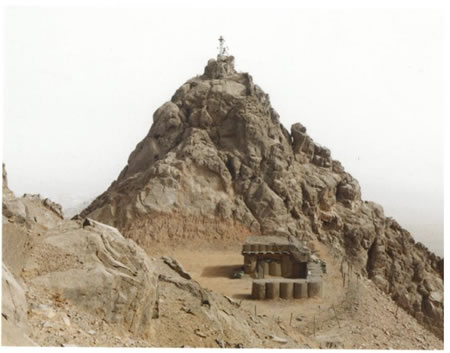 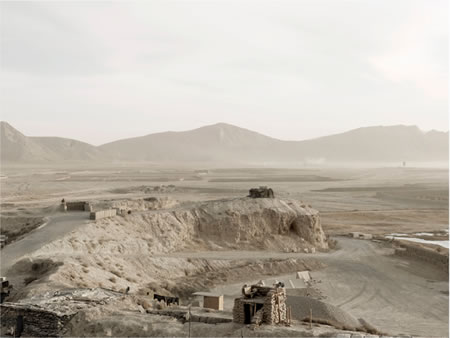 Modern, the defense, the desert.

But, the work in its own way is blast proof — but this idea might be more to a personal contemplation than the actual principles; it’s been pointed out by others that the notion of design in the desert is about newness and creating second homes that are accessibly priced, modular in thinking, component based and focused on the distinction of “communities” that are styled in similar notes and aesthetic sentiments.

What, to history? Perhaps slightly earlier, than envisioned:

1922 – R. M. Schindler designs first modern building in the desert: a cabin for Paul and Betty Popenoe in Coachella

1936 – La Plaza Shopping Center, designed by Harry Williams, introduced as one of the first car-oriented shopping centers in America

1946-47 – Neutra’s Kaufmann house, where photographer Julius Shulman would take one of his most famous photographs, built on West Vista Chino

Having grown up in a modern house — flat, angled roof, long angles, large plate glass expressions and the profusion of light, this thinking and modernist style is transported to other climes. Like Spokane Washington. My neighborhood was a block of modern styled houses — boxed structures and big windows, layered entry ways and slated fenced protective screens and divisions — and it was the founding ground of many designers and architects, living in that neighborhood. It’s how I grew up — and not that I ever chose to live in that type of house again, moving to more conventional structures, old Queen Anne style, early 20th century school houses and American cottage architecture – and the island studio, a kind of working Swedish coastal farm house structure. Going back to modern wasn’t a path I chose.

Still, the idea of out of this world futurism — googie style — was an interest; early teens, I was exposed to a sign maker and designer for one of the neon signing groups in eastern Washington that specialized in googie Jetson’s style design — everything was waved and bubbled, shot through with holed patterns and speed rules and radioactive spires with planetary rings. Not that I ever had a chance to apply that thinking to anything, still it was a vocabulary that I understood.

Being back there, driving the zones and communities of desert modernism, I recalled my childhood — growing up in light future house conceptions, the 50s, indescribably cool back then. Now — something to be experienced on an architectural tours.
Some notes, to experience and explore more:

The Architecture + Design Council of the Palm Springs Art Museum

As a concluding note, there was a chance meeting with a design luminary — master type designer and graphic legend Thomas Carnase. Decades back, during my opening portfolio carrying days in NYC, lodging temporarily down on 5th, between 2nd and 3rd Avenues, off Cooper Union — one of my early connections and inspirations was Herb Lubalin. Tom Carnase was a partner there, co-founder and early developer of the beginnings of digital fonts, working with Lubalin and team at the ITC Center. Exploring different houses, driving the neighborhoods, we came across two men talking. One younger, the other an older gentleman — they were pointing out, gesticulating to details. As we approached — “are you tourists?” We explained that we were designers, exploring…”what kind of design?” For Dawn A. Clark, AIA — the answer was architecture; me — strategy, branding, graphics. “Say that’s the line that I was in — I’m Tom Carnase.” Recognition mutually was fast. Tom’s story, here. Site, here. 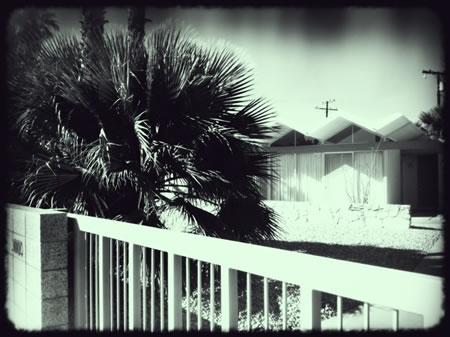 Some other studies and impressions of desert modernist architecture: 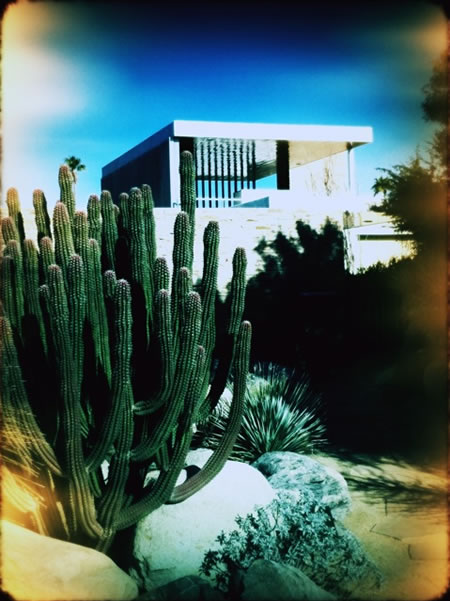 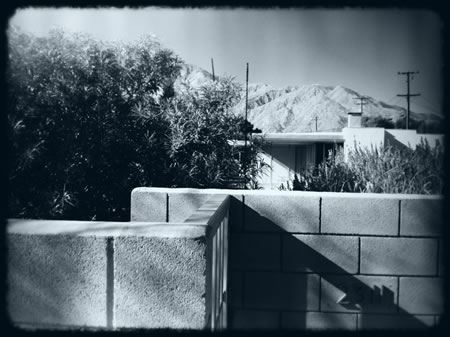 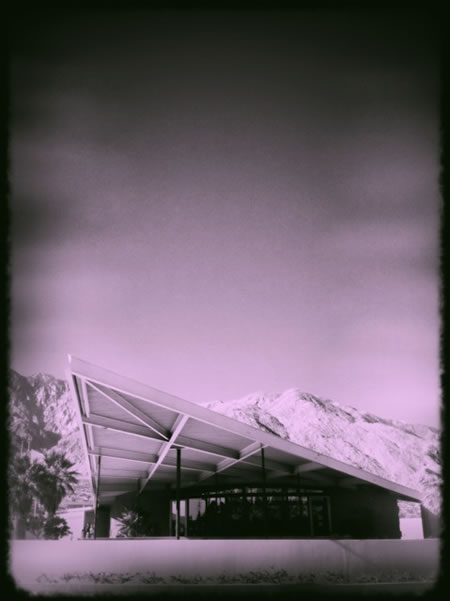 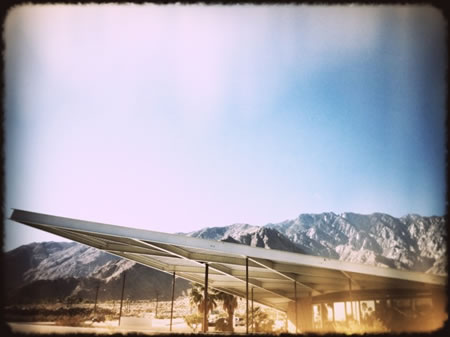 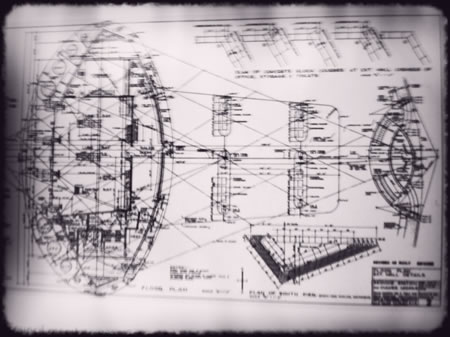 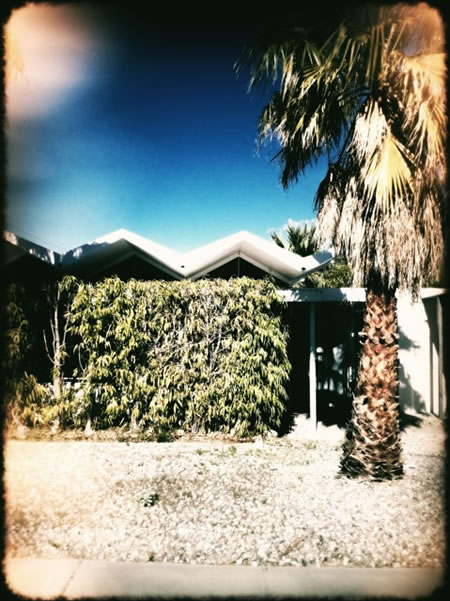 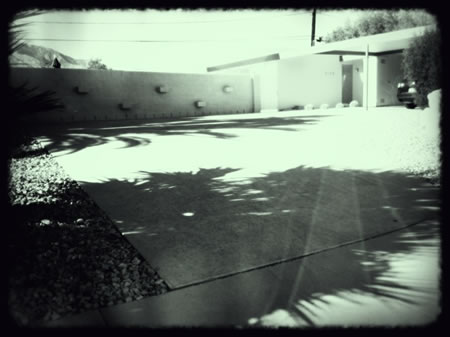 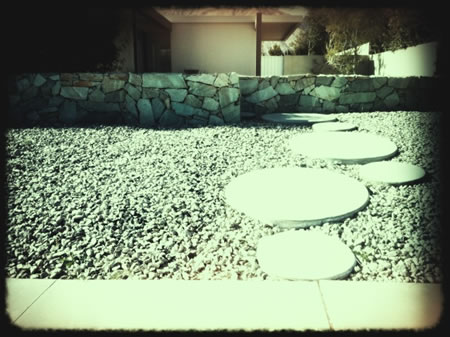 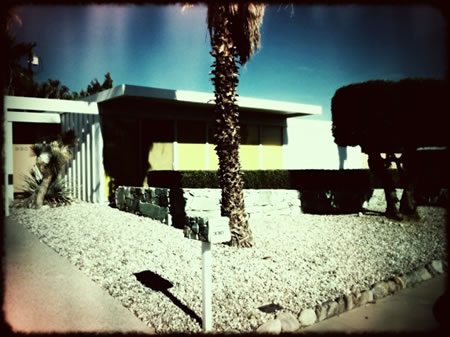 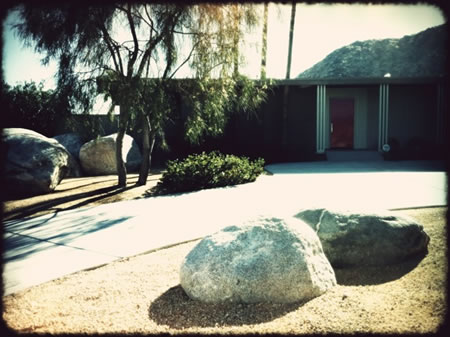 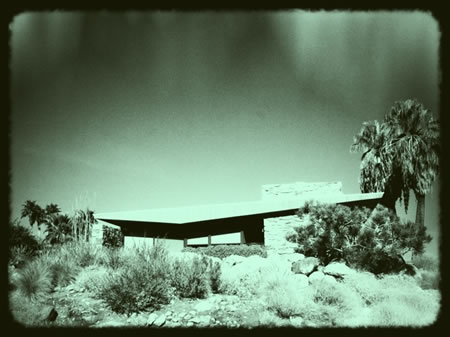 Obviously, there are dozens of studies, and entire neighborhoods of homes — noted above, to explore in learning more — I merely recount the otherworldly character of the design strategies — stark lines, hard details, flattened to the earth, populated with the strange survivalist plantings of the desert, popped in display in the front yard, strewn with boulders and gravel lawns.

I might comment that, in searching out the sense of the futuristic, modernism in the desert, the wind farms place a powerful stake in the ground, whirling up the energy of design, in place.

I embrace their enthusiasm.

THE RAVENOUS HUNGER| THE CREATIVE PREY

the creative hunger, the force of passionate making raven, verb i"m thinking about the hunger that is beneath the hunger. I'm talking less about food and more about the notion of the food beneath food -- that is, what drives the hunger itself? Emptiness? Or rather, fullness? When that comes to the creative place -- the place of making --…

There's a story about beautiful garbage, based on the idea of one person's -- a team -- visioning of a litter free place. That being -- an alley. In Seattle, the founder team came up with the notion of "dumpster free" alleys, by engaging community members in seeking a sorting approach, to building out that…
We use cookies on our website to give you the best experience on our website. By clicking “Accept”, you consent to the use of ALL the cookies.
Do not sell my personal information.
Cookie SettingsAccept
Manage consent