Possessed by an idea: mapping collaboration, sharing and the crowdsourcing of genius 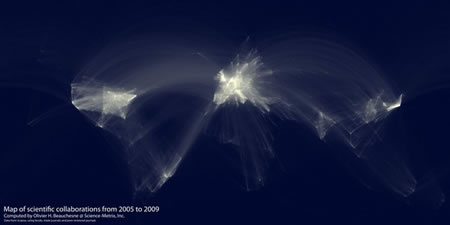 The flow of innovations and the interplay of minds.

There was an idea, an inspiration, and it was shared, and went from one to another, and another. Then the world knew.

It’s interesting that the idea of genius — the ancient nature of the word, maybe 5,000 years back — is “gen“: the foundation of generative, the generation — the begetting and production: the making. Genius, the bright light of the person, was the later Renaissance — mid 17th century. And genius is the sharing of mind, to minds.

I was thinking about some of the work we’ve been doing in the space of science — world-changing science — that needs a voice, needs to find its soul in telling the story of its opportunities in a way that people will understand.

Understanding is inter-standing, it’s being in a place of comprehending ideas and inspirations by being between them. Or, to the more ancient interpretation, standing at the fore(standing) of seeing between ideas. Standing in front.

Working with scientists is nearly always about being in front. Leading brand workshop and soul-finding missions with them is another. At the once, it’s precarious and risky territory; at the other, it’s utterly fascinating. Getting scientists synced with each other — then aligning their messaging and visualizations — can be either an encounter of fantastic import and marvelment, or a challenge of significant altitude.

One of the more interesting issues that we note — moving into the play of scientific thinking, and the branding that comes of that enterprise — lies in the spirit of collations between the ideas of scientists — and specifically how they collate, refer and connect with each other. But this process can be emotionally charged, as all good exploration entails — a kind of adventure of minds, connecting and exploring, pushing to the edge of how concepts and interpretations can reach new places of adhesion. This can take years. Tests. Trials. Experiments. Releases. More so, in the speed of accelerated experience and scientific evolution, it can be transitioning in mere months.

I’m curious about the power of aligning sparkling minds and how that works. In a recent session, leading a team of scientists in exploring the nature of their collective examinations and world-shifting work, the idea came to the soul of their experience — what they represent as individuals, and what they represent as a team. That emotionality is inherent in the power of how people work together. Getting the ideas on the table means being willing to bring out the doorways of the opening heart of furthering that commitment. Scientists generally have a passion of commitment that moves beyond the normal impassioned member of commercial enterprise: science can be lifework. Science can be years of working in a kind of race toward a solution that might be harbored and under development by countless others. It’s one thing to be a member of a committed brand team — yet scientists, like artists, can go deeper still.

That emotionality is the forefront of experience in the scientific mind, passion is loyalty to an effort beyond measure, yet it is the most challenging to express. Add that mean to the framing of messaging, and it’s all the more complex. This might be structured in a grouping of communications to business leaders, investors, government — as well other scientists. This might be ranged as well to the expression to community – and the audience at large. So the complexity of understanding moves from the nature of scientific engagement to embracement on multiple levels. Of course, all of this could be tuned and refined to each of the layers of the audience.

In sorting out team messages and expressions, goals, visions, promises and statements of direction, it becomes a layered floating world of seeing threads and alignments between one and the other — and the group holistically, then building that back to a messaging structure. From message — what does it look like?

That might be the question: in the realm of scientific collaboration — the humanity of multiple minds connecting to advance their own projects and then how they can be collectively aligned as a central thematic enchantment.

Considering the configurations, labyrinths, puzzlements, cartography of the misting shifts of ideas, it’s not about the idea of a single hard line, but multiple lines that become a kind of threading. What of mist? Translucency — in the threading of ideas, which is surely about light and the context of the beam.

Days ago, on another search mission on science, I came across the work of research analyst Olivier Beauchesne at Science-Metrix who, in studying the recently developed Facebook map by Paul Butler, built a similar map showing scientific collaborations around the world. Because of the nature of his organization, he had access to a similarly large database of scientific papers published between 2005 and 2009. Beauchesne created a veritable loom of connections between cities when two authors from different locations collaborated on a paper together. Then, using a similar method to that of Butler’s Facebook creation, Beauchesne crafted his own cartography. As in the Facebook spidering, the brighter lines indicate more scientific collaboration between cities. The world appears. Most of the partnerships Beauchesne found are connected among American and European researchers.

Closer in studies reveal the webbing of collaborative minds, in myriad strings of connections. 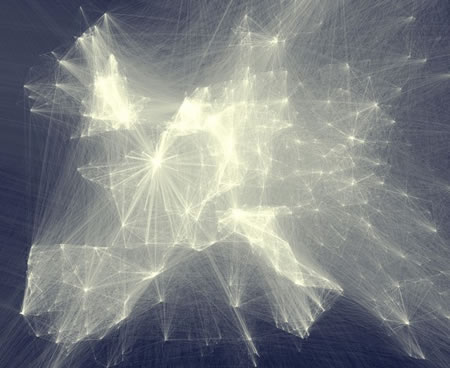 The US mapping reveals the geography of this grouping:

My employer, Science-Metrix, is bibliometric consulting firm. In other words, we engineer ways to measure the impact and growth of scientific discovery (and publications) in the world. To accomplish this, we license data from scientific journal aggregators like Elsevier’s Scopus and Thomson Reuter’s Web of Science. The data we have is bibliographic in nature. We don’t have the full text of the articles but rather citation networks, authors and their affiliations, abstracts, etc.”

What I find compelling is that the nature of collaboration – the spirit of people working together, in the highest scientific order, or the meeting of minds in one of Girvin’s brand workshops for a team of experiencers, the flow is light-filled, luminous, transparently elegant and capable of being visualized — even while you’re in the sessions, actually — in a manner that is lucent and powerful.

CONTEMPLATING THE SPACE OF INNOVATION: The workplace of newness, now.

The designed space of innovation, design labs, incubation works and architectural evolution. Over time, working around the world and linking into innovation environments, the idea of designing a working laboratory for innovation is something that ranges from raw warehouse space to funky office clustering. The laboratory for leading edge invention and creative innovations leaps from…

Starbucks logo: the design strategy of curvilinearity: does the softening curve attract touch?

Testing and response, does the arcing circular form suggest greater accessibility? "I'm soft, touch me -- more." Curves: more human, more lovable? There's a proposition (noted below) that the Asian populace relates more positively to curve on curvilinear design languages -- the radiant (and radiused) curvature of the newly-formed Starbucks siren. And better so, than…
We use cookies on our website to give you the best experience on our website. By clicking “Accept”, you consent to the use of ALL the cookies.
Do not sell my personal information.
Cookie SettingsAccept
Manage consent