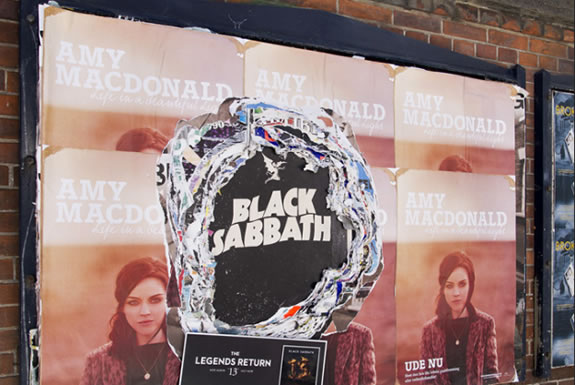 We’ve designed dozens of posters,
an earlier legacy of work.

But we love this Black Sabbath promotion,
pointed out by Daniela Walker and “DaBitch.”
As Daniela notes, “the advertisement, which appears to exist beneath reams of old advertisements that have been peeled away, is a clever promotion of their latest album 13, which recently entered at no. 1 on the Billboard’s Top 200 Charts. Although they may all be sexagenarians, the ad playfully shows they are aware of their longevity, but as other musical acts come and go, beneath it all, there will always be Sabbath.”

Who to thank?
McCann | Copenhagen

Working for galleries, we used to design posters for free. And exchange that designed craft for art. It might be said that, over time, a great deal of the art in Girvin’s archives [and on the walls] comes from trading design and art. I used to post those posters, as well. Sometimes even posting posters on top of old posters that we’d designed.
Rather than trying to take them down,
I simply posted over them. 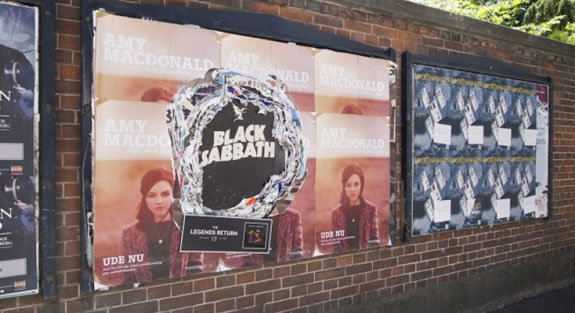 Hanging out on the subways of NYC, I saw this same archaeology — one idea, on another. It reminded me of the notion of palimpsest — the reuse of vellum, one text on another, scraped away and rescripted — what was left behind, shows through.
We played on this telling — brand, design, layering: The Evergreen State College, Macklemore.

Time goes on, weaving layers in the loom of experience, memory and how we tell them —
the stories of our lives.
Layers.

Are you a Lone Ranger?

In the Journey, who is your companion? Who is your guardian, your guide, your icon, your shepherding guide? Me? Raven and crow, telling. We've noted in an earlier blog study, that we've been involved in the Lone Ranger, as designers, in the past -- the current, lightly letter-spaced treatment of "Lone Ranger" isn't a Girvin…

NORDSTROM + GIRVIN | A HISTORY OF 35 YEARS

THE HAND CRAFT OF RETAIL DESIGN IN THE BEGINNING, RETAIL DESIGN GOES BACK TO ONE SIMPLE PROPOSITION. "WHY SHOULD I BUY FROM YOU?" The implications of retail speaks to retelling -- that is, there is a story, and another story, in a story -- and you either buy it, or you don't. Buying is holding…
We use cookies on our website to give you the best experience on our website. By clicking “Accept”, you consent to the use of ALL the cookies.
Do not sell my personal information.
Cookie SettingsAccept
Manage consent