I spoke to the Luxury Marketing Council about the concept of truth — authenticity — in the context of branding. It was more than that. It was also about the nature of the story, as part of the character of brand expression. It’s never just the story — alone. It’s just that the story can be a emotionally connecting entity in bridging the link between a business entity and the community which it hopes to serve. Stories are simply that. They connect strings of consciousness between what is known, shared and finally — held. 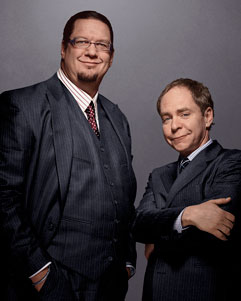 So here’s the story. When I went there, to set up for the talk, I saw two people there. One was Penn. The other was Teller. These two guys. Maybe you’ve heard of them. Seen them. Or heard them. I met both of them, before. I was a board member for the Seattle Theater Group; they came. I met them. They are extraordinarily intelligent — a wildly mapcap duo of magicians; but they are politically explosive. A liability to anyone attempting to hold office. I had a good chat with them. But this time, they weren’t in a very good mood. The security guard inquired of Mr. Teller — “so what’s your first name?” “I don’t have one, it’s Teller.” So the man filled out the card: Teller Teller. They went on their way. But I didn’t reconnect with them again. I watched them walk away, disgruntled — on their way. Teller Teller. What?

I’m thinking about holding things, in the arrangement of living. What do you hold? What’s something that ties you to an expression of experience? Your memory. And what do you remember about things? You recall that string of things that is part of your recollection; it’s the recollecting — the new gathering that is part of that experience. It’s what you remember that is what you hold. A vessel, you are. A vessel, can be. When you are exploring life, it’s about that string of culling from your times of living that allows you to venture backward to examine what’s past and what you can hold. Attention.

So this talk was about thinking about the nature of a business proposition and how attention can be directed to it. It can be just that — the idea of the story being part of a messaging plan that reaches to someone. One, or one million. But it doesn’t have to be one-sided; it’s a reflective character — one story becomes another story — one story reaches to one, then it reaches back. So in telling my story, there’s a sharing that is enclosing; it’s out, it’s gone — and it’s there from one to another. And back again.

There’s more to the story. It’s something about thinking like a person. Like a person. Right. The idea of considering brand as a kind of spherical proposition. It’s a circle. And it reaches around the person — and it is a enclosing vessel. A holding. Attention.

There’s the legacy in the center and the radiation that refers to the richness of how that experience can be crafted.

Here’s a model for visualization.

This reference to a sense of narrative in the story of Nordstrom, as a modeling. They’re just down the street from the Seattle office — the headquarters. And I did gather from Bruce Nordstrom the concept of the story that lies within that family. That the real story is about the customer at the top — and finally, the family as the foundation. But it all comes from the story. That’s where the people are. 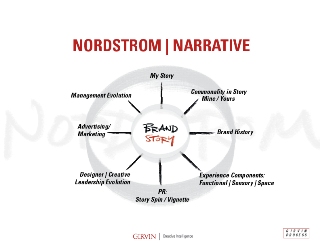 The modeling is not only circular, but linear in the spokes of the radial character of the experience. There’s the opening, the innovation of creative culture — the cult of expression; this attribute of genius, lends itself to the building of legend, of story; there’s a premise, which is the foundation of everything — it is the character of action or service. There is a promise that spills from this. And this becomes the reflective nature of the relationship. What the brand offers, therein is the potential of something being given back.

Here’s a gesture to another sequencing, another retailing empire, international in scope — Hèrmes. 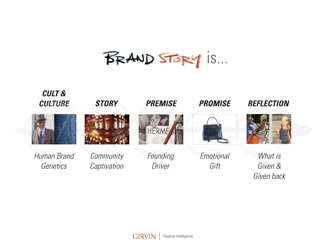 The founding family, the culture and the building of the cult; the authentic story and the captivation of community; the foundational driver of the premise of the business; what then, the promise — and the reflective gift.

For the closing gesture to this exploratory, the metaphor, like a wafted fragrance… the story spreads.

Tell them the story.

: expressing or of the nature of necessary truth or absolute certainty

See a map of “apodictic” in the Visual Thesaurus.

There’s something remarkable about a word which, when periodically dusted off, proves to have retained its freshness over 350 years — and that’s the case with “apodictic.” It’s a handy word that can describe a conclusive concept, a conclusive person, or even that conclusive person’s conclusive remarks. The best known close relative of “apodictic” is “paradigm” (“an outstandingly clear or typical example”); both words are built on Greek “deiknynai,” meaning “to show.” More distant relatives (from Latin “dicere,” a relative of “deiknynai” that means “to say”) include “diction,” “dictate,” “edict,” and “predict.” MerriamWebster.com

Luxury, Value & Money: The Emerging Challenges in the State of Luxury Products

What is holding? What is held? What is memory? What is valued? I gave a talk this past week to the Luxury Marketing Council in NYC, and this overview, in recollection, was about truth. Actually, it was about the weaving of truth in product portrayal. And it reaches deeper to the concept of the lineage…

Given some intriguing alignments, it's time to consider film in the context of luxury storytelling. And there are two present time movements that speak to this abrupt emergence. And there's a personal winding, to the concept of film making and luxury brand storytelling for me. Part of the space that I work in is motion…
We use cookies on our website to give you the best experience on our website. By clicking “Accept”, you consent to the use of ALL the cookies.
Do not sell my personal information.
Cookie SettingsAccept
Manage consent