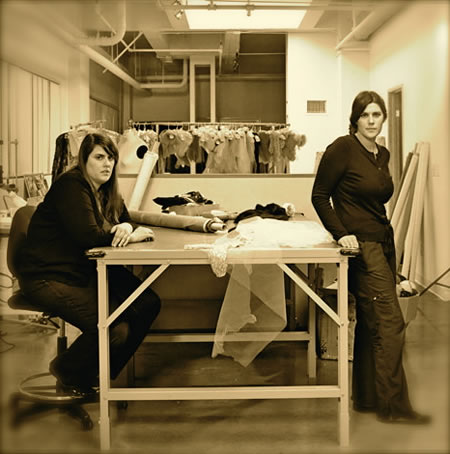 Sometime back, I’d sent a note to Kate + Laura, each with a painting on bark gathered from the high hills of Kaua’i, and a story to tell — that was to each of them, separately, and to both of them, together.

That started a correspondence about the idea of the work of design and creativity.

There’s a story in presence, and there is a telling in absence. And there’s another story in attention and intention.

The mysterious wonder of the two of them lies in that idea of attention (what are they are paying attention to;) and the intention that drives them there — (to see.) 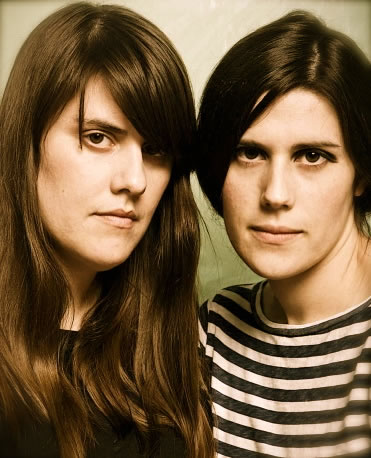 There has been some discussion about the inspirations of the Rodarte brand, and the inspirations that drive them (the Mulleavy sisters) to new dimensions of creative explorations. Seeing a discarded insulation stuffing, aluminum-layered, on the side of the road, lead to one disposition of fashion — that combination. To others that reveal themselves in similar offerings — something seen, in scene, that newly builds a fabulous creation that builds a feverish hunger by thousands. That idea of inspiration, the seeking of new ideas, is something that isn’t seen in the fad-driven interpretation of trend, but rather in the beginner’s mind of openness. Like the child’s sense of wide-open wonder and mystery, insights — seeing in — emerge in the impressions gathered. 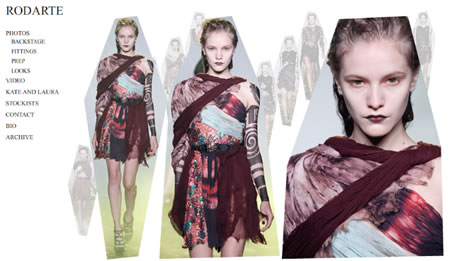 But the compelling link to the creative building of their ideas and expressions to the market come from a set of principles. They are modest, authentic, quiet, reclusive and comfortable in being self-contained in examining their world and the points of offerings that sparkle luminously in their intimations. Theirs is a world of attention — in focusing on seeking the grounds of inspiration — and intention, driving to an end. Making clothes. 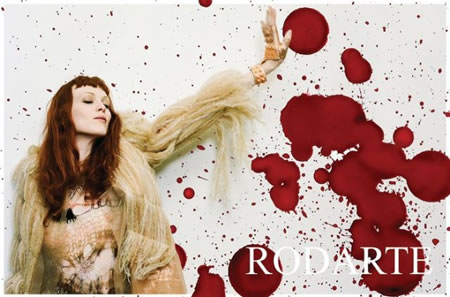 Attention and intention come from one ancient word: tenet.

So while on the one hand, I thought it was exquisite to see the pronouncement of the award stature offer by Michelle, going there to the news item — then I noted that neither of them attended. And why? Another principle. Family reasons, it was suggested. What kind of priority would suggest that being there would be more important than an acknowledgment by Michelle Obama? Family, perhaps, is more important. And in the string of litanies about the mysteries of the sisters’ work and the marvel of their inventiveness, this outcome could’ve been expected. It’s just not important — as other pressing intimations of personal priorities.

Surprise. But there’s a principle in play, I’d surmise. And that sticking to principle, the Rodarte tenet, is so profoundly admirable. It does come down to the passion of the work; rather than multiply the layering of accolades — and to further their promulgation — instead, it’s about the work. Is that sustainable? Surely, it is more so attached to the heart of making — living there is far more sustainable than the fluff of celebrity. Yet in this strategy, they flourish. That idea of sustainable character in the impassioned expansion of creative enterprise will keep them happy. And in all, that’s the most important contribution — to them, as well as their community — for them to focus on.

I was thinking about Michelle Obama, principle, the Rodarte sisters and the White House. A friend and client of mine, a survivor and a founder of a brand (Athena Water) that I helped her create, we’d reached to Michelle hoping to get her brand into the White House — given that all of our profits are given to women’s cancer research. Given that legacy, the Obama family and cancer, and survivorship — we’d hoped that this would be a good thing.

No bite. One principle, another.

The honor is one thing, the award, it’s a beautiful thing. And it’s another to think about the concept of attention – what you are seeking — and the intentionality of outcomes.

To the added nature of intention and the crossing mix of ideation and celebrity swirl, there’s the MAC collection that was founded on the Rodarte assembly for the fall expression, inspired by the border town, and the women, of Juarez — according to Thread|NY a fraught and risky subject. The designers gestured tribute to “its troubling complexities by making “sleepwalking” the primary focus of the collection, which tied together the early-rising factory workers and the overall dream-like nature of the area.” While building a design collection around a location with so many dark issues might not make sense to everyone, the Rodarte sisters didn’t become such respected designers — CFDA winners — by picking conventional threads of inspiration. The presentation of this collection was unforgettable according to anyone that saw the revelation — “eerie, trance-like, and breathtaking — a parade of pale-faced models wearing a mix of patchworked dresses and dreamy, tattered white lace dresses, giving the effect of ghostly brides.” Style.com intimated that the models could even be the “ghosts of drug wars.”

But still, the conceptions were likely — in the vein of attention and intention — were more authentically celebrative than linked to the slavish spirit of licensed commericalization — particularly in the context of their later alliance with MAC. See the work, Fall 2010, Cuidad Juarez, as documented by FirstView.com photographer Marcio Madeira:

To the realm of creative exploration, the Mulleavy sisters described their “long drive from El Paso to Marfa, Texas, which got them thinking they might like to explore their Mexican roots. From there, they became interested in the troubled border town of Ciudad Juárez; the hazy, dreamlike quality of the landscape there; and the maquiladora workers going to the factory in the middle of the night. And that, according to the designers, who certainly know how to romance a pitch, led to this conclusion: They’d build a collection off the idea of sleepwalking.”

To the nature of innocence, and storytelling context — and brand — MAC snatched at the chance to align with the premise of Rodarte creativity. They built on its impact, creating for fall a collaborative line of cosmetics. According to Laurel Pinson, “Unfortunately, it was in this leap that an artistic statement took a turn towards commercialization, and worse still MAC and Rodarte made the choice to market makeup like a nail polish called “Factory” and “Juarez” (a frosty pink). Naturally, critics pounced — the Frisky called it “tasteless,” pointing to the collaboration’s capitalization on the stuggles of young women in the area — and the resulting backlash against the line was so strong that MAC has since announced a plan to donate a portion of the proceeds to an as-yet-unnamed Juarez charity in an effort to thwart the angry tide.”

This is the latest iteration in a string of narrative and conceptual studies that while seemingly random, still captivate the wild realm of their imagination and compelling intrigue. As Style.com expresses it, the Rodarte sisters are inherently the very heart of the story: ” The fashion press loves a quirky backstory, and Kate and Laura Mulleavy had a doozy of one when they hit New York in the spring of 2005. Among other charming evidence of outsiderdom, the sisters were reported to operate out of a cottage behind their mother’s house in Pasadena, California. These self-taught creatures, the dispatches breathlessly implied, were naïfs who had simply taken their dress-the-dolly games to a radical extreme. (Never mind that both went to Berkeley, Kate studying art history, Laura English literature.)”

The challenge lies in the distinctions of the human spirit — the intentional character of the sisters’ work, their explorations and the licensing alignments that can go spectacularly well, or darkly sour. The real point might be the nature of the storytelling pitch and the possibilities of expanding the dream. Sometimes, in the milieu of trying to create sustenance, the nature of the spirit of art is best held — embraced — in that place: art in the place of art fullness. There’s always risk in any exploration. And to this added character, this is the place within the heart of the sisters that will sustain them. 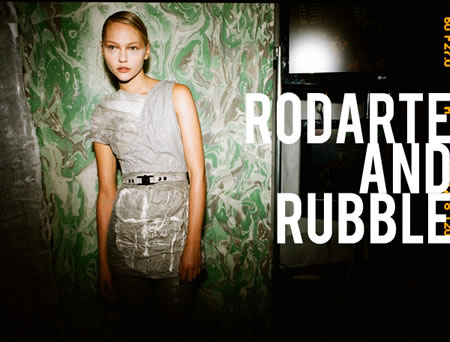 And it’s all mystery, in the tenet of discovering. That finding is what is the magic is: Rodarte.

EXPLORING THE PRESENCE: THE SENTIENT MIND OF SERGE LUTENS | SCENTEUR, ARTIST, DESIGNER, PERFUMER. Attention, craft, fascination and the making of an extraordinary career. Photo © Salons du Palais Royal Shiseido The concept of presence is about attention, capturing the spirit of the present moment, considering everything as an act of presentment and presentation. Being…

The Heart of the Human Brand: Design, Imagination and Beauty.

The Heart of the Human Brand: Design, Imagination and Beauty. Notes on the point of the work: urge, passion, craft, the hand-made brand -- a conference presentation in Portland. THE NEW WORLD OF DESIGN: what is the nature of personal reflection in branding? If there's a story, who's telling it, and who cares about it?…
We use cookies on our website to give you the best experience on our website. By clicking “Accept”, you consent to the use of ALL the cookies.
Do not sell my personal information.
Cookie SettingsAccept
Manage consent