SNOW WHITE AND THE HUNTSMAN

SNOW WHITE AND THE HUNTSMAN | Archetypes in storytelling, repetitive patterning in the mythic dimension 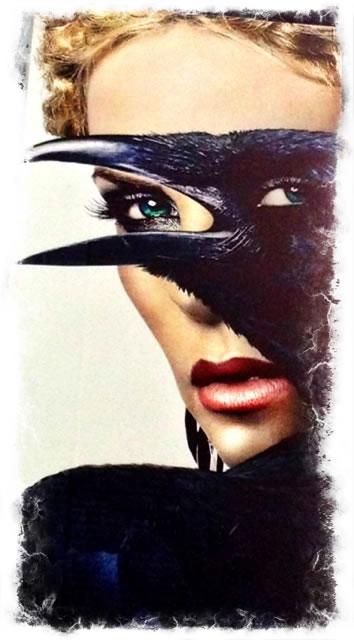 The question and the quest for the lineage of story patterning.

There is a story, in a story, in a story — and that story shall be told again.
INTERESTING is the search for patterning, to contemplate the metaphorical and archetypal character of Snow White, the Legend — she is the purely beautiful and life-giving, unfettered by self absorption — who, in being handed the bad Apple, by a dark, self-absorbed malevolence — this apple, a traditional symbol of sweet abundance, is instead a poisonous harbinger, and Snow White is transported psychically, and physically, to another realm — she’s transformed from a lustrous, giving and warming beauty to a condition near death — the deep sleep of the darkest dream.

When we talked and presented a theory on the alignment between brand and storytelling at Procter & Gamble, 15 years ago, our patterning study showed how plot follows a thread — the snapping line between the beginning of the story and its path, finally, the intertwining of multiple threads — the participants in the threading and interlacing of the content, and meaning of experience and the listening of the experiencer. That core threading is only part of the complications of the raiment of story — there are ups and downs, ins and outs, turns and meanderings and varying arrangements to how the players are played. But aside from the core meanders of adventure and misadventure, there are repeating patterns that are the recanting of long recited mythic stories and others that tell the story of the hero, the journeyer, the Creatrix and the mother — creation; and finally — the presence of a darker, shadowed side of sensation. There is the light, in a story, and there is the dark.

Snow White — the telling of purity, which is then poisoned — damaged and “discolored” — then made pure again, is about that sense of journey to the light, the warmth, the giving — and the journey to — and redemption from — the dark, recessive, the hidden and doom. That thematic expression is a big layer to the concept of story [and history]. Good and bad, positive and negative, the yes and the no — the plus and the minus — the whole and zero. One might study the nature of story as a sequencing of themes — larger patterns, and others that are more minuscule turnings. Of course, the story is inherently human, the narrative mind lies only in the province of humanity.

Drops of blood in the snow, pricked by a rose, “mirror, mirror — tell me the truth.” The Witch and bewitching, the Princess — the Hunter, the hunting, the Prey, the Captivation; the Cave the darker journey, the Castle, the Fortress — the Gate and the Portal.

Alex Williams, CD | GIRVINYC and I went to see that — Snow White and the Huntsman, close of day, beginning evening, yesterday.

While I am perpetually compelled by, and studying cinematic production design and shooting, lighting and lensing cinematography, I’m interested in mythic patterning in story lines — the strategic return of archetypal character profiles. In a manner, the story itself is an archetype — it’s a process of telling, that moves from one tier of mindfulness, to another which is more subconscious and dream bound.

I shot from the screen, while I was watching the film. Of course, ravens are depicted as accomplices to evil – in this instance – the bad and beautiful. Ravens, in a manner, are thematic symbols — tricksters, guides and portal surveyors to the path to death. While carrion eaters [just like esteemed birds such as the American standard bearer bald eagles] it is likely there is an association, long felt — with exceptionally smart black birds. Especially birds that appear to knowingly “observe.”

Some of these screen shots explore the patterning. As in life, there are larger movements, big cycles of mythical dimensions and archetypes and smaller, micro myths. 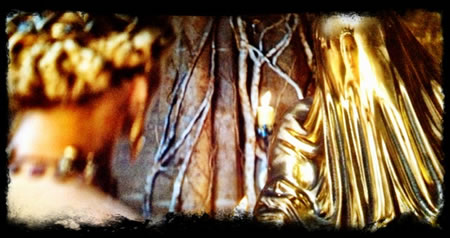 The journeyer — great adventures advance against the unknown, mass and spectacle — mountains, crags, caves, the wildness of the open sea, these are places that stir the imagination and build the fathomless odds of powerful trial — the journey of the hero of, as Joe Campbell called him, 1000 Faces.

The greatest journeys are the most unforgettable in all levels of experience. 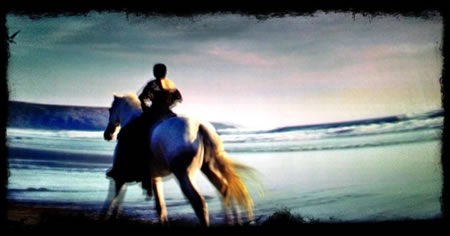 The watcher, the hidden hero — in this manner, a bowman — which is just as symbolic; the arrow is the object of focus that is hurled afar. Seeing close, shows the ringed ripples of the center of centers, the target that is the heart of the courageous. The most courageous are the most “heart-full.” 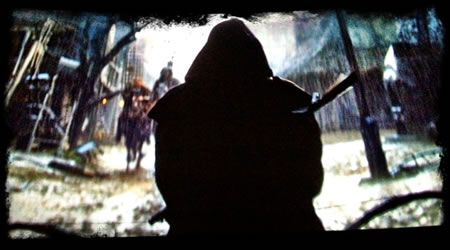 The dark forest — a journeyer here is a life path — full of roots, deep into the earth [the unconscious] and above, the complications of life. The way of living is full of strange paths, twists and turns, tendrils and thorns. One can get “lost” easily. The path is full of change, seeing the path will be one of tuning into the earth, what lies beneath. 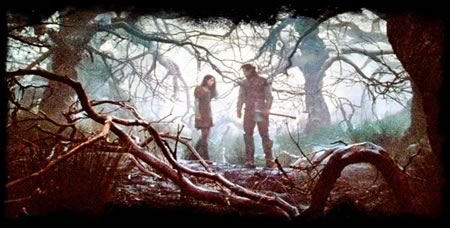 The troll is a guardian of passage, in this instance, the troll is not only the guardian of the bridge but is the bridge as well. The bridge is a passage, a story that moves across and over something, many times, a river or impassable chasm — but crossing any passage there will be a toll, and potentially a guardian or collector. Difficulty is inherent in the passage, the toll is the challenge that will be paid. 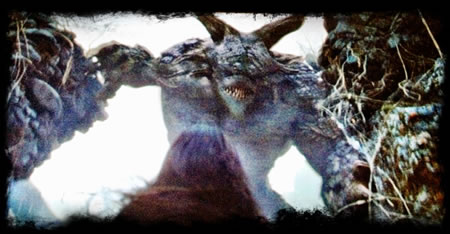 The tree that bridges the zones between heaven and hell. The Nordic mythologies called this “yggdrasill” the world tree — yet this is a mythic theme that can be found in many cultures; even the Christmas tree [of lights] has this symbolism, these lights being stars. 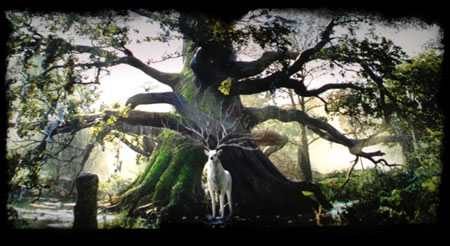 The embodiment of darkness can be found in many forms, evidenced in many ways. Ravens, being black and intelligent and preternaturally attuned, gifted and knowing. So their presence here illustrates the ideal counterpart, the counter position to the goodness of the princess, the Snow White — a striking contrast to the blackest of black birds, the Raven. 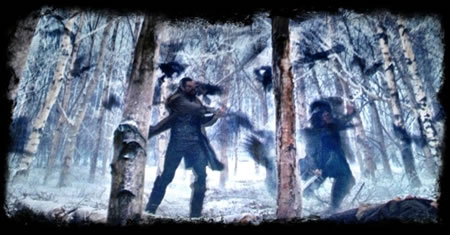 The Fortress is the prison of secrets, impenetrable and foreboding; place is an embodiment — the nature of place in story and myth is that everything can be held there. Holding is embracement — those that hold, make the story their own.

The mirror tells all – truth comes from the clarity of its reflection — it speaks, calls forth and it might be not what is hoped for. Classically, the mirror, a polished metal or stone surface, possibly with a liquid to enhance the reflection is a well, a deep pool to see into — it goes in, and deeply as far as the viewer can see — in, and behind the sight. The mirror, too, is a teller of time and its passage as revealed in the change of things. 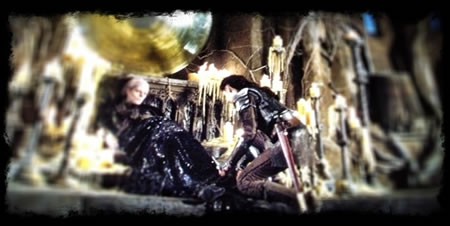 The story, in the patterning of the mythic underlayment, can be something, a telling — an evocation, in which we see ourselves. And learnings can be had. There are stories on stories, a story in a story, and a pattern of micro-tales.

The Mythic Journey;
The Hero’s Quest;
The Creativity of the Mother.
The good.
The un-good.

During college, in my study of and communication with, Professor Joseph Campbell, as well as writing and notes to Mircea Eliade, studies of the writings of Erich Neumann, and Ananda Coomaraswamy, I learned more about these patternings, as well as legend stories in the Sufi tradition with Idries Shah, London — further bolstered, in focused intentionality along with my mother, Lila Girvin, painter, pianist, and a long standing student in the C.G. Jung Study Group — the deeper mystery of why, and how, humankind shares tales of the journey, exemplifies the interpretations and wisdom of passage.

Are you watching passage, passing by, through, beyond — or seeking entry?

To each, their own. 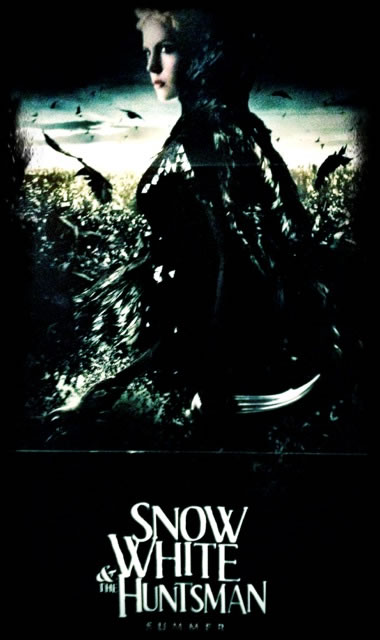 The fable, the parable, the stories for children — each have a lesson, that might’ve told in millions of ways, in hundreds of forms, over thousands of years.

And your story has surely already begun.

THE AUTHENTICITY OF THE TRUE Real people, real brands, enterprises that are true. Have you been with someone, a person, a brand, that's untrue -- to you? You had an impression, then you went to "meet" them, work with them, buy from them -- and they're we're untrue, to word, story carried? It would be…

WHO ARE YOU, ANYWAY?

A KEY START, TO ANY DEFINITION OF SELF, BRAND, ENTERPRISE, DIRECTION. The Quest for brand stance and conditioning. In my office, at the corner of 2nd Avenue and Stewart, Seattle -- on the wall, a sign poses the simplistically profound question: "Who are you, anyway?" Who you are is everything about you. It's the whole…
We use cookies on our website to give you the best experience on our website. By clicking “Accept”, you consent to the use of ALL the cookies.
Do not sell my personal information.
Cookie SettingsAccept
Manage consent