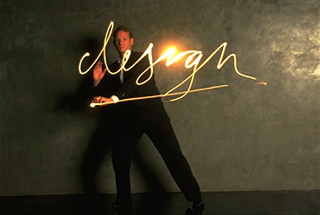 I realized that the branding visualizations that Sprint’s been doing with conductor-like expressions of people moving things, ideas, teams, etc., with light, was strangely reminiscent of something in my mind — not sure what, but it’s there. Something.

And what I’d realized was my own earlier experiments with the idea of shooting light in gesture. This could surely be elaborated upon, or improved, dramatically. But I’ve not really had the chance to even visualize this in my mind until Deanna Carroll, from our offices in Seattle, found this one lone image. I know that there are others, but I can’t find them. John Gallone, who’s long since moved to Portland and other dreams and aspirations, and I, along with Brian Mathis, now back at The Evergreen State College, experimented with this idea. Using a light device, drawing either backwards or flipping the imagery to get the effect of something, literally, being lit with motion and light.

I remember it well.

I’d like to do that again. I’m sure I could do it better.

The cartography of language and meaning

Visual Thesaurus visualizations, brand development and GIRVIN. ---- As a designer, and someone that works in the space of branding and the human character of business communications, writing plays a significant role. Moreover, there's the issue of how people understand things -- and any brand, ultimately is driven by two things, one -- the spirit…

Hi and good morning. Starting off, after the absence of Labor...day. Welcome back! ---- Here's a story about a story. The thing that I believe in, personally, is that it's sometimes hard to imagine that small things really matter -- but they do. And in a way, sometimes we think that doing only big things…
We use cookies on our website to give you the best experience on our website. By clicking “Accept”, you consent to the use of ALL the cookies.
Do not sell my personal information.
Cookie SettingsAccept
Manage consent