Starbuck’s New Truth, Told on the Outside of a Burlap Bag 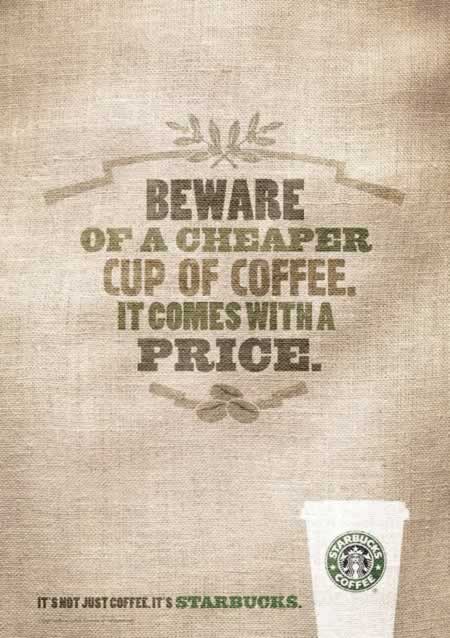 There’s a new campaign, popping on Sunday and here’s the sneak peek, referencing Howard Schultz’s intonations — along with some other Starbuckian baristas, offering their opening insights and meditations on the campaign. Diane Daggatt, friend and $ counselor offered her usual alerts — and with it, this reach to a Starbucks announcement.

The character of the message is intriguing — “we’re more than coffee, and we’re more than price — and if you’re concerned about price, and you’re in Starbucks, are you really in the right place, we don’t compromise and neither should you”, or something to that effect.

As a person that goes to Starbucks with frequency, have numerous friends that work there — or have worked there — have had conversations with Howard (and the heart and soul of Starbucks), and with many of the other luminaries in design and creative development there (like Arthur Rubinfeld, Harry Roberts, Tim Pfeiffer, etc.) I can offer a certain expertise in the analyses of Starbuck’s experience. And the design of it.

I might offer, in this, that the concept of the advertising could bridge to the concepts of merchandising — and Rubinfeld’s new concept prototypes — and Tim Pfeiffer’s evolution of these retail layered, thematic installations. If you look here, you can find more on that front.

But the new campaign gestures to a cross between the modeling of truth — as Starbucks holds their positioning, and the rougher sensate textured touch of the bags that it comes in. It’s a cross between the Nordstrom notion of repetition in service, to get things right, and then, of course, if it’s still not right, are you really where you think you are. The reality being up to question. 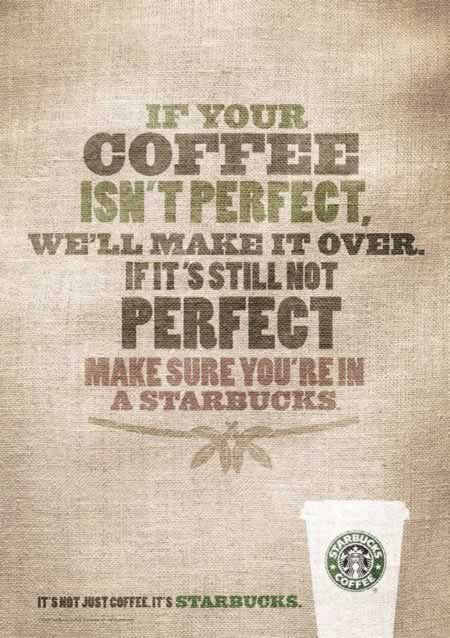 Part of the campaign reaches, as well, to the longest shadow, that coming from Howard — and there’s no question of Howard’s commitment (“he’d better make it right, for cryin’ out loud,” some friends — as stockholders — have said!)

And there might be a closing positioning here, slightly argumentative, somewhat combative, nearly — if you don’t like it, then perhaps you’re the bad aftertaste. What my sentiment here is that the concept is either you’re in the tribe or you’re out — you’re into Starbucks, or you’d better check the reality about whether you fit it, after all.

I wonder, are you compromising your self — and not fitting in? Can you fit in, therefore, and not be compromised? There’s a point there, to any call — and that’s the word itself. Compromise is about a joint decision — your promise, conjoined with another:

Are you with the promise, or are you not? And who’s promise?

promise (n.)
c.1400, from L. promissum “a promise,” noun use of neuter pp. of promittere “send forth, foretell, promise,” from pro- “before” + mittere “to put, send” (see mission). The ground sense is “declaration made about the future, about some act to be done or not done.” The verb is attested from c.1420. Promised land (1538) is a ref. to the land of Canaan promised to Abraham and his progeny (Heb. xi.9, etc.; Gk. ten ges tes epangelias). Promising “showing signs of future excellence” is from 1601.

Sure, I care what you have to say. I've been thinking about storms. Mostly because I thrive on storms. When a storm comes, I savor it. I relish the word, the nature of it - the overwhelming presence of the concept of the storm -- and, of course, the scent of it. Like you, I'm…

Seattle Theatre Group's Celebration of the Arts, in a Newly Defined Event Modeling: Doorways for everyone. During these times, the present financial travails, there are challenges to virtually every institution -- regardless of the scale, the import of their funding, or their export of their assets to support other groups. I'm talking about humanitarian foundations,…
We use cookies on our website to give you the best experience on our website. By clicking “Accept”, you consent to the use of ALL the cookies.
Do not sell my personal information.
Cookie SettingsAccept
Manage consent