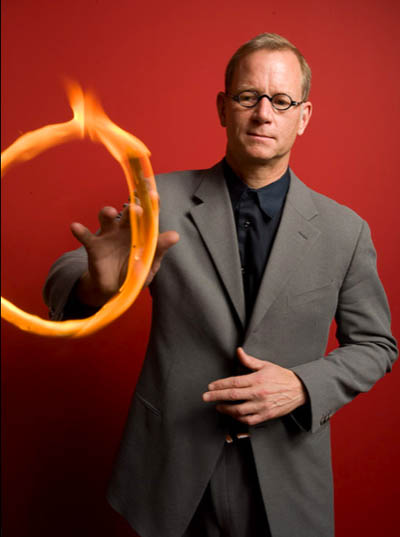 Firescript: the hand, the drawing, the gesture and a legacy.

I’ve got history on the concept of the tablet. Friends of mine, running hardware design at Microsoft – I told them – what about the idea of showing the art of what this hardware could be? What can, what could, it do?

No go. But that never came to pass — it was abandoned nearly as quickly as the hardware dropped out of sight, off the table. That was then, this was later.

To the revelation of the new Apple Tablet conception, it might be said that this is nothing new. Like any technology evolution, genius takes root in a succession of plantings. Some flourish. Under the realm of a certain leader and the evolving structuring of that visioning, things seem to come to light and hold their strength under continuing scrutiny.

As I’ve often intoned, there’s a brilliance that continues to shine. Steve Jobs, luminosity. Steve Jobs vibration. Like any good brand (story) the rippling starts in the center — what happens there, ripples out as one continuously quivering vibration, that’s either a very good thing, in transition, or — in a contrary action — can be very negative.

The whole point of my connection with Steve Jobs starts with the link between the movement of the hand and what is perceived on screen. The centering to the proposition in the beginning for me was about the gestural fragments of the mind in memory, the calligraphy of imagination. That was the mouse. The original cursor, hand tool and screen interface. “Does it work?” was his query to me. That idea was evolved, as a discussion, at Next, then to years of work on the Worldwide Developer’s Conferences that we acted as designers and integrators on for all marketing and visualizations, Apple product merchandising, Internet Live! and kid products we innovated. As well, we worked on product and application alliances to Apple. And some bridges to Pixar. 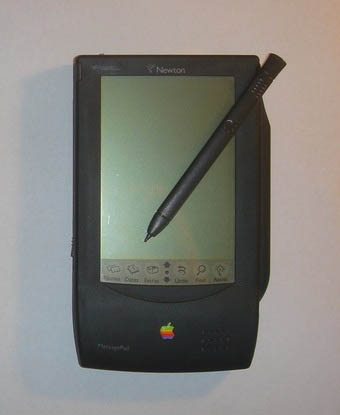 The concept of the newly presented tablet, of course, is Newton. Great ideas start — somewhere! A vintage pronouncement offers, dated September 23, 1993, is remarkable for how forward-thinking it was – except it’s clear now, more than 16 years later, that the Newton isn’t the ancestor of a tablet as we currently conceive of it. The Newton was the pre-iPhone. An extracted quotation offers:
The operating system is “communication enabled,” which means, in theory, that all data can be faxed, e-mailed, beamed via infrared or sent to a desktop computer or printer. It is also ready for voice, video and other advanced technologies if or when they become available.
The possibilities are grand. For example, one can imagine cellular phone circuitry being shrunk to fit in the Message Pad’s credit-card-sized PCMCIA slot, or a Newton being shrunk to fit in a cellular phone.
“One can imagine” indeed. It only took 14 years for the Newton to be shrunk into a mobile phone. And the iPhone is the precursor to the new tablet hardware. The real hope, to yesterday’s opening reviews is that Mr. Jobs’ new offering would right the off-balanced proposition that many in the music industry blamed on Apple’s iTunes. Apple became the most important (and most powerful) distributor of music by imposing its own will on the music labels, bullying them into supporting Apple’s pricing and other terms. Apple sold lots of music. Meanwhile, the music labels claimed that iTunes had destroyed the concept of the album and damaged their already deteriorating bottom lines. My sense might be their own absence of resilience failed to serve them. 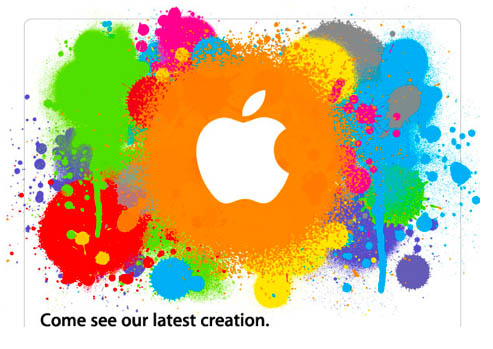 The notation on the arrival of the tablet might presage a new positioning in commerce modeling, with another sequence of similar pricing restrictions and sacrificing their direct potential relationships with customers to Apple.
Technology and media industries are looking at the brighter side of the horizon line. According to the New York Times overview, “Steve believes in old media companies and wants them to do well,” said a person who has seen the device and is familiar with Apple’s marketing plan for it, but who did not want to be named because talking about it might alienate him from the company. “He believes democracy is hinged on a free press and that depends on there being a professional press.”
During the earlier days of runs to Cupertino, San Francisco, Mountain View, was another company Girvin worked for — Electronic Arts, creating packaging, merchandising, trade shows and product innovation branding. The EA’s innovator and founder offered that the iPhone was a kind of harbinger for what might come. That founder, Trip Hawkins, now chief executive of Digital Chocolate, which makes games for cellphones, comments that “When you have a device that is this convenient and fun for consumers to use, you can get a lot more people interested in paying for and engaging with the content. Big media companies should be all over this like a cheap suit.”
Indeed, they already are — plays are in movement. The New York Times Company, for example, is developing a version of its newspaper for the tablet. “Apple upended the smartphone market with the introduction of the iPhone, and it’s likely that they will, if they enter the tablet market, lead the pace there,” said Thomas J. Wallace, editorial director of Condé Nast. He said that “2010 is going to be the year of the tablet, and we feel we are in a very good position for it.” 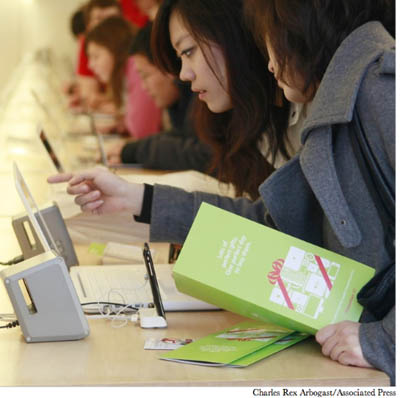 That positioning is a tempting offer: a hotly-anticipated device made by a wildly successful company that promises another revenue stream for their existing content.
•    For app and game developers, that means a new platform for their apps on the iPhone and iPod touch.
•    For newspaper, magazine and book publishers, a new way to publish content.
•    For record companies, film studios and broadcast corporations, another more purpose-built device with which to distribute content.
Apple’s proposed bargain with the devil deal: let us sell your content by our rules — including setting prices — and we’ll help make you a bundle of money. Your popular content will bring us the sales, our hardware sales bring you the eyeballs, for less cost than ever before. (Printing presses? Ha!)
The proof is the legacy of their strategy: Apple already owns 70 percent market share in the portable media player market thanks to its iPod lineage. While the shuffle, nano and classic haven’t shown much growth, the app-friendly iPod touch has shown 55 percent year-over-year growth.
A continuous fascination, a spell binding signature — the link between the book, the hand, the memory and action — whether paper or screen, what drawing made? The gesture spins what content? The book held, offers what imagining?
A sense of unfolding richness, today, will be interesting to listen to in San Francisco. I’m heading there in an hour.
….
Brands | love | motion pictures
New York City + Seattle | Tokyo

Art on streetscape | holding construction and the impending quietude in the wait for financing Still, most people are waiting for financing; that is, the banks, while mostly funded back in government bailouts, repaid in context, other major projects are sitting and waiting; developers, people, are hungry to roll. Girvin was curious about what to…

A series on Human Brand | defining the inextricable link between people, founding vision and the brands that they produce. I've swung in and out of Vogue, with minimal amounts of work to do -- precisely from a professional standpoint -- with the magazine for decades. Meetings, portfolio showings, pursuit of projects. But there were…
We use cookies on our website to give you the best experience on our website. By clicking “Accept”, you consent to the use of ALL the cookies.
Do not sell my personal information.
Cookie SettingsAccept
Manage consent