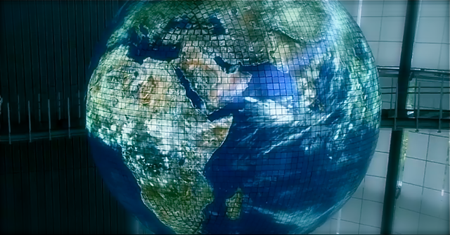 Working the World: Innovations and Revelations, the Future Reclaimed

Working in varying parts of the world, depending on the culture,  your relationships there invariably offer to show you the newest and the coolest in town. Being the contrarian, I’d rather go for the oldest. But one does get around to studying what’s emerging in the newest art / theater and productions / architectural / industrial design / lighting, electronics, cp goods / interiors and experiences. One might think of innovations as gathered around  these channels as merely ways of studying, in any city, what’s happening.

• Art is invariably at the head of innovation, examining the art scene, big or small, is where risk and personal exposure become the most intimate. Art can be an index to vitality; lively cultural environments tend to be more about invention and expansion beyond the known field.

• Architecture is holistically spherical innovation, the story relates to a bigger telling of exposure; it’s never about the architectural visioning alone, it extends to teams of talent that build the solution — and therefore, the innovation is an interlacement conjoined, collaborative and marvel-making.

• Industrial design, the engineering of touch — is another tier that can expand a range of experiential innovation fronts. On a visit, harder to find unless you reach to the studios, design galleries. I study in advance, then go there, connect directly.

• The lighting of things, there can be a journey that is about uncovering the secret of lighting places, interiors, buildings, parks, streets, sculpture, entertainments — the intrigue of that journey is that it’s not merely about the night. Lighting as a design and innovation proposition can be “how things are seen.”

• Electronics and consumer goods, I’d align these together — it’s a huge category of innovation, but similarly resonant to each other. Clearly, there are a huge variety of electronic devices — and when it comes to consumer product innovation, they might diverge and converge in a sine wave of movements of complex interweaving.

Searching for innovations there is a foundational requirement, as a design traveler, blogger, theorist, practitioner, and is it that you’ve got to get out there. See things, first hand — and I’m sure that there are many others that have experienced, and do travel internationally, far more than I do.

What I was examining, in the opening to this innovation observation — is that in experiencing wonders and spectacle in fabulous inventive trend and transitions, how often that might be presaged in cinematic evocation — the voice of story and film. A great deal — written about that. Films as the concrete of innovation. What marveled theory has been defined in a motion picture first? It might be said that even mere ideas, political positioning, strides in attitude could be influenced by the idea of film acting as a kind of testing ground, a bedrock of ideation that can lend itself to retelling: truth, later.

Working in the realm of motion picture advertising, identity and theatrical design, what one finds is that the level and strength of the production values pushes over-the-top the complexity of nearly all of the categories noted above. Working with Scott Chambliss and the J.J. Abrams team on Star Trek, was more like working in an architectural and industrial design office than the lot of Paramount Studios. Same too in dozens of other projects and productions, where the building of an imaginary world was comprehensively detailed. Early on, this scenario found its opening seedling for me.

In the early 80s, there was rumor round about a Philip K. Dick reinterpretation by a young, but experienced commercial director from London, Ridley Scott. I had already some connection with his brother, Tony Scott, but live meetings were distant — LA was a long way away. And expensive for me, as a startup young designer. But I’d seen some of the concept drawings for the filmic work underway, working the streets in LA. That idea of street wisdom, interestingly enough, was the jolt that began the connection for this overview. 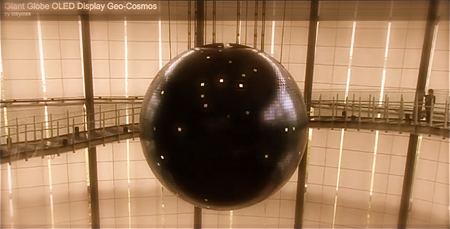 A month back, (June 2011) there was an announcement about the Tokyo National Museum of Emerging Science and Innovation, displaying Mitsubishi Electric’s “Geo-Cosmos,” what’s been called the world’s first large scale, applied spherical OLED. According to TokyoTek’s overview, the “gigantic globe features 10,362 OLED panels covering an aluminum sphere hanging 42′ from the floor. The 18′ orb is an upgrade to a previous model which featured regular LED panels — OLED boasts a resolution roughly 10 times greater than LED, with more than 10 million pixels. Seeing the video launch of the technology immediately reminded me of Scott’s Blade Runner (1982). 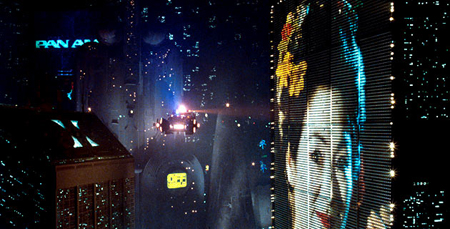 While the globe was installed to celebrate the 10th anniversary of the museum, founded on the desires of Executive Director Mamoru Mohri “wanting to share with people the sight of our beautiful Earth as seen from space,” what it reminded me of was the visioning of LA, 2019. Janet Maslin, of the NY Times, was among some of the early disbelievers, in her assessment of the filmmaker’s “view of the future offered by Ridley Scott’s muddled yet mesmerizing ”Blade Runner” is as intricately detailed as anything a science-fiction film has yet envisioned.” She continues later with the downbeat review, offering “Science-fiction devotees may find ”Blade Runner” a wonderfully meticulous movie and marvel at the comprehensiveness of its vision. Even those without a taste for gadgetry cannot fail to appreciate the degree of effort that has gone into constructing a film so ambitious and idiosyncratic. The special effects are by Douglas Trumbull, Richard Yuricich and David Dryer, and they are superb. So is Laurence G. Paull’s production design. But ”Blade Runner” is a film that special effects could have easily run away with, and run away with it they have.”

That might be the point, that the real beauty of the film, aside from the mysterious storytelling, that was nearly mythic in its absorbed fan analyses, was the creation of a place that didn’t exist yet in the world 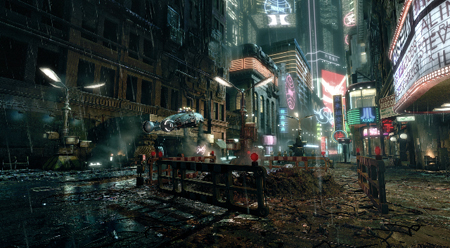 It wasn’t a perfect world — but technology had a place and a play in the emotionally evocative advertising drifting weirdly through everything — the misted and perpetually raining city. 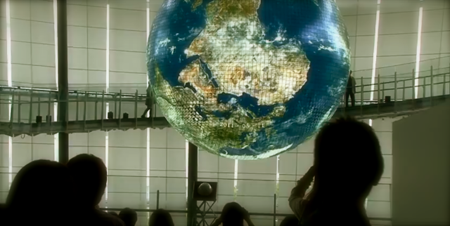 While the story unfolds, the engagement continues. While the earth turns, the sphere moves. While the long night rains, the pixelated blimp passes through the cityscape.

Working in the world of product innovation strategies, as well as film and production marketing, and finally the synchrony of brand and storytelling, these evincements come to me fluidly — it might be said that I’m reaching to make connections.
But, it’s true, I’m always reaching — for what’s out there.
And what’s right here.

The Naming of Things THE MYSTICAL ROOTS OF THE GATHERING OF NAMES. An ancient principle of voice struggles in the subjective empowerment of words -- as vessels for improvised ideas -- and the named premise of ideals. I've written in the past about the idea of the thing.  The very name: thing, is something that…

WHAT IS OUT, WHAT IS IN

THE PORTALS TO SEEING SOME ONE WAS TALKING TO ME ABOUT WINDOWS. Actually, I was looking at old windows and wondering about what's been seen between the seer and the sight beyond. These were old windows -- that were removed from houses. They were being sold as recycled objects. All showed time, wear and use;…