I had written to Eartha Kitt about her love of nests — and my fascination of nests and their building — hornets and wasps in particular. http://tim.girvin.com/Entries/?p=328

Interestingly, she wrote back.

And my Mother had offered another note about the concept of biomimicry — how design might be extended to that visioning, drawn from nature. Dawn Clark, AIA, LEED offers this range of thinking, which completely surprised me, given the inventive character of the detail. But then again, she’s always surprising me — what she knows, what she’s thinking about…? 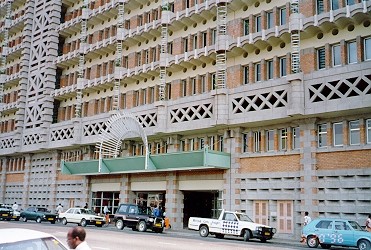 The extraordinary Eastgate Building in Harare, Zimbabwe, is just one example of sustainable architecture that uses dramatically less energy by copying the successful strategies of indigenous natural systems. The building – the country’s largest commercial and shopping complex – uses the same heating and cooling principles as a local termite mound. Termites in Zimbabwe build gigantic mounds inside of which they farm a fungus which is their primary food source. The fungus must be kept at exactly 87 degrees, while the temperatures outside range from 35 degrees (f) at night to 104 degrees (f) during the day. The termites achieve this remarkable feat by constantly opening and closing a series of heating a cooling vents throughout the mound over the course of the day.

Architect Mick Pearce used precisely the same strategy when designing the Eastgate Building, which has no air conditioning and virtually no heating. The building uses less than 10 percent of the energy of a conventional building its size. These efficiencies translated directly to the bottom line: The Eastgate’s owners saved $3.5 million on a $36 million building because an air-conditioning plant didn’t have to be imported. These savings were also realized by tenants: rents are 20 percent lower than in a new building next door.

What can be learned, by seeing??

Re: NYTimes.com: What's Black and White and Made in Queens?

I was talking with someone about luxury, history, making...and the hand -- and it came forth, again. Marty Wikstrom, I think it was her. I suppose, really, I've talked to a lot of people about this. Robert Polet. François Pinault. James McArthur. Claudia Cividino. Dawn Mello. David Yurman. Marvin Traub. Ian Ginsberg. Lorenz Bäumer. But…

http://tim.girvin.com/Entries/?p=337 Kuensel Newspaper On-line Article Link ----- At the request of editor Dasho Kinley Dorji, Editor in Chief, Kuensel, Thimphu, Bhutan ---- I recently toured Bhutan. And it was a long-held dream for me. Some 40 years earlier, in teaching classes on design, calligraphy and illustration to support tuition in college, I referenced some imagery…
We use cookies on our website to give you the best experience on our website. By clicking “Accept”, you consent to the use of ALL the cookies.
Do not sell my personal information.
Cookie SettingsAccept
Manage consent