Okay, so I’ve been busy, and trying to fill out the remaining days has taken time. Days, right?

Like a week or so, really. And there’s more, too.

More learnings — and of course, so much more learning that it took me a couple of daze to actually compile the thinking and overview. But good things are revealed in time, right? It takes a while to gather and frame the learnings — then advance them. And get them on digital paper.

I was talking about the learnings for this event, what — really — did I gather? Passion, openness, a willingness to share, and the conductivity of human connections — and the openings to new relationships. We’ll see where it all goes, since officially, I suppose, I will be out of the loop for TED — since I’ve not signed up for this coming (next) year. Why sign if you’ve not been — or moreso, if you’ve taken three years to get to the first one. And that’s how long it’s taken. Since I first signed up and paid for it, it’s taken me three years. First I was called to Seoul, with the GS | Retail team to work there; then, second, I was working in Jakarta, with Callison and PT Mitra / Seibu. So I missed out. Time tells; time travels, strings unravel.

The coming year is based on membership — and it’s pricier. So I didn’t think I could go, without more clarity as to how it works. And being in the main hall, where the lectures occurred, as opposed to the simulcast lounges, was startling — the clear potency of the connections with the speakers. And being able to meet nearly everyone that I heard.

But I’m curious, if you are no longer a member, then what — are you out of the conductivity, the electricity of the connections? Will see. We’ll see.

What happened, then — the highlights of three? I won’t offer it all — other d.logers have already filled up page after page of intricately detailed reports. I’ve got notes from people saying, “hey, read my blog!” Like, whatever. But what presumption then that this might be of interest to others, I’d wonder?

High lights. Lights that are high. 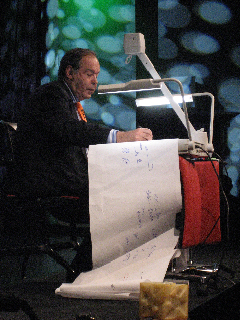 a leader in thinking, whose thinking was — to my impression — so obfuscated in “thinkingness”, that it was hard to tell what he was thinking about. It was either lateral or parallel – to what, I don’t know. Others agreed — including the interrupter Chris Anderson, conference leader. But, if you look at a sofa and think of it as a bed, then…there you go. Sofabed? I liked his handwriting 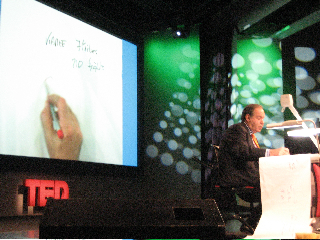 resentation method — kind of old school, but cool in a way.

Emily Oster, Daniel Coleman and James Randi had their rounds. What of that? Emily’s work on the transience of AIDS in the context of commerce — that, for example, trucking and commercializations lead to pathways that expanded the insurgence of pathology. She’s working deeply in there, but somehow her analyses seems to stem from that: analyses. Not being there. 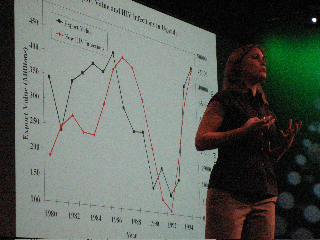 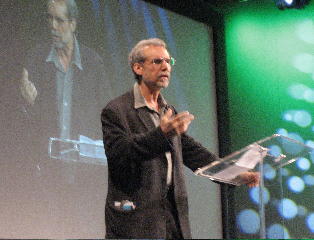 really spoke of love and our ability to connect with eachother; the premise, simple. Love the richness of our connections | humankind – reach, all the time, every time. Because we are running out of time. Don’t stumble over those who reach, mind fully act. 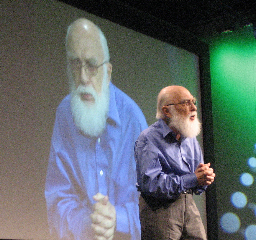 Finally, Randi reached to the notions of the god-less, mystery-less universe – his foundation focuses on disproving anything which might twinge of magic and illusion, mistruth and deception — to the psychic realm of imposture. Not sure, what’s there. He surely cares not for anything that suggests another “side”…Nor the binding trappings of religion. Faithless is he.

Let me allude to those that meant something to me.

Sometime back, I didn’t really know who 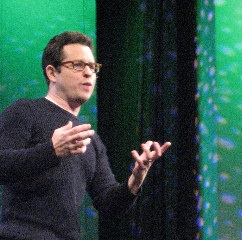 JJAbrams was. Why, the name — JJ? What’s the history, there? First, there was Alias; then, there was LOST. But my call came to working with Tom Cruise and the team at Paramount on M:I:III. He directed that. But what was the calling that really reached to me? It was his sense of mystery — the box, and the box, and the box — and the progressive inversion of the story, the mystery unfurling deeper and deeper and deeper. There was something wholly empathic in my connection with JJ — and I did connect with him. I talked about how I’d never really even heard of who he was till working with Tom on M:I:III. And I talked about the magic mystery box. 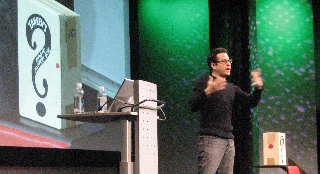 This was a lightning rod connection for me — the concept of the magic shop (in the Pike Place Market for one, NYC for another) with the box of mystery. What’s in there; it’s unknown. And that, to the symbolism of virtually all work is the point of excitement, the tipping point to connection. For me. I’d like to connect with him personally.

There was another striking mind — at least a mind that struck me. Jeff Skoll. And while everyone else in the universe of cool might know the founder of e.Bay, I did not. But his ability to take the cool of that, and mix it with the cool of this — Participant and the Skoll Foundation was a remarkable sprint of mind and talent. I liked him and connected for a moment. What has he done? An Inconvenient Truth. North Country. 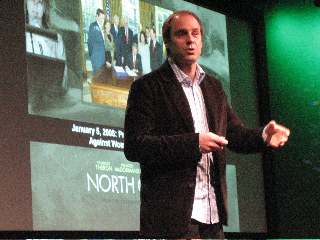 Syriana. Statements that, as well, proffer cultural savvy and integrity. It’s where magic and political power come together. That amalgam is a hardened alloy to produce.

Deborah Scranton, filmmaker and director of The War Tapes, which is a filmic rendering of lives in a conundrum — the puzzlement of war; but a documentary — more, and a convergence of the two. What’s the difference in my mind? Film is — let’s say — moving imagery on sliding sensitized plastic. Might be good, a story — might be something else — but it’s a beginning. It’s the plastic foundation. Film moves. Documents in film seem to try to push an impression of story, in the context of truth. True? Whose? For every human there is a truth, and what truth is told is powerful if there are listeners and seers. Scranton’s empathy is powerful and her tears bring things home for the listener; those who saw her.

There are others. Game designer (The Sims) Will Wright, 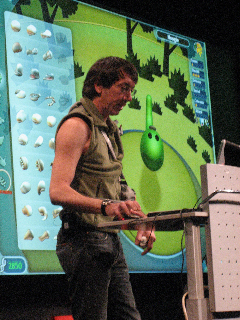 elaborately doo-hickeyed in an arm brace and looking like the lounging reject from a road warrior set up, has created a new godgame: Spore. He shared some of it. In this one, there’s the chance to create your own new world — and poison and destroy it too. I found his own curiosity about HIS game, his kind of meandering wander around the worlds in creation to be amusing. Nay, slightly enchanting. I do wonder sometimes after my malleable gullibility — I’ll “get into” things, simply because they are, well, captivating. 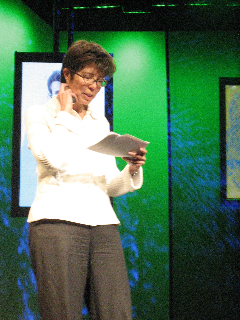 I reached to her earlier in the game of TED, and found her to be kind of shy, but lovely in her own careful and thoughtful way. Diller | Scofidio | Renfro / Architecture NYC. 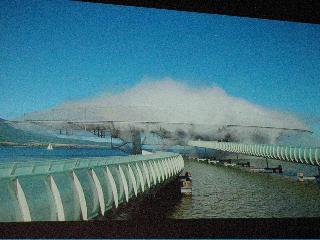 herein belies an intense way of thinking about things that girds her work, as well as the character of her personality. Here are some visions of her work that I found captivating — then again, I’ve found the work of her group to be endlessly cultivating and magnetic; her experimentation to be lauded. 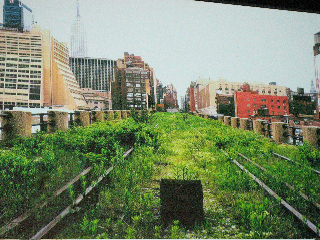 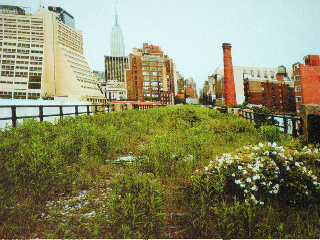 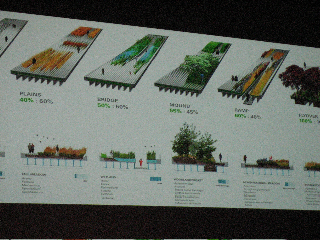 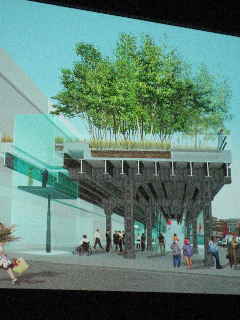 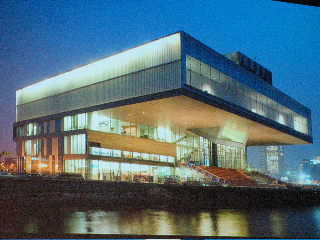 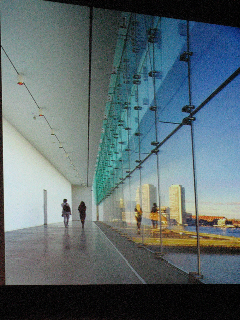 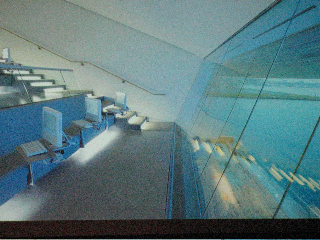 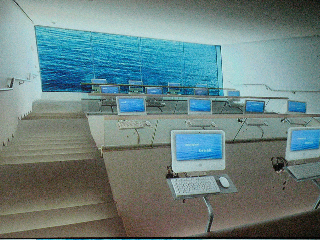 I’m going to NYC and I’m hoping to see her. Would like that. Her office is just down the street from mine. But, my work might not be to her standards. Will see. Will. See.

Paola Antonelli — what can I say about someone who’s running the Architecture and Design collection at the Modern in NYC. Lucky, for one. 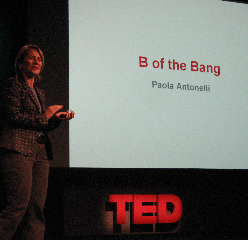 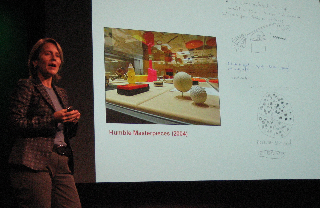 But charmingly NOT self absorbed or arrogant, for two.

I liked the sound of her music, yet never listened to the words. Then, in getting closer to her, speaking to her, I learned more, reached in — found.

I wrote this for her. 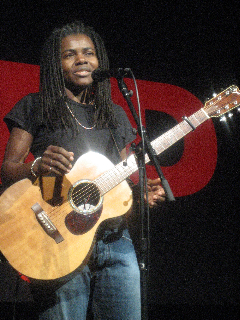 There is that: the new
listening to some thing
heard, but never known.

And in that soul, fueled
register, a tremor that
broke my heart, and

leveled the sight of hope
in that journey that we
all make, trying to get

somewhere, newly found –
another discovering, of
the further shore of love.

Listening, I find again
that, in your music, that
moment when the heart

first opens, and there you
are, listening a new…Way.
Found anew, that space in which 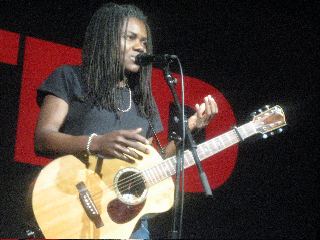 Thank you — for Tracy Chapman.

What a glorious woman is she, Tracy.

And there was a big party. And it was interesting. But I didn’t stay long. Liked the DJ and video production. 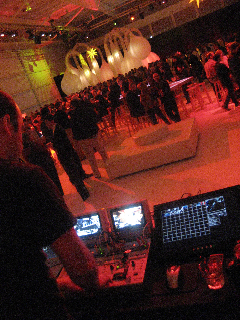 What’s next, Girvin? Virgin?
—-
Yes, being a virgin is about being open to that which is next…

Speaking of which, the last day at TED will be on the Girvin d.log: VIRGIN.

Where there's smoke, there's fire. I've always been a lover of fire. And smoke. It's a family thing. My father is a pyrophiliac and he got me started in loving things that are on fire. Not in any sense of destruction, per se; it's more about the beauty of the flame. Like the way a…

Sometimes there's a sense that we look at a brand one way, and there's a potential for it to be tipped another way; and that can be a good thing. We need to be ready for that, mind full of tipping spaces that will transcend or evolve expression to a market. But I suppose that…
We use cookies on our website to give you the best experience on our website. By clicking “Accept”, you consent to the use of ALL the cookies.
Do not sell my personal information.
Cookie SettingsAccept
Manage consent