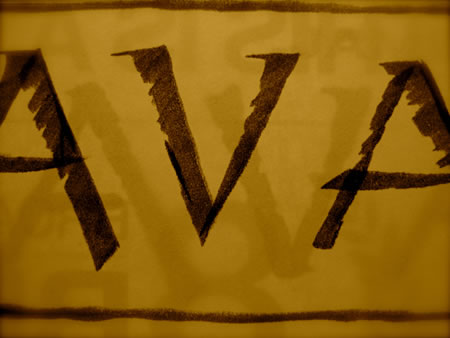 Early counsel: the strategy on brand identity, for one of the best motion picture brand developers in the world.

A number of years, back, I had the opportunity to work with James Cameron and his marketing team on the conception of the Abyss. That being, in particular, the branding of the film — in identity — for theatrical marketing and distribution. The logo. Bear in mind, that any process in identity development for films is about collaboration, the studio, the ad agency, the director, the stars: the team, in the submission of literally dozens (maybe hundreds, sometimes) to the tuning and treatment of the final title. We go there, work there, create ideas. 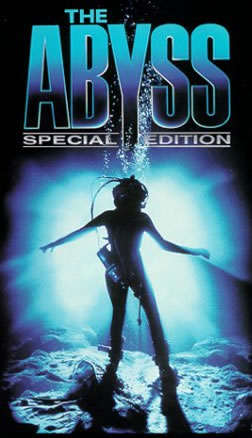 Logo design for films
Girvin has a particular reputation as designers to the theatrical marketing place of advertising communications. It is, for one, long-running. My first project was working for Francis Ford Coppola on a film proposition then referred to — by him — as “Apocalypse”. Later, “Now”. That call came in a strange string of connections. He had seen some drawings of mine in a magazine that focused on type / type design / type founding and the newly emerging world of film-based typographic presentation. The time — the late 70s. And sometimes in offering classes, I’d create demonstration banners of calligraphic, even historical or paleographic treatments of the alphabet. These signature drawings of alphabets became a tool to manifest the concept of the legacy of the alphabet as being a series of “movements involving touch”. They were published in the magazine U&LC — founded by Herb Lubalin, who I met in NYC, during my early years there. Indeed, the heritage of teaching drawing and calligraphy, during my years at the Evergreen State College, and elsewhere — the vast range of the history of the alphabet — is but a sequence of variations on an alphabetic series of markings that represent the spirit of an idea, a sound, a pictographic symbolism of form and content, expressed in the textual, gestured rendering of thought. Coppola had seen these expositions and called for me to offer ideas about the logo of his film.

That heritage continues in the partnering with dozens of studios, celebrities and directors to act as a kind of specialized design agency focusing on creating highly customized logo treatments. Girvin has been involved, over time, in working on literally hundreds of films. Interestingly, we are perhaps only one of a handful of specialists in focusing on this “type” of solutions for the motion picture industry. All of these treatments are made by hand, individually analyzing the nature of the story, history, context, production design and how it might be presented as a keystone marketing element in theatrical advertising.

That tradition finds itself manifested in the construct of the creation of visible identity in much of the work of Girvin’s communications and marketing practice. The issue is the spirit of literally “lustrating” the making of the culture of an organization “shine” in the presentation of their visualization to community. Our approach — though entirely artful and hand wrought — focuses on storytelling and strategy: how to create, in the soulful art of the logotype, the spiritual manifestation of the story of the brand as a marketing essence of the story of the film.

The beginnings
James Cameron. I started working with Cameron on Abyss — merely as a kind of typographic stylist — creating solutions to express, in a single gesture, the notion of sophistication, technology and the yearning power of the deep; these expressions reach not only to the construct of undersea adventure that is at the heart of this science fiction drama, but as well, the depth of the psychic archetype of the explorer, venturing to worlds that are unknown and unseen, both unconscious in the spiritual character of the underwater world, laden with its own symbolisms, as well as the sheer terror and beauty of the deep sea voyager and discoverer of other worlds. 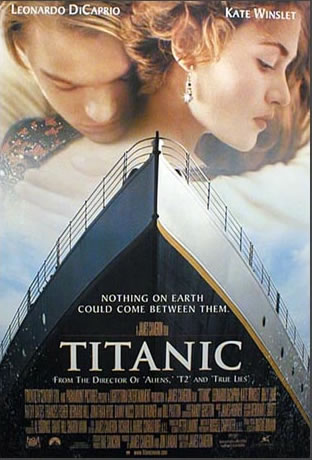 Later, our team worked with Cameron and Paramount Studios on the identity design programming for Titanic, a film that, during its development, was a production of almost unheard of proportions, not only in scale but in the majesty of its explication and finally the worldwide sales, representing a global audience of truly spectacular scale. 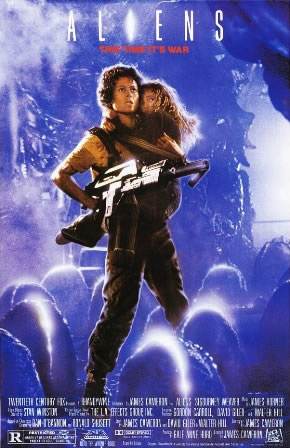 There were other films in the trajectory of Cameron’s youthful career, each time striding to new dimensions of storytelling, production values and technological applications and innovation, a hallmark of James Cameron’s exquisite imagination and filmic exposition. A venture into Alien territory, as well as his advancement of the Terminator saga that began as an earlier foray into the spacious technological renderings of a world gone amok in the takeover of humankind by a generation of machines, webbed by the monstrous Skynet and its murderous inclinations for domination.

Later, I’d heard about Avatar and seen some of the opening treatments of the concept of its visual identity. Early renderings and pre-marketing show reels expressed this in a font that to my thinking failed to appropriately reach to the innovation potential of his visioning. I wrote him — a series of letters — with ideas and pleas for involvement. And like my connections with J.J. Abrams, or Clint Eastwood, and Ridley Scott, sometimes these ideas will reach a fertile audience and lend themselves to involvement. However, I was never able to get through, to finalize a potential deal in supporting the marketing of the film. Ya gotta try…

My pitch related to the concepts of reaching into the archetypal otherworldly dreams of this story by reaching back into time, finding primordial renderings of the concept of the alphabet being seminal symbols in the consciousness of the ancient roots of alphabetic history.

To the notion of repeating history, here’s an overview of the approach that I suggested, based on the current variation of the film identity — founded on a font that was in play in the early work, a typeface — supposedly hand-founded — called Papyrus. 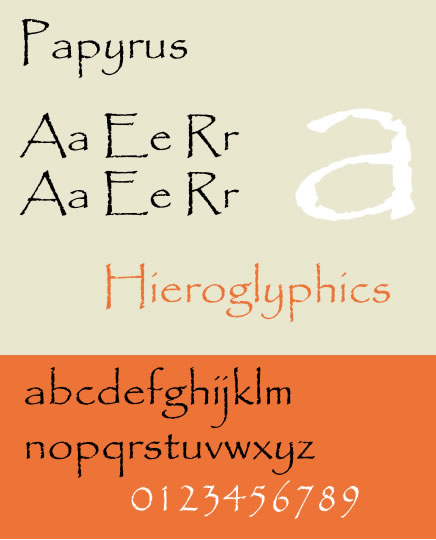 To my thinking, this treatment simply didn’t push the conceptual dimensions of the possibility as far as it could, with the enlightened — and paleographically denser — foundational roots of ancient (and otherworldly alphabet treatments) ranging back thousands of years. It might be suggested that the alphabet, occurring many millennia back, could be traced into the mists of time and even be drawn with the tools of the era, to suggest another parallel world.

These ancient symbolic scratching forms could be the heart of the story’s telling in visible form. What I’d suggested is that Avatar could live in that world — could come from that collectively unconscious range of markings, to evoke the spirit of the brand. No answer, but the following represents a play to that imaginative visualization.

To the nature of exploring historical roots, part of Girvin’s legacy relates to fluency in the history of the alphabet. And the inspirational route of experience development in design ranges nearly four thousand years back, to the middle eastern levant, in examining the primitive strikes of the form of content. This grouping could relate to the essential beginnings of the alphabet in the so-called Proto-Sinaitic forms of the letter. 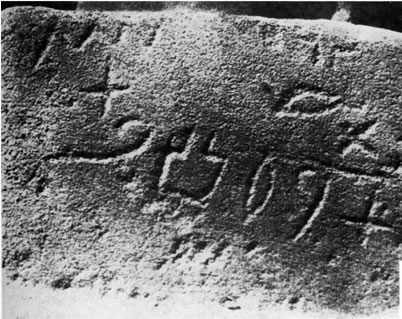 Simple, carved or “scarred” scratching in various materials and early writing materials, such as — noted above — the most ancient form of Sinaitic script, carved in stone — and later, the cleaved layering of papyrus strands and sheathing in the earliest creations of paper. From the traditions of trade, commerce not only engaged in the exchange of objects, but as well, writing — in fact, most writing decipherment comes at the hand of translators finding documents of multi-lingual application, for comparison and interpretation. And aside from edicts and other promulgations of governing entities, many of these documentations are literal shipping lists or exchange orders. Perhaps the most profligate traders were the Phoenicians, who offered other forms of adaption to the nature of the alphabet — this sequencing showing the nature this transmission, from the earlier scripts to adoption by the Greeks, in their systems of writing. Part of this transmission, though essentially untranslated, relates to the markings found in a group of excavated scapula and bronze plates, from Byblos, roughly dated between the 18th and 15th centuries BCE. 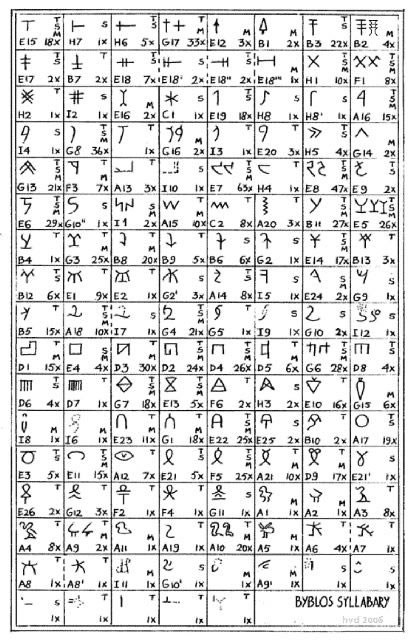 This grouping of signs — as well from the Phoenicians legacy — that lends character to the sequencing, in paleographic lineage, like this simple charting.

The simplistic drawing — literally — of this alphabet on the underside of this pre-Christian handled bowl is part of the principle that I’d proffered to Cameron, the idea of a hand-drawn symbol text, like the alphabet newly discovered — an archaeology of script. The later treatment of the evolution of both Greek and Latin calligraphy found their way to the geometrically rhythmic Uncial form, like this 4th century papyrus manuscript. 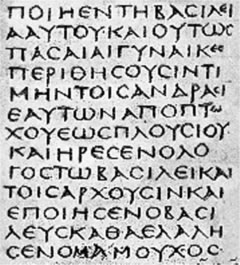 There are, of course, hundreds of scripted variations, influenced by the movement of ancient hands in places of antiquity. But without going into a litany of the study of the written hands of time, there’s another reach to be considered, the legitimacy of the tools in rendering. Here’s an exploration, then, of the classical techniques of drawing the logotype treatment of the Avatar font, in a manner that uses the tools of thousands of years back.

Exploring the idea of the hand-made identity
The original renderings, in reference, from Cameron’s promotion: 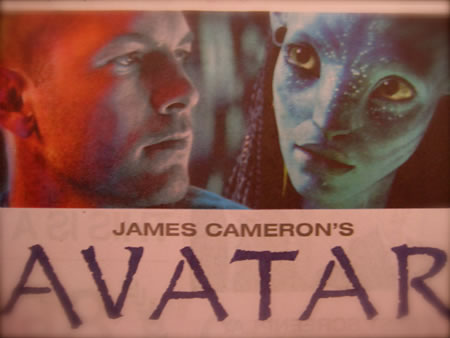 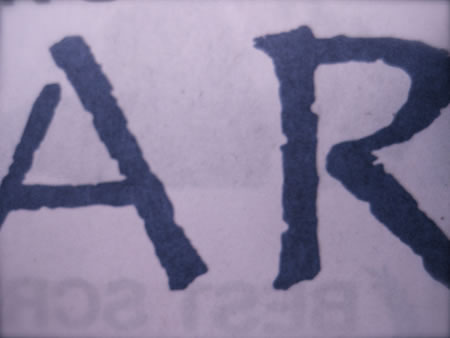 And another path in exploring the development of a modeling that relates to the hand-made, the roughly rendered, the authentic legacy of the otherworldly, classically generated treatment that I’d proffered — in pitching theoretical calligraphy — like the nature of our practice.

The tools of the trade, in play, plied: 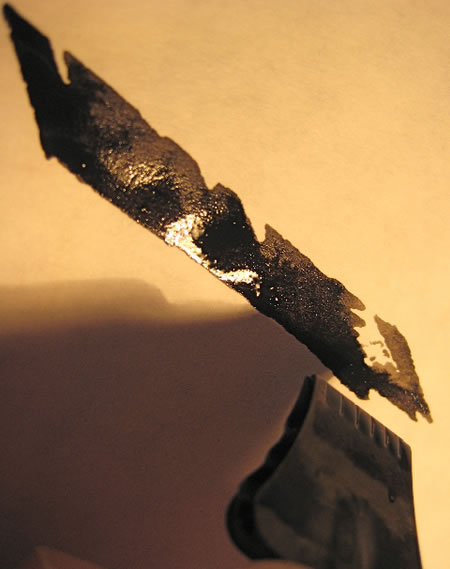 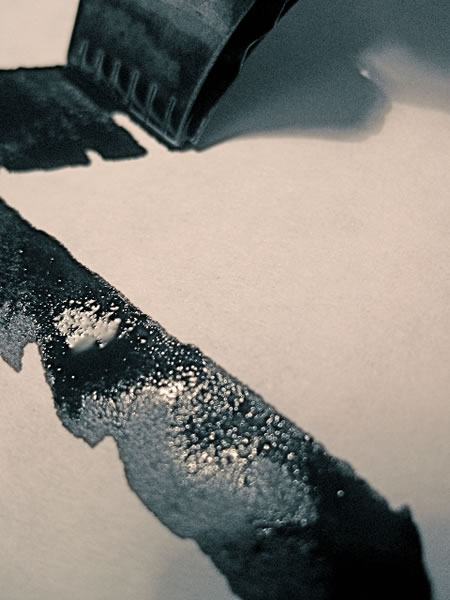 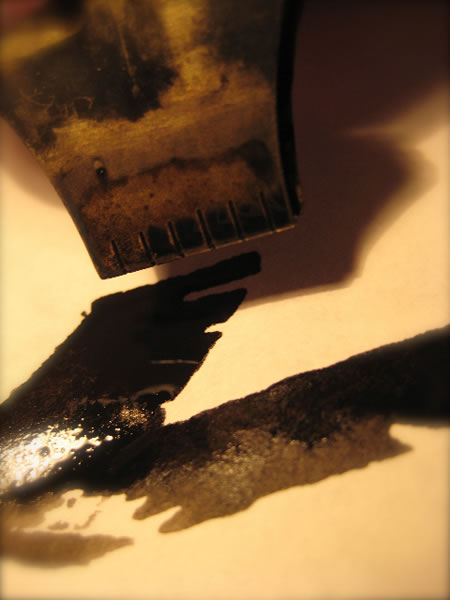 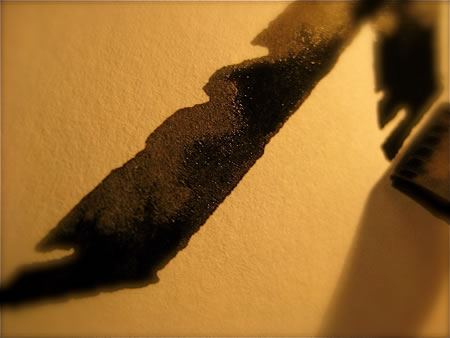 Toggled cocking of the blade for notched stems: 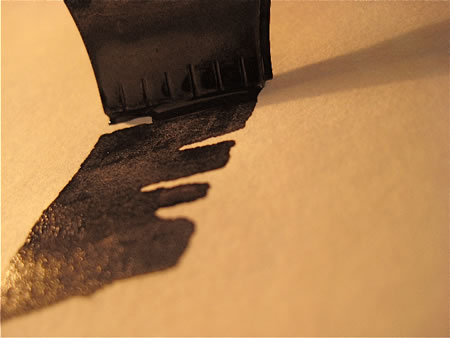 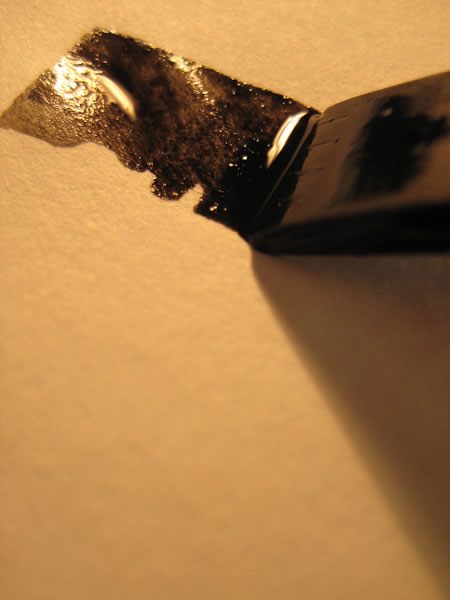 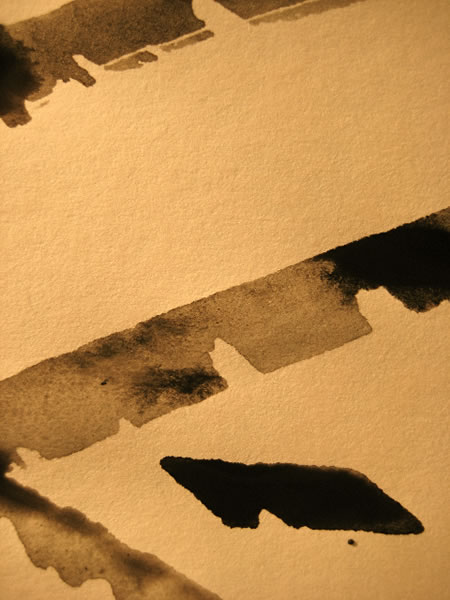 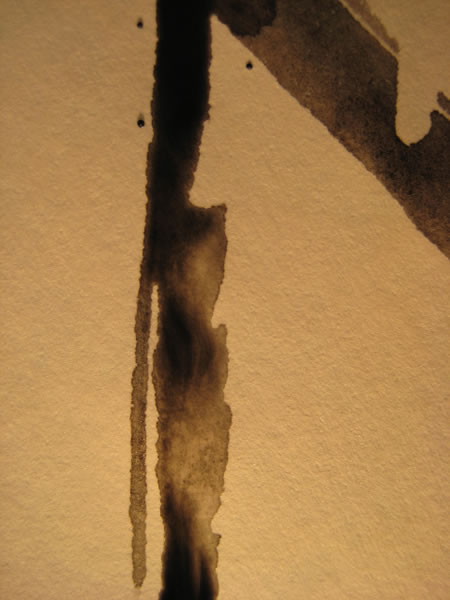 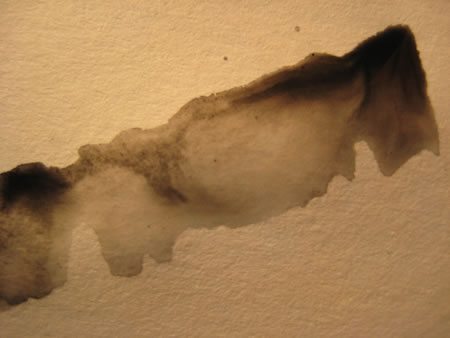 The sliced reed, an ancient tool — papyrus to the present: 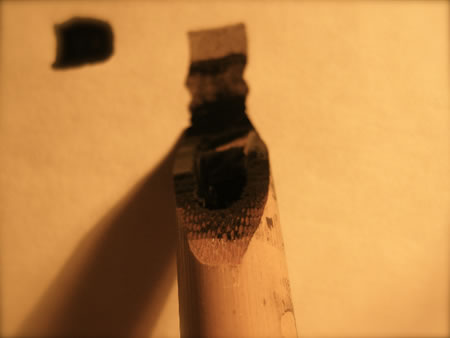 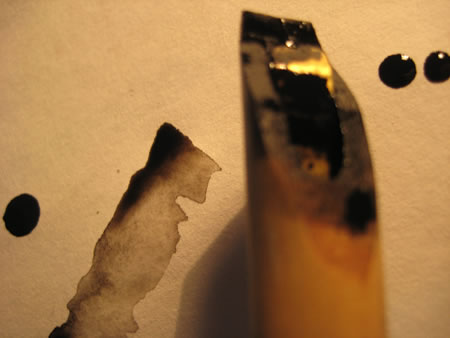 Exploring the sequence of letterforms: 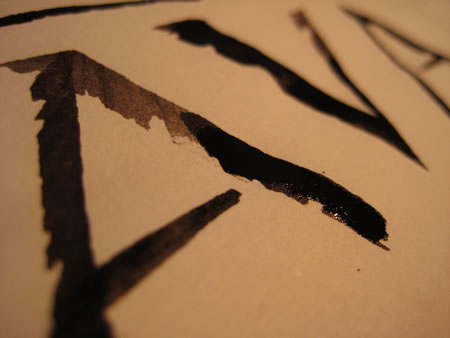 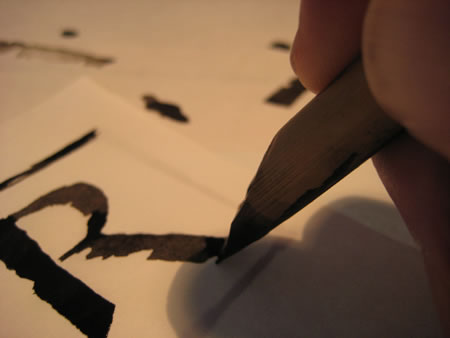 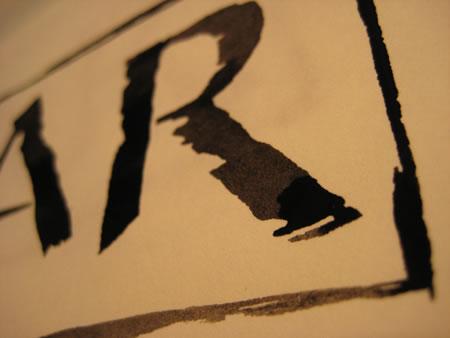 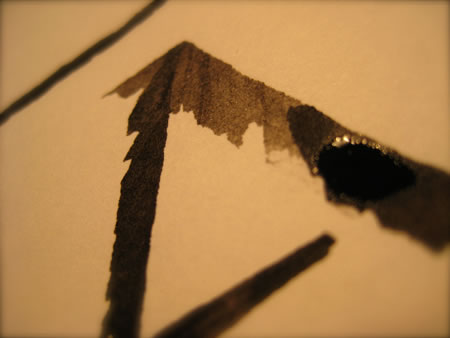 Surely I don’t presume to claim ownership of the Avatar marking (and I’ve tried, but can’t figure out who does), but these treatments represent an attempt, earlier, to reach to Cameron, in creating a rendering that is wholly legitimate — authentic to the legacy of the inspiration. I did the same with Ridley Scott, on Gladiator. David Fincher, Tom Cruise, Jerry Bruckheimer, Zemeckis, Leone, Zwick, others. 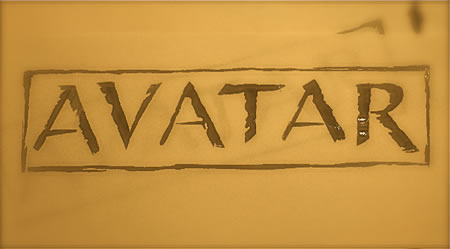 One inspiration, plays to another. And the story is continuously told.

The savoring of acceleration -- fast brand storytelling. Being one who is in the business of acceleration -- the development of conceptions that speed, to market, into community, audiences, guest relationships, client spaces and beyond, the idea of extraordinary pacing and planning organization is something that is a taste of living; it's how I work…

I CAN RECALL THAT IDEA, LAUNCHING, THE FIRST REVELATION OF VICE, THE MAGAZINE. A decade + back. It was my eldest daughter that discovered it, in a book shop -- she said: "Dad, here's something, you'd probably like this." And it's not so much that I'm a familiar to the practiced notion of vice, but…